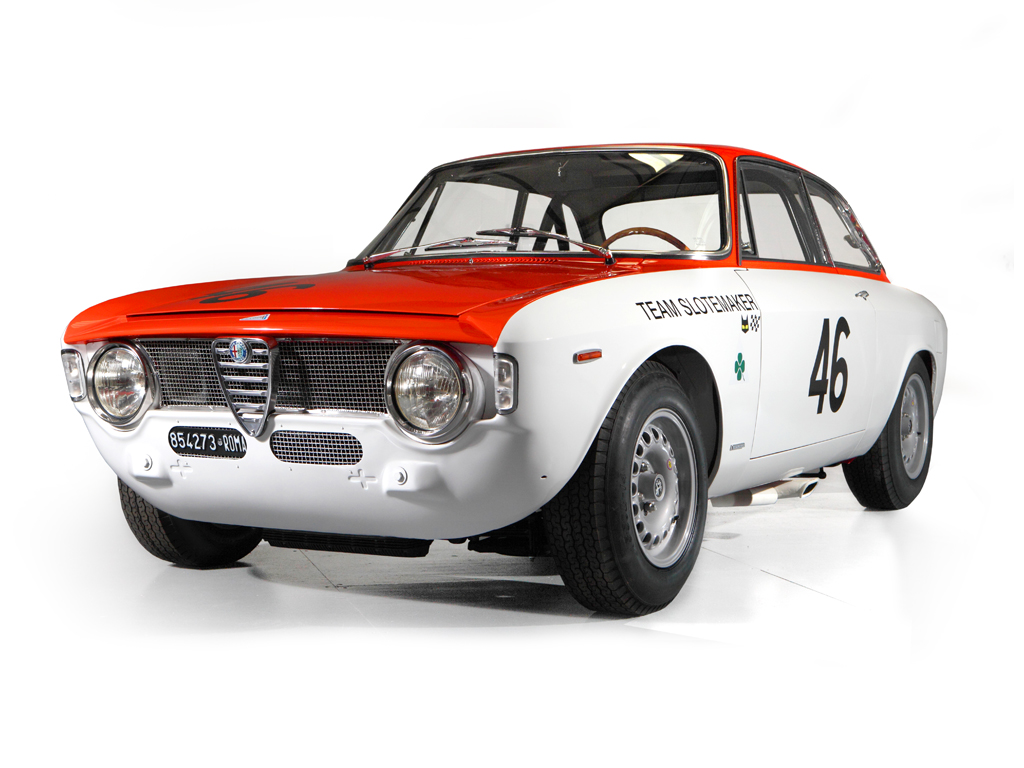 The restoration is complete with the car returned exactly back to its original 1966 Dutch Championship winning specification, down to every last nut and bolt and finished in the livery of the car’s first victory @ Zandvoort in July 1966 driven by young talent Wim Loos. The results are spectacular and the car represents a wonderful tribute to both Autodelta & Team Slotemaker in this the 50th anniversary year of the 1600 GTA! 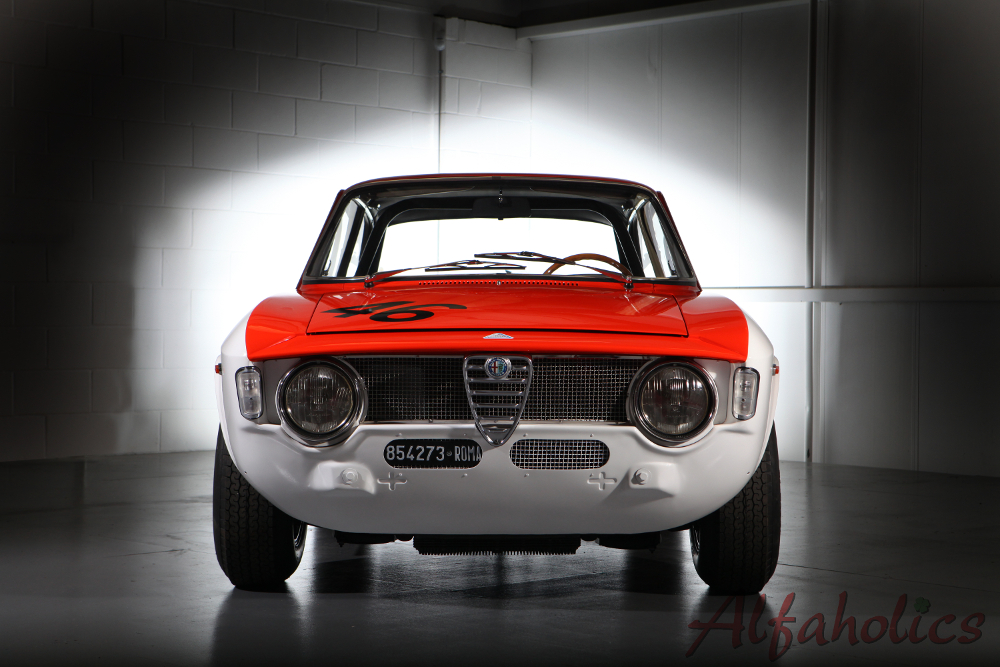 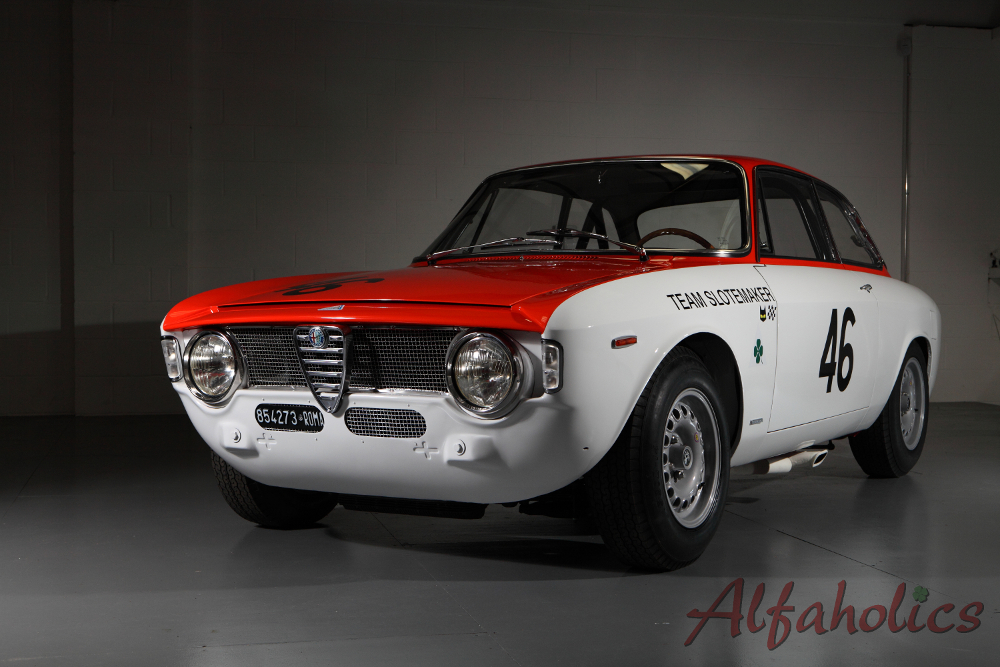 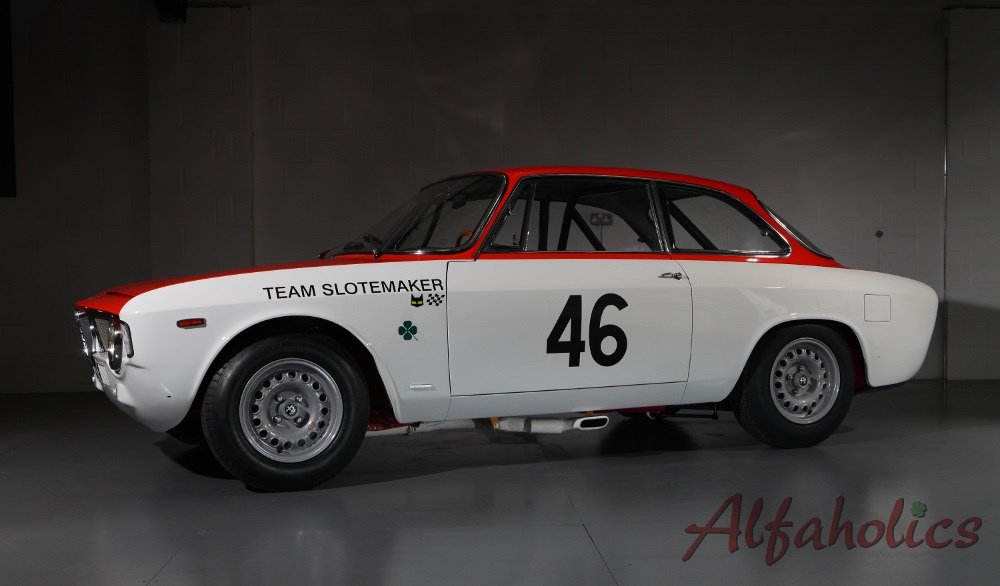 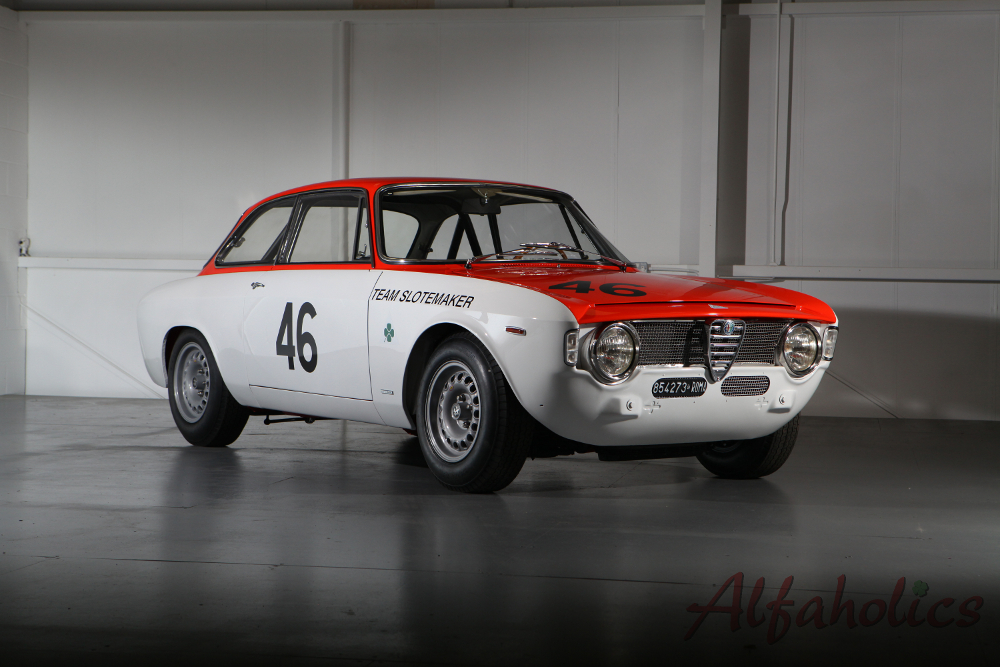 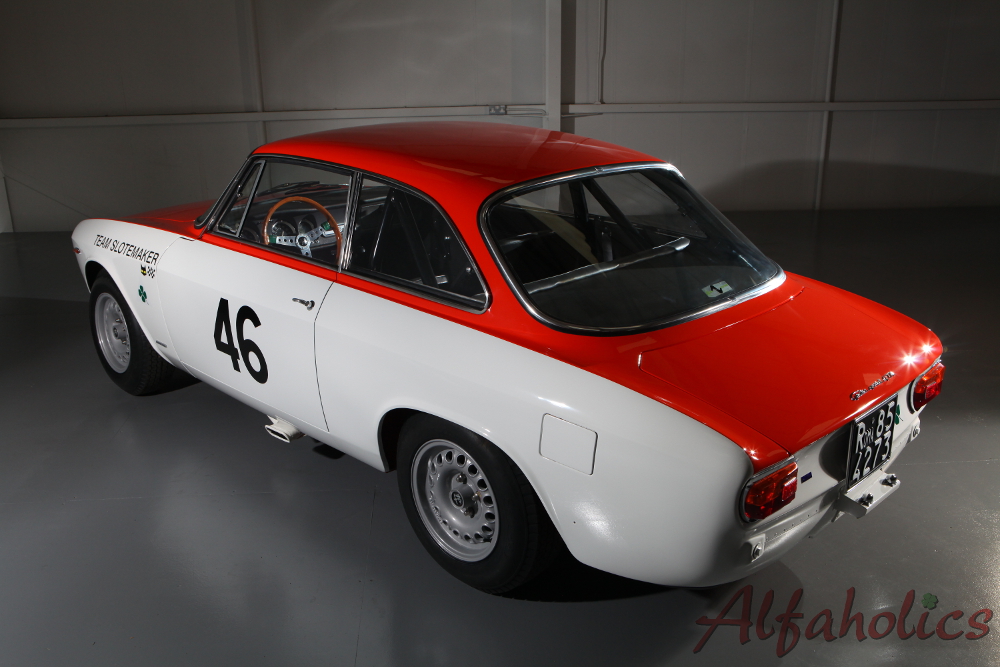 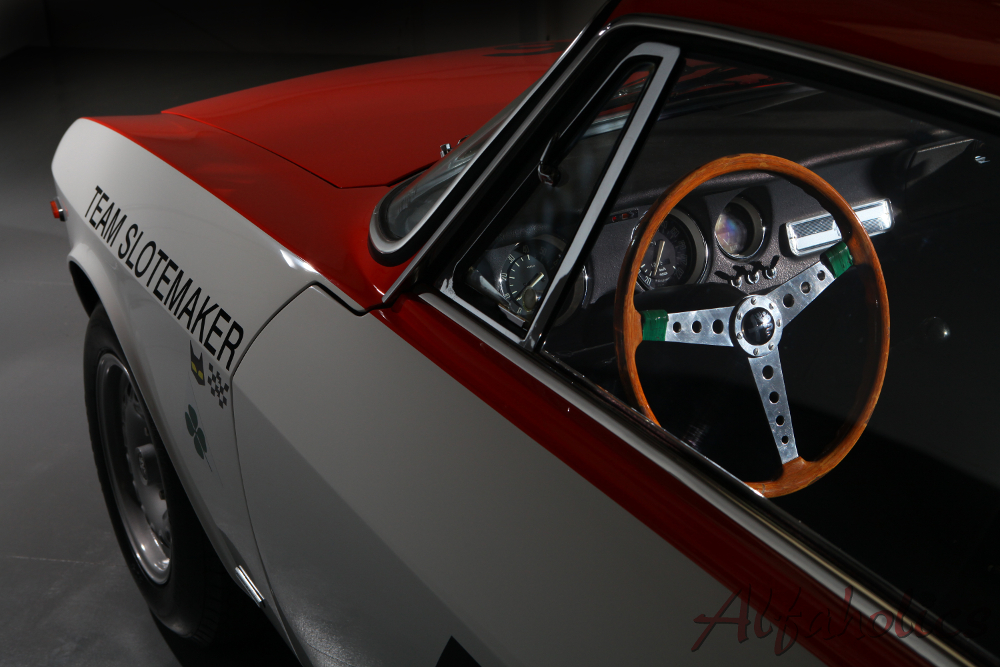 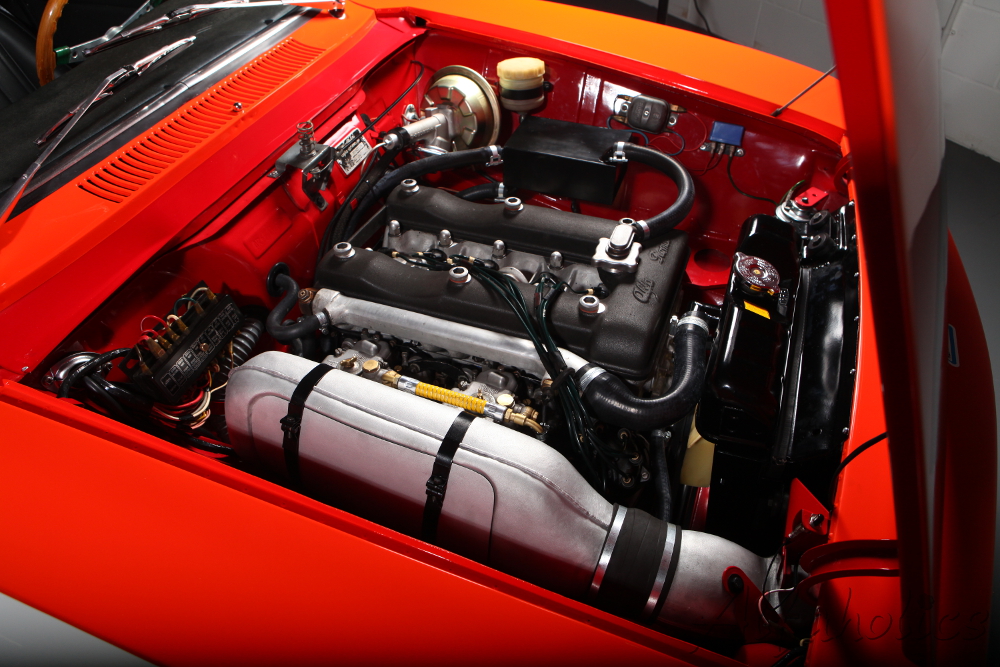 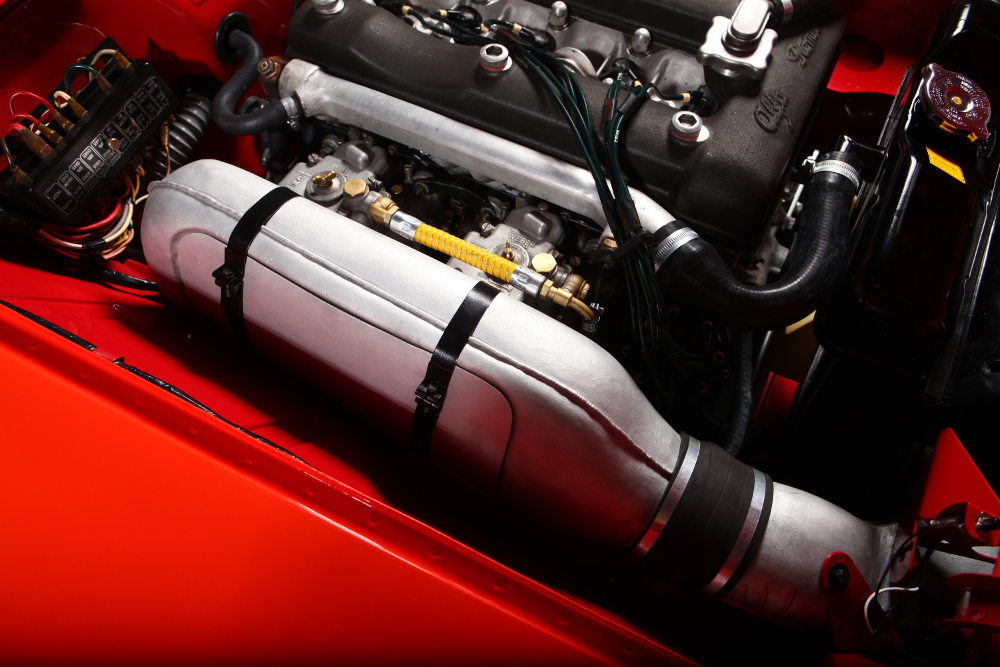 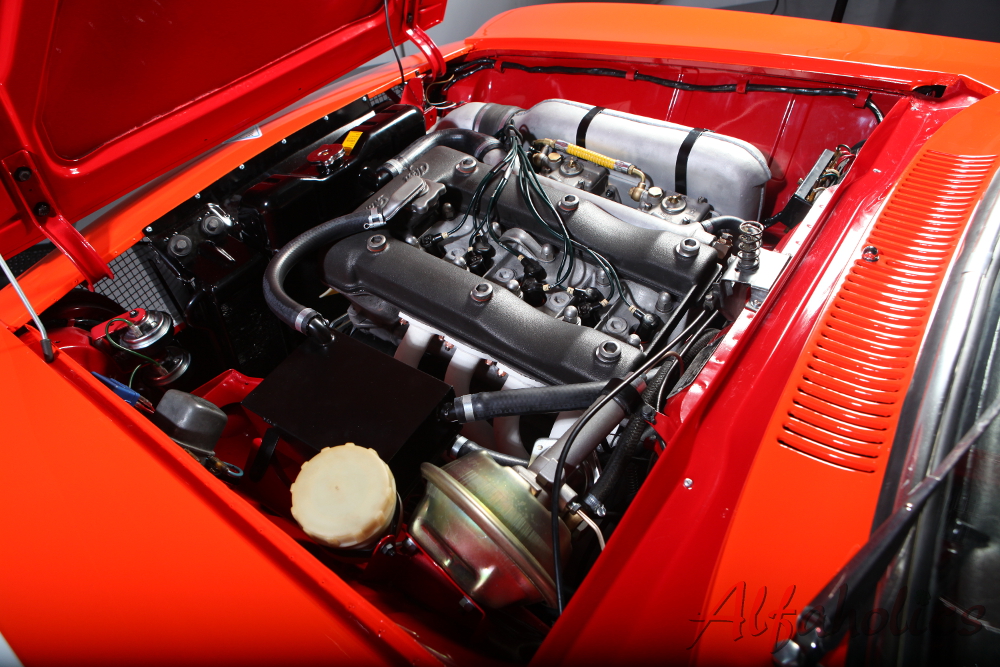 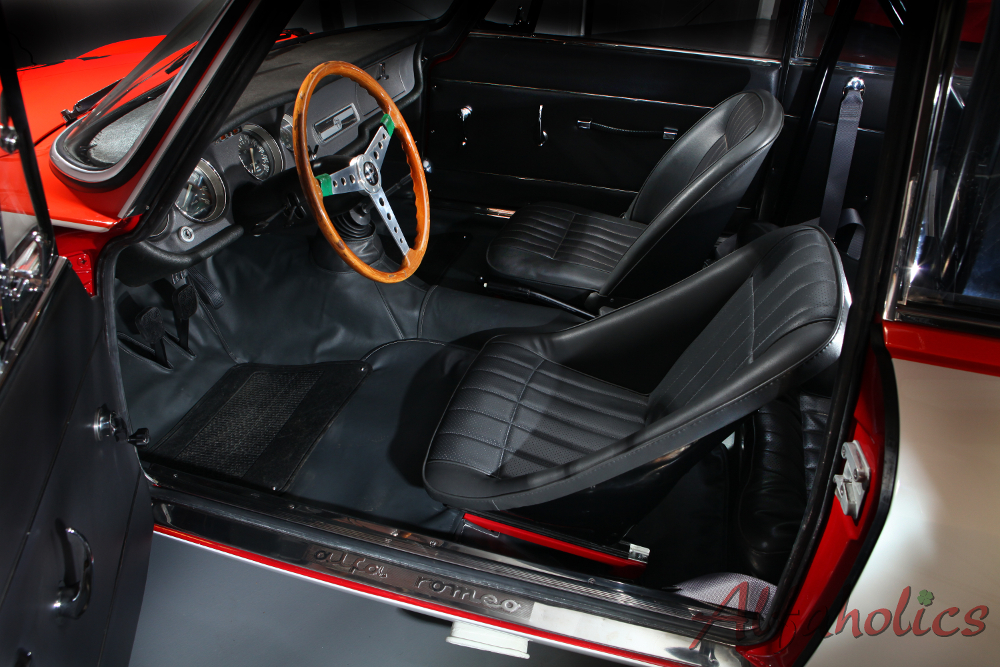 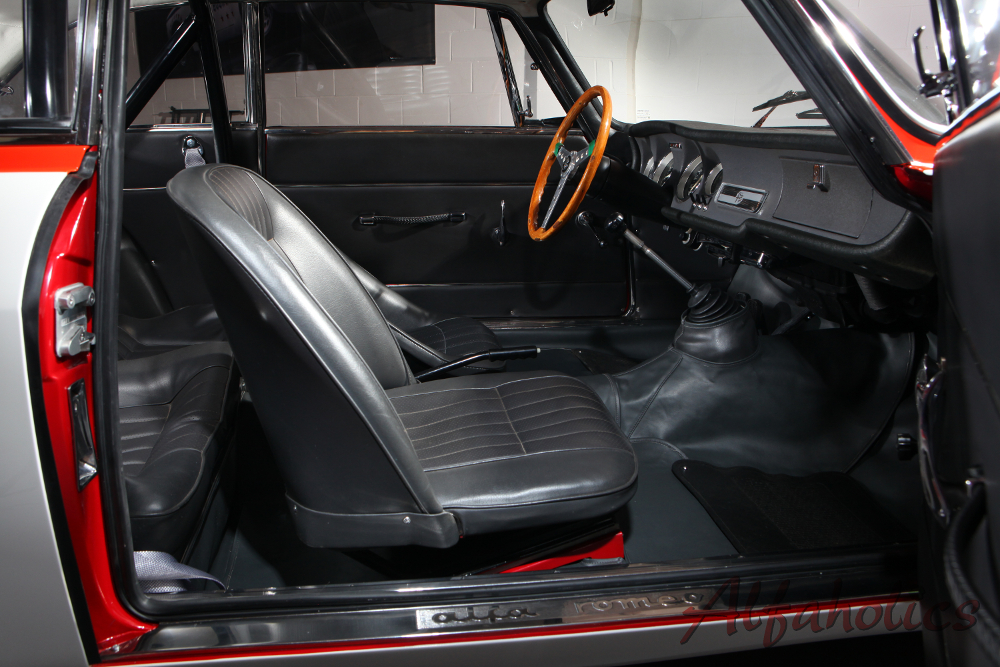 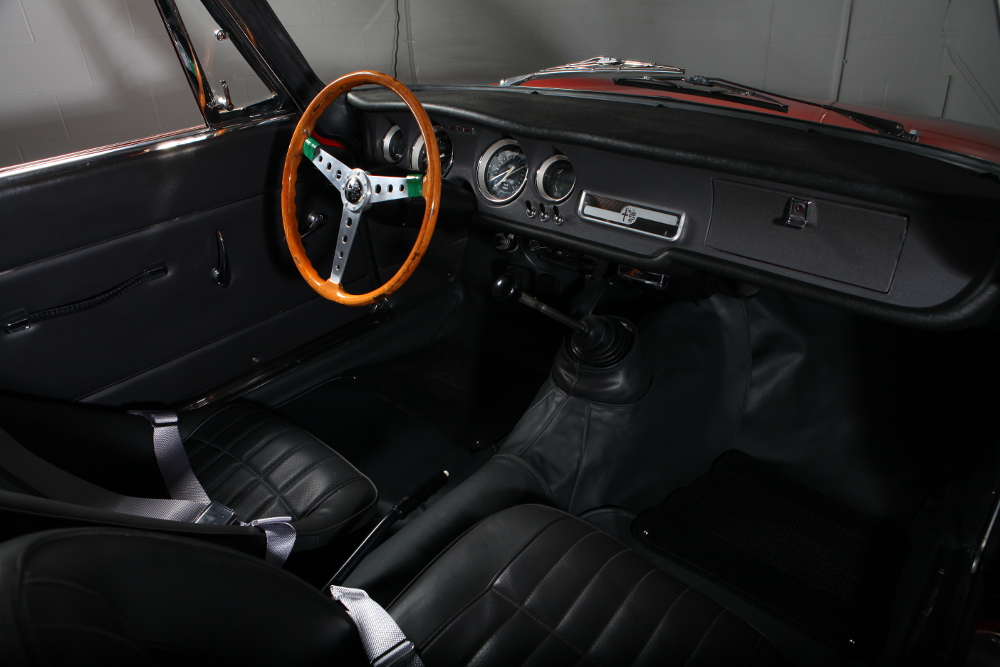 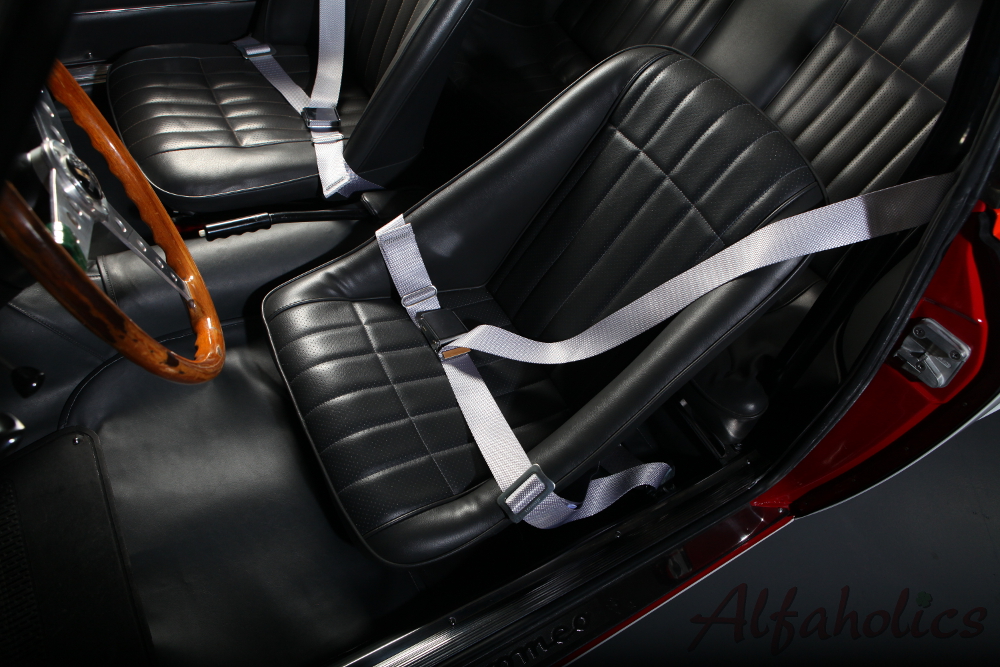 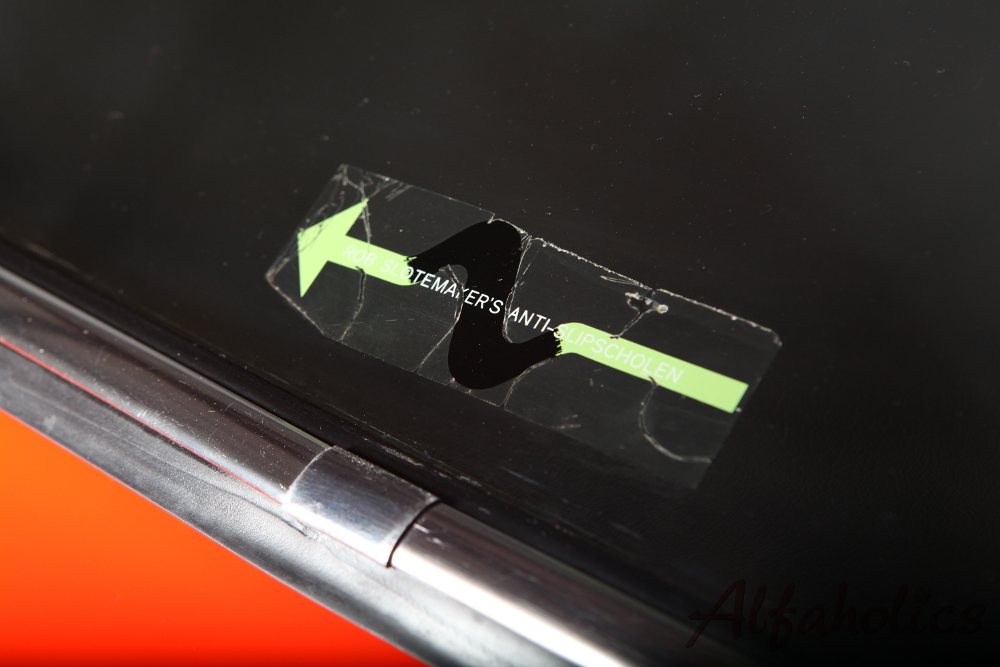 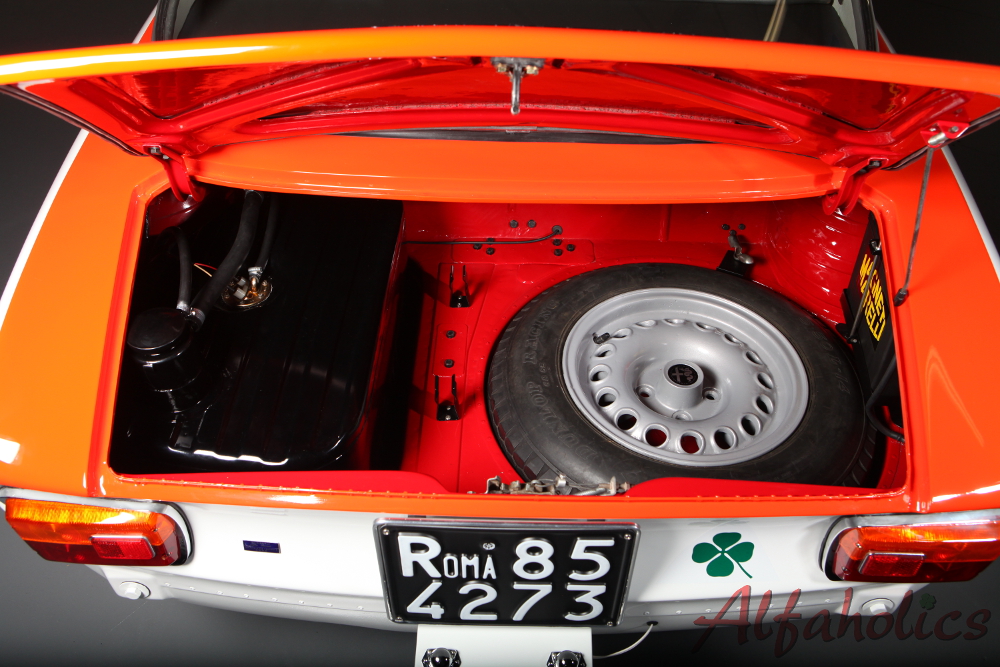 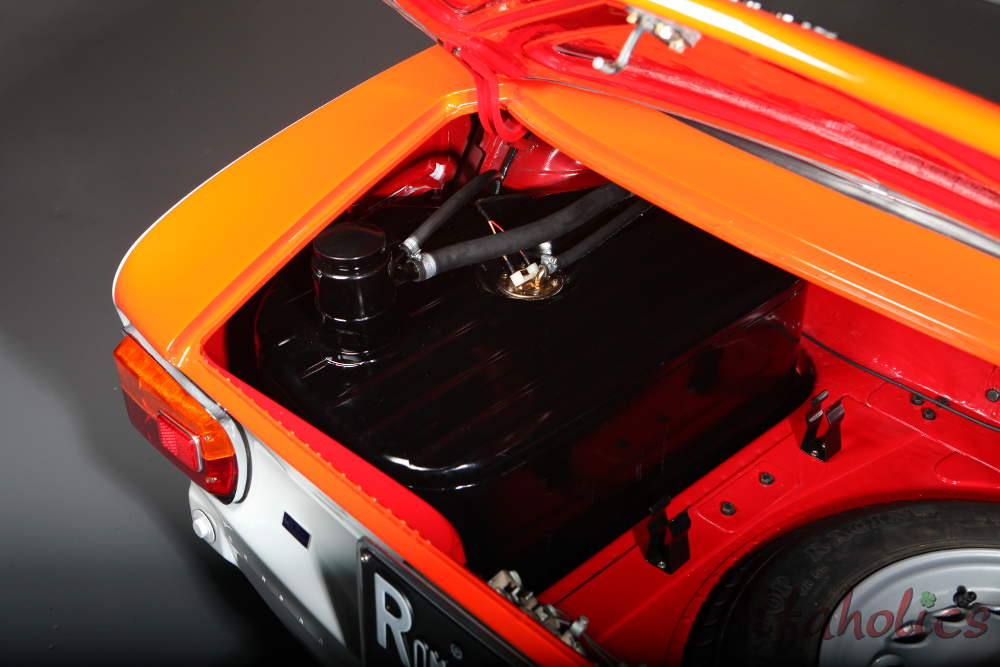 All the Autodelta castings have been sensitively cleaned and processed to remove previous heavy sand blasting damage and reassembled. We opened up the axle, fitted new bearings and reshimmed the crownwheel mesh.

The axle has been refitted to its original specification with Dunlop brakes, removing the incorrect ATE brakes which had been fitted later in its life.

We have retained the modified axle casing, although not typically how the sliding blocks were adapted to the cars, it has the original AD stampings on it, so is clearly the original component from the car.

All the major steel components and suspension members have been blasted, dipped and powder coated before being built up with all the specially re-coated original LOBO bolts and fasteners.

The first week of assembly has gone very smoothly, due in part to the car’s uniquely original and undamaged condition. Every original part has been checked carefully and either cleaned prior to installation, or restored where appropriate to return it to its original condition.

Nothing has been replaced for the sake of it, as this would remove the patina and originality of the car.

For example, the headlights and tail lights are the genuine factory-fitment first series Carello units which have been cleaned carefully, polished and re-installed.

The exterior stainless trims have been cleaned with ultra fine ‘000’ wire wool, rather than mirror polishing as we do with our GTA-R builds.

The foam padding in the inner door panels and 1/4 cards had completely disintegrated. In order to restore them, we carefully removed the original vinyl to allow the hardboard backing to be cleaned and re-covered with new foam before the original vinyl material was re-fitted.

As the restoration is to faithfully return the car to its 1966 specification in all details, this is not the type of restoration for our full wet flat ‘mirror’ finish inside and out as we do with our modern GTA-R builds.

The external paint is purely out of the gun with a light machine polish, much as it would have been in period, but inevitably to a higher standard than the original rush job to go racing!

We have developed a special paint formulation for painting the interior and underside of the car to achieve the correct appearance that Autodelta used, this is a dulled finish (not shiny) with some dryness to the paint finish in areas as well.

We also have been careful not to fill and hide original dings and marks in the internal panels and chassis parts – these are all part of the history of the car and must remain there as part of its racing career. As the car left the factory as a red car, we have painted the car AR 501 red in all the negative areas, with only the external painted in the famous blood-orange and white Team Slotemaker colours, just as was done when it was sent to Holland in 1966.

It was not easy to photograph the car inside under artificial strip lighting whilst showing the true colour, so we rolled the car outside as well to show a range of photos.

Removal of the non-original ‘spray sealer’ type rubberised underseal  turned out to be rather laborious. In a few areas it had been applied over dirt so came off with ease, but in most areas it proved very resilient and had been applied rather liberally in some hard to reach places! Getting it off the backs of the wings and in all the last nooks and crannies took much time!

Only once the sealer was completely removed from all areas could the steel chassis be media blasted, the aluminium body was chemically stripped back to bare metal and finished with special PU detailing wheels. All that work was, however, well worth the effort to get this Corsa shell back to its bare non-under sealed state.

Remarkably, only a couple of small corrosion points have been found which will be addressed next before paint preparation starts, along with some detail dressing of previous repairs made to the corners of the front floor pans. Retaining original panels by effecting local repairs, without changing complete panel sections for the sake of it, will be crucial to the maintaining the originality of this unique car!

Upon disassembling the car, we could see that the shell is in remarkeable condition with no visible corrosion and no evidence of any chassis damage.

We found some non-original fittings and screws in the shell, along with evidence of paint over-spray, confirming that the car had been repainted and partially restored in the past.

We also found that it had been undersealed at some point in its later life and in fact applied straight over the top of original Autodelta parts such as the sliding block brackets.

In areas where this underseal had been applied over dirt and grease, it was starting to peel off and it was possible to see where the missing underseal had been aerosol painted over! Inside the car, we found that the floors had also had a textured paint applied at some point.

To revert the shell back to factory specification, it would need to be stripped bare and painted correctly in its factory AR 501 throughout, before painting the exterior in the Team Slotemaker white & orange colours. We know from period photographs that the car was painted white under the arches, so the current red paint there could not be original. Where we did find the original red paint was under the front bump stops – parts which had never been removed during previous restoration works.

Soon after Wim’s death in 1967, the car was sold by Rob Slotemaker and soon ended up in America. It underwent a total repaint and partial restoration not long after and as a result, all obvious traces of its magnificent history and striking paint scheme were lost. Our customer had owned the car for several years and taken part in a few events but unfortunately suffered a number of mechanical issues, including a brake failure, which dented his confidence in the car. Having enjoyed his last Alfaholics restoration, he asked if he could send us his GTA for a thorough overhaul – with only the knowledge at the time of it being a 1600 GTA with many Autodelta parts fitted – nothing known of its famous history!

Once we received the car, the full extent of its Autodelta components were clear and it was certainly not just an average 1600 GTA! We researched its chassis number and confirmed it to be the 1966 Dutch championship winning Team Slotemaker car driven by Wim Loos. We then undertook further research to complete its history file. We  noticed small details which confirmed the written facts about this particular chassis number – the original Team Slotemaker sticker still in the rear screen and even the green thumb protection pads on the steering wheel matched exactly the pads seen in period photos we found. The odometer reads just over 12,000 kms which is likely to be genuine, covering its short racing career and then what seems to have been very limited use in America after that.

Reporting back to our customer with the amazing news, the decision was made to carefully and sensitively restore the car back to its 1966 championship-winning specification. Although the mechanical components are low mileage, they are still 50 years old and will therefore be dismantled and examined to see if they can simply be reassembled in order to retain the car’s extraordinary originality.

This GTA was originally supplied in Rome and was bought by Rob Slotemaker in the spring of 1966, along with AR 613099, to form a 2 car team in order to challenge the Dutch Touring Car Championship. Rob chose 613099 to be his own car for the 1966 season, whilst this car (AR 613486 registered ROMA 854273), was designated for a talented up-and-coming young Dutchman called Wim Loos.

Over the course of the 1966 season, Wim won 3 races with 2 second place finishes, which was enough to crown him the Dutch Touring Car Champion in 1966 at his first attempt. In 1967, his campaign got off to an even better start with 4 wins from 4 starts and he seemed again unstoppable in the Dutch Championship. Tragically, that summer he lost his life mid season in a nasty racing accident at the Spa 24 Hour event, where he was entered in a friend’s Giulia Sprint GTV.

His death was a tragedy in Dutch motor sport – a talent who seemed destined to reach the top level of racing, cut short in his prime. Known for his successes driving this GTA, the car was even used to take his funeral casket to the Church, resting on the roof as it was pushed down the town high street. The number of people present to bid him a final farewell is testament to his achievements and popularity. Several photos courtesy of “Collection Gijs van Beusekom” 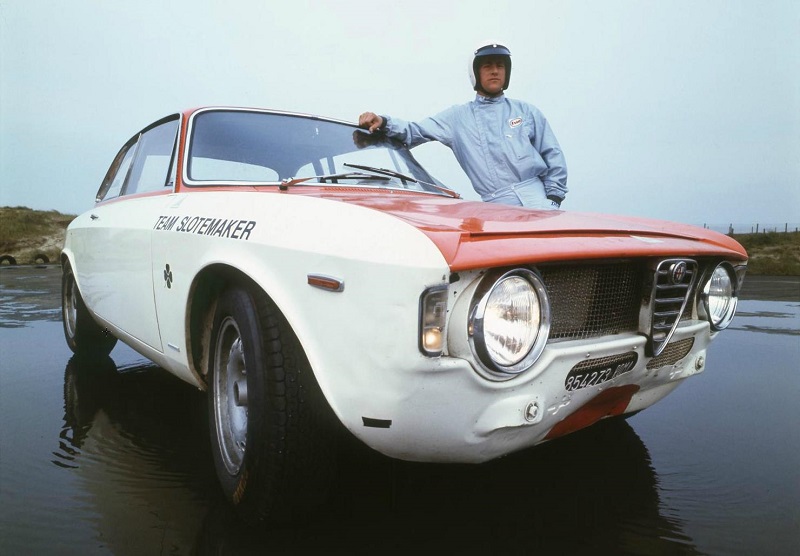 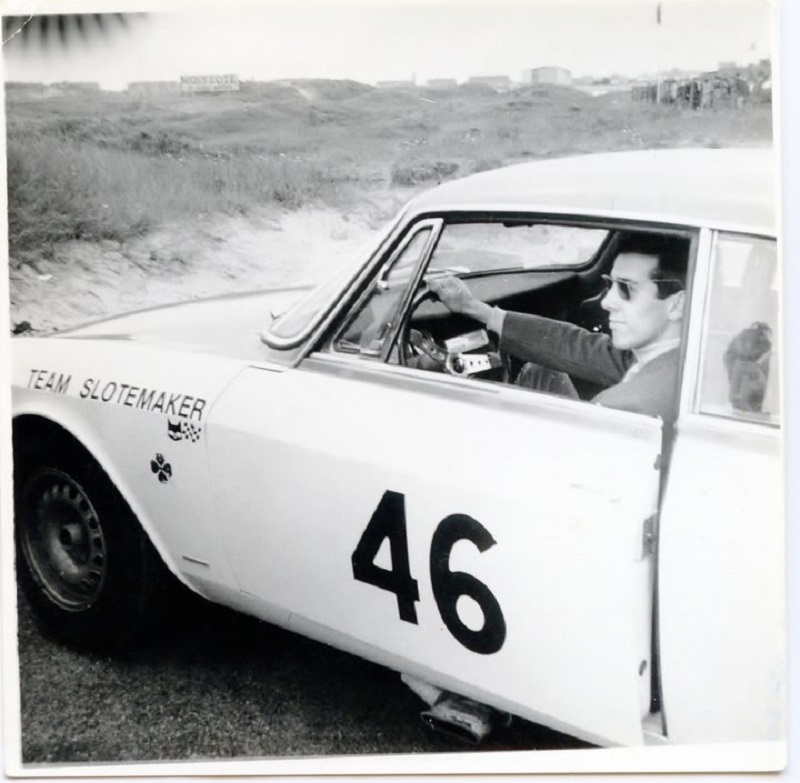 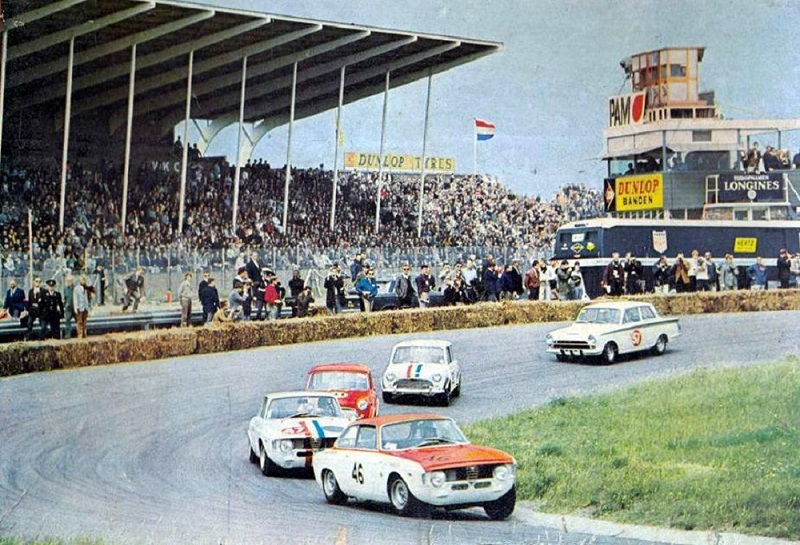 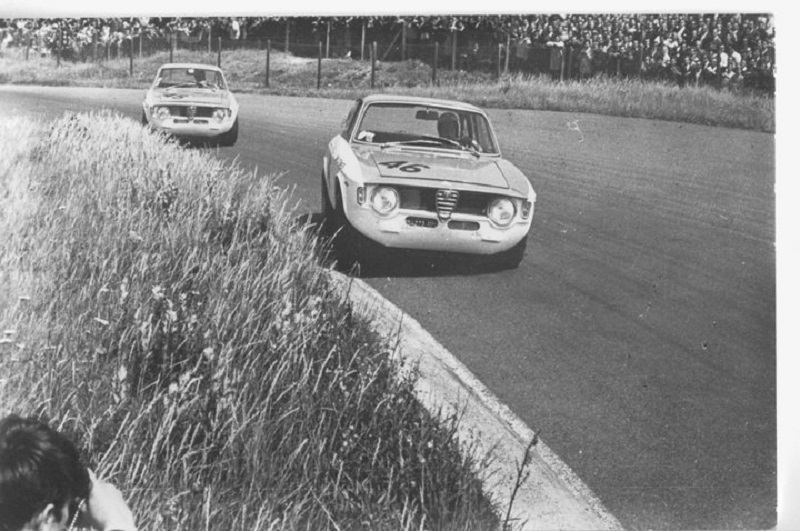 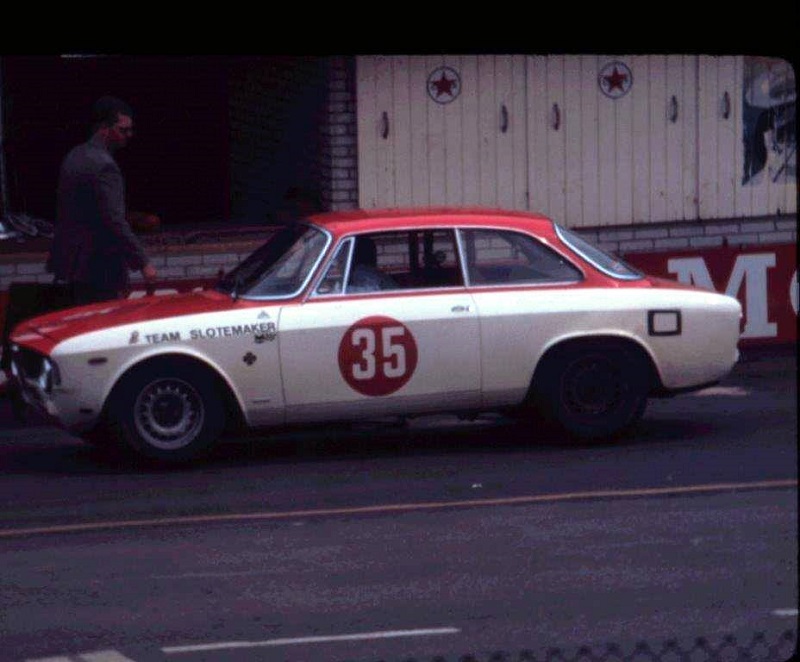 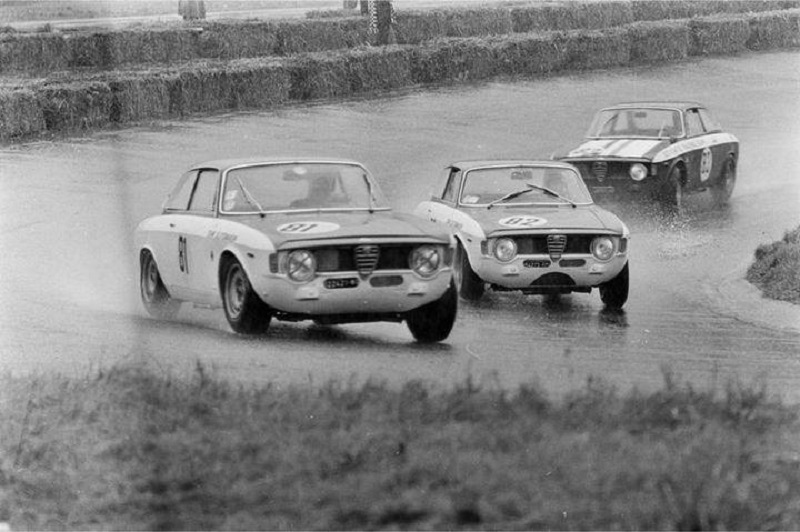 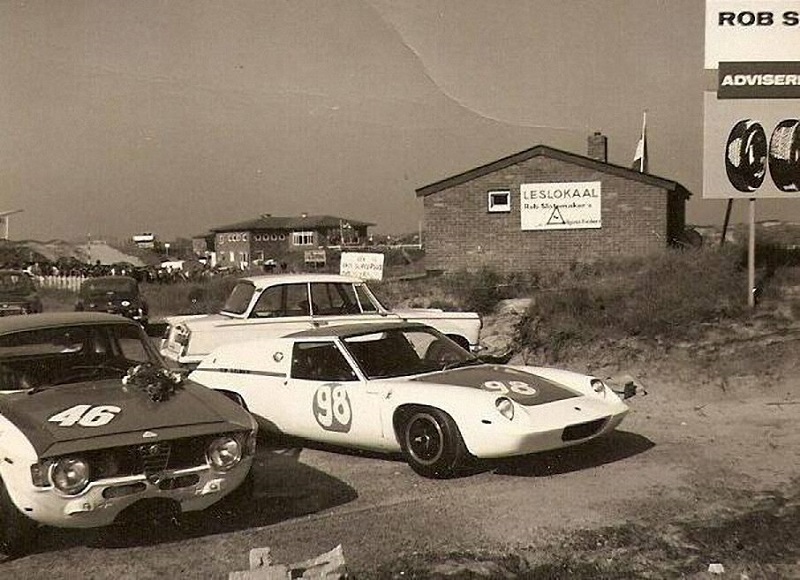 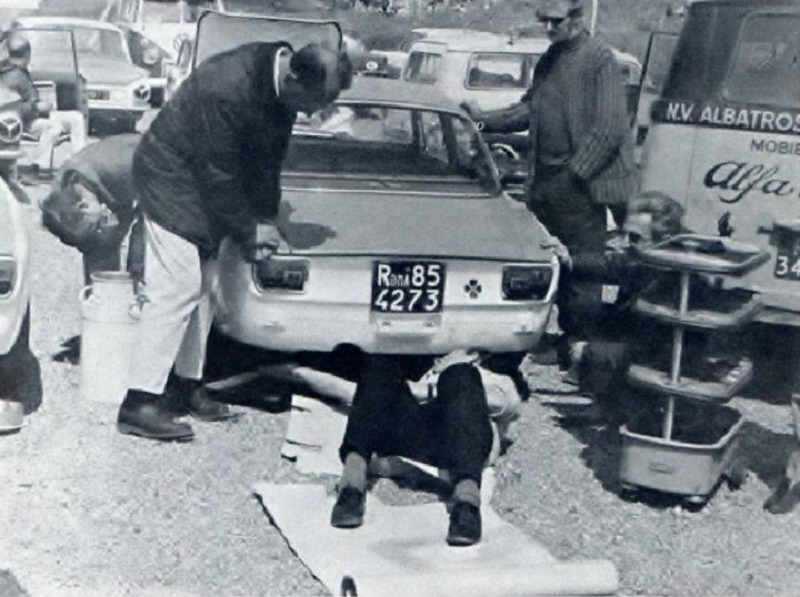 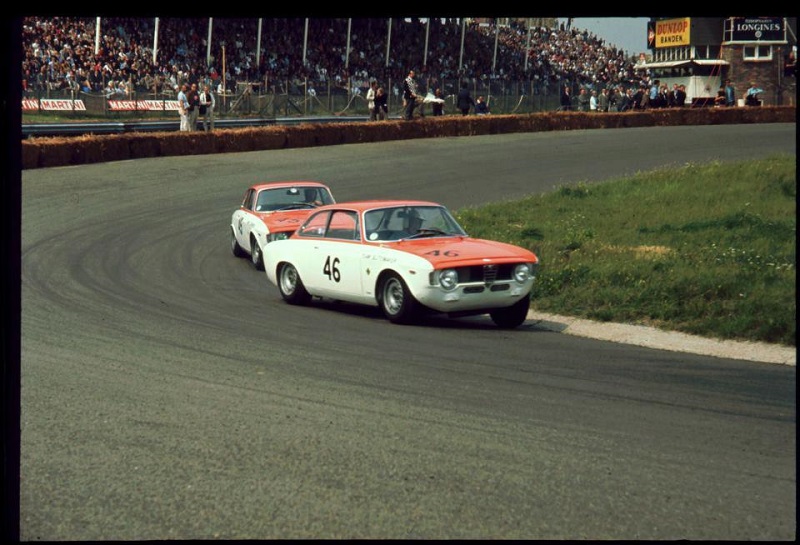 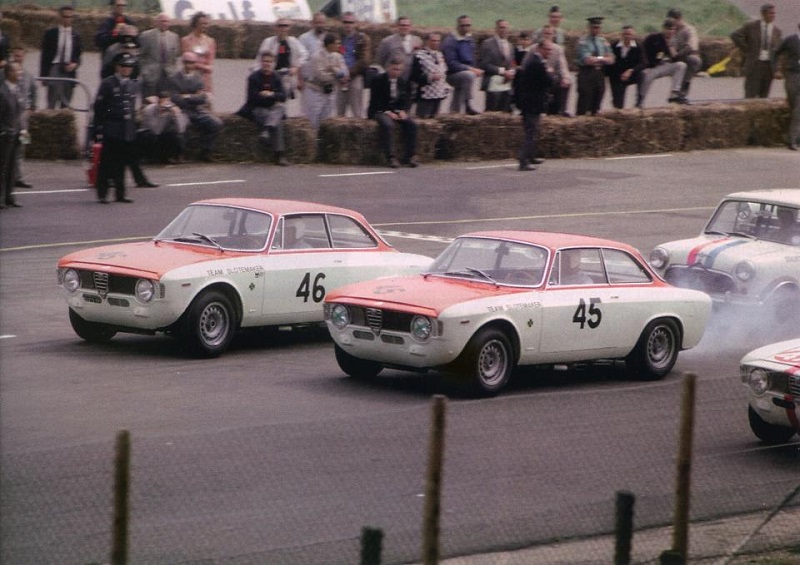 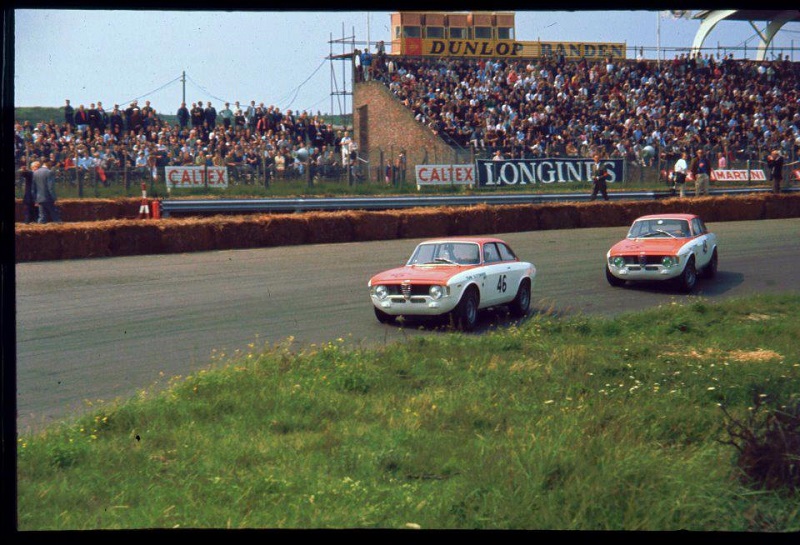 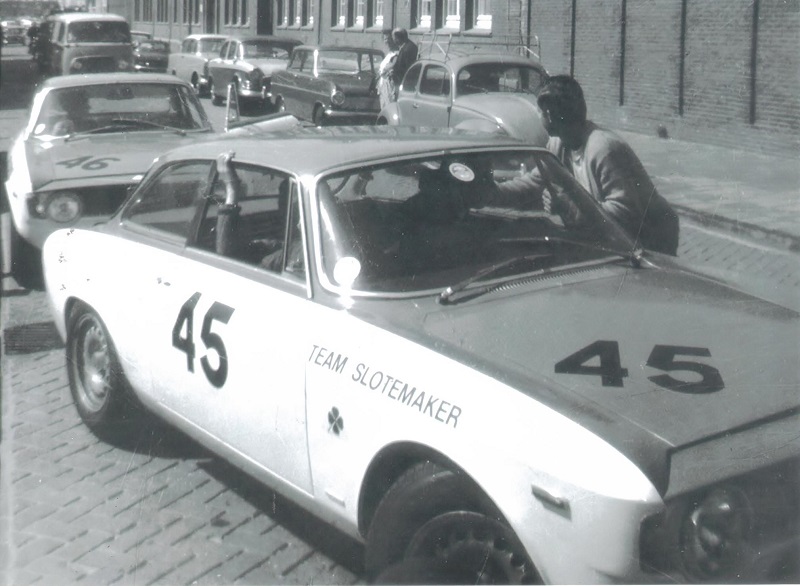 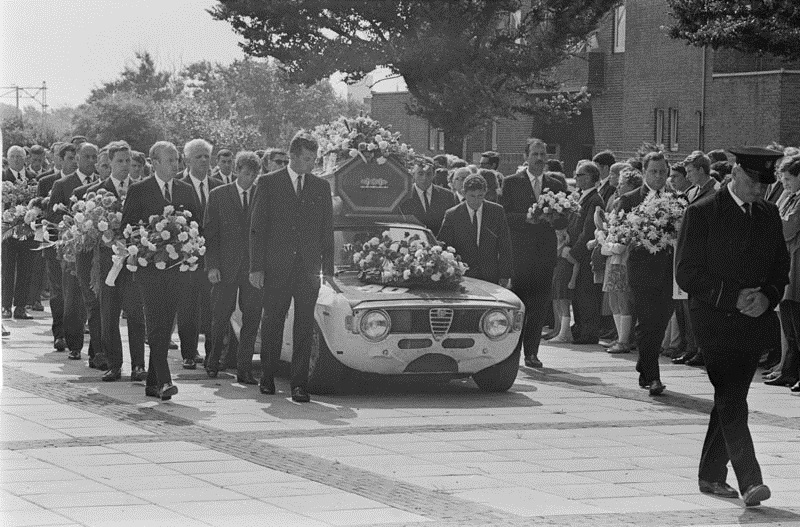