The Alfaholics GTA Replica goes to the Nurburgring Nordschleife

I was recently invited to join a group on a European tour to the infamous Nurburgring Nordschleife circuit deep in the Eiffel mountains. The chosen weekend of the 8th – 10th July was one of only a handful of weekends during the year when the circuit was open to the public all day Friday, Saturday and Sunday. My choice of car was either my newly aquired modern Alfa Romeo 2.0 GTV or my recently built Alfaholics GTA Replica trackday car… needless to say the GTA Replica was chosen – it was dreaming of trips like this that kept me in the workshops late at night finishing it!

The trip could not have come at a better time, as only 5 days prior to departure Alfaholics’ prototype 4–pot aluminium caliper, vented disc conversion kit for 105 series Alfas arrived at the Alfaholics office. The Nordshleife, renowned as the proving ground for all major car manufacturers, was to be the ultimate testing ground for the Alfaholics 4-pot brake kit, as well as a few other suspension geometry tricks I had up my sleeve!

We docked at Boulogne at 2pm. Whilst the majority of the group had given up on the idea of rushing through Europe to get to the Nordschleife before the track closed at 7pm, I was determined to get at least 1 lap in, as was my brother Andrew in his Alfa Romeo 3.0 24v GTV. We belted through France and, after a tortuous journey round the Brussels ring road in torrential rain, with 1 minute of track time remaining, in true film style, the brace of Alfas squealed into the paddock! Andrew just managed to beat the barriers, but by the time I had my chance to buy a ticket and get strapped into the Alfaholics GTA Replica, the barriers had shut! Such frustration after such a determined drive! Nevertheless, the track looked damp and greasy and we had a whole weekend of expected great weather to play. Once Andrew returned from reportedly hazardous track conditions we disappeared back to the hotel for some fine German lager! The rest of the group arrived in small groups throughout the evening with prize for the wettest crew being Matt & Pete in their open top MK kit car with no windscreen! 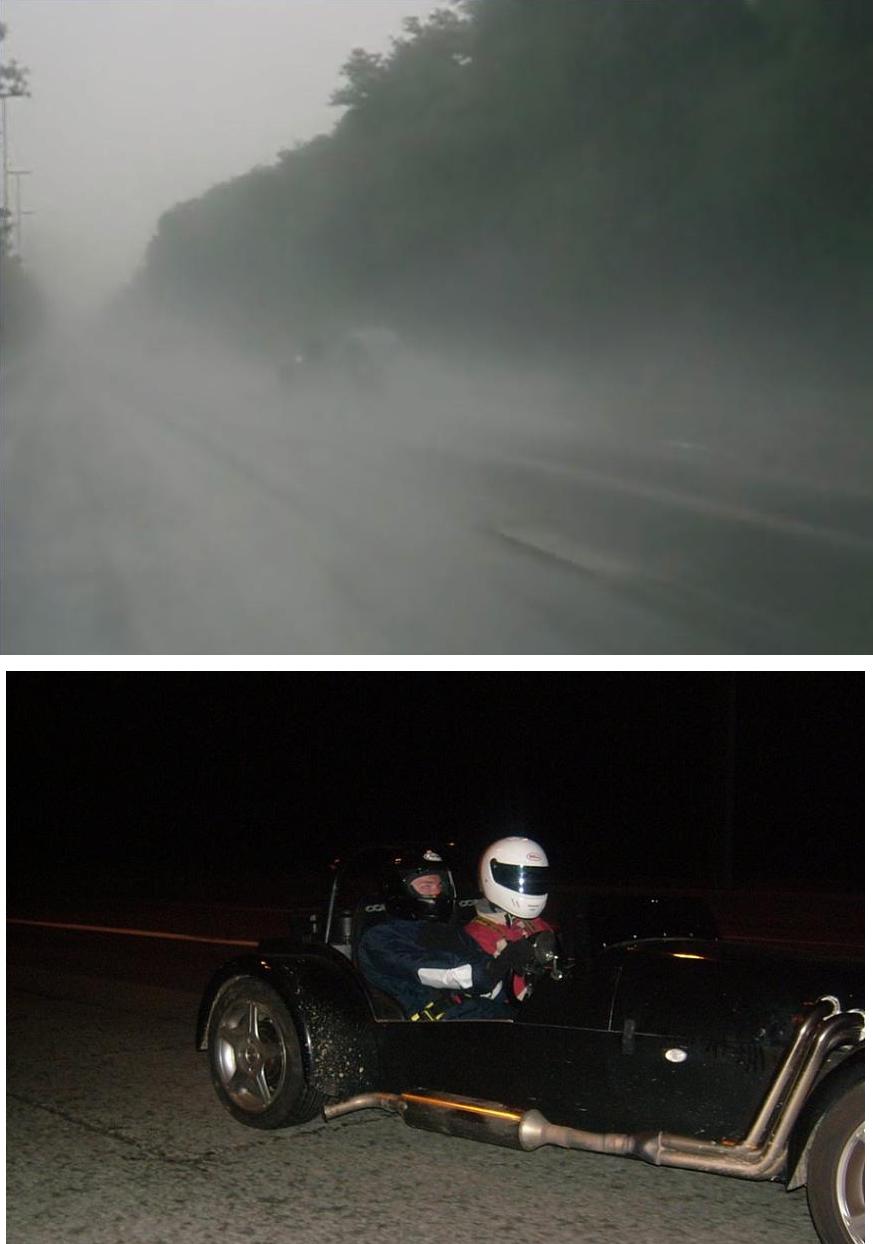 Saturday dawned with the sun partially hidden behind a mist over forest (the same type you get with early morning starts racing at Spa in Belgium) – you know its going to be a hot day! After a very German breakfast of cold meats and cheese, we arrived early and set up camp in the corner of the top paddock.

As we queued for lap tickets at the automated ticket machine, serious hardware began arriving; Caterham Superlight R500s, Porsche 911 GT3s, a Noble M12 GTO 400 (driven by Autocar test driver Chris Harris), an Ultima GTR, an 800bhp Toyota Supra and hoards of superbikes from all over Europe.

Serious machinery in the Paddock!

The 2 Alfas lined up at the front of the ever growing queue of cars anxiously waiting for the circuit to open. The gates opened, the ticket machine was fed and we were off into the depths of the Eiffel mountains on the most notorious circuit in the world! Nothing can quite prepare you for the Ring in real life, no matter how many Playstation laps you have done! The gradient changes are out of this world, as are some of the cambers, and the passengers report some breathtaking views (not that I had much time to take them in!). This is a truly 3 dimensional circuit!

My Playstation experience helped me with the circuit lay out and aided me to complete a brisk first lap under 10 minutes, only overtaken by 2 local 911s. Back in the paddock everyone returned from a thoroughly enjoyable first lap, the majority of us being Ring virgins!

It was clear the Alfaholics GTA Replica was going to be fantastically fast with more circuit knowledge. Its direction change was sublime with the increased camber I set just prior to the trip, the brakes were taking it in their stride and the car was a joy to play with on the throttle in corners. 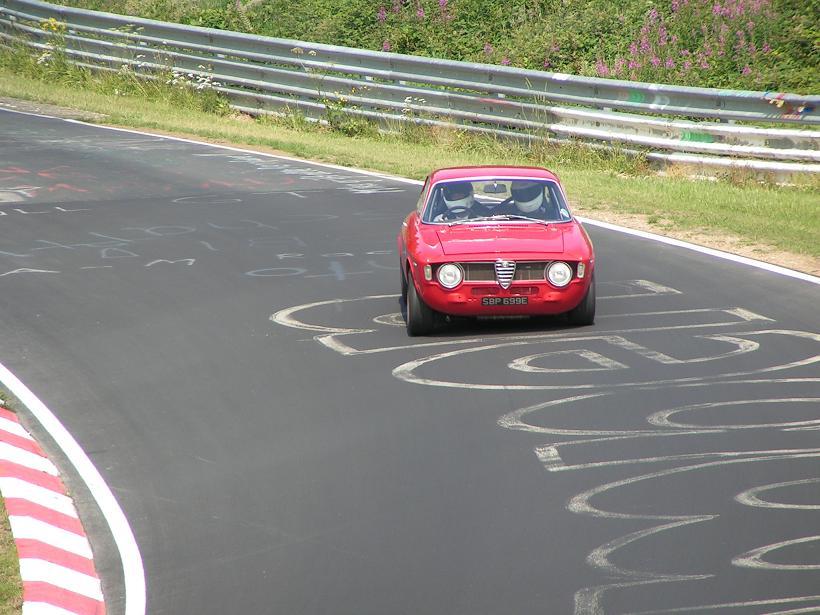 As the day passed and the laps went by, the Alfa was starting to fly round, Lotus Elises and Porsche Boxsters becoming regular prey! The Ring is a circuit where you must not forget to keep something in hand. This was brought to our sharp attention when the circuit was suddenly shut at lunchtime. 1 BMW had hit a deer crossing the track, and a Honda Civic Type-R went off through Fuchsrohre, clearing the Armco completely and landing in the depths of the forest! 90 minutes later the track was reopened and was immediately full with cars and bikes wanting to catch up on lost time. My last lap of the day was the most mind bending from a spectator point of view. I was overtaken by 4 bikes at different points of the circuit: all German, all black bikes, all in black leathers with black helmets and boots and with the obligatory titanium knee sliders! As I headed through the flat out dip on the way to Schwedenkreuz pulling 132mph in the Alfaholics GTA Replica I was passed as if I were standing still by the first bike (pulling at least 170mph) and with barely a lift he dropped the bike onto its side through the left hander, kneeslider sparking away! What a sight!

The little Alfaholics GTA Replica attracted quite a bit of attention in the paddock. A local German couple came over to chat. It turned out he raced a 1300 GTA in the 70s! By the end of the day I had completed 6 laps, which, although doesn’t sound like much, is 78 miles and nearly an hour of track time! We headed back to the hotel to recount our stories from the day over more than several beers.

Bitte ein Bit! Bitburger was the local beer of choice!

Sunday started with even better weather than Saturday and with a 9pm ferry to catch, we got to the circuit early to get in as many laps as possible.

After a night to think about the circuit, the little Alfa was really flying on Sunday, some Porsche 911s were becoming prey too now! The risks of the circuit were brought to the fore again as I flew over a blind crest at over 100mph to find a crashed Mitsubishi Evo XI on the side of the track but worse was the panicking passenger running down the racing line towards the blind crest: some quick thinking avoided imminent impact!

The famous former Ring record holder Sabine Schmitz was taking people for 175 Euro 1 lap thrills in her BMW M5, smoking the rear tyres though every corner. We tried to get a lap, but unsurprisingly she was booked up all weekend!

Sabine thrills in the M5 Ring-Taxi 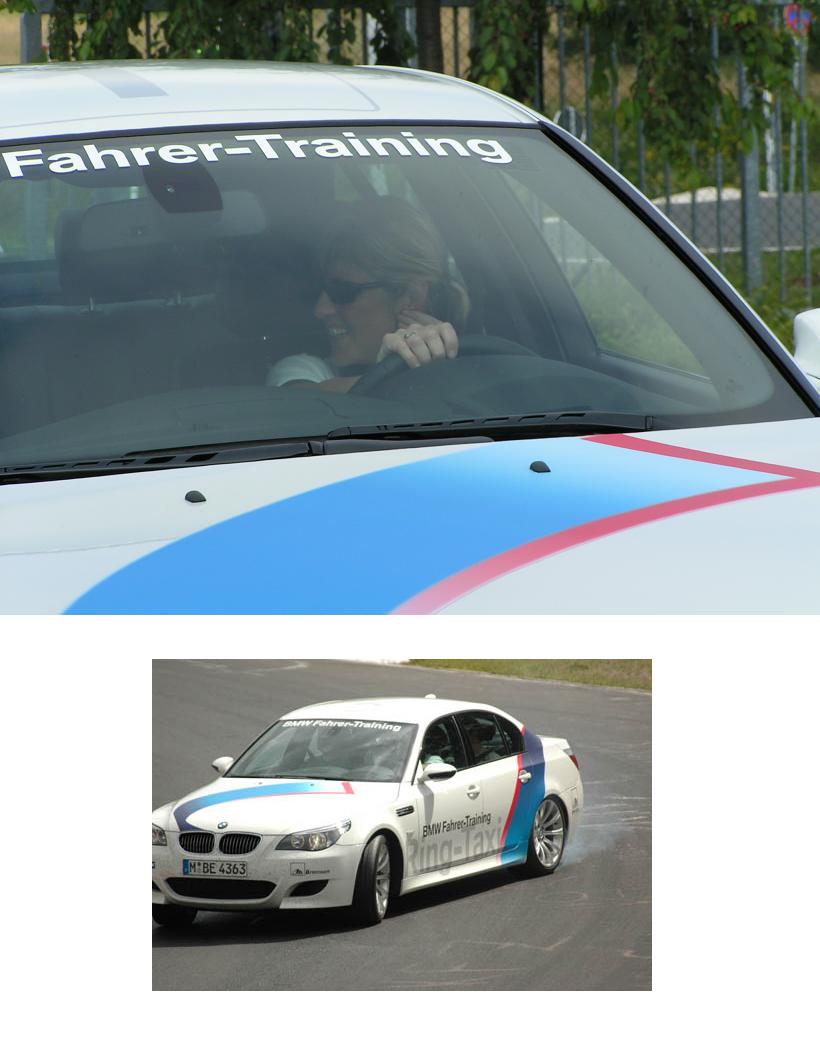 Time really does fly when you are having fun, no sooner had we arrived than we were packing to leave. The trip back through Europe gave me time to recollect my time at the Ring, the trip, the experience and most of all the car.

The circuit is amazing, any trackday enthusiast/racer must go for the experience, its out of this world! If you want to book a lap in the Ring taxi, do so months in advance to avoid disappointment.

The Alfaholics GTA Replica travelled 1500 miles in 3 days and never missed a beat. The 4-pot vented brake kit dealt with the abuse impeccably and came home like new; no fade, monstrous power and great pedal feel all weekend (standard brakes would never have lasted the abuse). The suspension geometry tweaks also proved fantastic. The ride quality on the motorways and the main roads was superb, it travelled through Europe so effortlessly, giving us such comfort. Then once on track the body control and balanced could not have been better, absolutely sublime, with eye watering direction change.

This car, with these suspension specifications and setting makes for the ultimate fast road/trackday Alfa Romeo 105 toy. Of course all the parts on this car that make it so good, are available to buy from Alfaholics and full suspension set up advice is available to all Alfaholics Handling Kit customers.

The 4-pot aluminium caliper, vented disc conversion kit is in production at this minute and will be available in 3 weeks time (beginning of August). There will be 2 options, a road/trackday kit with dust seals on the pistons and a race kit without dust seals.