They say that the sun always shines on the righteous! So, for the fourth year running Alfaholics were blessed with sunshine and fine weather for their annual spring track day at Castle Combe.

Bookings had started coming in before Christmas and the 54 places were filled two weeks before the event, which was being run to the previous year\’s format of 12 cars at a time on track in 15 minute sessions. 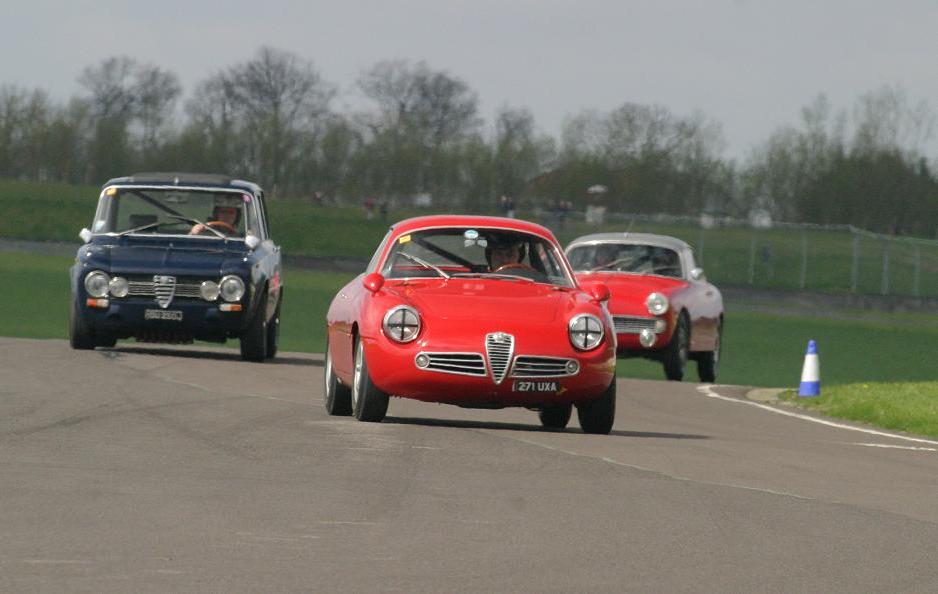 Richard Merrell organised a spirited get together the night before at the Salutation Inn, close to the circuit. An enthusiastic crowd of 20 people turned up, including Sussex based Alfa Specialists Ian Ellis and Alex Jupe, with Max and Diana Banks representing the organisers. John Dobson and his son brought their track/hillclimb GTV all the way from Yorkshire and David Stroud his modified Sprint GT from London, to share with Ian Ellis. 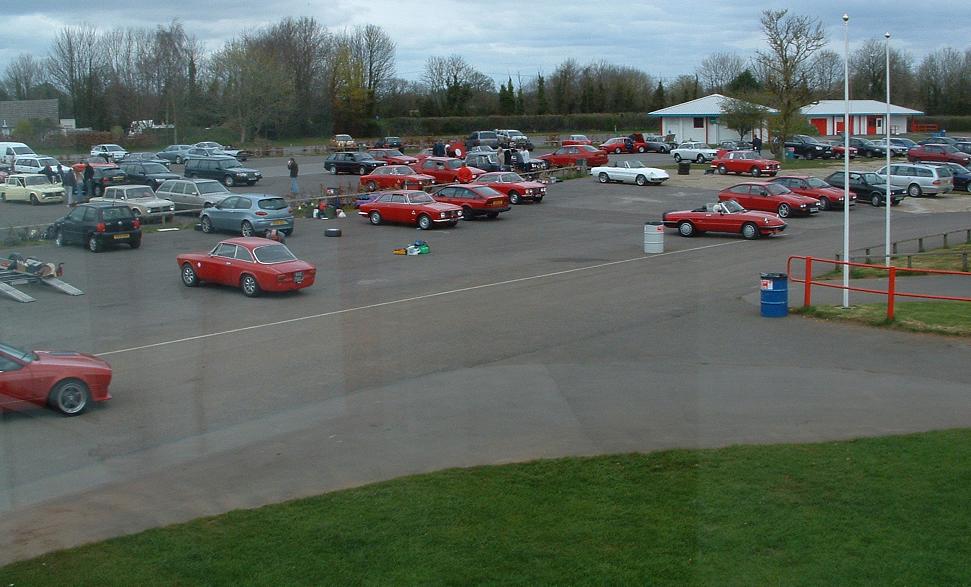 Despite Castle Combe forgetting the key to the Howard Strawford Centre, signing on was well underway in the Tavern Restaurant by 8.15 on Saturday morning, with Clerk of the Course, Andrew Banks, giving his comprehensive drivers\’ briefing at 9.40am in race control. Thus, familiarisation laps with Andrew and Max Banks for those unaccustomed to the circuit began at 9.55, whilst the old hands were soon on track after Castle Combe\’s strict noise tests. Andrew and Max were then kept busy instructing throughout the day.

Cars queuing up for the next session 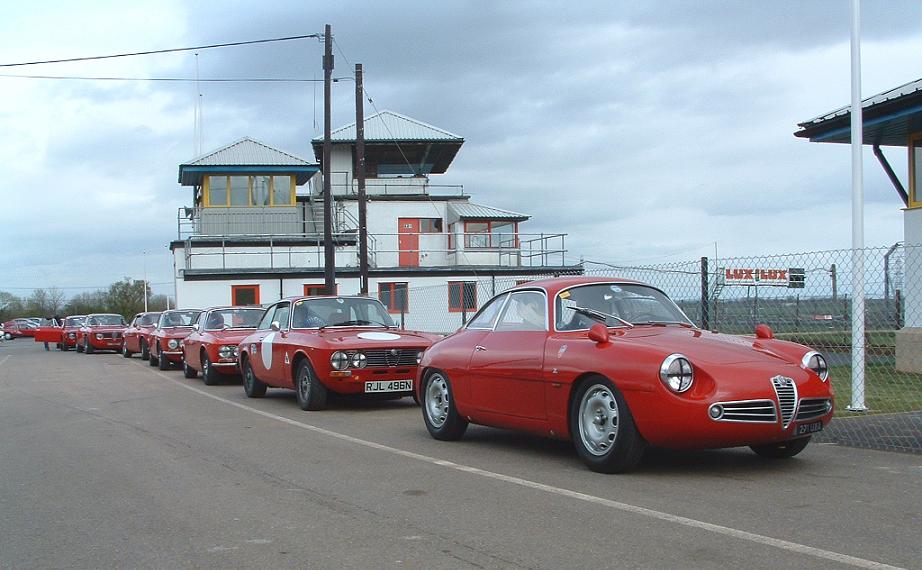 Morning track sessions lasted until the lunch break at 12.30, when 4 brisk parade laps behind Andrew Banks in his modern 3 litre GTV were enjoyed by more than 30 Alfas of all ages (and one Fiat!), not participating in the track day proper. This momentarily reduced the number of cars in the paddock, which mid-morning had been counted at more than 140. The central paddock area certainly resembled a full-on race day!

Turn out of Giuliettas was small but classy! Paul Featherstone brought his lovely Sprint, David Karat his elegant Spider and James Wiseman was enjoying his wonderful SZ with Chris Robinson. Register Chairman, John Williams, chose a 105 in the form of Yushen Ng\’s Giulia Super! Other Supers included those of regulars Andrew and William Jackson and Mark Nicholson of Italian race Services, whilst the lone Berlina, driven most spiritedly by Mark Warrington looked fantastic. 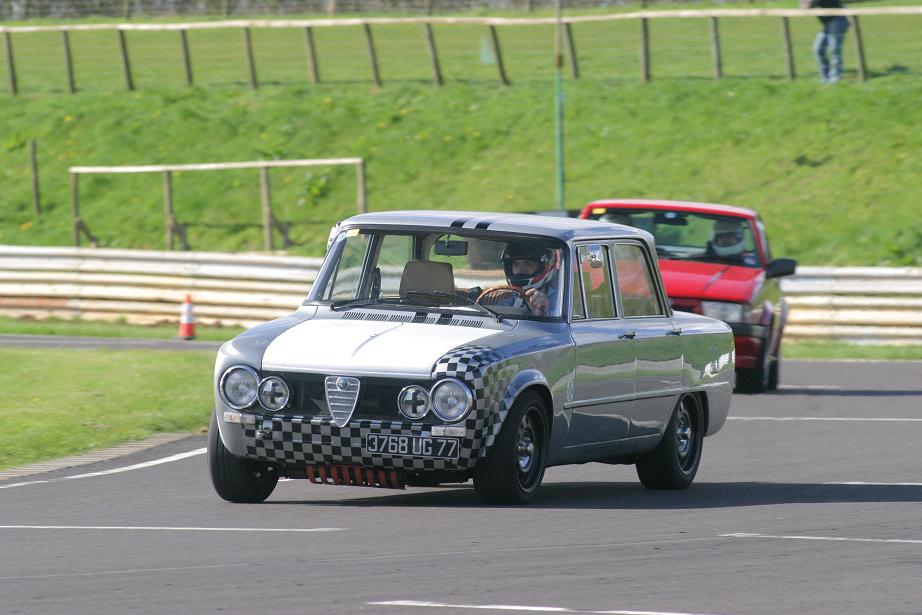 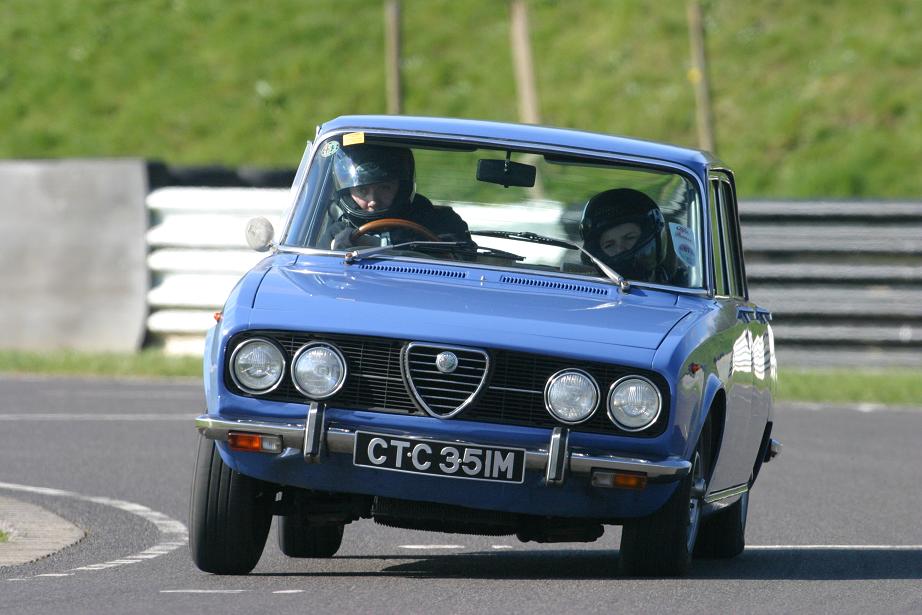 A small number of S2 and S3 Spiders appeared topless, as one would expect, but most popular was the Bertone Coupé with 24 examples, representing most models: Sprint GT, GTA, GTJ, 1750 and 2000 GTV, not to mention the rapid GTA replicas of Richard Merrell, Ian Pleeth and Max Banks. 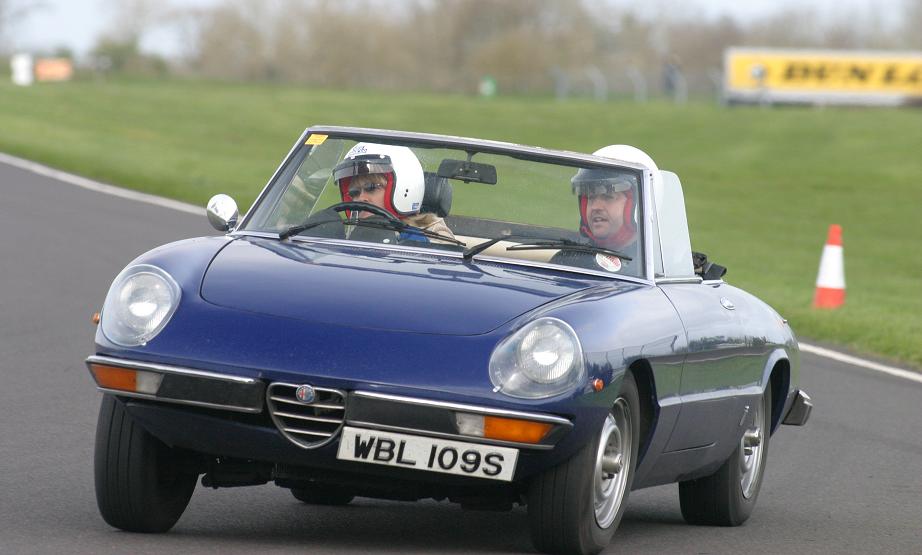 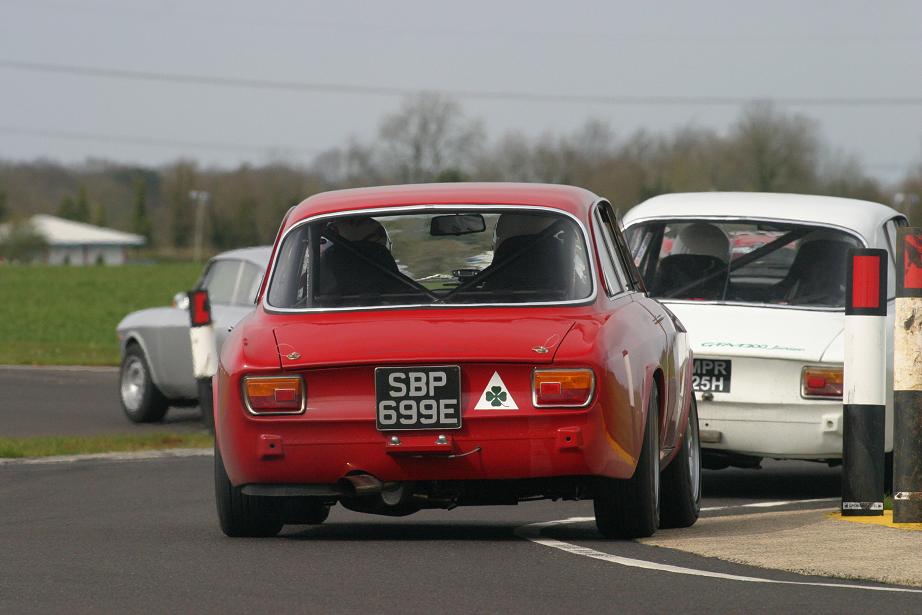 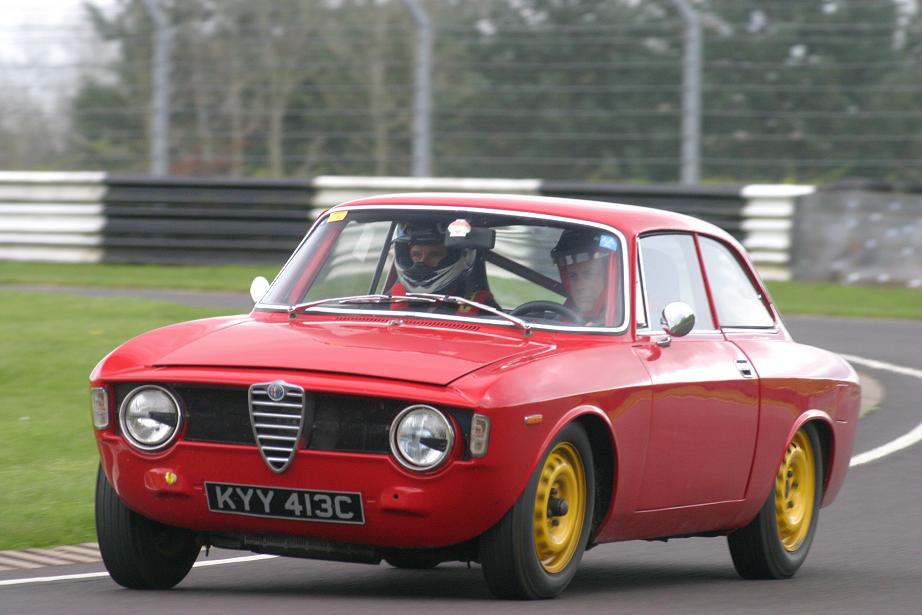 John Norrington in the GTV6 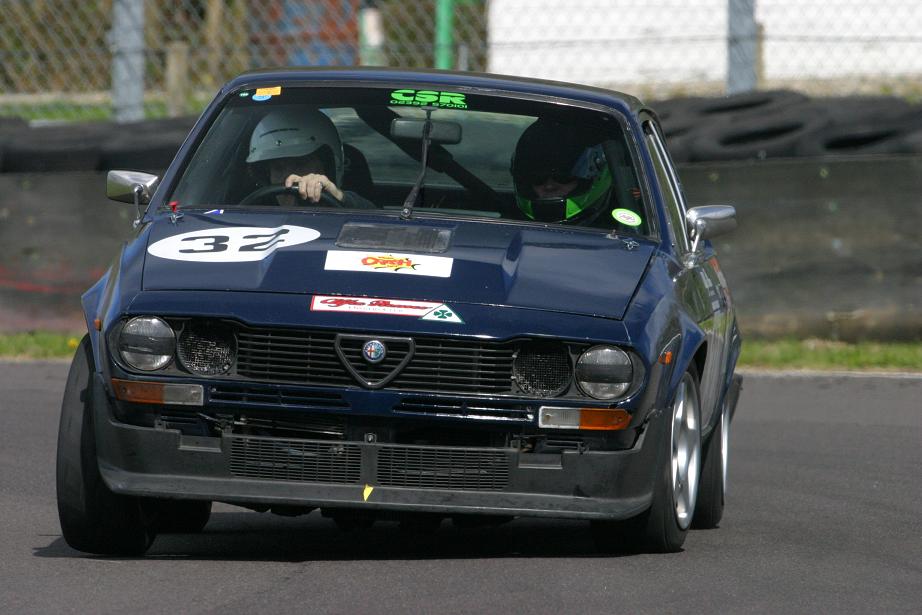 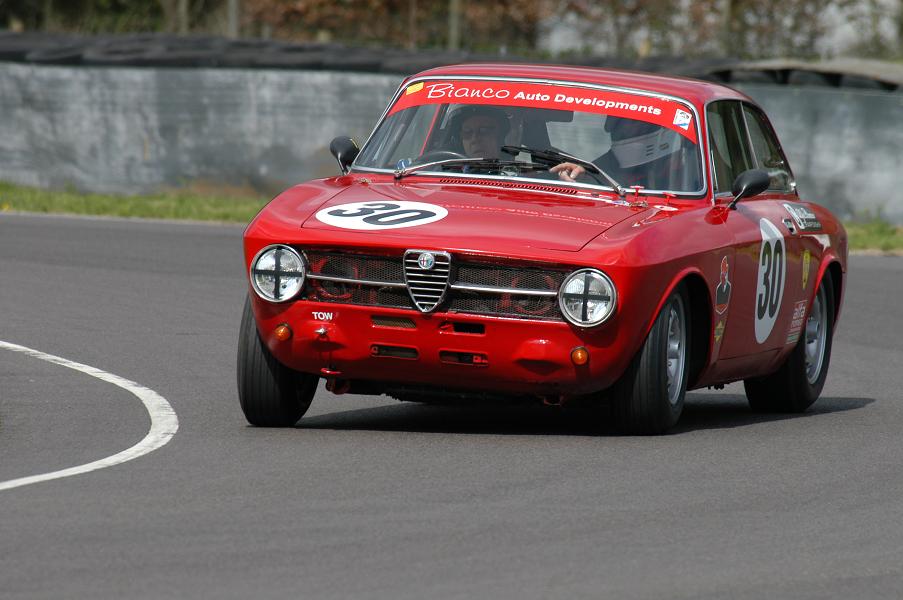 The atmosphere, as usual, was relaxed and friendly throughout the day and once again all cars left for home unscathed.

Alfaholics would like to thank all the participants for making the day so successful and to the many who have contacted us since. We look forward to seeing you all next year with the possibility of a second venue!

In the meantime, \’tracksters\’ can relive their exploits through the superb photographs taken of all the cars both in the morning and afternoon sessions by: Ken Carrington (Club photographer) Tel: 01245 473129 and Jim Gaisford (track photographer) tel: 01225 743400.