Robert Petersson visits one of the world’s leading Alfa-specialists and drives a classic roadracer with Porsche performance. 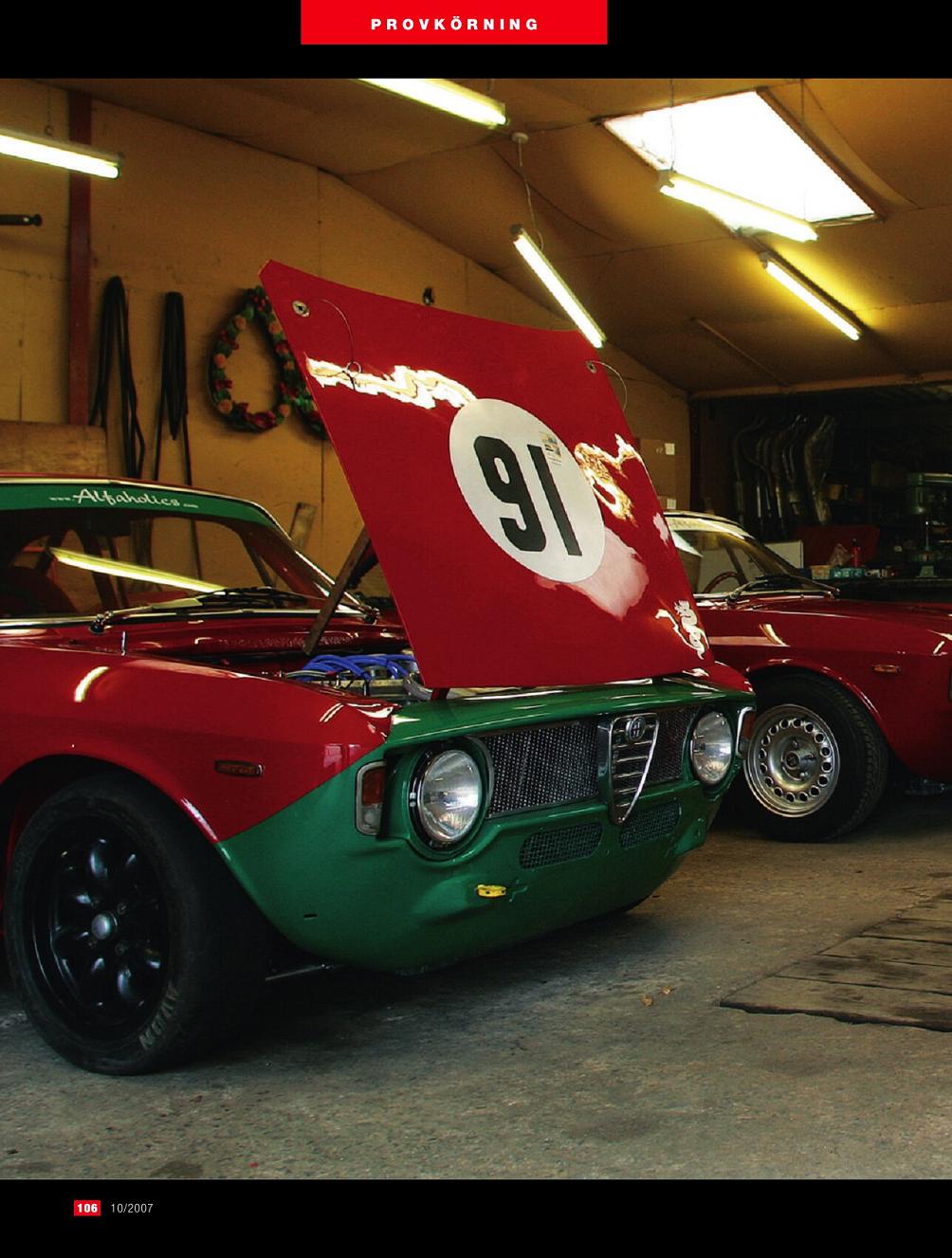 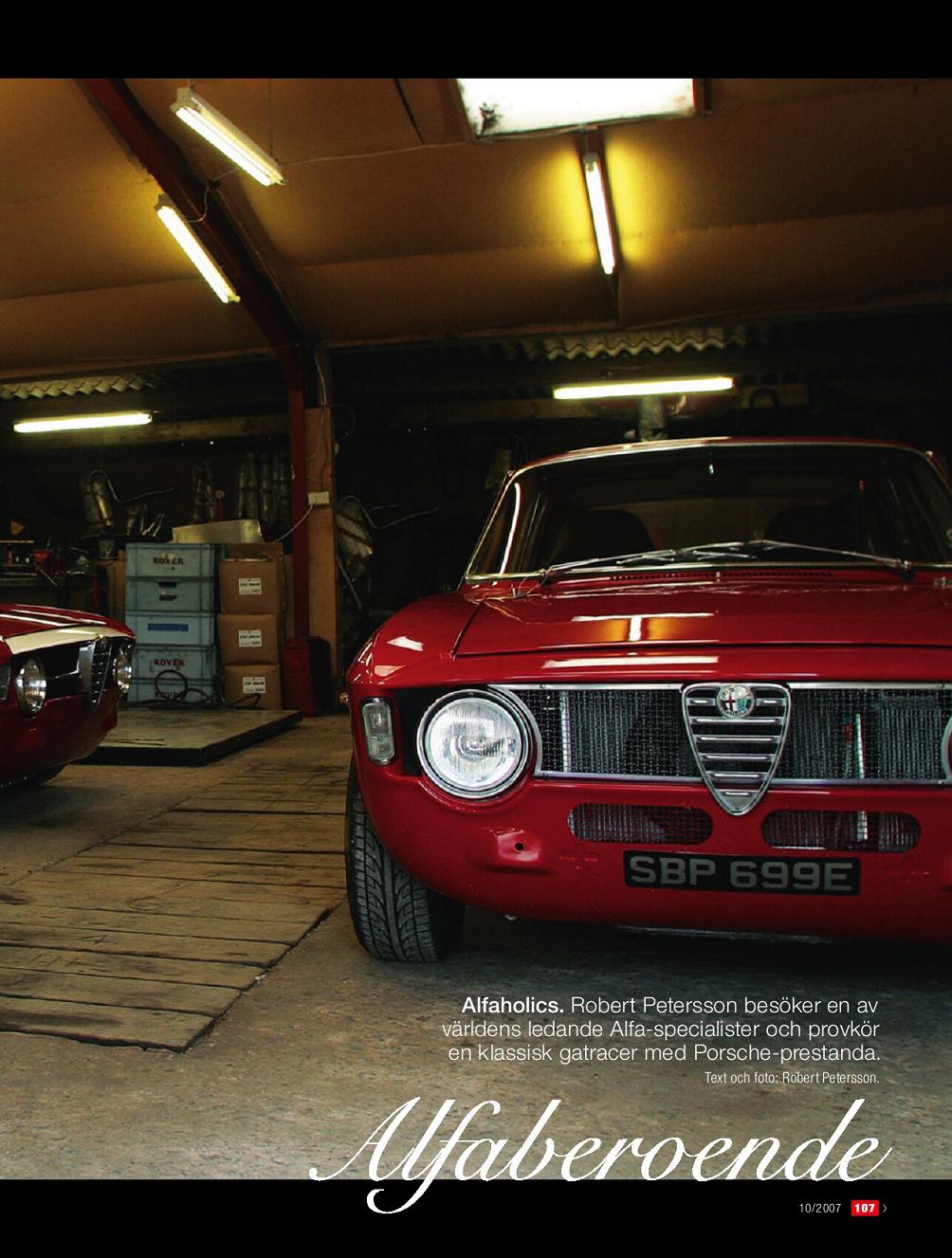 It was supposed to be easy to find Alfaholics, but… “Go to Bristol, then take the M5 South and in just over an hour after Bristol you’ll be there…”

Sure, but it took a full page of hand-written instructions to get through the last few miles.

“Go past dirty Devon farm, turn right after a green barn, and when you’re going downhill over a field, you’ve arrived…”. Not that I had one with me, but I still doubt that a GPS-navigator had heard of “The Bells” in the middle of nowhere… Here you will find the Banks’s family residence, at least where Mum and Dad, Diana and Richard live. The two sons, Maxim and Andrew, nowadays have their own places in Bristol.

The house is large and extends in all directions, and here you will also find the Alfaholics office and the comprehensive stores.

Close by, in another building, is the workshop where the cars are stored, and where work on them is carried out. You can see it in the opening photo where Maxim’s GTA Replica is on the right, full-blooded racer on the left, and a customer car behind it.

“Dad’s on his way from London, why don’t we go for a spin in the GTA Replica while we’re waiting.” Maxim’s proposition is very tempting since I’ve had four “Bertone-Coupé’s” myself: Three race cars and one road car, and in addition to those I’m in the process of building another race car. All this makes it very interesting to try out new solutions to the usual old problems!

Alfaholics has been around for almost ten years and during that time a lot has happened. One important development is that the company has gone from just selling parts for old cars, to developing improved parts, as well as remaking original parts. The start of this change came when Richard and an earlier partner went separate ways a few years ago. Then in 2004, youngest son Maxim joined the company after having finished his law studies at Bristol University. Today he is 24 years old and bubbling over with enthusiasm: ”The old ‘Nord-engines’ used in the 105 series are getting expensive, that’s why we’ve turned our attention to the more modern TwinSpark instead. They are also getting rare, and therefore more costly, but the positive things still outweigh the negative.”

As the name implies the TwinSpark uses two spark plugs per cylinder, just like the old race version of the Alfa 105, called GTA. ”Compared to the old engine, it’s much easier to get good power from it,” Maxim continues. Alfaholics uses Weber carburettors intead of the normal injection, but they keep the more modern ignition. ”By using the throttle position indicator, now mounted on the Webers, we get a three-dimensional ignition curve and the result is a broader power band and much better driveability.”

Absolutely! From being a quick classic, Maxim’s Coupé has been transformed into a Porsche 911-challenger! Yes, honestly! The power to weight relation is almost the same as that of a new 997 Carrera, and as an added benefit, the old Alfa is about 500 kilos lighter…

This means that the car is a stunning road-racer over the exciting Exmoor roads. Brakes are of course updated and the chassis balance is really impressive.

“It’s hard to find the right shock absorbers. The Bilsteins on my car are OK for road driving and Track Days, but the fully adjustable race shocks on the racecar are much better. Problem is they’re not accepted for historic classes by the FIA and are very costly. However, we’re working on a new solution to the problem” 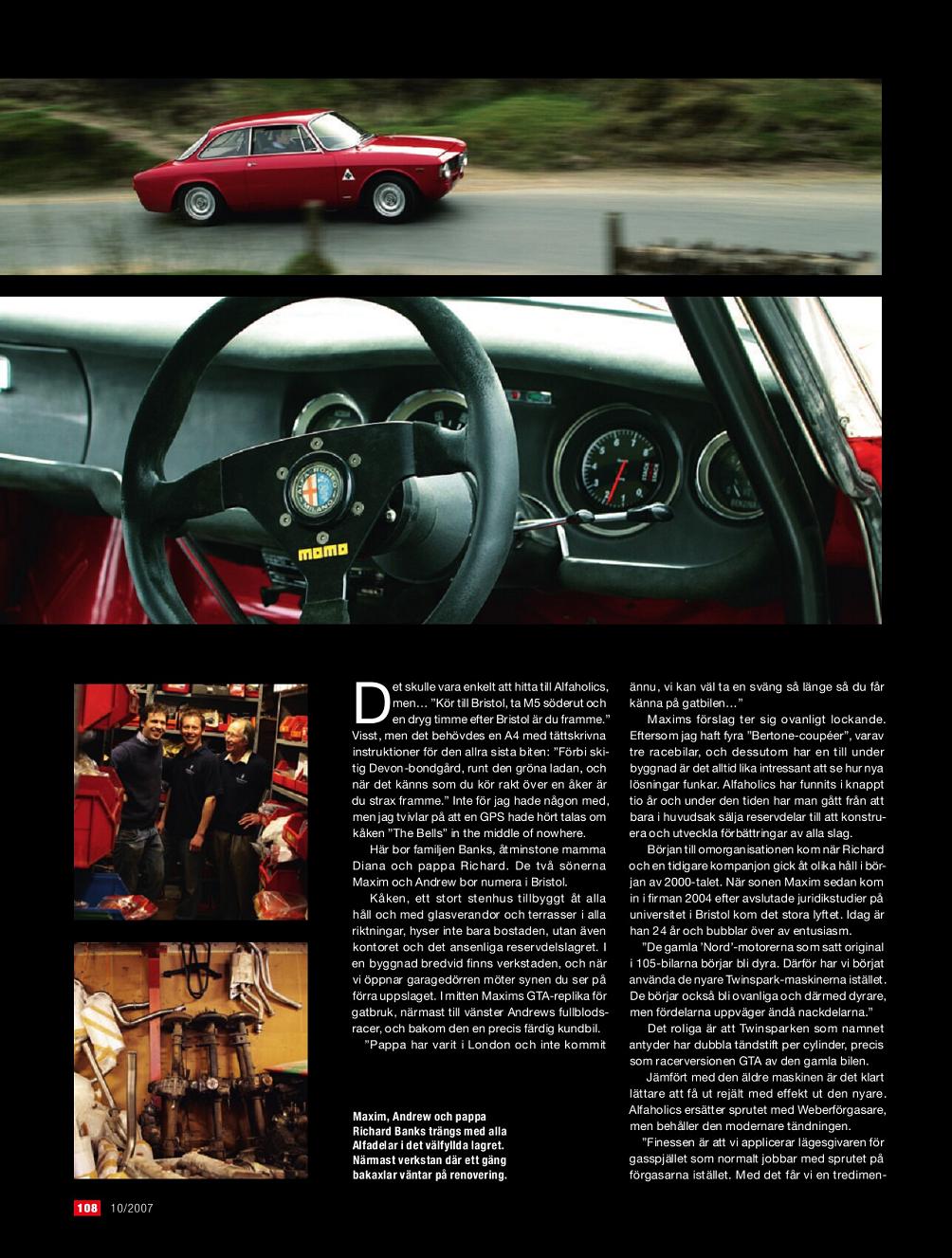 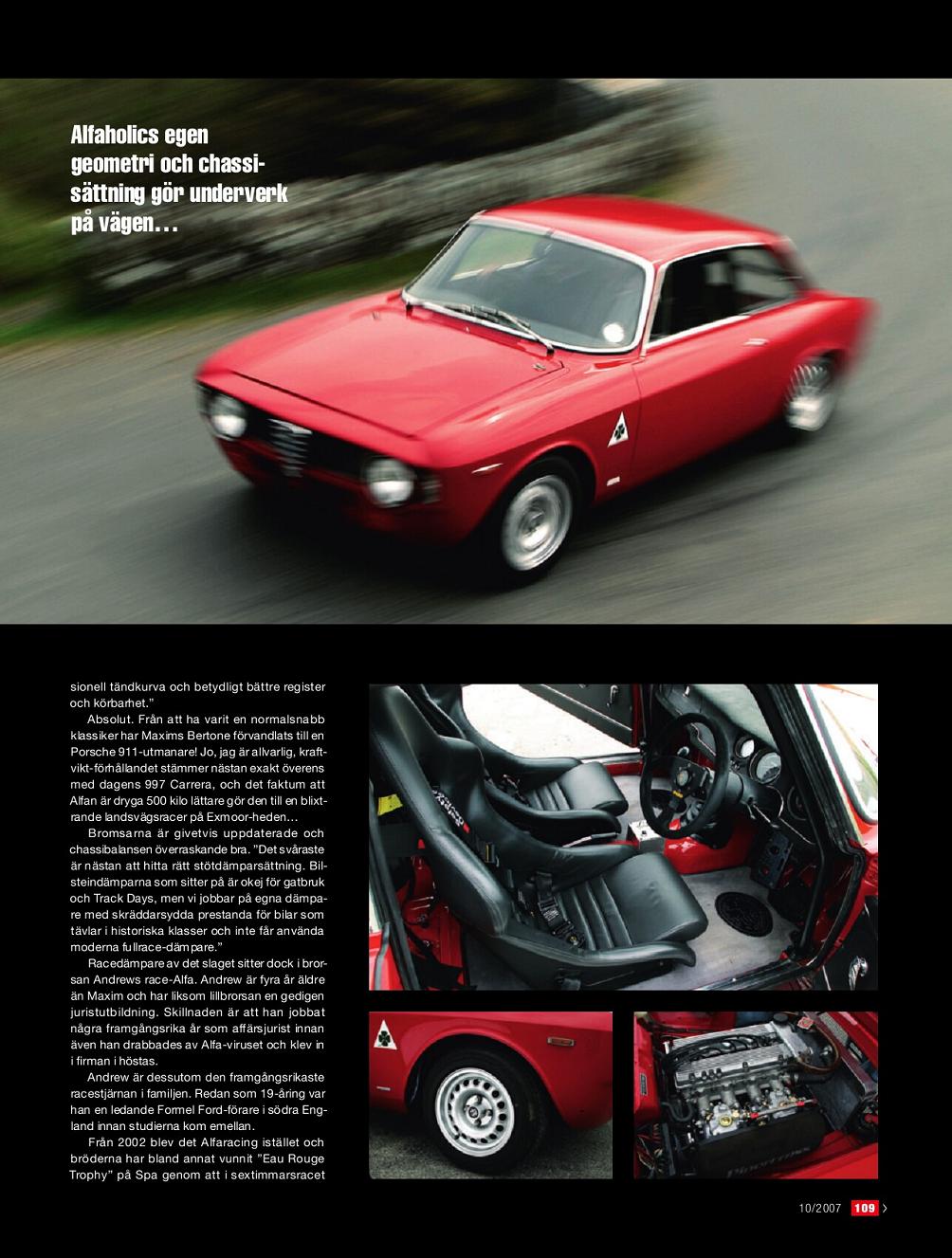 Brother Andrew is four years older than Maxim and is also a law graduate from Bristol University. The difference is that he has had a few years as a successful business lawyer before catching the Alfa virus and joining the company last fall.
Andrew is also the most successful racing driver in the family. As a 19-year old he was the quickest local Formula Ford driver, but then the studies got the better of him. From 2002, the racing focused on proving the Alfaholics products and together the brothers have, amongst many other things, won the “Eau Rouge Trophy” at Spa by finishing 8th overall in the 2005 Six Hour race. Of the 91 starters the majority had much quicker machinery…

In other words, the Alfaholics crew live as they learn, something daddy Richard has been doing since the early seventies when he started to concentrate on Alfas. Since then he has become Britain’s leading expert on GTAs and restoration of classic Alfas. Nevertheless, he also has a past on the racing circuits, something that is obvious from the second we meet:

“Whatever happened to Conny Andersson, that nice Swedish Formula 3 driver? And Swede Freddy Kottulinsky? We both ran Lotus 69’s, terrible cars, but he was stunning at the ‘Ring’…”

Today Richard devotes his time to tracing original parts and cars, preferably GTAs, while the two sons take care of the daily business and development. Maxim also tells me that the USA recently has become a strong market. He’s also quick to mention that there’s no business in just selling original parts these days. It’s the go-faster bits that they develop themselves that makes the company tick. The next project is to develop new parts for the Alfa type 916, the frontwheel-drive GTV/Spider launched in the early nineties, a project led by Andrew.

So, addiction to Alfa Romeo in not limited to one model, or one generation…

Look out, Virus Alfa is out to get you… 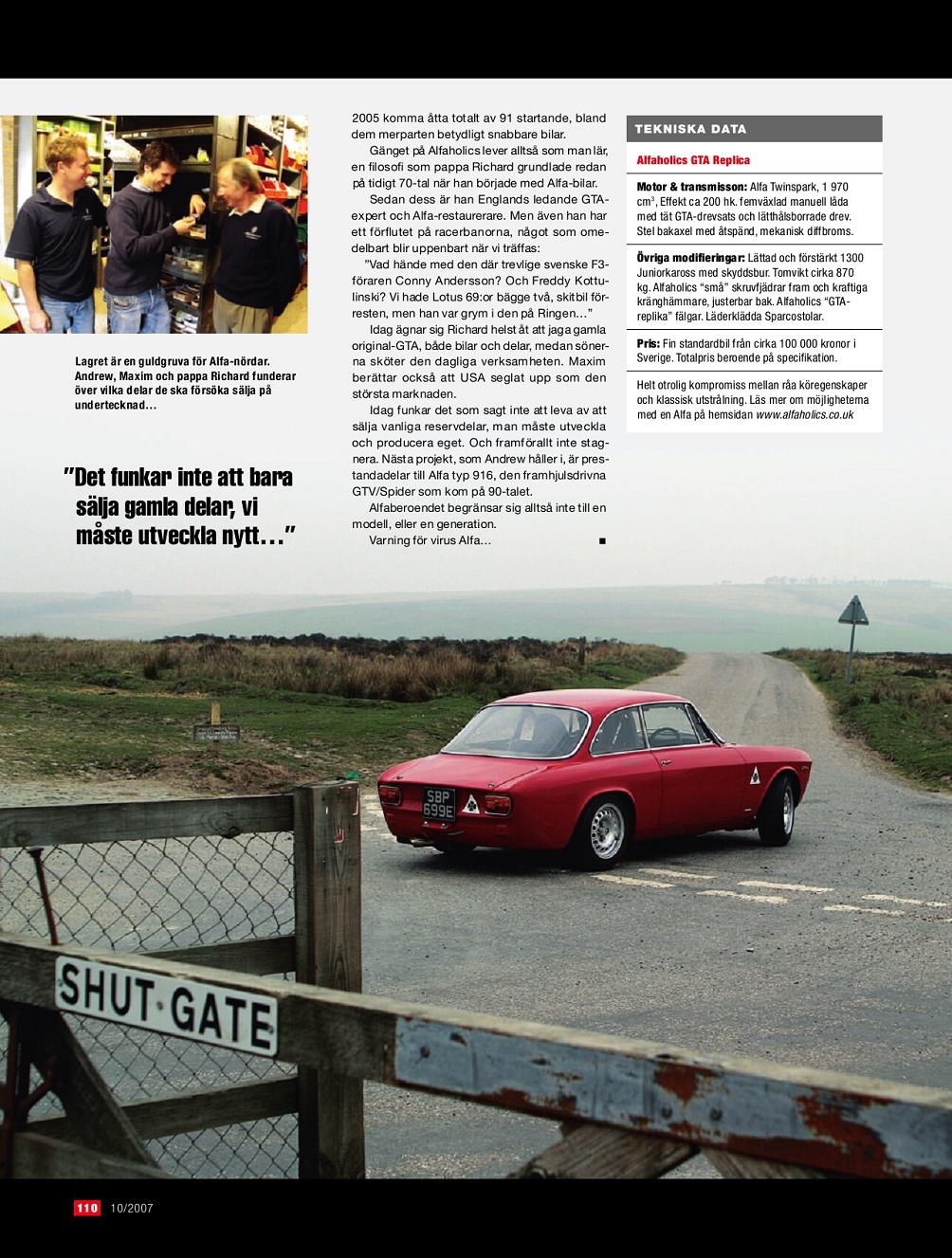