Victory for the Alfaholics GTA Replica at Spa 2004

Spa 6 hours 2004 was a huge meeting, with over 600 cars entered to race it seemed an organisational impossibility. Nevertheless we sat on the ferry with a degree of faith in the Belgian authorities; after all they had won back their place on the F1 calendar!

The Top Hat entry list of over 80 cars made for extremely varied reading; it would seem that anything and everything from the 60’s and 70’s was entered, ranging from Chevron B16s, GT40s and Lotus 23Bs through BMW 3.0 CSL ‘Batmobiles’ and 3.0 Capri’s, right through to Morris Minors and a MkVII Jaguar! A total of 84 cars were entered, so lapping back markers and not being held up in the pits was going to be the key to our success. 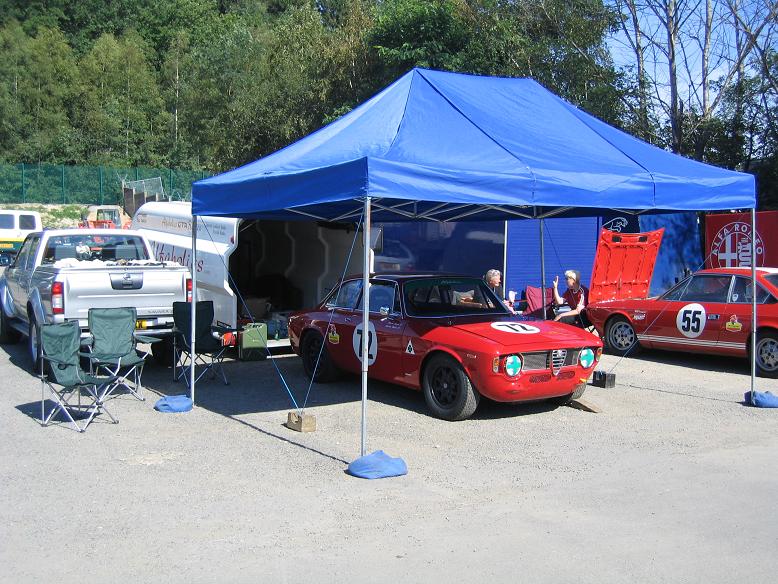 The Alfaholics set-up in the paddock 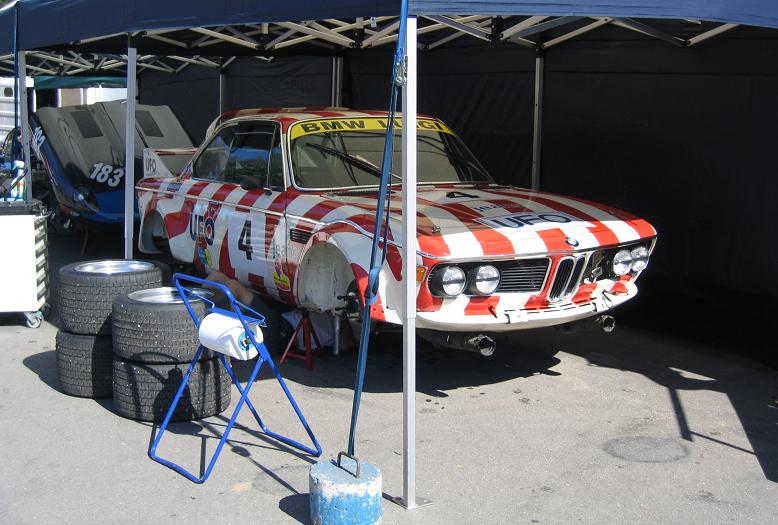 Free practice was scheduled for 18:55 on Friday night, with 133 cars due to be on track! The Belgians looked like they were already struggling to keep up with their ambitious timetable and it was 19:20 before the cars were let on to the track. Andrew Banks started the session and came in after 3 laps to hand over to yours truly Max Banks, in order to give me as much track time as possible, never having seen the circuit before. Strapped in and ready to go, it was clear that I had been over optimistic attaching my dark visor, for the sun was disappearing fast over the heavily wooded horizon! Andrew slammed the door shut shouting “it’s very busy out there and there’s lots of oil around”. Nice! Just what you want to hear before you attack Eau Rouge for the first time! Due to the shear number of cars it was just a case of timing the traffic to try and get a clear run through each corner once over the 6 laps, whilst scything past the slower cars, but keeping out the way of the Lola T70s and Chevrons! I put in a 3m09, not bad for a first attempt in the dark, in traffic, but knew the car was capable of a 3m05 in qualifying the following morning.

Saturday morning came and having spoken to several concerned looking competitors, the general consensus was that qualifying was going to be a complete traffic lottery. We decided it would be best to be out at the front, so we got to the collecting area as soon as possible. Although qualifying was only the second schedule of the day, it started 20 minutes late. Already it seemed that the organisation had gone to pot! The green flag dropped and all 84 cars disappeared over the top of Eau Rouge, Andrew leading the way. 3m11secs later Andrew came flying past the pits (not bad from a standing start on cold tyres), clearly driving like a man on a mission. It was several seconds before the pursuing train came past! His first flying lap was a fantastic 3m05.124 and he had clearly dropped the Historic Saloons that had been following him. After that lap traffic started to intervene and it seemed unlikely that anyone would go any faster. Andrew came in to let me have a bash at stringing some laps together before the race, as I had elected to start the race not having had a race at Chimay. I managed a 3m07.9 whilst held up in traffic and felt happy that I had a good lap sorted out in my head. 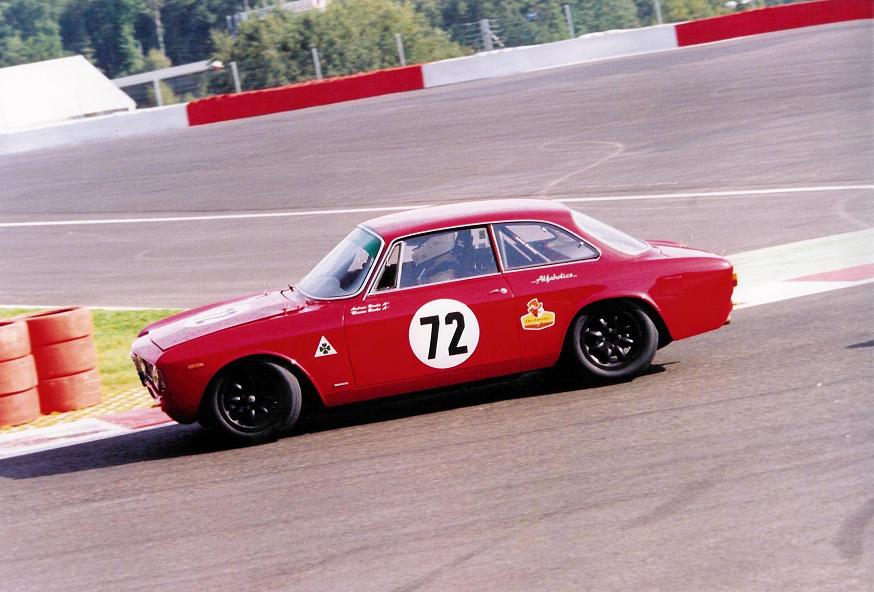 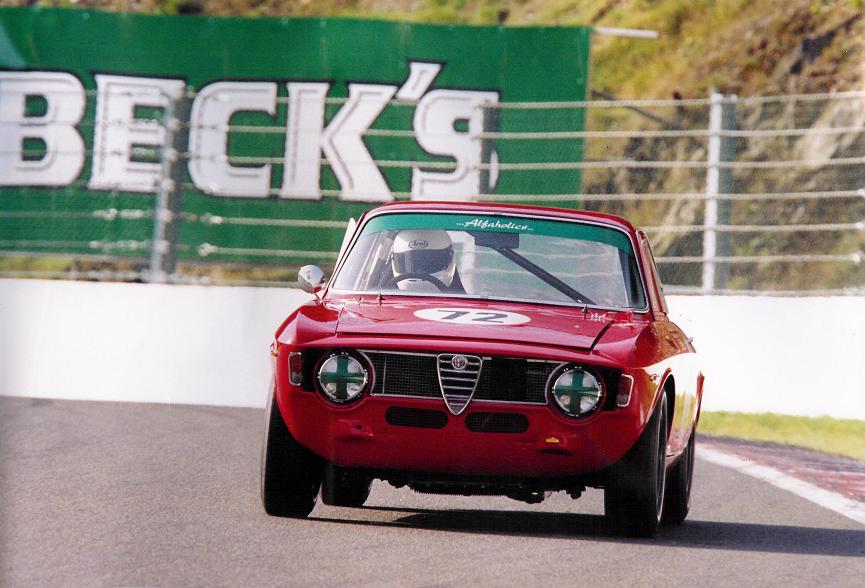 Andrew exits the ‘Bus-Stop’ on a hot lap in qualifying

Our time in qualifying put us 12th on the grid, and most importantly the quickest 60’s saloon car on cross-ply tyres, 3 seconds a lap quicker than Chris Sanders in his rapid Lotus Cortina.

Saturday evening was spent watching the main event of the weekend, the 6 hour endurance race. Standing on the pit wall, it made fantastic viewing as darkness fell watching the dazzling rally lights charging down the hill towards us and the red tail lights snaking up Eau Rouge and disappearing over the top of Raidillon. We left the circuit as the first round of pit stops and driver changes were being made under arc lights in the endurance pit, returning to the hotel to feast on some delightful Belgian food and get an early nights sleep before the big day. 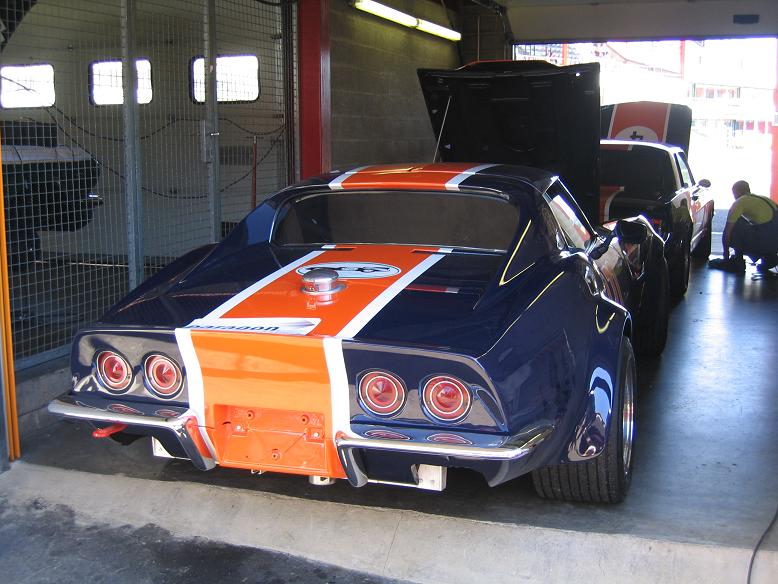 With Saturday afternoon free, it gave us time to walk round the paddock, here is one of the 6 hour Corvettes 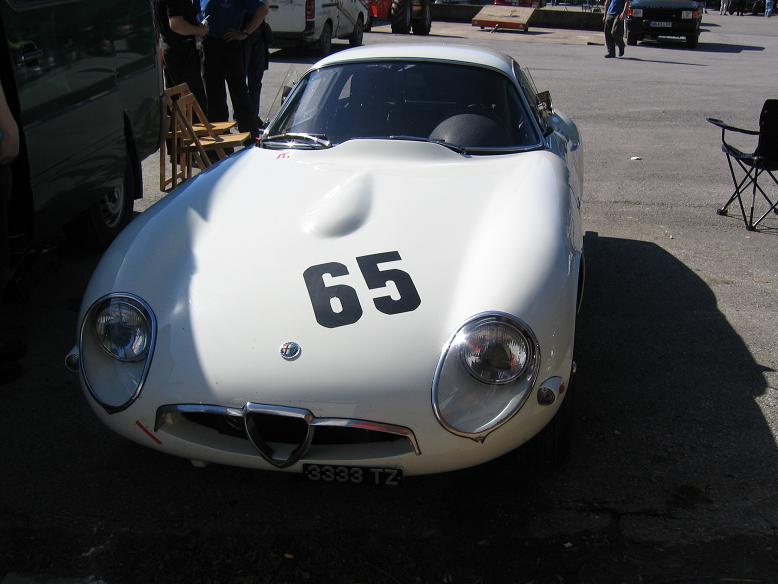 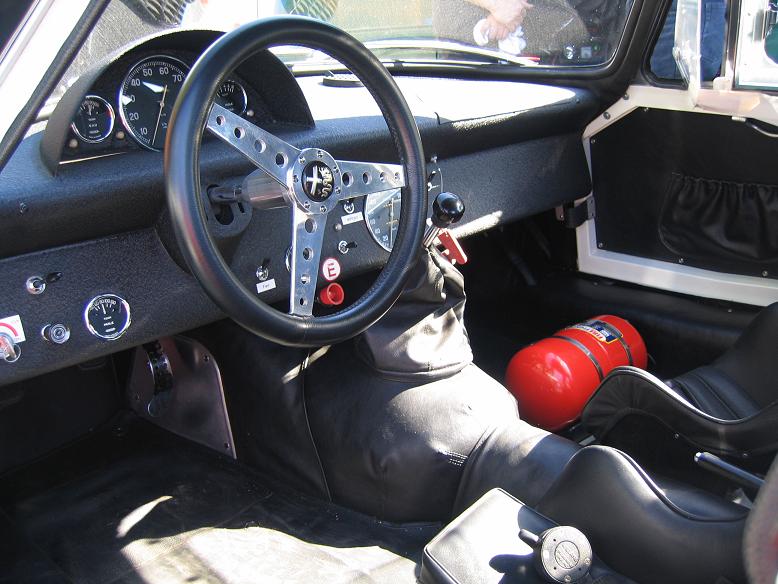 I awoke 10 minutes before my alarm, just enough time to do the first lap of the race in my head, covering as many eventualities as I could possibly think of! Arriving at the circuit with the breathtaking view of Eau Rouge in front of me (the TV does not do justice to the gradient!), it became apparent that I hadn’t covered one eventuality in my bed that morning; it was wet! Stories spread through the paddock of the Six Hour race being cut short due to rain near the end and too many cars stuffed in the barriers around the circuit!

As the sun appeared from behind an evil looking cloud and the breeze picked up, there was a glimmer of hope that it might be a dry race after all. Eventually the sun burned through the mist and clouds and the circuit dried up an hour before the race. What a relief! I have to admit that I did not fancy starting my first race at Spa with a final grid of 73 cars, surrounded by some serious machinery in the wet. Trying to squeeze through Eau Rouge as fast as possible would have been a nightmare!

Many of the sports cars that had qualified at the front of the grid did not to race. They had probably used our race entry as extra track time before their own main race. This was something race organiser Julius Thurgood had not considered when he took their entries rather than other Historic Saloons that should have been racing! This promoted us to 9th overall on the grid.

I was lined up immediately behind a V8 Sunbeam Tiger, with a GT 40 and a Dulon in front of that. Next to me was a TVR Griffith, and behind me was Chris Sanders’ Cortina with Simon Garrad’s very light GTA next to him. Yes the start was going to be close! As we funnelled through La Source and down towards the start line, the GT 40 of Leo Voyazides backed our line up to get a run at the start. With two big V8s in front, I was in danger of being left behind when they decided to go, so I backed up a little and buried my right foot early. As I approached the Tiger’s rear bumper at quite a rate of knots I wondered if I had gone too early, but to my great relief and excitement I had timed it perfectly and the Tiger disappeared just as I was within a couple of inches of his bumper. I approached Eau Rouge and it became apparent that the TVR had not made such a good start, allowing me to take an uncompromised line through Eau Rouge and giving me a run on the Tiger up to Les Combes which due to its power, turned into a nice tow. I in turn dropped the TVR, Lotus Cortina and the two Alfas. Following the Tiger turned into a bit of a nightmare as his corner speed and braking were holding me up badly through the turns but the extra power allowed him to disappear down the straights. This let the Sanders’ Cortina catch up and for a lap he was climbing all over my boot lid as we both battled to try to pass the Tiger. I managed to go round the outside of the Tiger through the first part of Pouhon but alas his power allowed him to drive past me on the next straight! This acted as a bit of a wake up call for him and he pulled away allowing me to attack the corners and braking zones to full effect. I was then able to pull away from Sanders. At the end of the third lap with a nice lead of more than 7 seconds over the pursuing saloons all appeared straight forward for us, when out of the blue the safety car board came out, I could not believe my luck; all that hard work had gone to waste! As the laps passed, it dawned on me that if the safety car stayed out much longer, the pit stop window for the driver change would open, forcing me in to make an early stop. As we past the pits once more behind the safety car the clock read 18 minutes; if the safety car stayed out for another lap I would be forced in. We passed the scene of the accident, a badly rolled Mk7 Jaguar at Pouhon, to find the car had been moved and the mess cleared up. Surely the safety car would go in that lap allowing our race to continue, but the lights stayed flashing on the safety car! In the pits I came, followed by the Cortina and Garrad’s GTA, our pit stop was slick, only 17 seconds stationary, but Garrad, who was racing on his own, just managed to beat Andrew out of the pit. Lap after lap passed with Andrew still behind Garrad, but catching, and then out of the blue the chequered flag came out 51 minutes into the race, 3 laps early!!! We were left wondering what might have been with a couple more laps, but it did not matter as Garrad was not in our class, making us winners of the top class of the GTA Challenge! After the race there were stories of an epic battle between Andrew and Simon, side by side all the way round the back of the circuit, lapping cars either side, and some grassy moments! It seemed Andrew just did not get the breaks with the traffic that Simon did, giving him first historic saloon home after a great drive! However, it was our car that posted the fastest Top Hat race lap of 3m06.1.

Victory at last after our most unlucky season racing ever, a small reward for all the time and effort (blood, sweat and tears!) that I have put into preparing the car this season!

Next stop Mallory Park in 3 weeks where we hope to defeat the Mustangs that out us back to 4th place last year!