This year has seen a reshuffle in the organisation of the Dutch Alfa Challenge that we raced in at Zolder in May 2006. This year, it has strengthened its ranks by teaming up with the German Kumho Alfa Series. Not only has this added more cars to the grid, some very impressive, such as a fully modified Montreal, but it has also added some excellent circuits to the calendar. 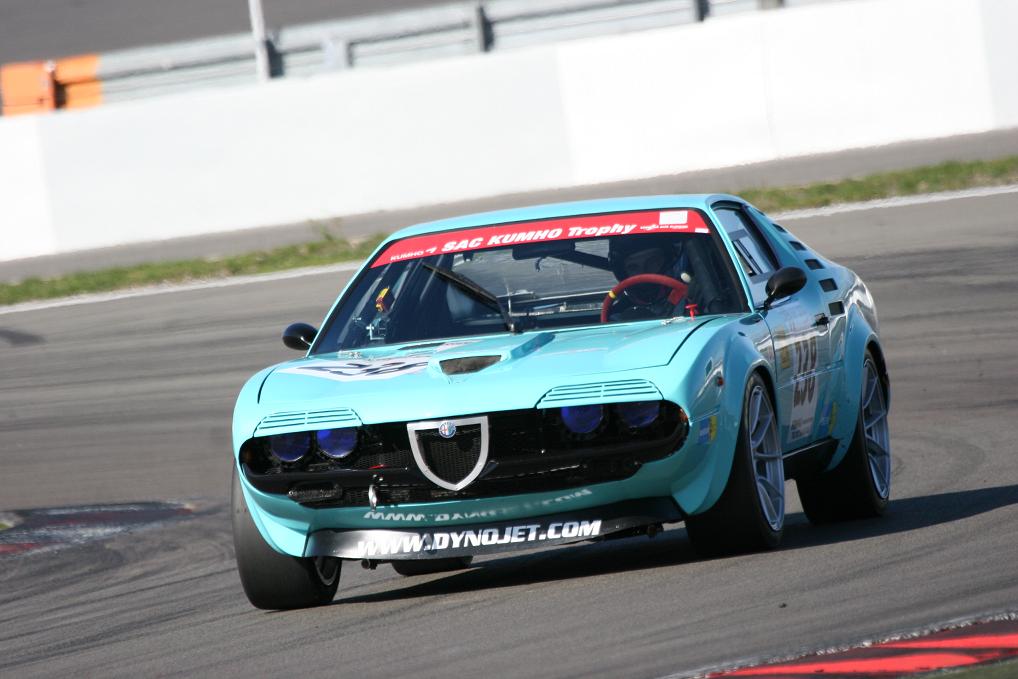 The October Nurburgring F1 meeting was the season’s finals for many high profile series, including EuroBoss F1 and Caterham EuroCup. It promised excellent racing as people diced for final championship positions in these superb series!

We booked to stay at our usual favourite hostelry, the Hotel am Tiergarten that we use for our Nordschleife trackday adventures, a convenient 2 minute drive from the F1 paddock entrance and home to the Pistenklause restaurant.

Friday gave us an opportunity to learn the circuit, for neither Andrew nor I had ever driven the F1 circuit before, despite many trips to the Nordschleife. Two 25 minute free practice sessions gave us about 10 minutes track time each per session, which equated to only 11 laps each in total! Before we knew it both sessions had flashed past in a blur and the next task was qualifying on Saturday morning. With a full grid of 44 cars, virtually all (except our friend Alexis with the Scuderia del Biscione GTV6) regulars at the Nurburgring F1 circuit, it was not going to be easy to get the car up at the sharp end of the grid. Each day we had been at the circuit it had been very misty and foggy first thing in the morning until around 10am. Our qualifying session was the first of the day at 8am! When we arrived at the paddock, the car was soaking wet and the visibility very poor, perhaps too poor even to run the session. Nevertheless, I was keen to get to the collecting area early to ensure good track position for the session. In the collecting area we were informed that qualifying would start behind the Safety Car, giving us an opportunity to work some temperature into the tyres and allowing the officials to be happy that it was safe to run the session! Off we went out on track, adrenaline pumping, with visibility truly terrible! 2 cars in front was all I could see, the Safety Car being completely hidden! Initial temperature worked into the tyres we came through the last bend and it was all go. At racing speeds the visibility in the last sector of the lap was terrible. I hooked onto the back of Tom Kuiper’s rapid Sprint GTV and we cleared our way through the traffic. Several laps later I was able slip past Tom and bang in a succession of fast laps, my knowledge of the circuit improving lap by lap. After that I started lapping slower cars so the best laps had definitely been and gone. The results sheets came though. Wow, 4th overall, behind the 400+bhp 75 IMSA Turbo, the 400bhp Montreal and one of the 147 GTA Cup cars. What a result! My main competitor in a 105 coupe, Tom Kuiper was 9th so we were pretty safe on the second row for Race One!

I elected to race first on Saturday and Andrew to race on Sunday. Rolling starts are the order in the Dutch Alfa Challenge and, as we rounded the final bend to start the first race, I expected the guys on the front row to belt away down the straight, but they stacked everyone really close at approximately 30mph virtually until the line! Suddenly they dropped the hammer and we were off down the long straight to the first sharp right hand bend. Pole was on the left, giving the Monty and me a clear run to the inside of the first sharp right hand bend, but it was pole that had the true clean side of the track. Fortunately the Caterhams has run on the right side of the pit straight all weekend in incredibly close slipstreaming battles so there was a good chance our side would be in good condition. Sure enough I kept up well with the Monty as traction was good off the line. The 75 IMSA pulled a bit of a lead due to its huge mid range turbo punch and the 147 on my right was dropped pretty easily. Behind, Tom Kuiper had made a superb start and was cutting past people on the run down to the first bend. 75 IMSA, cautious under braking, allowed the Monty and I to dive up the inside and we were off ahead of the rest of the pack! What a feeling, leading the IMSA through the first sequence of bends, the Monty was fast and I could nearly hang on but ultimately his power was just too great! 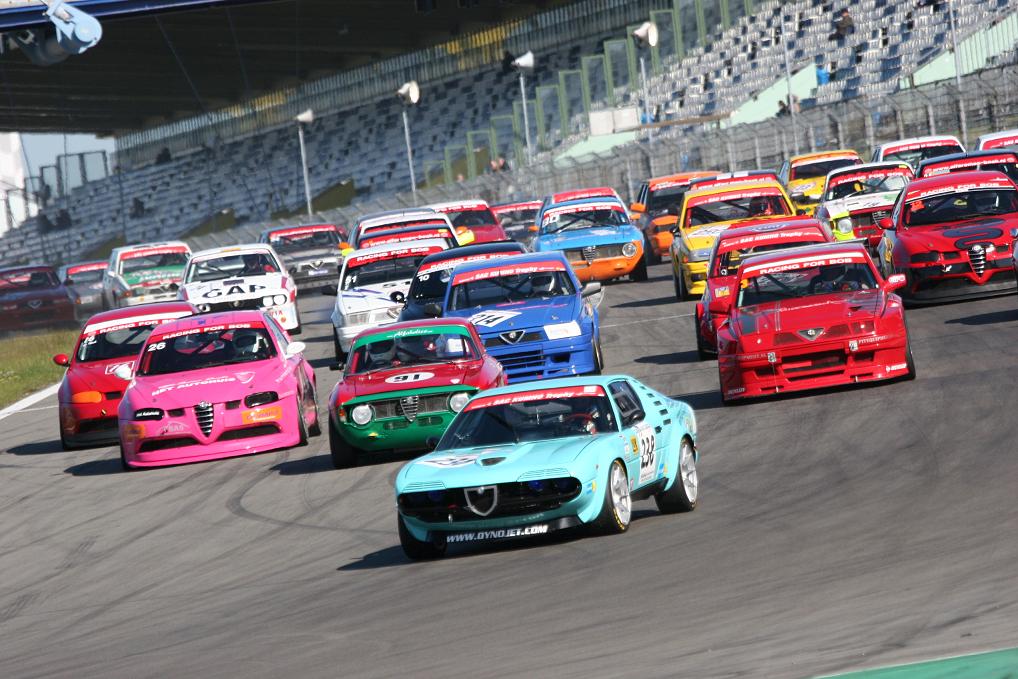 Soon it was evident that the IMSA had heat in his tyres and he caught me in a flash and swooshed past sounding more like a jet than a car! Then the fastest 147 of Joost Muijen caught me and got into my slipstream down the straight, so back to 4th but still looking great. Tom Kuiper was behind by 2 car lengths, but not catching. However, the next 147 was clearly all over the back of Tom and in a big hurry to get past. 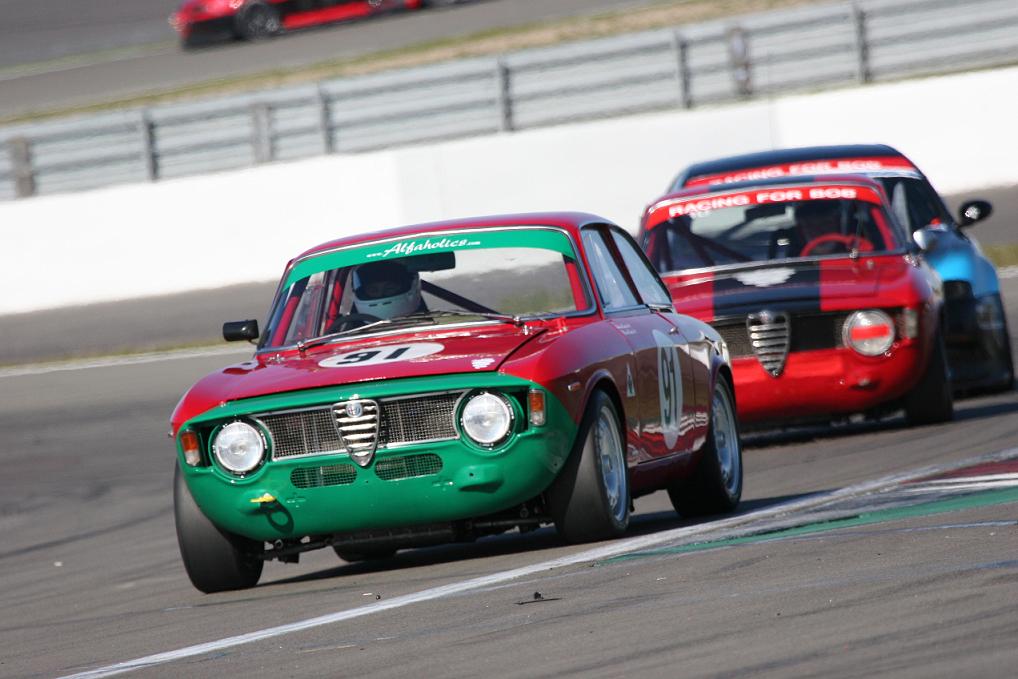 By lap 4 he was past Tom and making progress on me, particularly due to incredible corner entry speeds the ultra stiff modern touring car chassis can generate. Down each straight we were nose to tail, but he simply didn’t have the power to get past. Into corners I got deep into my braking zones, so no route past there either. Ultimately he needed to hang back and get a run on me coming out of a corner to have any chance to pass. Bang! Exiting a long left hand corner I’m suddenly speared from behind completely off track, I manage to recover behind him, and most importantly in front of Tom Kuiper; though somethings not right. Minutes later my race over and the end of our weekend. Nightmare! A weekend that promised so much ended with no net result, but isn’t that racing, and often the way the cookie crumbles! Still we proved we were the fastest 105 coupe in surely the fastest Alfa Championship in Europe. Impressive for our first proper season with a slick tyre setup; for sure we will be back next year to finish the job….. 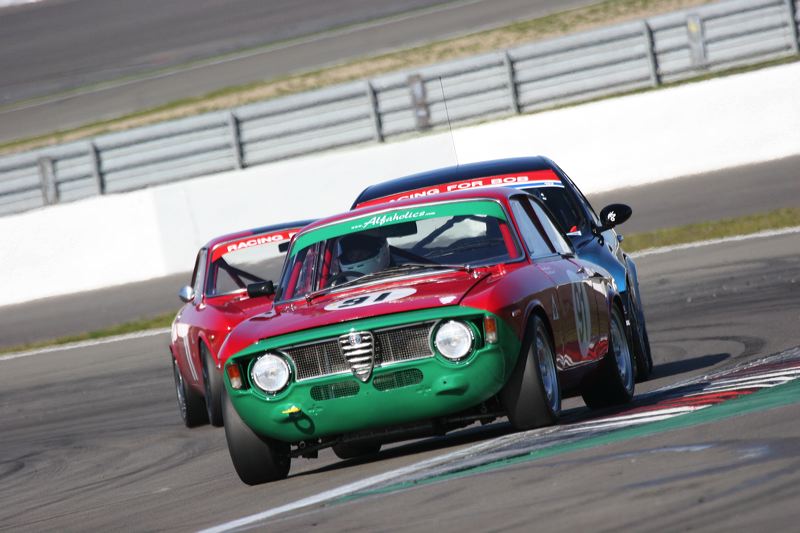