Qualifying was going to be tough, the late race entry acceptance of a 3 litre GTV6 and several 3.0 litre Capris on modern race tyres gave them a huge advantage against the 60’s cross-ply tyres the 105 series Alfa Romeos had to run. Nevertheless, Maxim Banks utilised his one free lap to great effect and took pole by 0.7s . Simon Arber was 6th fastest. 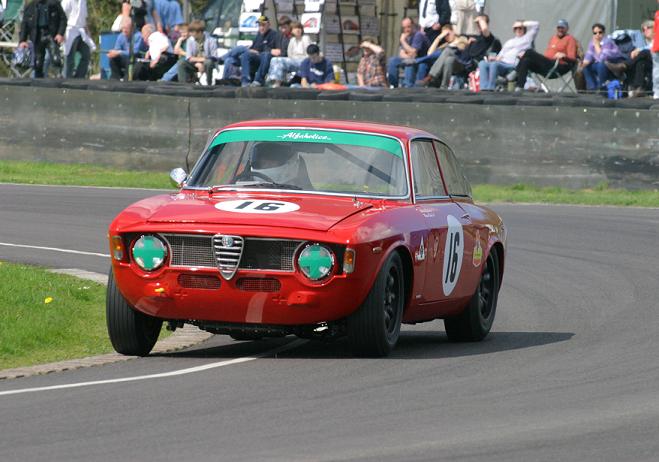 ON THE LIMIT IN QUALIFYING! 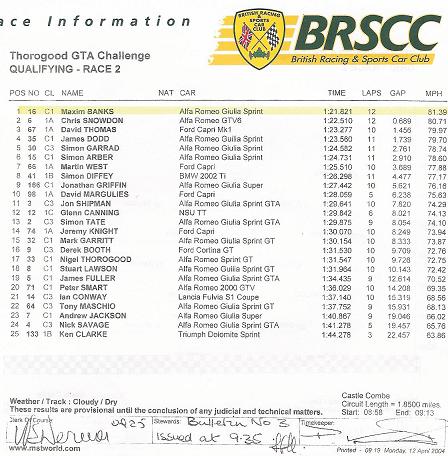 In the Top Hat Touring Cars, Andrew Banks also took pole position, doing so by over a second and a half from ex Lotus GP driver Jackie Oliver in a Mustang. 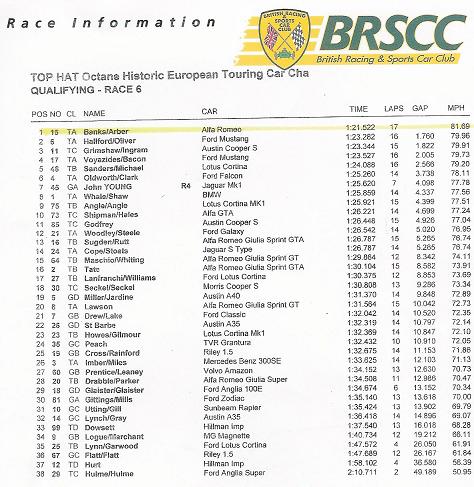 Two races, two pole positions for the Alfaholics Alfa Romeos! However, what promised so much, produced nothing later in the day.

After a slowish start from pole position, Maxim was 3th into Quarry which, after 5 laps, gradually became 2nd right on the bumper of Chris Snowdon’s Alfa Romeo GTV6. 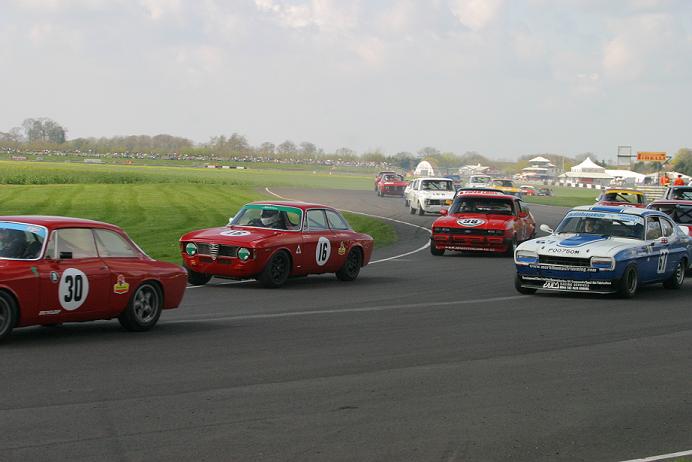 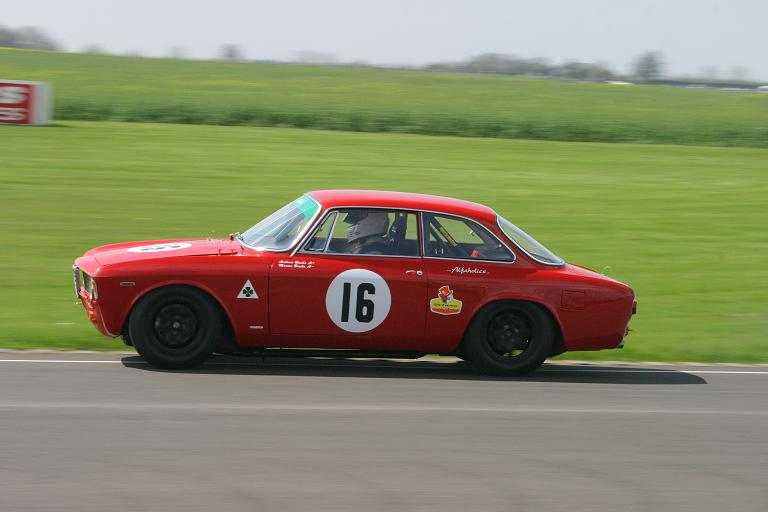 However, after only 10 minutes of the 30 minute race, a wildly understeering, but admittedly quick in a straight line 3 litre Capri, chose the one corner, Old Paddock, that precludes intelligent overtaking, to try such a manoeuvre. Understeering in a very high speed right hand bend, the Capri hit Maxim hard behind the right rear wheel, sending him into the tyre wall. The Capri then hit the tyre wall hard itself, bounced off and hit the Alfa once again. 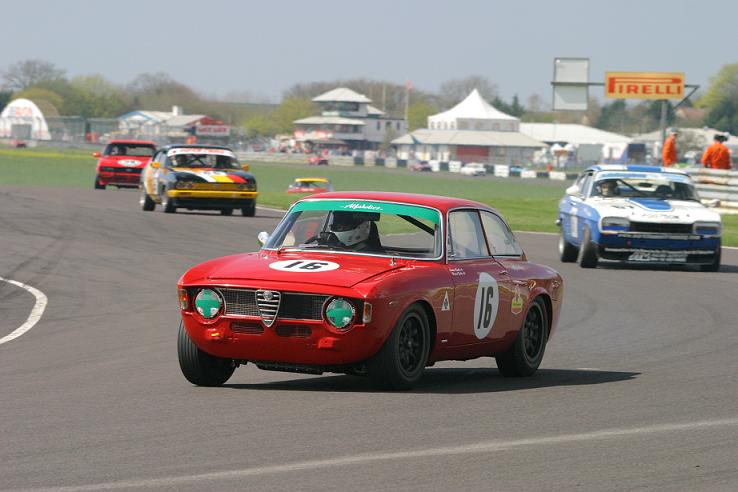 NOTE THE RIDICULOUS CAMBER ON THE RIGHT FRONT WHEEL, NO DOUBT A CONTRIBUTING FACTOR TO ITS UNDERSTEER!

Mixing cars with differing tyre grip requires a certain level of appreciation by the drivers. The problems occur when people drive around in their own little world. We were the unfortunate recipients and, as a result we are now faced with a 2 month bodyshell rebuild. The car requires jigging thanks to a bent chassis leg and also requires a new front panel and front right wing; two very hard to find panels, even for Alfaholics!

What a way to start a season with a car that promised so much. We had rebuilt it completely over the winter and were looking forward to a great season. We hope to be out for Dijon in early July, but it may not be until Chimay at the end of July. Fortunately, Simon Arber finished 2nd in the GTA class, after a reasonably uneventful race. 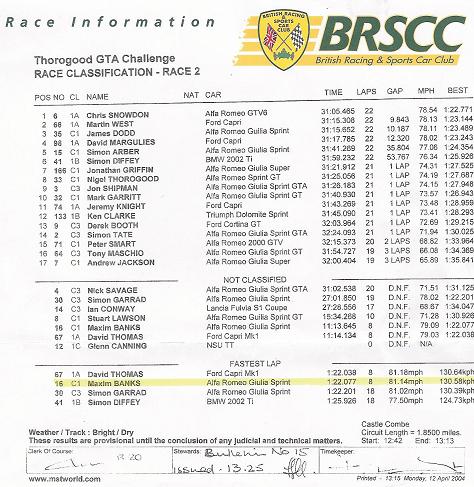 Andrew started off the race from pole position but was outdragged by the extra power of the Mustang on the long run up to the first corner, Quarry.
These two pulled away from the rest of the field, but Andrew was never able to head the Mustang which was too fast on the fast part of the circuit, but a well driven mobile chicane on the twisty section. 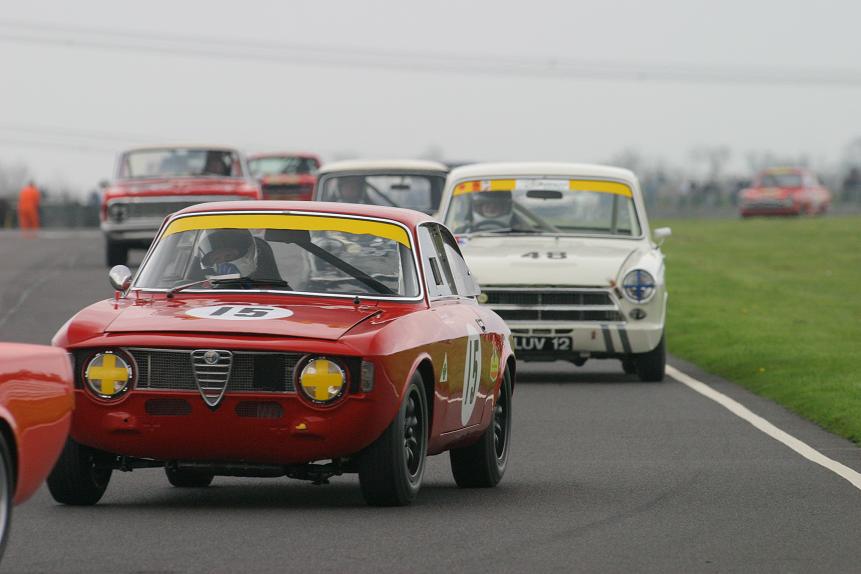 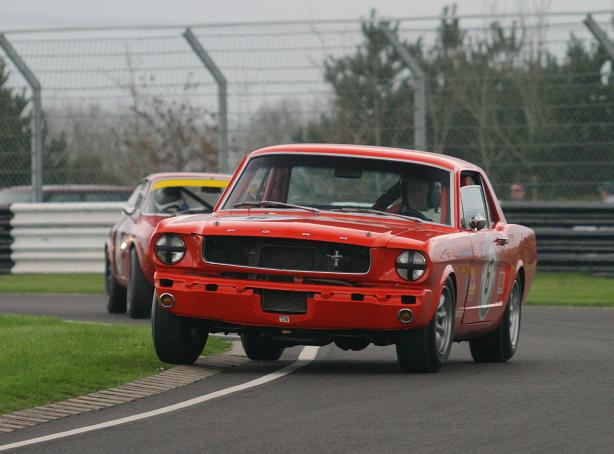 CLINGING ON TO THE MUSTANG!

It was all academic for, after 5 laps, the lever had to be held in the gears and after 15 laps only 5th gear was available to him. Despite this Andrew still managed to set the fastest lap. Poor Simon didn’t even get a drive and still requires one more signature to remove the novice’s cross off the back of the car. At least this problem is easy to fix unlike the other car! 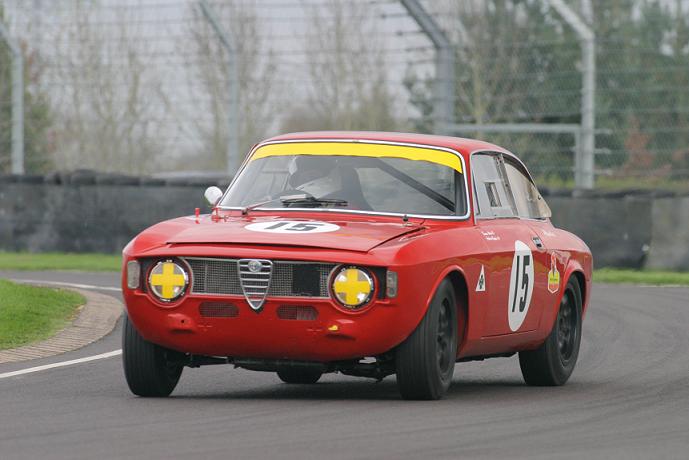 CHASING THE MUSTANG, HOLDING THE CAR IN 4th GEAR WITH ONE HAND, WHILST CONTROLLING THE DRIFT WITH THE OTHER!!!