The Classic Six Hours of Spa Francorchamps race meeting, held this year over 4 days from September 22nd has exploded in popularity in recent years. We had participated in the one hour Top Hat Race for the past 3 years, but due to a shortened race in 2004 and with much of it under the Safety Car, we decided only to return to the meeting if we were competing in the 6 Hours itself. 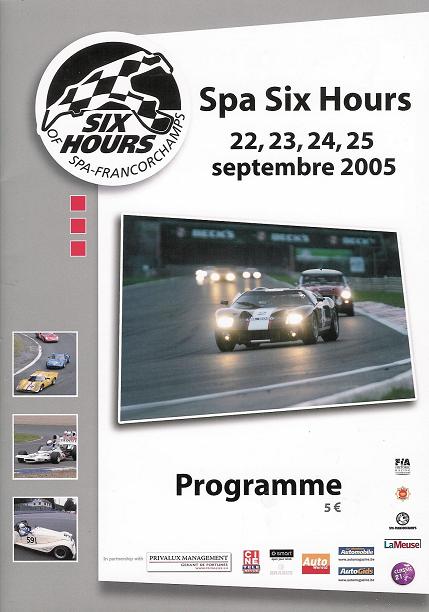 This year’s meeting was the biggest so far, with over 700 cars entered in a phenomenal 20 race programme. In fact, it is now the biggest historic race meeting in the European calendar, whose atmosphere is uniquely electric.

Alfaholics was lucky enough to receive an entry in the feature race which takes place from 6pm ‘til midnight on the Saturday. But we were only informed a mere 4 weeks prior to the event! Much preparation would be necessary, with many angles needing covering. Spot lights for the night driving, bigger fuel tank, endurance brake pads, taller gearing for the superfast Spa Francorchamps circuit for 6 hours, whilst identification lighting on the car would be essential to help the pit crew pick out the car at night, as with over 90 cars entered, the circuit was going to be extremely busy! Not least Andrew and I, as drivers, would need pit board identification and a lighting gantry for pit stop driver changes. We also decided to fit a bigger battery and alternator.

A phone call to PIAA enlightened me of the various options of lighting available. Gas discharge main lighting was the obvious choice due to its relative low current draw of 35W each and unrivalled power. Spa features several long corners including the super fast, unforgiving double apex left hander ‘Pouhon’ – lateral vision with good penetration would also be crucial. Small yet powerful spherical halogen units were also fitted for this. PIAA’s latest technology H4 bulbs were fitted in the main lights which draw a mere 55W, but project a beam equivalent to a 130W bulb.

I designed the layout for a 100 litre fuel cell to replace our 1hr aluminium tank, following a similar configuration of central location rising up between the shock absorber mounts and backing onto the boot floor. This ensured that the corner weight distribution would be least affected as the fuel load dropped, whilst keeping the extra weight as far forward and low as possible. This was made into a 3D CAD model to fit the boot floor perfectly and made by a leading FIA fuel safety cell manufacturer exclusively for Alfaholics. It features a submersible fuel pump with a proper fuel gauge within the driver’s range of vision. 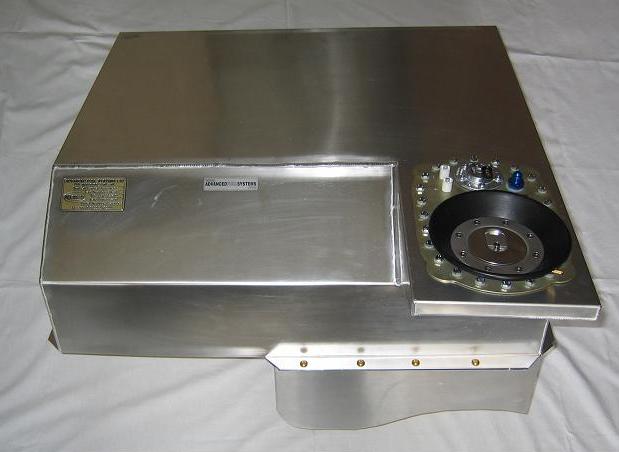 A short test session at Castle Combe the week before enabled DS3000 Enduro brake pads to be bedded in, tyres to be scrubbed and check that the fuel system worked satisfactorily, whilst a visit to a deserted country road confirmed that our lighting set up was indeed awesome!

All lighting and bracketry are available through Alfaholics 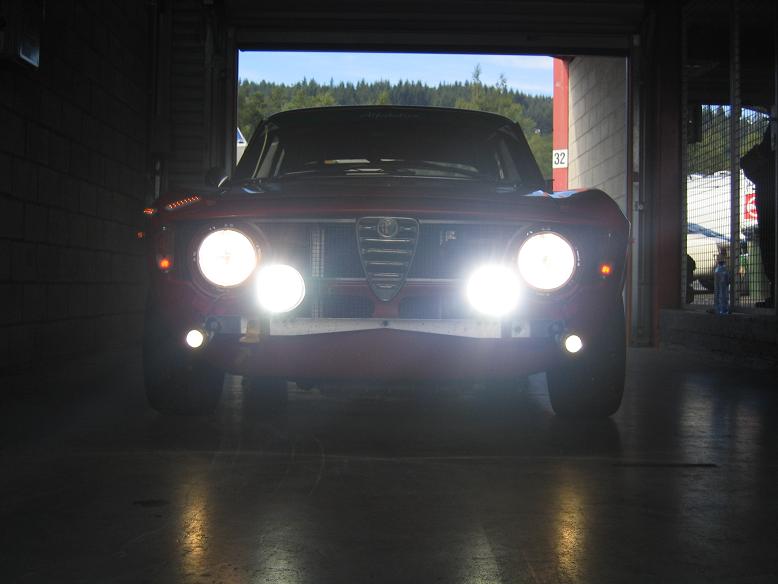 After a 500 mile drive, we arrived at the circuit late on the Wednesday afternoon, complete with enough spares to cover almost any eventuality! We set up our pit garage, which we were sharing with last year’s race winner John Shipman and Mark Hales with their ultra rapid Crosslé. They too were contesting the Eau Rouge Trophy which, baring any problems, they were bound to win. We would be happy just to finish and hopefully win our class into the bargain! 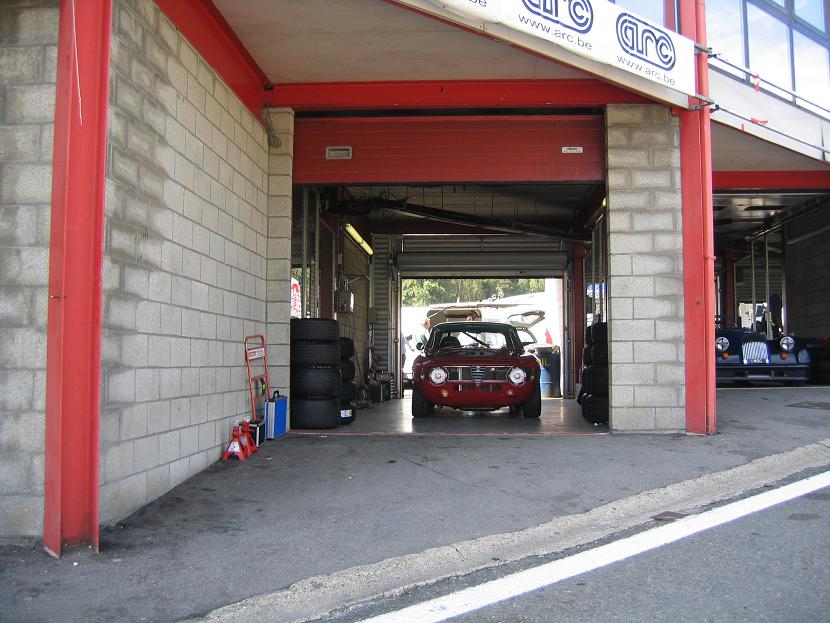 Two particularly busy qualifying sessions prevented Andrew or I from putting together an ideal lap. This meant we failed to reach our target of qualifying within the top 20 and resulted in 26th place and lining up for the rolling start alongside the lovely GTAm of Martina Bossart . Meanwhile, as we expected, the Shipman/Hales Crosslé secured pole by a healthy margin. Nevertheless, 6 hours is a long time for places to shake out and it was obviously very important to keep out of the usual troubles of the first few laps of a race. However, maybe with such a long race, people would not be pulling silly manoeuvres at the start! Or would they?

Andrew on the limit in qualifying 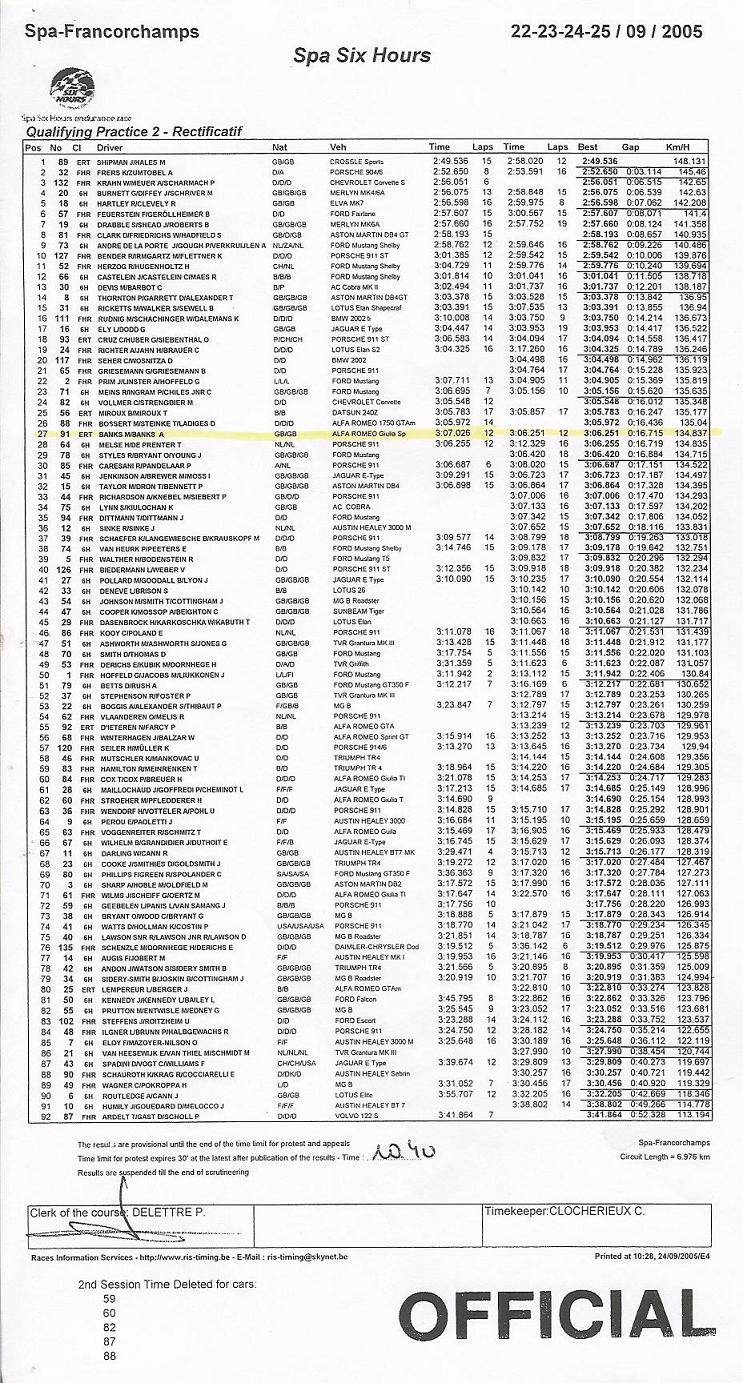 We arrived at the circuit mid-morning and spent the day checking right through the car, as well as calibrating the fuel tank. Spot lights were fitted onto the car as we did not want to damage them in any practice dramas. Race pads and tyres were fitted and the pit equipment made ready.

Max and Andrew prepare for battle! 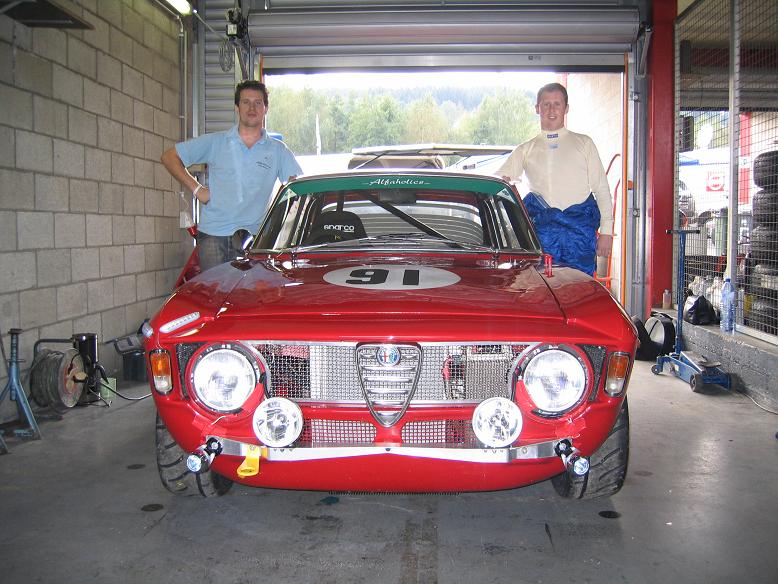 As 6 o’clock approached, the 91 cars left their pit garages and out onto the circuit at Eau Rouge. Andrew was to start the race, thereby enjoying the only daylight session. We would race 1½ hour stints with 3 refuelling and driver changes, whilst the majority of teams had 3 drivers so would split the race in 3, with 2 driver changes. We would need a good race pace to account for that extra stop.

Huge number of cars lining up to get out on circuit – it was going to be a busy race!

Andrew: “The first few laps were frantic and extremely close-fought as everyone jostled for position, defying any thoughts that people would be pacing themselves over the forthcoming 6 hours. Instantly we began making up places, until our progress was halted by a Porsche 911 which, while no match for the agile Alfa in the corners, proved just too quick down the straights to make a pass stick. The race began to settle down and the car was running as sweetly as ever as we piled on lap after lap. As dusk fell, the one and a half hour mark approached and it was time for the first of our scheduled pit-stops. A slick refuelling stop carried out in the F1 pits and driver-change in the old pits and Max was out on track for his first session at the wheel”. The bulletin issued by the organisers showed us to be in 20th place at the end of the first hour.

Max: “As I drove down the pit-lane I fired up the HID spotlights, instantly night turned to day and I flew up the Eau Rouge pit exit onto the long straight to Les Combes. The track was still in good shape and the Alfaholics GTA Replica had huge grip, awesome to drive. The HIDs gave the most piercing beam, enabling you to see right to the other end of the straights and pick out braking points just as well in the dark as in the day time. A brief safety car period allowed me to try turning the mini halogen corner lights off; it was amazing how affective these little units were for illuminating turn in, apex and exit lines. Without them we would not have been able to lap anywhere near as fast in the dark. My first 1.5hr stint neatly coincided with a safety car period so there was no hesitation to come in, another slick change, stationary for a mere 25 seconds and Andrew was back out on track.”

Richard: “Good pit signalling was crucial to us all. The Astralap on the pitwall counted laps and gave lap times to Diana and me and to Andrew and Max inside the car. The only problem was the in-car display not being back lit. However, it was readable from the general trackside lighting on the way down to Eau Rouge! However, the most important message was when to expect the car so, at a squeak over 3 minutes, I held out the board with 2 orange lights as identity for the drivers. It was not too difficult then to pick out our car, firstly from the position of the lights and secondly from their extreme brightness, which was as good as any and better than 95%.”

Andrew: “As I rejoined the circuit to start the 3rd stint, I flicked on the HID spotlights and it was almost like driving in daylight! Even in the pitch black around the back of the circuit, it was possible to attack the braking areas and place the car with complete precision. Then, nearly 4 hours into the race, a big accident involving a Ford Mustang and a TVR on the straight approaching Les Combes brought out the red flag. After the debris was cleared the race re-started and we were once again battling hard with the Mustangs and 911s. By this stage of the race, the circuit was getting really slippery, only to be made worse when the leading Porsche 904 blew up leaving a long trail of oil from the Fagnes chicane through Stavelot. It was in these conditions that the beautifully balanced and consistent handling of the Alfa really excelled. The confidence to push it to the limit and beyond was undoubtedly a key factor in being able to make up places in difficult conditions”.

Fantastic night shots of the Alfaholics GTA Replica in action during the race!

Max: “Due to the red flag and long Safety Car, our last 2 stints were shortened to 40 minutes each. It was clear that we were leading the Eau Rouge Trophy by a long way before I started my session, thus, all I had to do was keep it tidy and on the track for a win! Out the back of the circuit it was becoming treacherous in the last session, becoming more and more littered with crashed and retired cars and oil, lap after lap. Another safety car period before the end, left me with ½ a lap of green flag racing before the chequered flag and our victory in the Eau Rouge Trophy was confirmed by Richard as I crossed the line!” 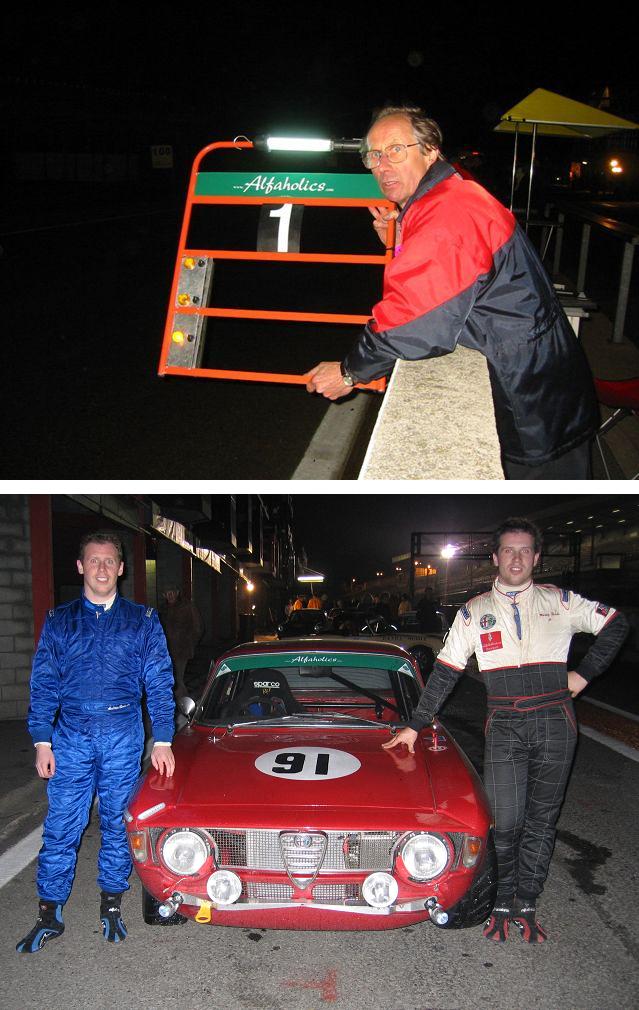 It was not until I had returned to the pit and our celebrations had well and truly begun that we were informed of the even more incredible news, that we had finished 8th overall! From 91 starters this was an amazing result, far more than we could have hoped to achieve in our first long endurance night race!

The car had performed faultlessly. It consumed neither oil nor water and we chose not even to clean the windscreen between stints. At the 5 hour mark, we had even been up to 6th overall, but by easing up when we knew the Eau Rouge Trophy was in the bag, ended up 8th. We would have been delighted just to finish, preferably inside the top 20, which was our original goal.

The party on Saturday night, as you can imagine, went on till very late, with much bière and frites consumed by all the Alfaholics team and friends!

We returned on Sunday morning to clear up to the pit garage and load up for the long flog home. On the way back, we stopped off at Waterloo(!) to see our friend William Mairesse, son of the legendary sixties Ferrari works driver, Willy Mairesse.

Photos of other cars in action during the weekend 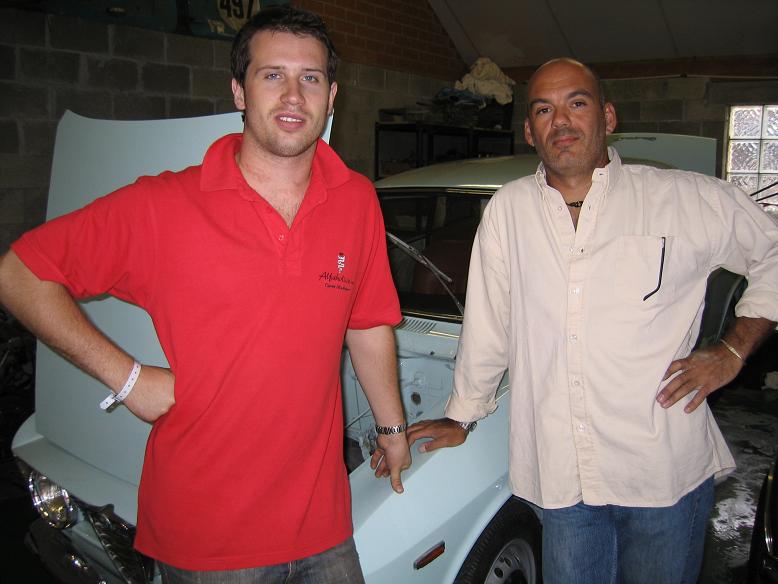