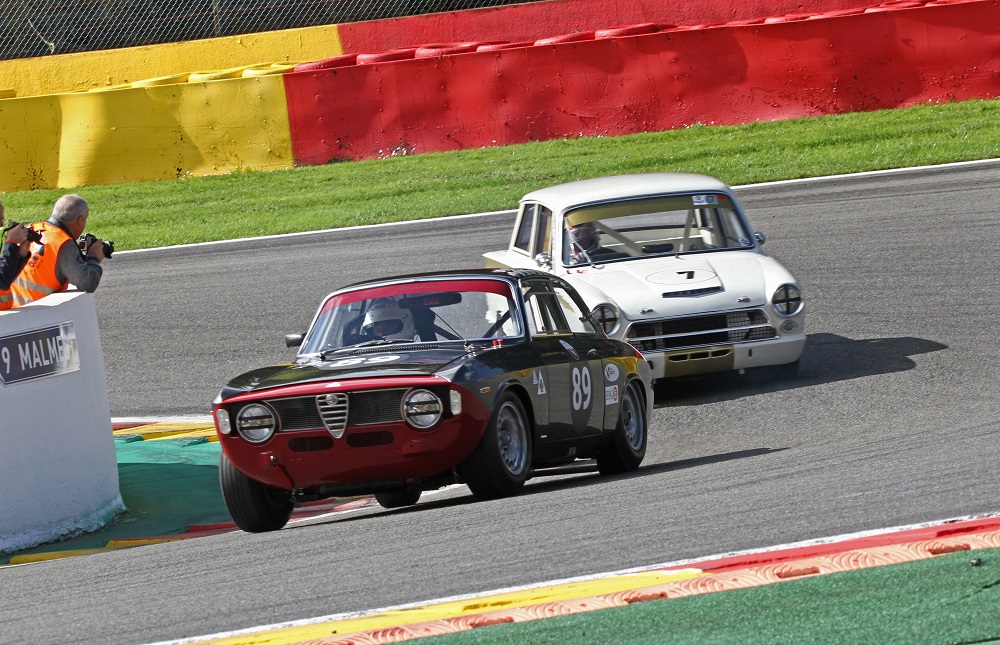 A wet qualifying session saw us line up on the front row of the grid next to Steve Soper’s Team Dynamics run Lotus Cortina for race 1. Andrew got a typically excellent start and battled hard with Steve for the first 20 minutes regularly changing places until we finally managed to build a 2 second gap in time for the pitstops. With Steve having a slightly slow driver change, Max was able to come out of the pits comfortably in the lead and keep a gap of several seconds to the hard charging Cortina in the second half of the race, finally taking the chequered flag 3 seconds clear. Race 2 was an even closer affair, starting from pole Andrew lead the first lap, but with the Cortina on his bootlid, Steve used the BHP advantage of the Cortina to good effect down the Kemmel straight on lap 2 to get past. Andrew used the GTAs superior braking and more agile corner entry handling to get the GTA back past, only for Steve to blast past on the next long straight. This set the tone for the full 40 minute race, with the cars never more than a few car lengths apart emerging from the last chicane in a different order most laps! We came out from the pitstop with Max now 0.5 second behind Steve, and after a committed out lap, Max was back on Steve’s bootlid and managed to squeeze up the inside into Stavelot to regain the lead. The long back straight allowed Steve to get past again and a repeat of Andrew’s epic first half battle was recommenced in the second half. After about 10 changes of position, Max took the win by a car’s length to secure a double win for Alfaholics.

In the Masters World Sportscar race, we qualified the McLaren M6B 7th in very tricky wet conditions for the 1 hour endurance race. Andrew got a belting start and was soon running 3rd behind a pair of very experienced Lola T70 Mk3Bs. Unfortunately Andrew’s half of the race kept being interrupted by safety car periods, but after the final safety car intervention Andrew managed to jump into the lead and start to build a gap to P2, very exciting on the pitwall! No sooner had he built a couple of second’s advantage it was time for the driver change. We unfortunately lost some time in the pitstop so Max emerged a nett 4th. Max managed to re-pass 2 of those cars that Andrew had got past in the first half but sadly the lead T70 was too far down the road to be able to challenge. At the chequered flag we were 2nd overall, a fantastic result in only our 2nd race in the car.

What a weekend! 2 cars, of very different types, built and developed in house at Alfaholics and driven by Andrew & Max taking wins and podiums, against the very toughest competition in historic racing, the whole team were thrilled to bits!