Alfaholics Race in the Monterey Reunion at Laguna Seca – August 2013 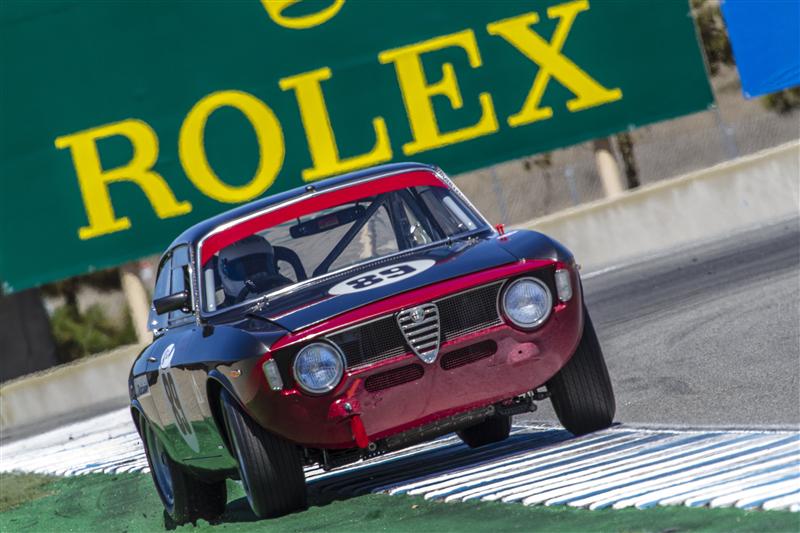 This summer, we were invited to take our FIA App.K 1600 GTA to California to race in the annual Rolex Monterey Motorsports Reunion, which takes place at Laguna Seca over the Pebble Beach weekend. Although this would mean us missing two important European meetings, namely Silverstone Classic and Spa 6 Hours , it was a one off opportunity that we could not refuse!

We were entered in both the Pre-Reunion meeting as well as the Reunion feature meeting the following weekend. Although there was no free practice, a couple of sprint races in the Pre-Reunion would hopefully be enough to learn the circuit in preparation for the main weekend.  On arrival at the circuit, it soon became clear that we would be up against some stiff opposition made up of mainly GT cars, including countless Porsche 911s, Lotus Elan 26Rs and Ginetta G4s, most of which were running semi-slicks.  We would be the only car on Dunlop CR65s!

So, it was straight into qualifying for the first race of the Pre-Reunion and Max spent the first half of the 18 minute session bedding in new brake pads and scrubbing tyres before setting a lap time good enough for 12th on the grid of 30 cars.  In the race, he managed to pick up some places and finished 9th overall amongst the Porsche 911s. Andrew used his qualifying session to scrub our second set of tyres for the following weekend and learn the circuit. In his race, he started in Max’s finishing position and finished 8th and was the first Alfa home, having had a long battle with another GTA and a GTAm.

For the main Reunion weekend, the entry list was revised and fortunately the huge Porsche 911 contingent had their own race.  However, our group grew to 40 cars with a mix of sports cars, GTs cars and saloons which included a 1970s Jensen Healey and even a Chevron B8! After the 2 qualifying sessions, we had set a lap time of 1m48.0secs which placed us 14th on the grid for the first race. We were the fastest GTA and in the middle of a group of BMW 2002s, just behind the Lotus Elan 26Rs and Ginetta G4s.

In the first race we managed to slip in front of all the BMW 2002s and battled hard with a Ginetta G4 to finish 11th overall and the first period correct saloon car, dipping into the 1m47.0s in the process. The main feature race was looking very good for us, starting 11th on the grid, but it turned into a nightmare for many of the front runners! A car blew its engine on the warm up lap while going through the long left hand corner after the Corkscrew but the marshals had not noticed the oil slick on the racing line so there were no oil flags on the opening lap!  As the leaders came through the Corkscrew we were up to 9th, but then everyone hit the oil and 5 of the first 10 cars spun into the sand trap, including us.  Fortunately there were no cars damaged, but the race was stopped while the stranded cars were recovered and the sizeable oil slick cleaned up.  The severity of the spill meant that this took quite a while so there was only enough time for a 2 lap sprint race after the restart – certainly no chance to work our way back through the field. A frustrating end to a very enjoyable two weeks in California, but racing can go that way – at least no-one suffered any damage in the chaos! 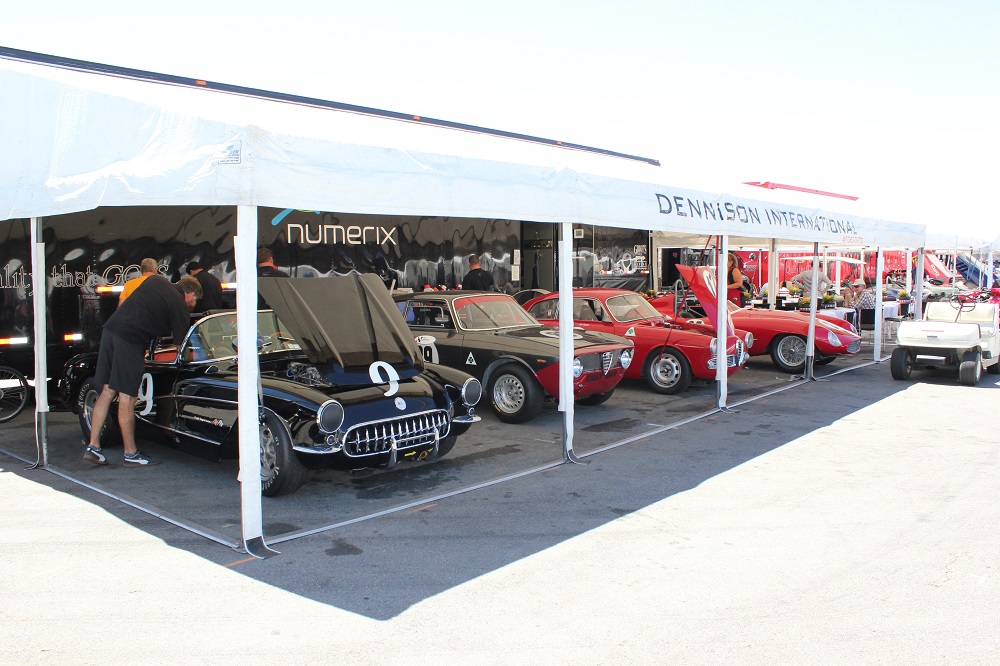 Leading the Porsche 911s at the Pre-Reunion 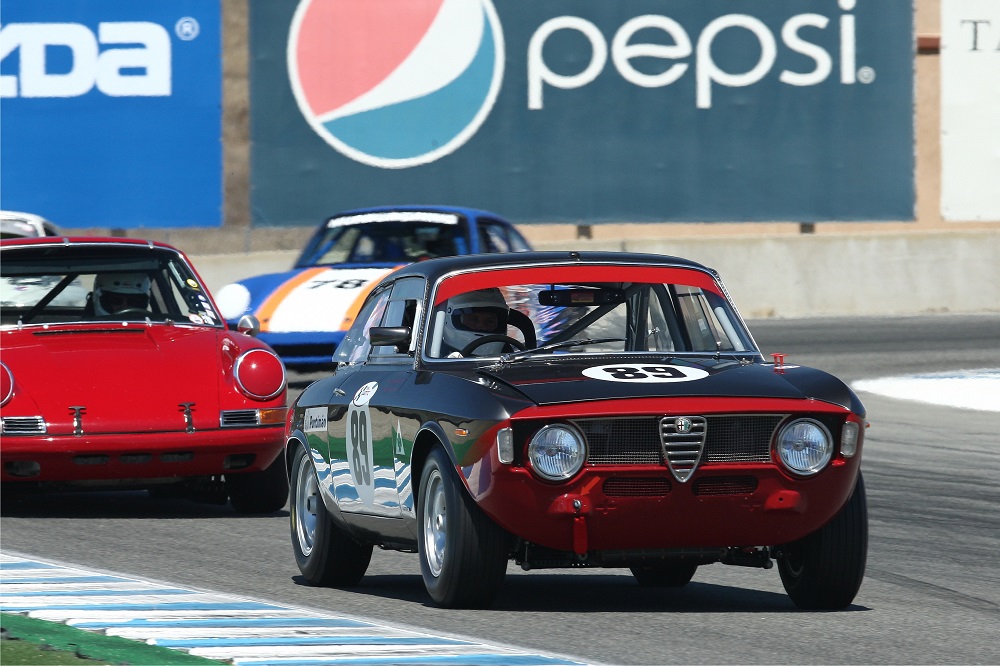 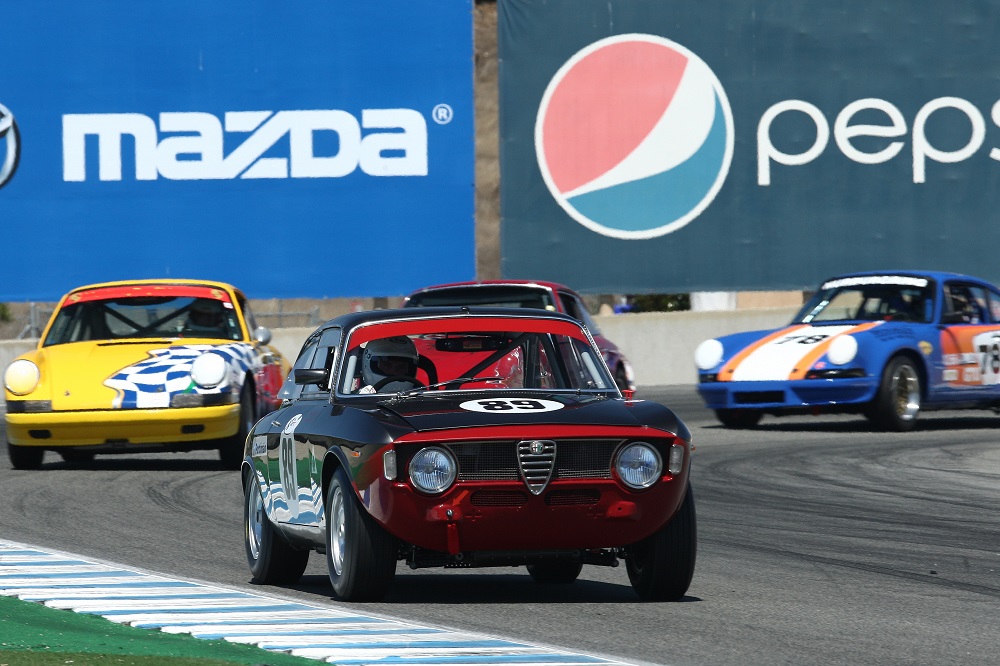 Andrew powerslides through the Corkscrew! 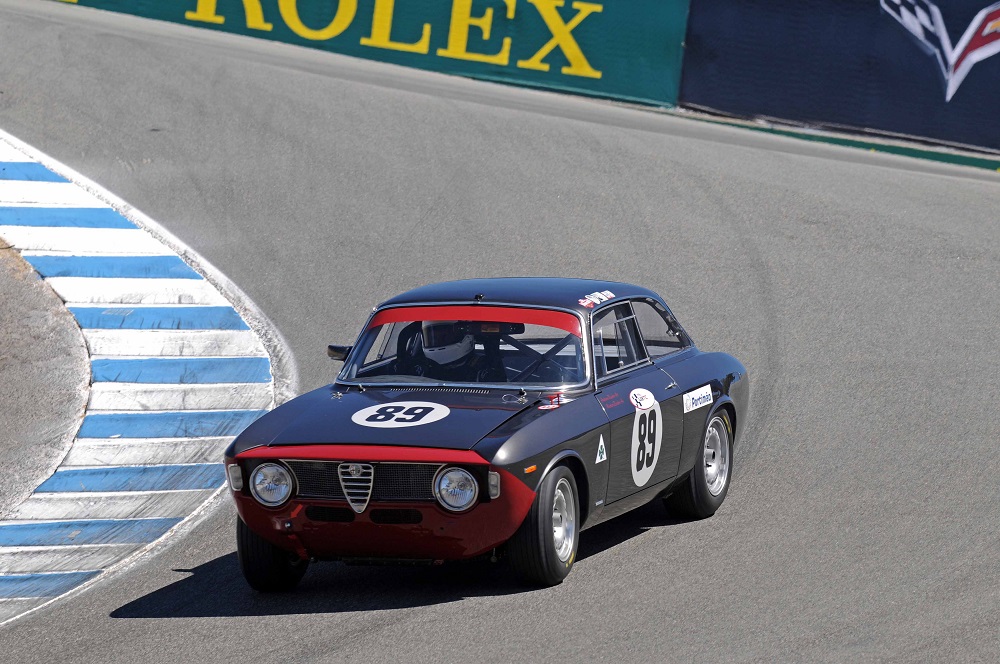 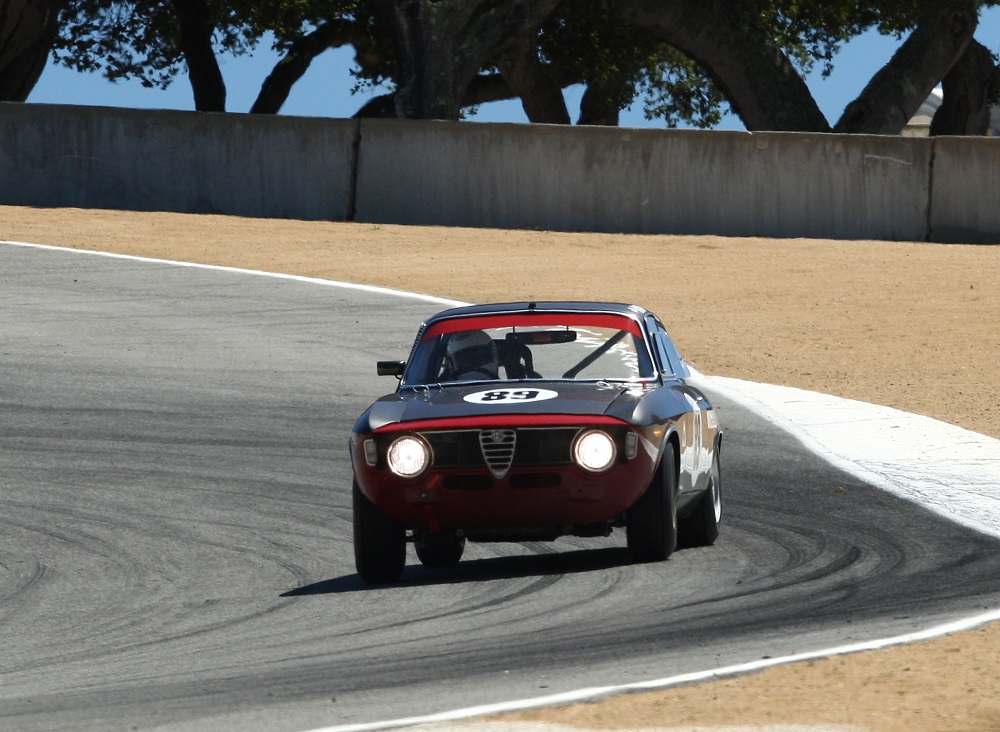 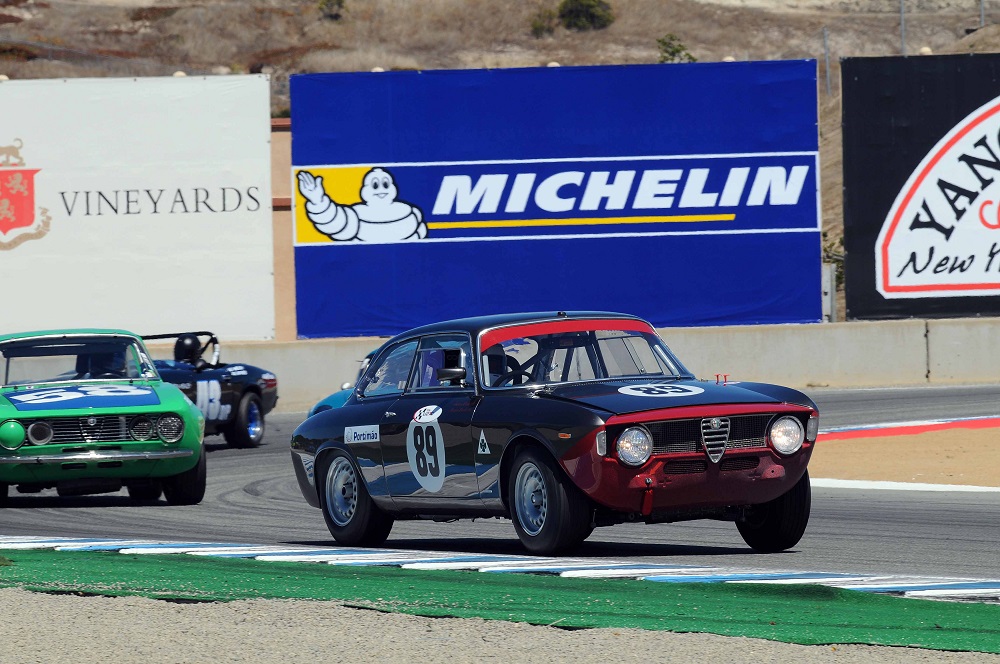 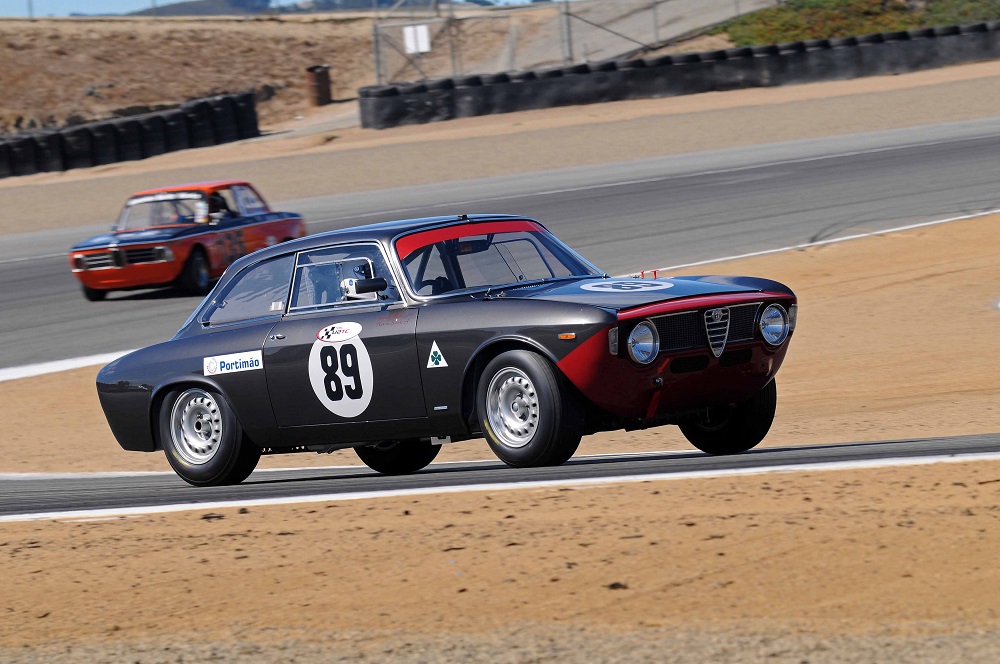 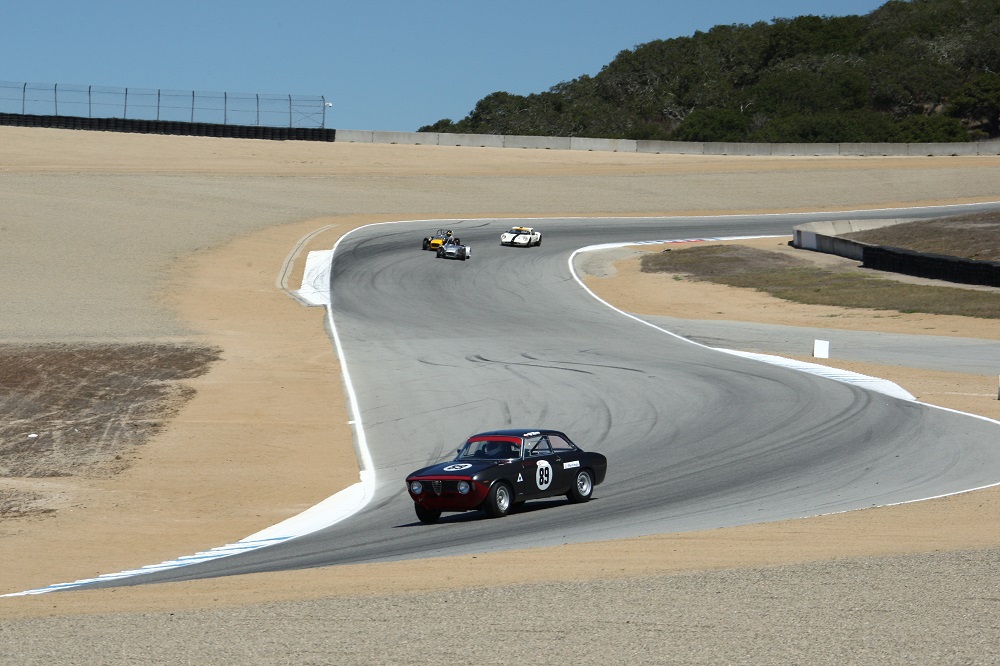 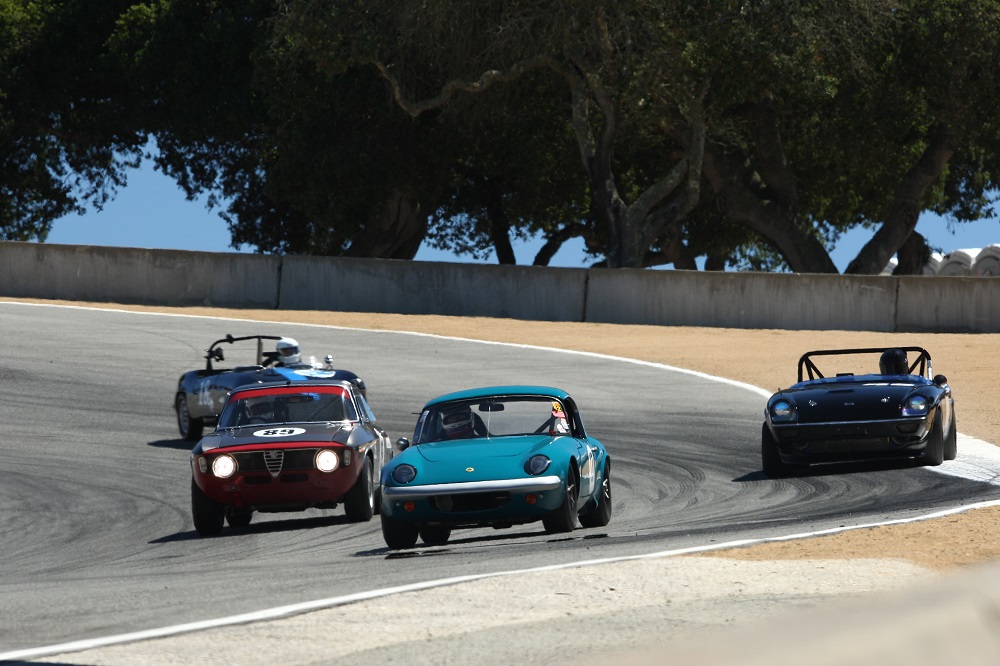 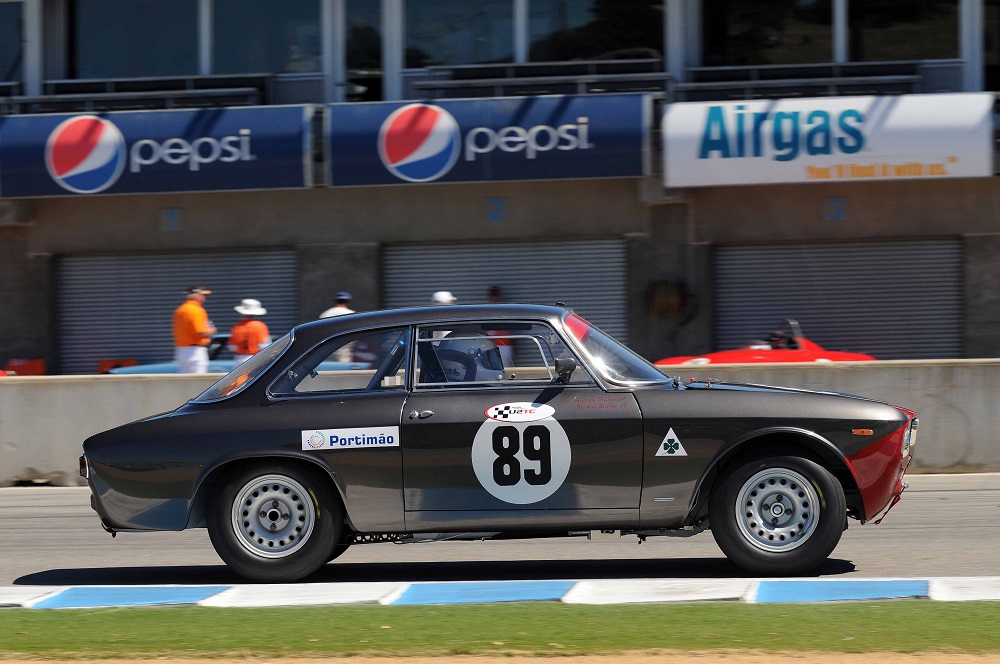 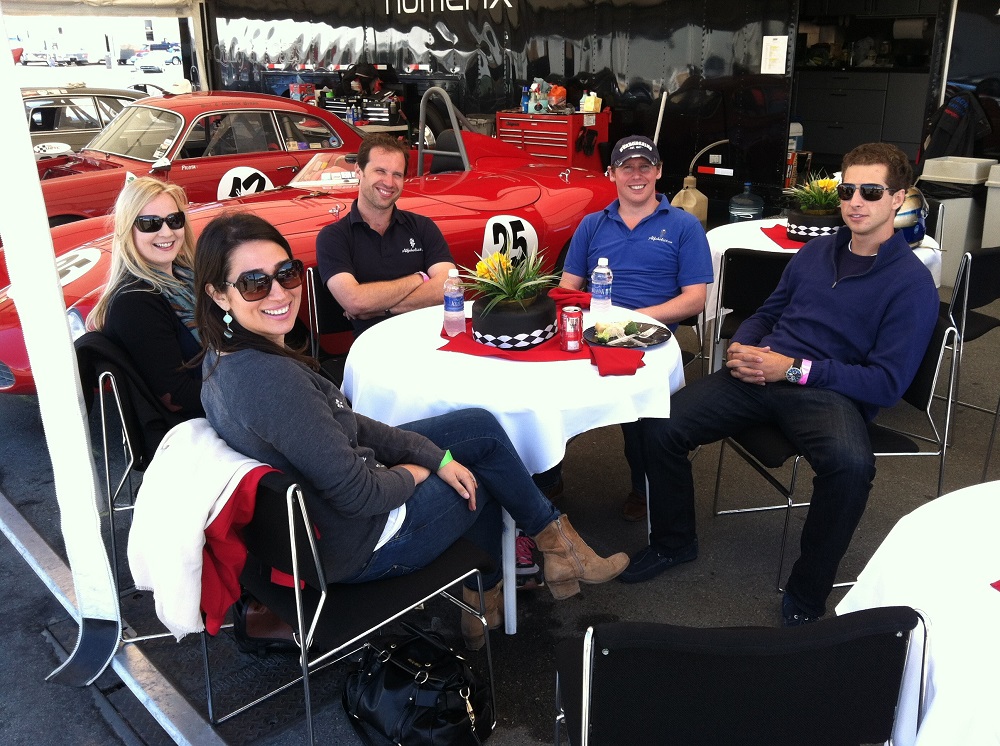 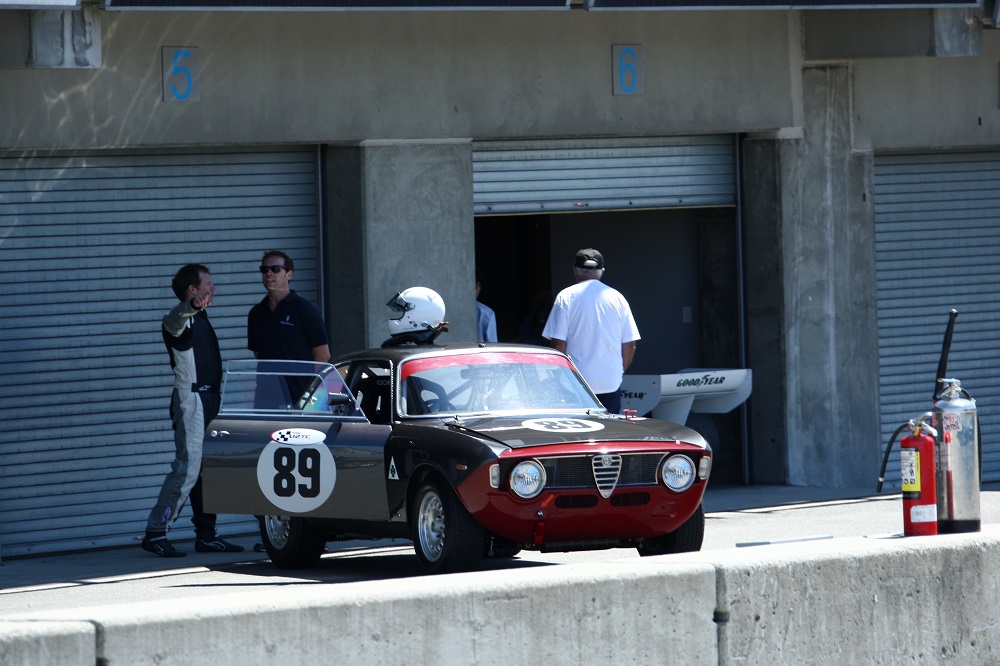 The start of the final race of the Reunion Weekend 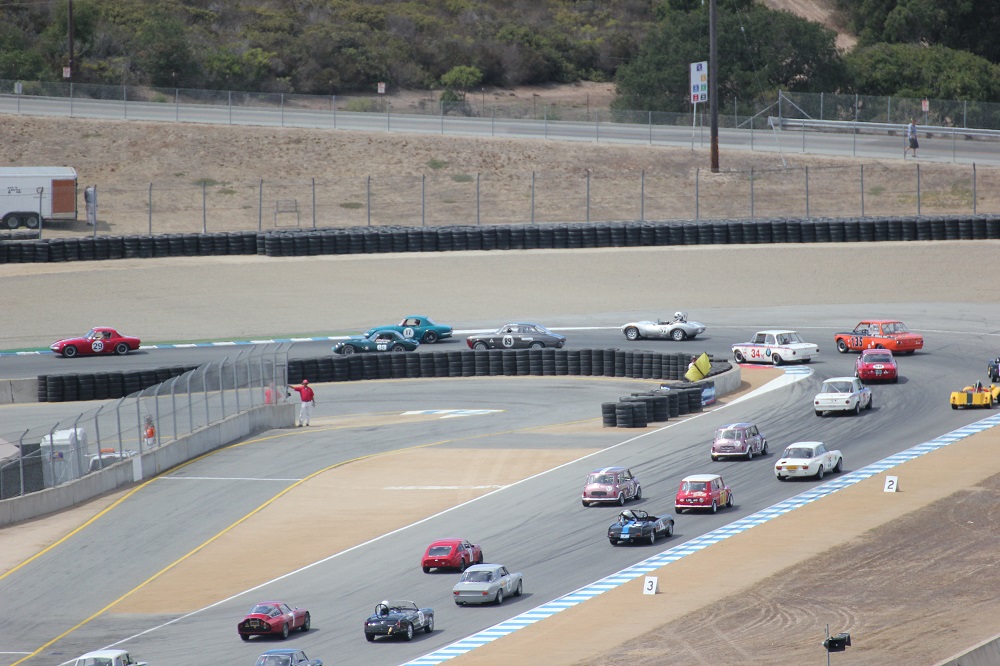 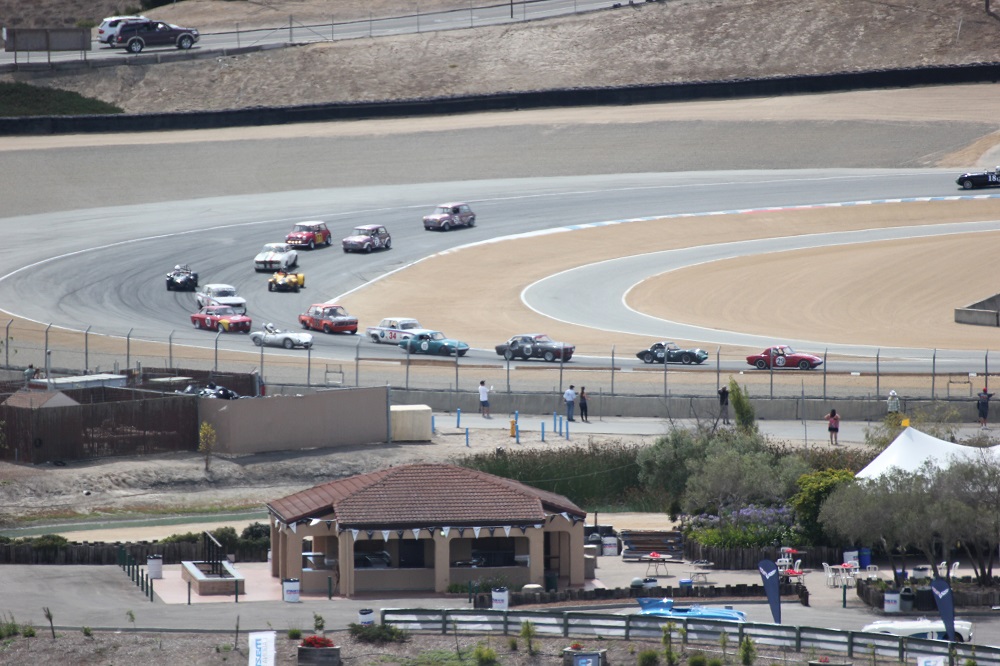 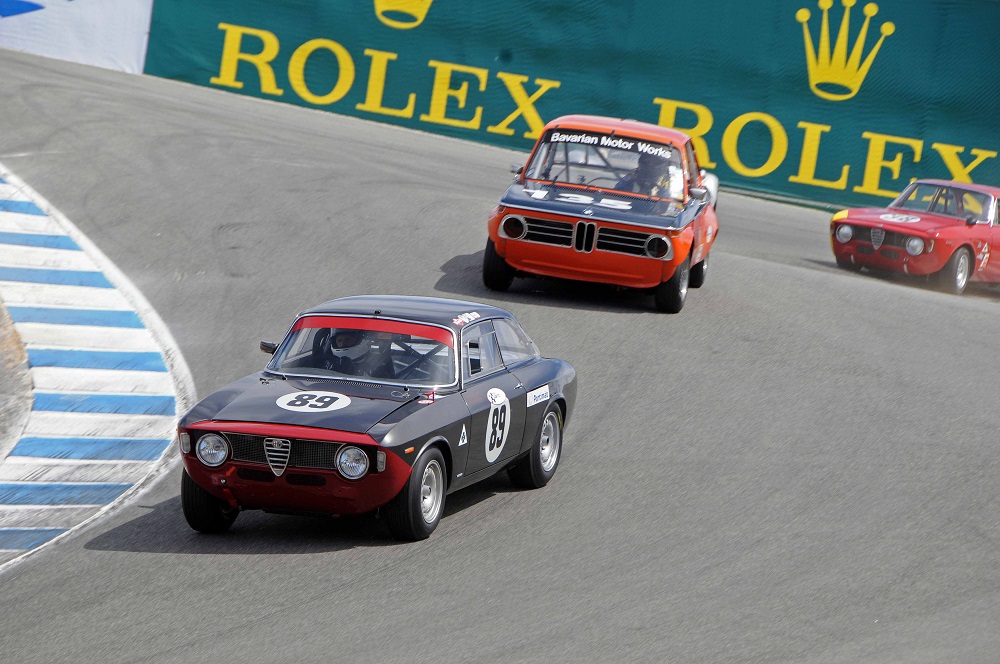 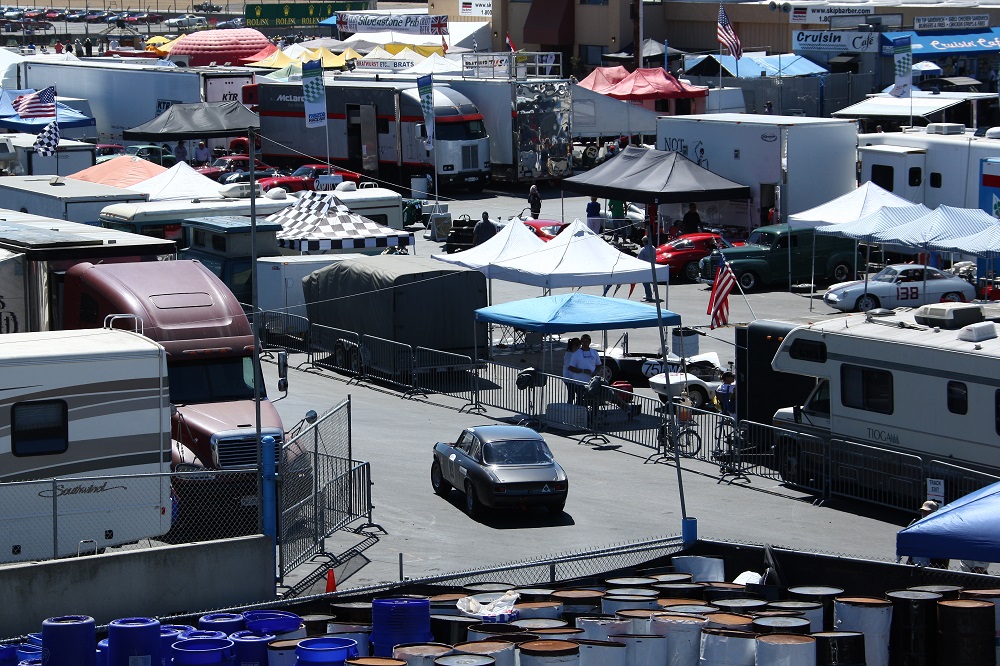 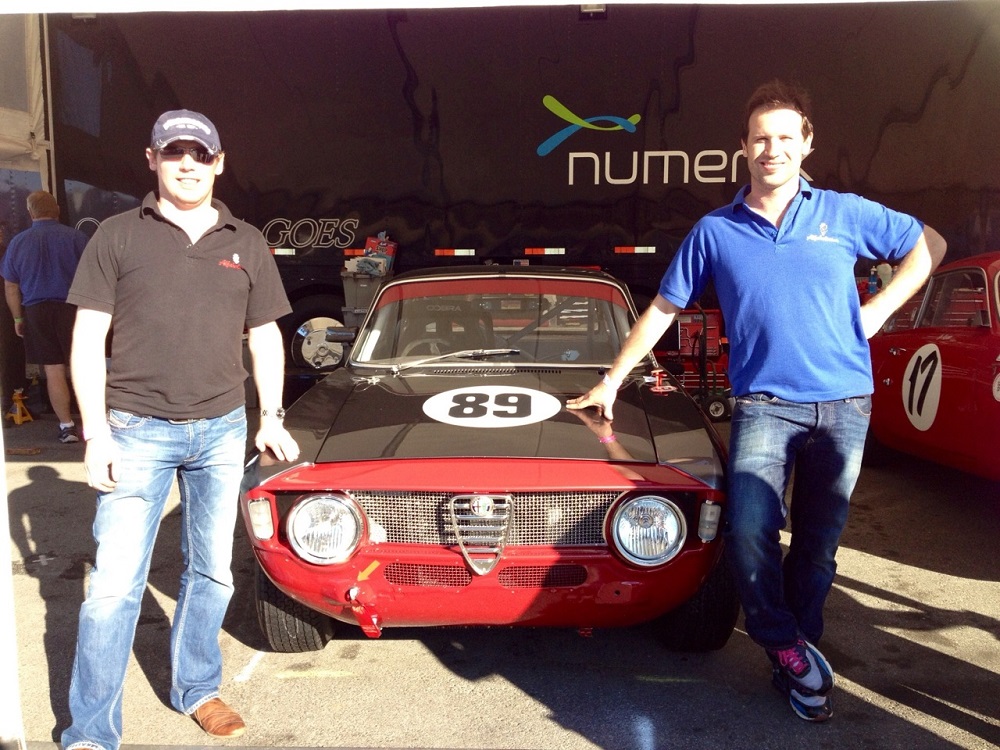