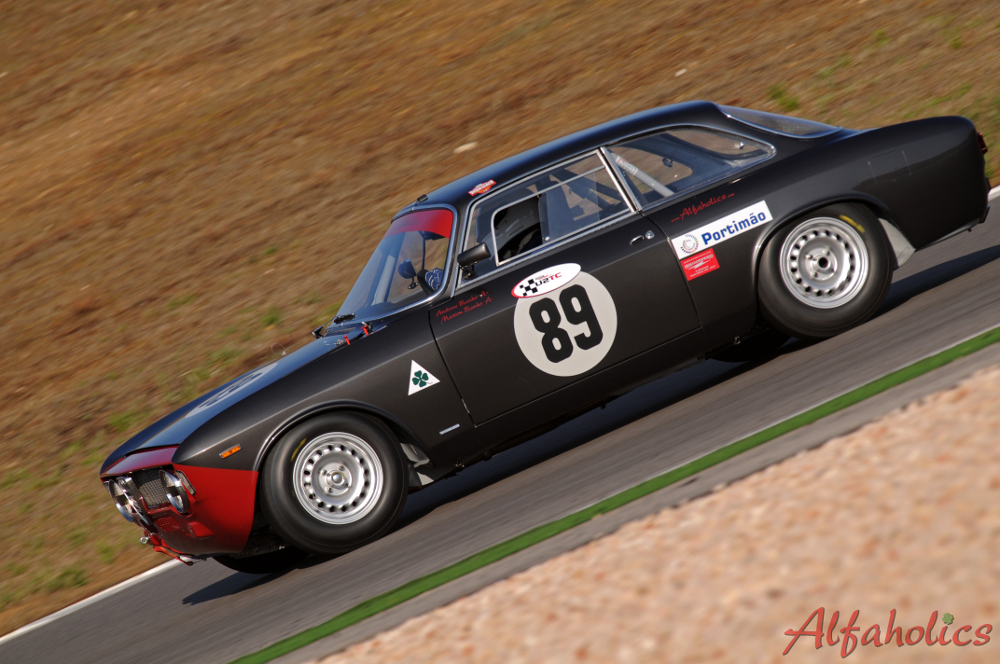 For our last race of the year, we couldn’t resist the temptation to leave a typically damp October in England and follow the sun south, taking our newly built 1600 GTA down to Portugal for the annual Algarve Classic European FIA meeting; its first proper event since we completed the build. At Portimao, we would enter the U2TC race – this series being widely accepted as the most ferociously competitive pre-66 FIA Touring Car championship in Europe.

After a 32 hour journey we arrived in Portimao, a lovely and sunny 22 deg C. With perfect weather forecast for the next week and a race timetable spread out nicely over 4 days, it was set to be a thoroughly enjoyable and relaxing race weekend!

On Thursday, we headed to the track for the first time for mixed class testing. This gave us a great opportunity to learn the circuit, although with just four short sessions throughout the day, it soon became clear that this was going to be quite a challenge.  It was not going to be like a typical race track such as Zolder or Dijon where, after just a few laps you could be sure to nail the perfect lap in qualifying. The succession of 3 fast blind crests at Portimao are all followed by very technical corners, each requiring the car to be set up and positioned very carefully before the brow, so learning these to perfection would be critical to achieving the ultimate lap time.  Frustratingly, a couple of the sessions were cut short by red flags but, by the end of the day, both Andrew and I felt that the laps were starting to come together.

Friday was free practice – our first opportunity to see how competitive we were against the opposition.  With most of the top runners having experience of Portimao from previous years, we knew it was going to be tough!  At the end of the fast paced 1 hour session ,we had posted the 4th fastest time so we were looking good for qualifying! 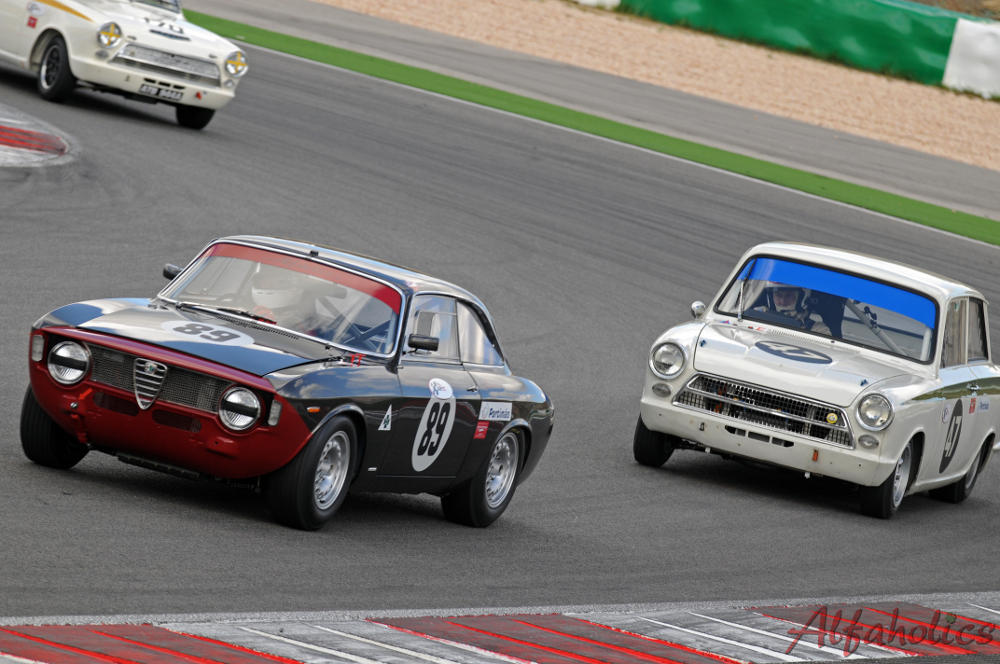 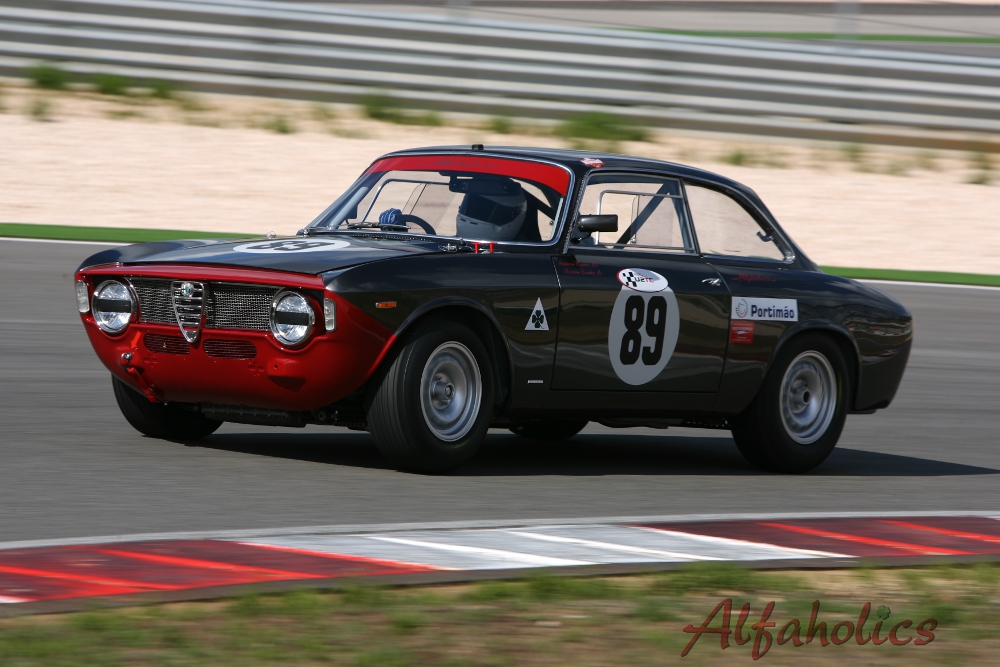 Saturday morning started with qualifying and, with a large U2TC grid, the session was going to be busy and not necessarily easy to get an unhindered lap.  We got Andrew out of the pit garage early and he lined up 2nd in the pit lane queue.  As they let the cars out on track, Jackie Oliver in a very quick BMW 1800 TISA managed to jump out ahead of the pit lane queue, closely followed by one of his team mate’s cars! As the cars came past the pits for the first time Andrew had cleared one slower car and had worked himself a bit of space, hopefully enough for a couple of quick laps. On his first flying lap he came past the pits clearly ‘on it’, headlights ablaze… 1.5 seconds quicker than free practice, awesome! His next lap got compromised clearing traffic, but was still fast and now he had a gap that would definitely last for several laps. Each time he passed the pits the lap times tumbled, now faster than any car had gone in free practice.  On the pit wall we got excited but several other cars also looked to be lapping very quickly as well so it would be a good battle at the front.  Twenty minutes in, as Andrew started to get caught up in long lines of traffic, he came in to hand over to me. With our time clearly set on those free laps and with Andrew really in the zone, I headed out to familiarise myself with the track once more and put some quick laps in.  After a handful of laps and feeling sorted for the race, I brought the car in.  The time sheets confirmed we were 4th quickest overall; just a tenth of a second shy of 3rd and three tenths off 2nd.  No-one however could touch the fastest Lotus Cortina of Andy Wolfe which was 1.5 secs clear on pole.  This car has proven to be almost unbeatable for 2 years in the FIA scene and it seemed that this race would be no different!

Lining up in the pitlane for qualifying..

For the race on Sunday, Andrew would again start and hand over to me at 30 minutes to complete the 1 hour race.  The race was scheduled to start at lunchtime and, as the sun beat down, it was certainly hotter than any previous day. It was going to be a hard race on both the drivers and cars! Starting on the outside was not ideal with the long right hander at the end of the pit straight, but no doubt everything would shake out in the first few laps for a natural running order.  Andrew got a good start and all the cars on the first 3 rows dragged very evenly nose to tail off the line.  Andrew was blocked to the outside and was squeezed out by the John Clark BMW which started on the inside of row 3. As expected, Andy Wolfe pulled away at a steady rate and the main race looked like it was going to be between the following 4 car train, the Jackie Oliver BMW, followed by Clark’s BMW, John Young in the Cortina and our GTA. Lap after lap the train came round, little change in the order or gap between each car. A few laps before the pit stop, Andrew had dropped off the back of the BMW in front by a few car lengths and I got helmeted up ready for the driver change.  Andrew was soon in and we completed a fast driver change – stationary for a mere 16 seconds.  As my belts were done up, he warned me to avoid drafting because of excessive oil temperature. As I headed out of the pits, the oil was still very hot.…130 degrees – no wonder he had dropped off the train a bit! I pumped in a succession of quick laps, clearing a handful of back markers in the process.  The train had thinned out with a couple of retirements and as I came past the pits, the remainder was just entering the first corner. We lay 4th overall at this point, 2nd in the 1600 class, catching the train would be a tall order and with both of those cars being in the 1800 class it didn’t seem like the biggest priority either. I elected to lap consistently, gapping the car behind and keeping the oil temperature under control, this ultra-high revving 1600 engine certainly asked a huge amount from the oil cooling system in this weather! As the chequered flag dropped we had finished 4th overall and 2nd in the 1600 class – a superb result for the GTA.  We will make some small improvements over the winter, ready to do battle next year again at the front of U2TC! 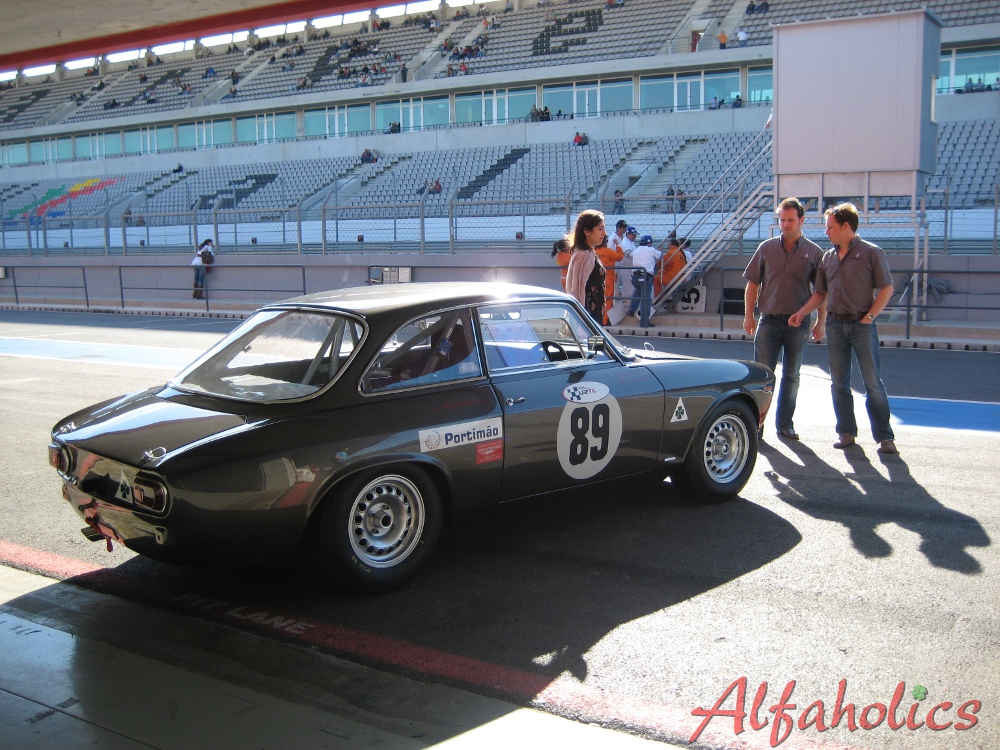 Lining up on the grid in 4th place 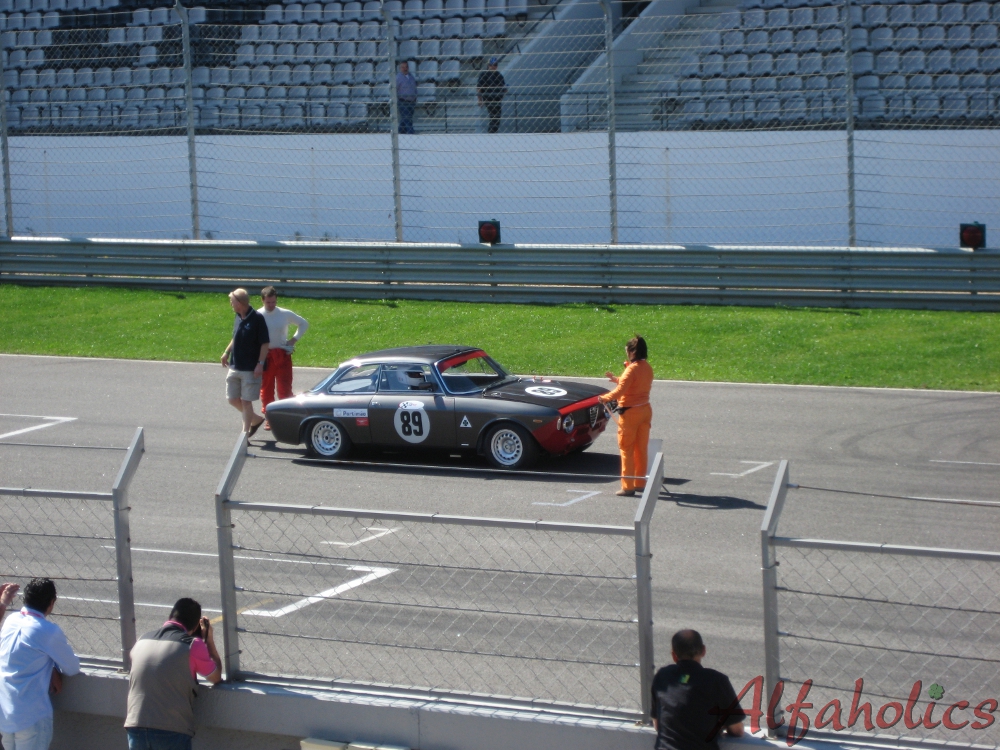 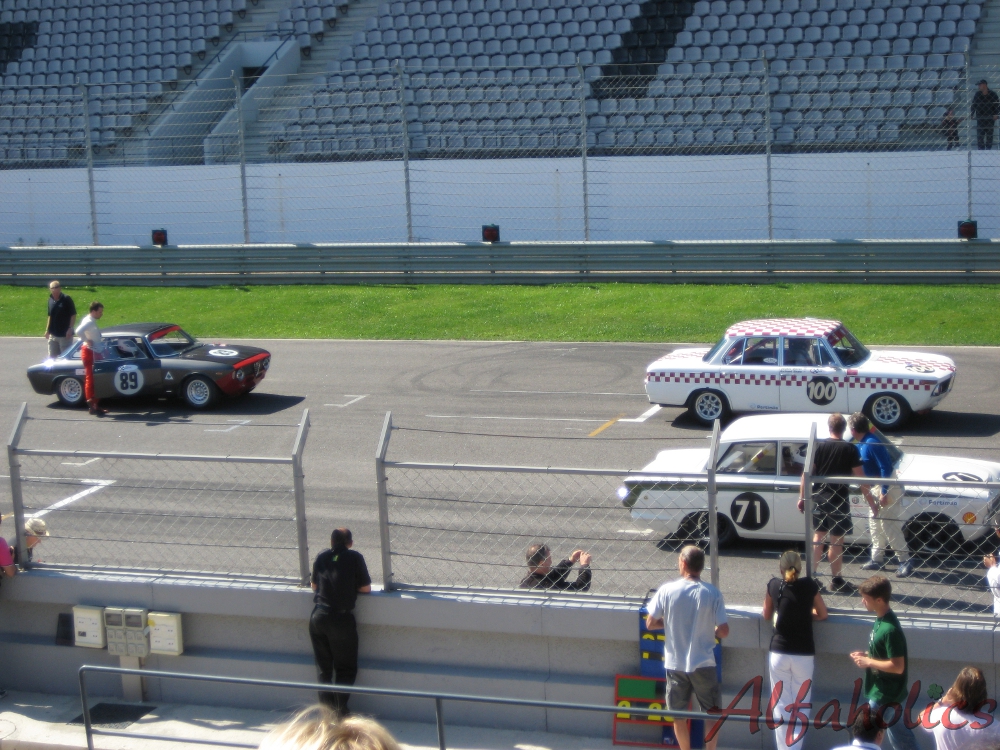 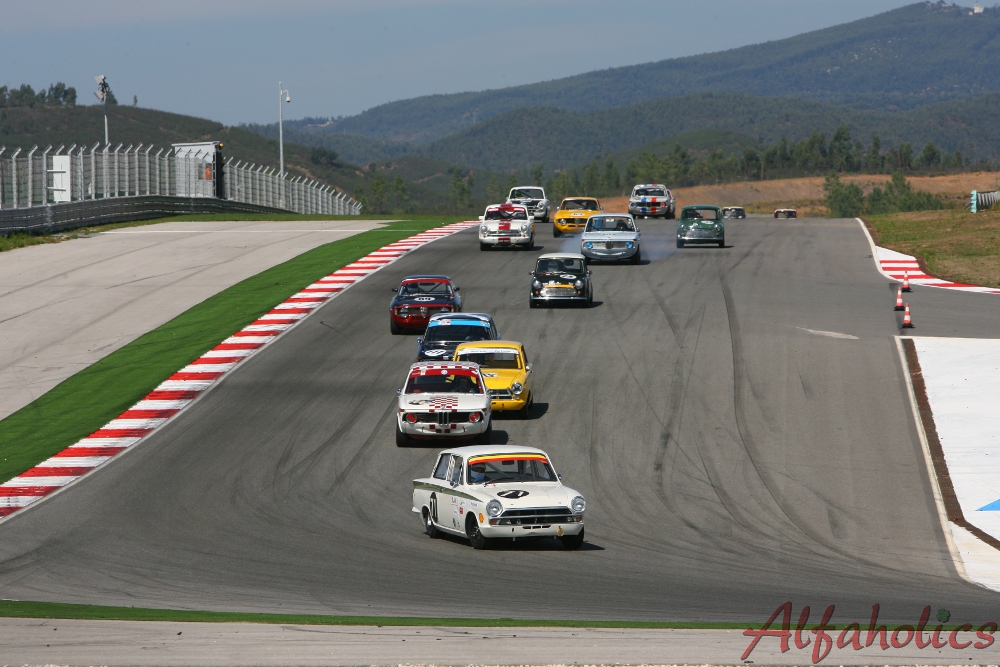 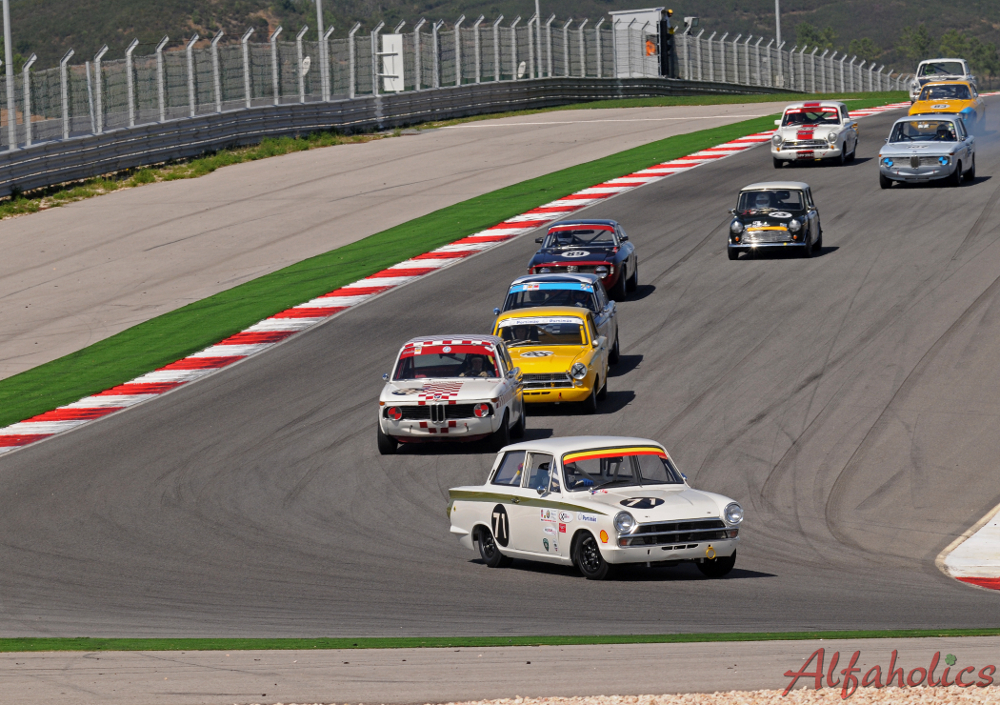 Andrew leads Leo Voyazides out of the hairpin 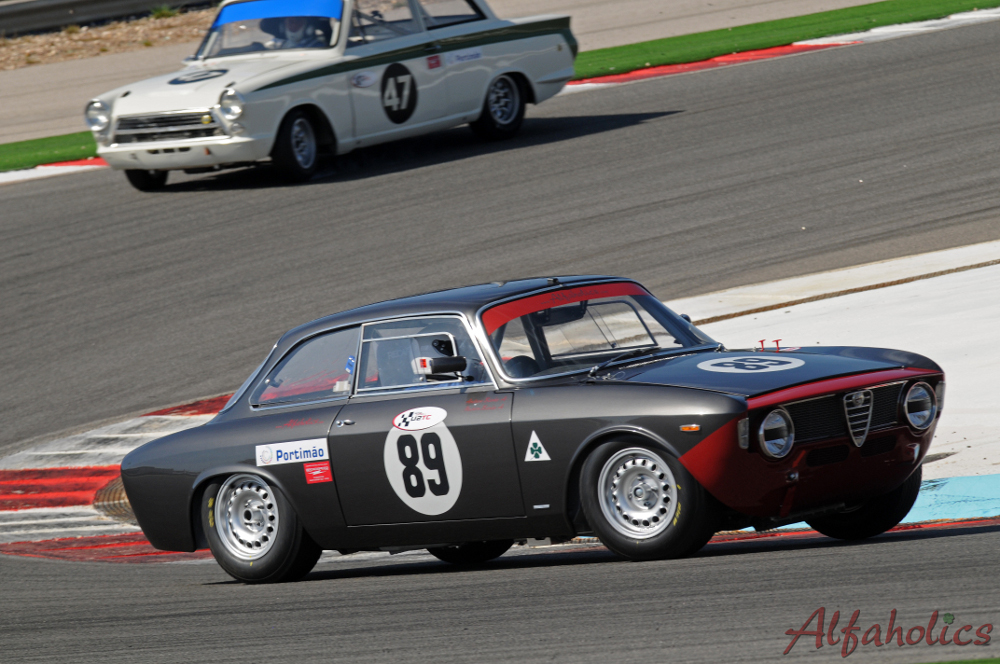 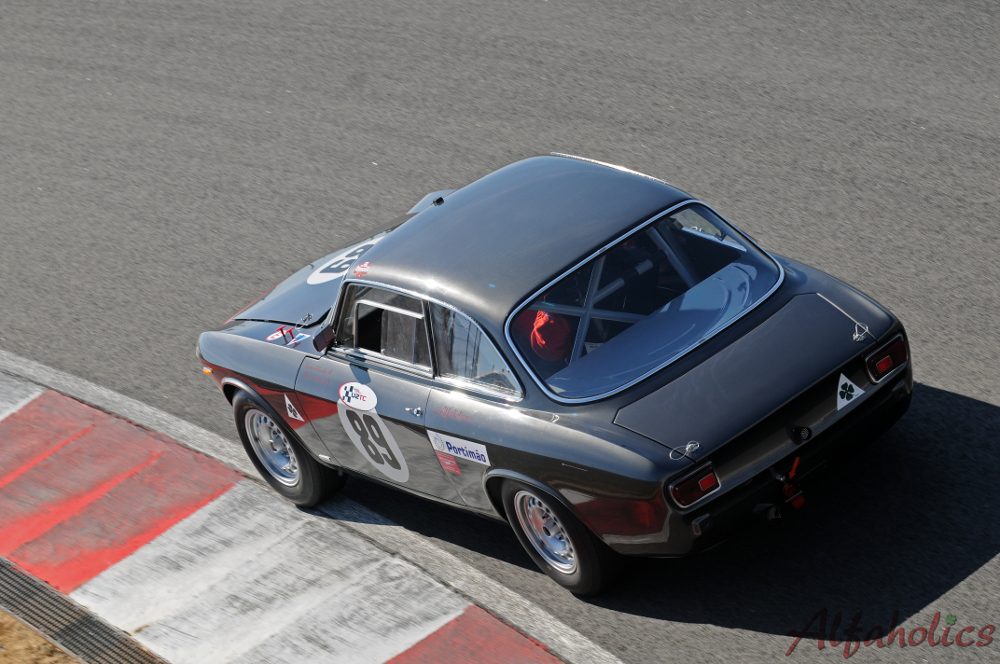 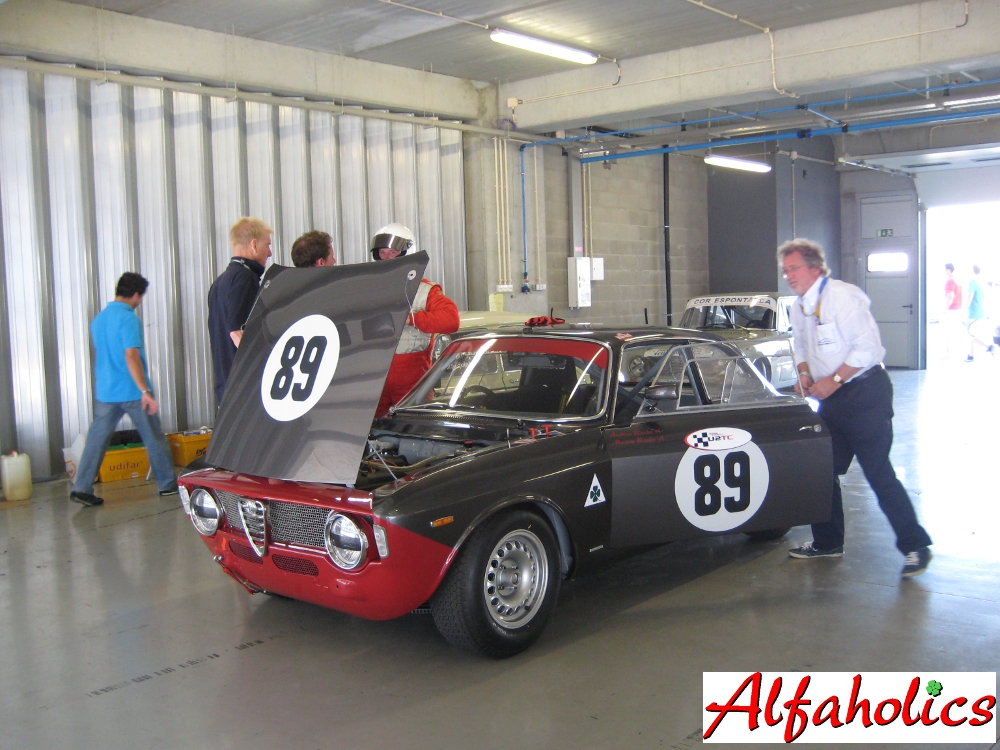 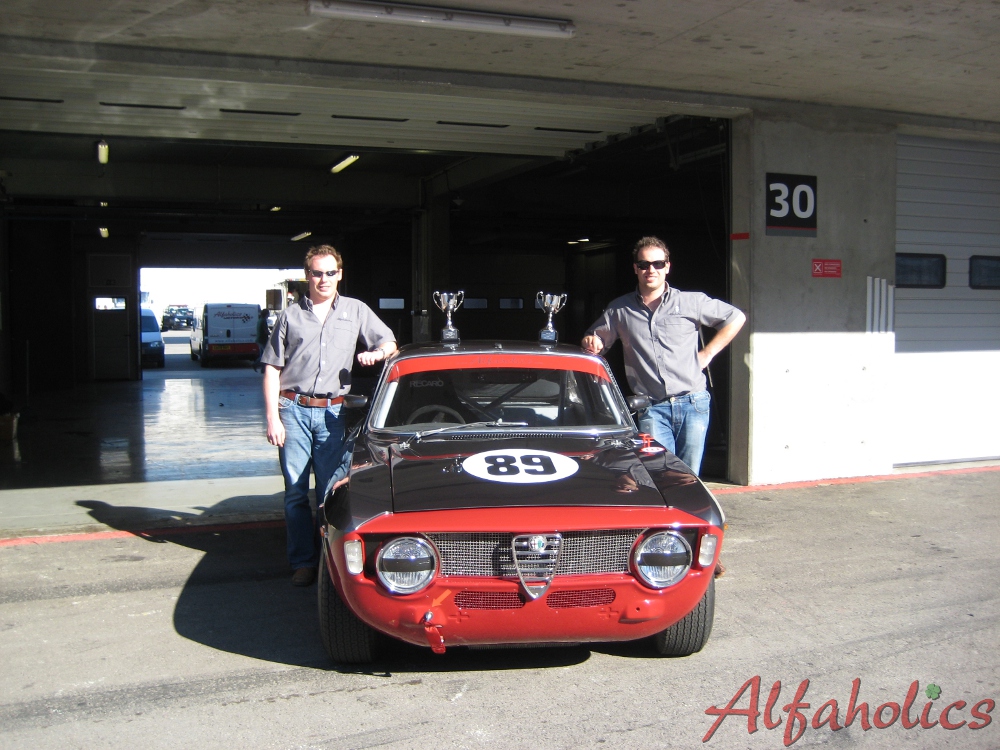 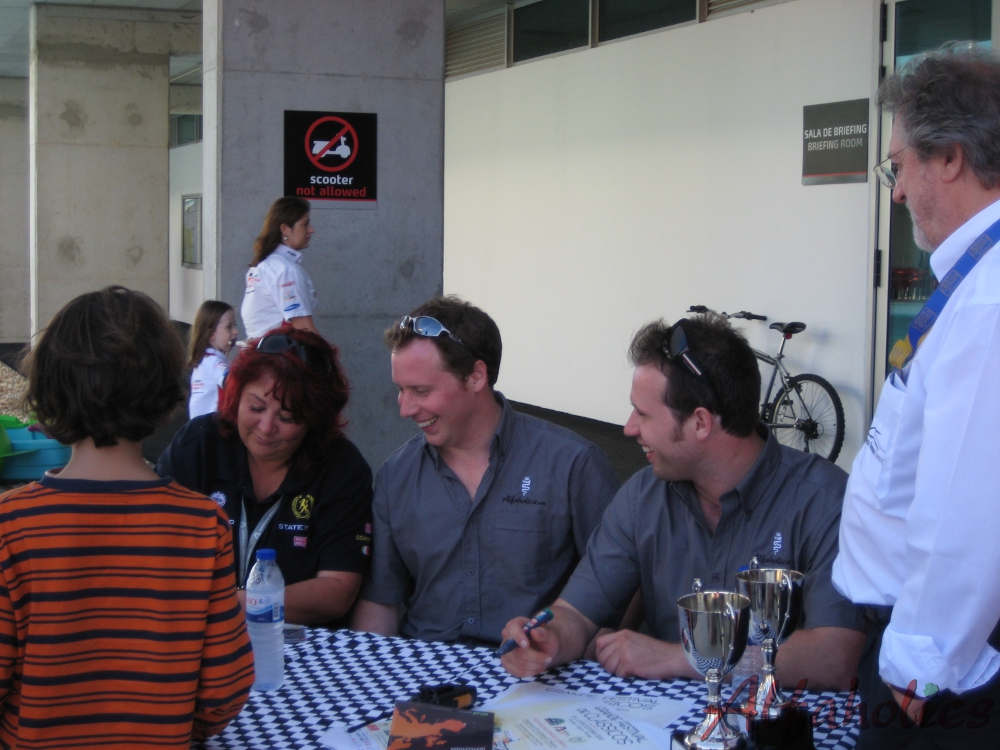 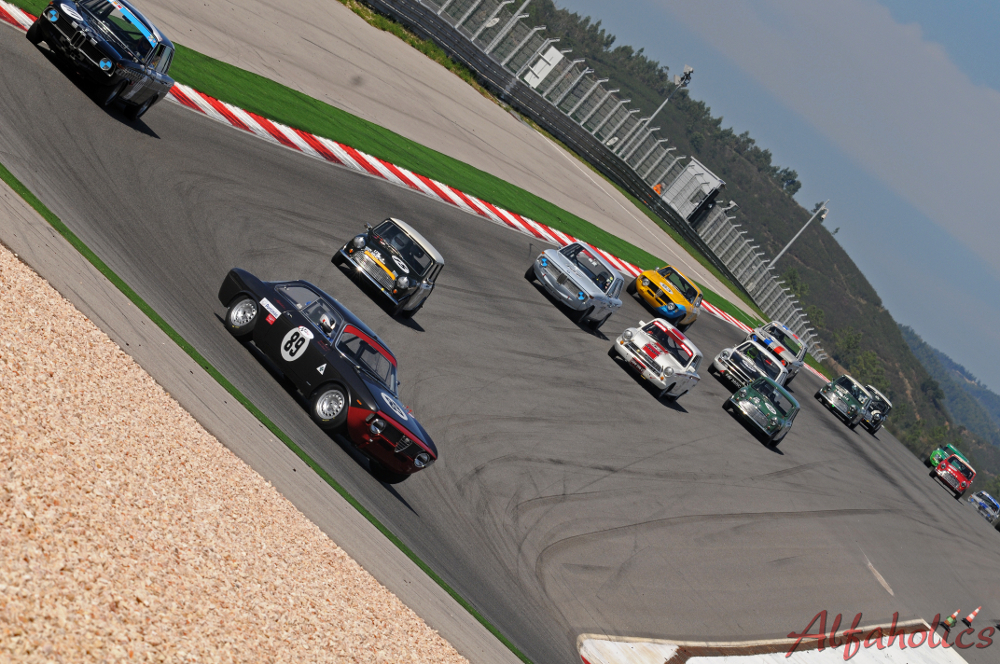