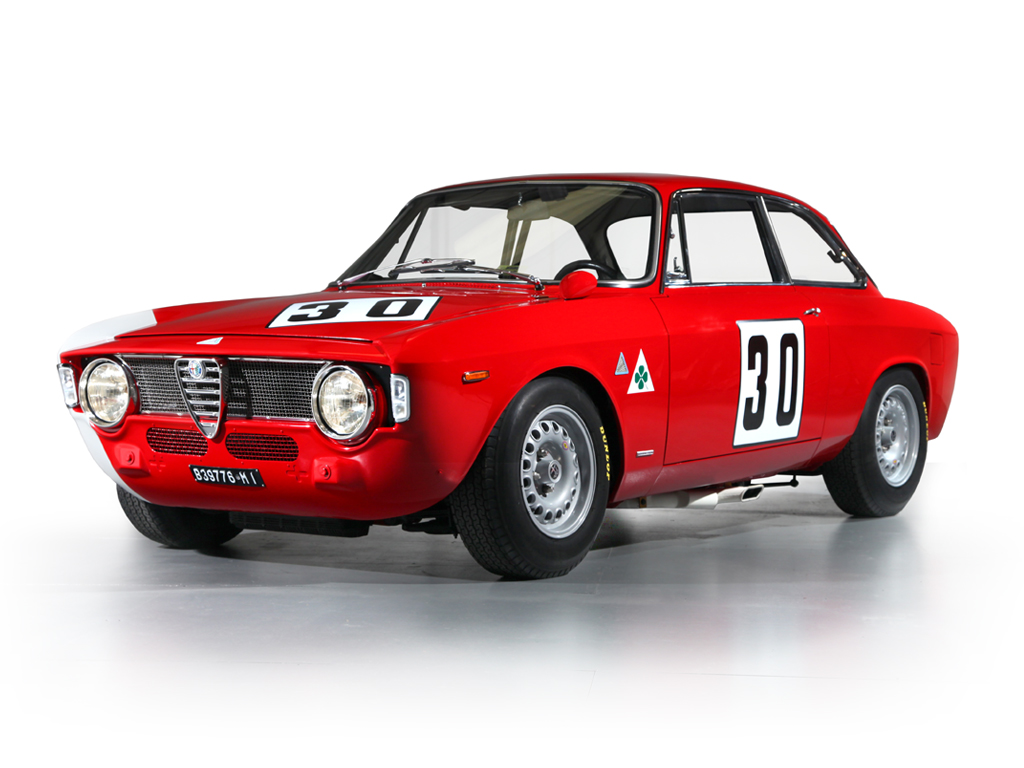 The restoration of this magnificent original Autodelta GTA Corsa, AR 613102 (reg B 39776 MI) is completed and the car has been returned to its exact 1966 Autodelta specification in ever detail down to the last nut & bolt.

Great care has been taken to not over restore the car; its original never re-trimmed seats, floor mats and steering wheel showing age & patina have been refitted rather than re-trimming components to make everything look ‘perfect’.

We even managed to find a genuine 1966 manufactured Dunlop Racing tyre to fit on the spare wheel in the boot, and new old stock DS11 racing brake pads, just like it used in 1966.

Once assembled, we followed the original Autodelta ‘Prova sheet’ specifications for suspension geometry, brake and engine settings, to ensure that the car drives exactly as it did in 1966 when Jochen Rindt and his team mates drove this car to its victories in the ETCC season.

MI B39776 arrives at Alfaholics with all its paperwork and parts. Remarkably, the car was never separated from its original parts, even though a modern fuel tank, seats and other parts were installed over the years to update its specification. It also retains its original hand-written Autodelta Prova sheet which lists all the features of the car; from the oils used, to carburettor jets, plugs, suspension setup and gearing! This Prova sheet, dated November 1966, was compiled when the car was supplied to Ove Andersson for 1967.  It gives a wonderful snapshot of how Autodelta were setting up the cars at the end of their first season of racing. When compared to a March 1966 Prova sheet which we have on file from another car, the evolution of setup is very interesting!

The history of this car from 1966, along with all the accompanying original parts and the huge file of paperwork (including original race magazine event reports and the like), must make this perhaps the best documented 1966 Autodelta team car.  Many of the other Autodelta cars have doubts as to who drove them and when and what really remains of the car now – this one is just so correct and everything is there!

Externally, the car looks in reasonable condition, but on closer inspection it can be seen that it has had a hard racing life with a mangled section of boot floor and damage to the front chassis legs. Fortunately, since it had a contemporary race career lasting only 3-4 years, there is not a spot of rust anywhere on the chassis. From examining the type of rivets used and the direction of their fitment, it is clear that the aluminium floors and the roof have never been removed!

The car will be stripped down to a bare shell and fitted on our Celette chassis jig to assess and re-set the chassis alignment. The body will then be painstakingly restored with the utmost care to preserve its originality, returning it to the exact specification in which it would have run in 1966 with Autodelta. It will be built up using all its original components, restored sensitively to exactly how it was raced in 1966, without a single modern race part used. It will be a shrine to Autodelta/Carlo Chiti and all those wonderful drivers who competed in it, taking care to follow the Autodelta Prova setup sheet for its final running specification.

All the original parts that came with the car; 90 litre endurance tank, sliding block rear axle system, original AD stamped engine block, original carburettors, sunvisors and of course seat set including fibreglass drivers seat in original condition which all those famous bottoms have sat in!

Boot floor in bad shape from a combination of accident damage and sliding block use.

Aluminium floors have never been removed and are actually in suprisingly OK condition. Main damage to them is where the rear gearbox mounting is attached to the floor – tunnel also shows signs of more than 1 rubber drive doughnut exploding in the past…!

MI B39776 is one of the famous 1966 Autodelta team cars, which together won Autodelta their first European Touring Car Championship and Andrea de Adamich the drivers title!

This is one of the best documented ’66 team cars with superb history and a vast catalogue of good quality photographs showing clearly who drove it at each of the events.

It racked up a total of 3 victories; one for Vaccarella & Pinto combined at the car’s first event, and 2 dominant victories by the legend Jochen Rindt later in the year in Sweden and Austria.

Nino Vaccarella and Enrico Pinto prepare for the gruelling Trofeo Jolly Hotels Rally which started in Palermo Sicily & ended in Trieste in Northern Italy – this would be the first victory for MI B39776!

Enrico Pinto on his way to 3rd overall on the Mt Ventoux Hillclimb – hillclimbs were part of the ETCC in 1966 but were awarded 1/2 points only.

Roberto Bussinello at the wheel at the Nurburgring Nordschleife

Andrea de Adamich drove the car as No.27 in the Spa 24hr race

The car was shipped over to Snetterton the week straight after the Spa 24hr race and used as the testing car to save the other 2 cars for the race – its Spa night identification lights and roundal lights can all clearly still be seen fitted as well as the white tape on the right side of the bootlid. Doesn’t even look like it got a wash before being put on the transporter!

Nanni Galli in practice at Snetterton

Jochen Rindt wins outright at Karlskoga Sweden by some margin having dominated the entire weekend. Carlo Chiti sold the car in early 1967 to Ove Andersson, one might imagine that Ove was at this event and enquired about purchasing the winning car from Autodelta to use in Sweden for following year…? Interestingly Spa ID lights still can be seen on the rear wings!

Andrea de Adamich in Budapest, he leads the race until the penultimate lap and sets fastest lap but clips a kerb, breaking a wheel rim in the process – not a surprise looking at the photos below. In the first photo you can see how close he is running to the righthand kerb, in the second you can see all the white paint from this kerb on the right front tyre side wall!

Jochen Rindt once again dominates the weekend in the Preis von Tirol at Innsbruck, Austria!

Jochen Rindt once again drove MI B39776 at Aspern, Vienna in the last race of the 1966 season; MI B39776 had clearly become Jochen’s choice Autodelta GTA! Having qualified on the front row with his teammate Nanni Galli, Jochen battles lap after lap, trading the lead with Galli until Jochen finally breaks the gearlever off, forcing an early retirement! With Rindt’s F1 commitments becoming more serious in 1967, this would be the last time he would step behind the wheel of an Autodelta GTA.