So we’ve done it, the first Alfaholics Nurburgring Nordschleife trip with our customers! This event will become fixed in the annual Alfaholics social events calendar and looks set to become THE European get together for customers and 105 enthusiasts alike!

Well, what a trip! Not only did we have a riot on track, but the social side was also absolutely fantastic, everyone getting on fabulously and there was much banter, lubricated with generous helpings of Warsteiner! It was very encouraging to see a good proportion of ladies and children on the trip, proving that as much of a boys weekend that it might be, it was also very much a weekend the whole family can enjoy.

We all met at Dover ferry port where a fabulous group of cars was collecting – all Bertone GTs. A mix of step and non-step front, including a handful of GTA Replicas, a couple of Twin Sparks and two HSCC 70s Road Sports cars made a wonderful sight at 6am. We certainly got some surprised looks as we barked our way through the ferry port, gobbling induction roar reverberating off the surrounding walls – maybe a little too much interest as security pulled over a handful of our cars including the Alfaholics service van, loaded with emergency jerry cans of fuel. We were forced to empty the jerry cans, a nice free pit stop for those unfortunate enough to be pulled over!

Safely over the English Channel and into France, we enjoyed a completely hassle free run through France, Belgium (including amazingly the dreaded Brussels ring road!) and through Germany past Cologne, deep into the heart of the Eiffel mountains where the Nurburgring is situated. So smooth was our run, that we had made it to the circuit with 15 minutes of the Thursday session still remaining. A mad rush to the bun fight at the ticket office to buy a 6 lap card on a Visa (no time to stop for cash!) and scrambling back to the cars; a few of us got out on track for a sighting lap, a little taster for what the weekend had to offer and enough to fuel some anxious chat over dinner. 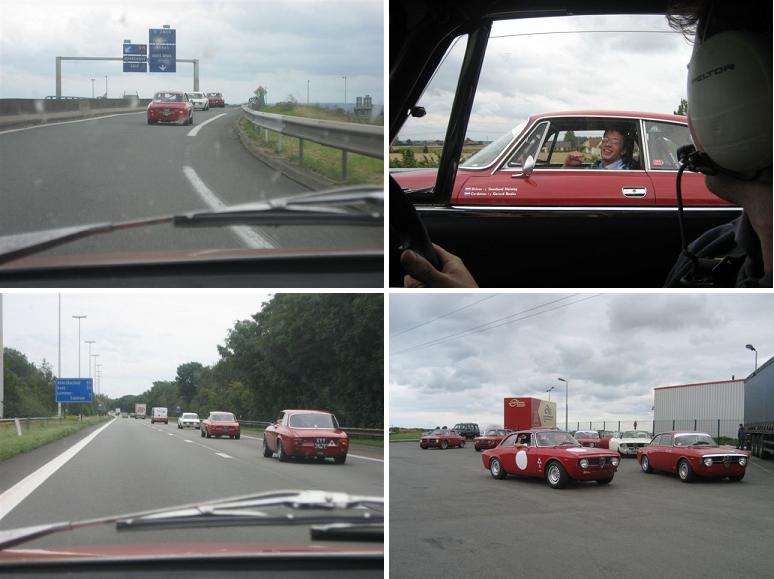 We were booked into the excellent Hotel am Tiergarten. Well known for its superb location, just 2 km from the circuit entrance and with clear views of the circuit, but, primarily as it is run by the Schmitz family, one of whom goes by the name of Sabine, queen of the Nordschleife and a BMW Ring Taxi pilot! Also, very conveniently, under the Hotel lies the equally famous Pistenklause restaurant, a shrine of signed photos and parts from damaged cars from years of Nurburgring racing. You really could spend hours studying all the artefacts on the walls, that is if weren’t for the incredible food, the specialty being prime Argentinean steak served on a hot stone for you to finish cooking to your perfection. Oh yes and the beer…! The circuit was not due to open until 5pm on Friday so there was no mad rush to get up too early with only a booking for the museum organised for late morning. We were joined on Thursday evening by some of our European customers, firstly Paul Grundy with his freshly 2-litred Sprint GTV and secondly Rodolphe Tonglet with his son Arnoud in their 2000 GTV. 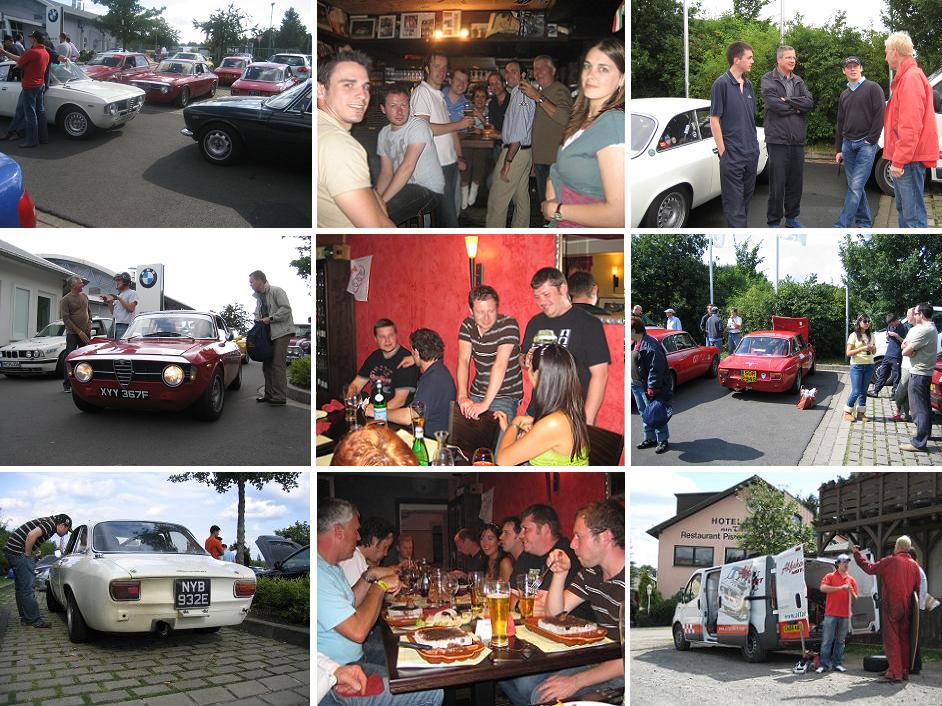 The museum was interesting, if a little random in its collection of cars but featured some great Ring trivia, its history and many of its victorious drivers. After lunch a few minor works were completed, a bit of brake bleeding for Ian Williams with his ex-Michael Beattie Northern Irish Hillclimb championship winning Sprint GT and most people adding some PSI to their tyres for the impending track work. The benefits of bringing our race van as a service vehicle were clear to see as many people were able to off load their excess gear and tools somewhere safe for the duration of the trip.

The weather was excellent on Friday so the evening session was superb fun, even if a little low on grip due to the race earlier that day.

The evening’s session saw the arrival of a few more of our European crew. Patrick Franken & Hannie from Holland with their wonderful 2.0 Giulia Ti that had been at our trackday at Castle Combe earlier this year, and Erwin Arentsen with his awesome 3.5 V6 75, having been unable to get his GT Junior ready in time. Back to the Pistenklause for dinner and a few beers before bed, as we had our date with professional photographer Jochen the following day so an early start was required by all.

Some of the Alfaholics group with their cars 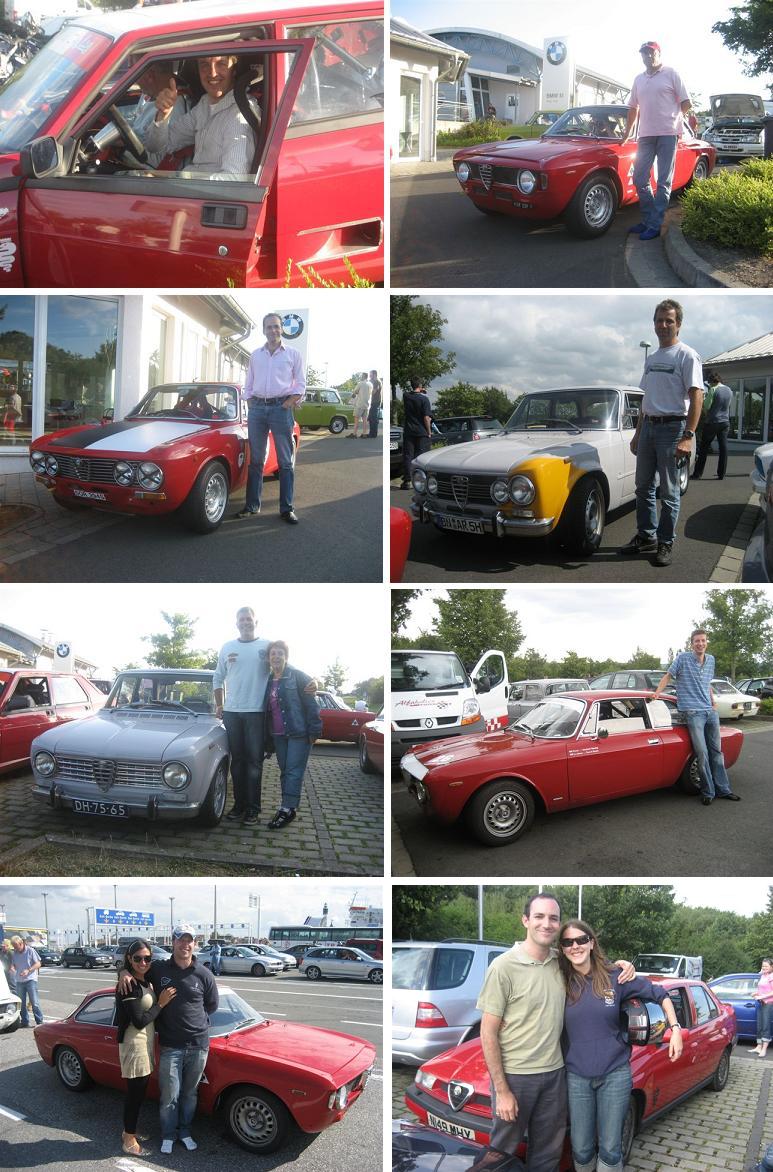 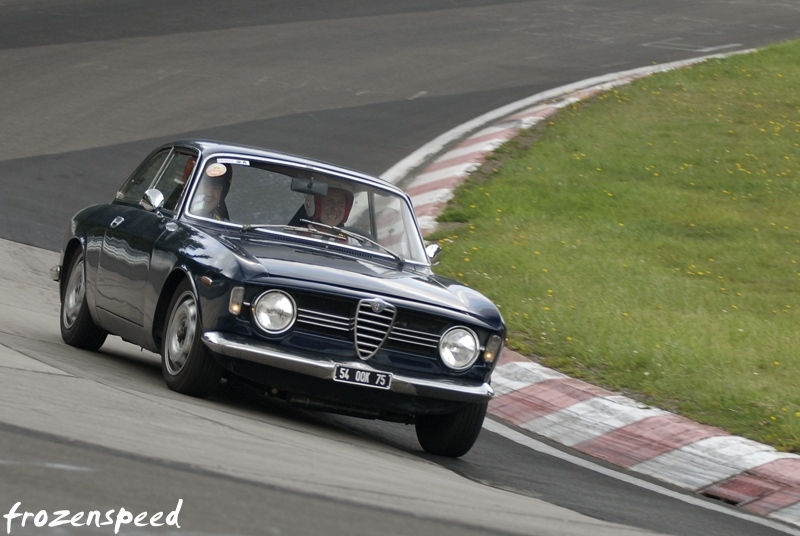 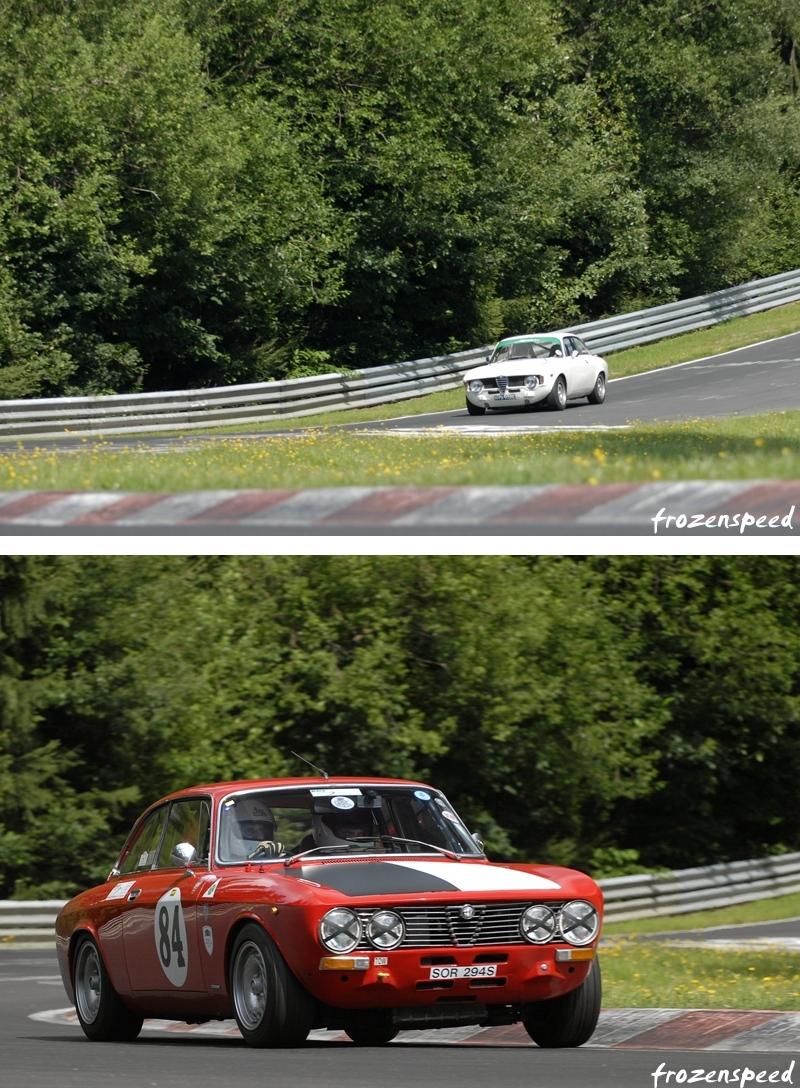 Saturday started early with the rain lashing against the windows of the Tiergarten hotel. Jochen teamed up with us in the paddock and took notes on which cars were in the group. He chucked me a walkie-talkie long distance radio to coordinate laps and jumped in his 156 and headed off to the first photography point. With Jochen ready with his digital SLR, we organised our cars into a complete group and headed out for a sighter lap in the wet, to obtain some nice convoy shots. Boy was it slippery as Paul Grundy fishtailed wildly through the first complex hanging on bravely as his 175 section tyres struggled to handle his new 2.0 engine and over zealous right foot! It must have been exciting inside the car, as it looked pretty spectacular in the rear view mirror! 10/10 for hanging on to that one! 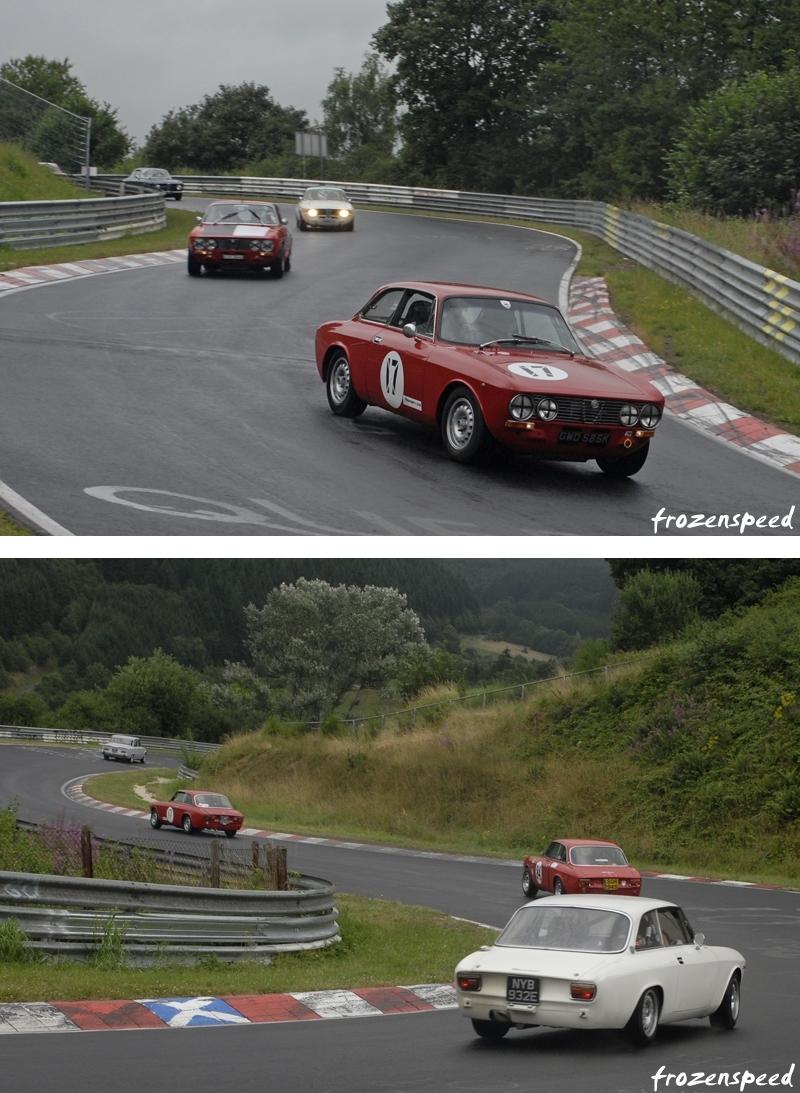 With the parade lap over there was a steady flow of 105s out on the track all day, building in frequency as the circuit dried out. By 2:30pm it was fully dry. This gave 5 hours of dry flat out track time, everyone’s confidence growing as they either learned or reacquainted themselves with the 73 corner monster that features an altitude variation of a massive 1000ft – the gradient is simply breathtaking!

Chris Clarke pushes on through Wehrseifen in the greasy morning conditions. Wehrseifen translates as ‘Defence valley’ as it originally marked the border between the towns of Adenau and Breidscheid 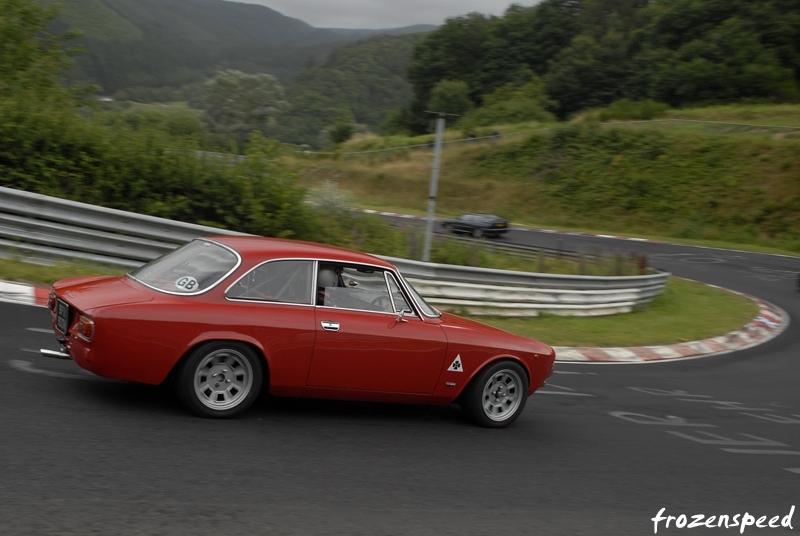 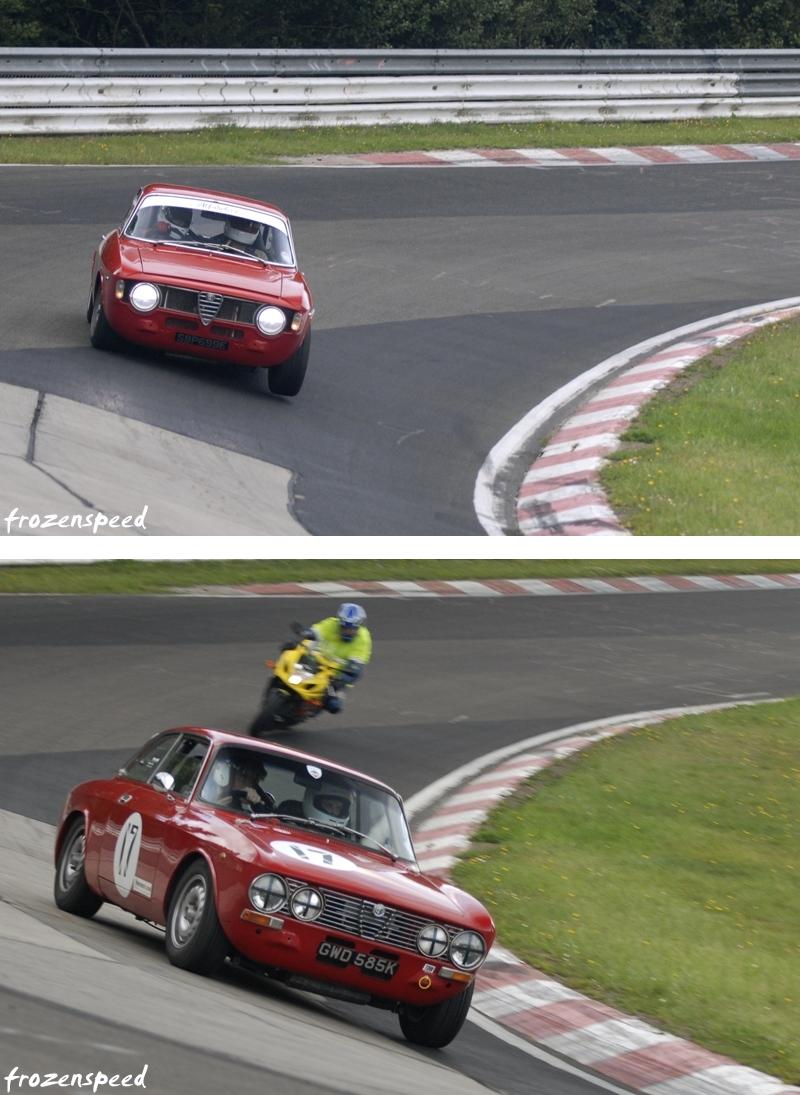 Erwin Arentsen drove flat out all weekend, seen here coming through the spectating bowl of Brunnchen and exiting Eiskurve 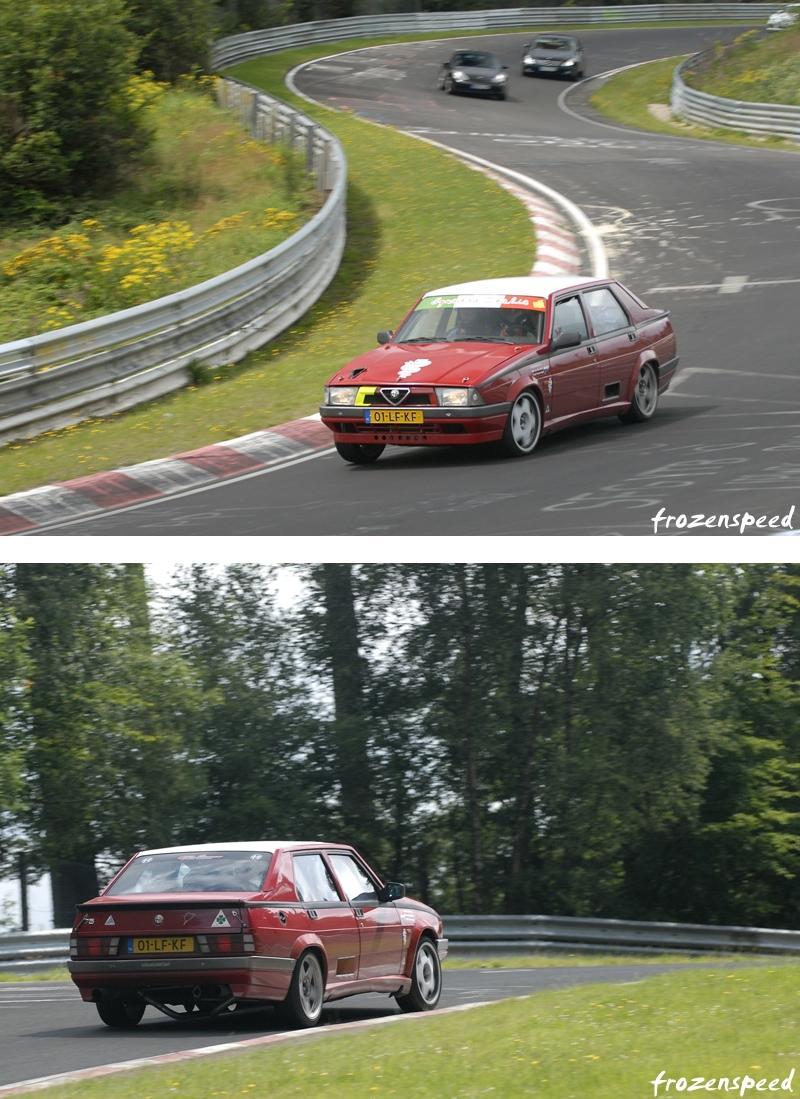 My Toyos, freshly fitted on the first set of our production 15″ GTA rims just one day before departure were not as good as I had hoped they would be. The circuit felt really grippy and mid corner grip was excellent. It was just so squirmy changing direction, later explained by the obviously soft sidewalls. So its back to Bridgestones after the trip then!

Several Alfaholics’ customers from northern Europe arrived on Saturday to meet the group, see all the cars and naturally chat 105s, including Thomas Mohr from Germany with his Grigio Giulia Super, Martin Faas with his red 2000 GTV & Martin Schrankel with his 2.0 GTJ and many more. Throughout the day we had over 20 105s at the track, a superb sight for all and much interest and admiration from the many other Ringers with their more standard modern machinery. The ladies in the group thoroughly enjoyed the day, as well as the whole weekend, soaking up the sun in the afternoon and getting out on track as well, to see what all the fuss and excitement was about!

Jochen worked his way round his favourite photography points, including the Karussel, Brunnchen, Eiskurve and the mini-Karussel amongst others. By 7:30 when the circuit shut we had all done a large number of laps and had most certainly worked up a big appetite for more steak and beer! 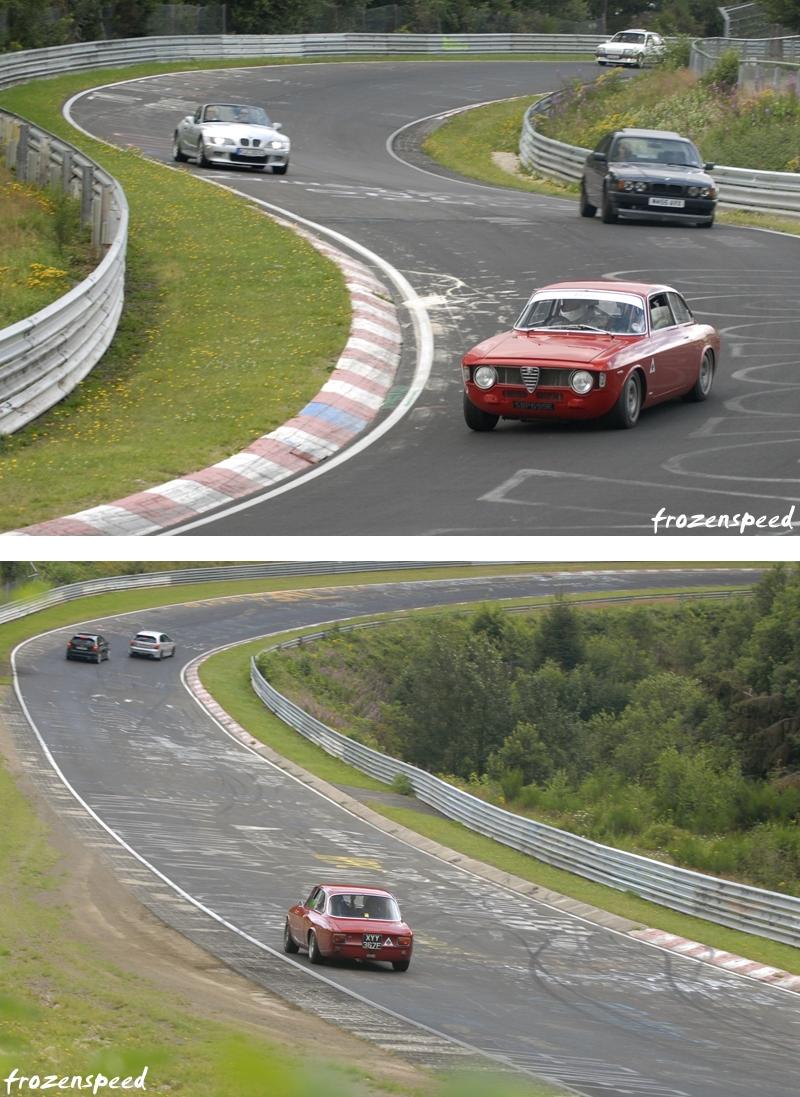 Ian Williams flying through Eiskurve, named this for its propensity to remain the last area on the circuit to dry out and first to ice up! 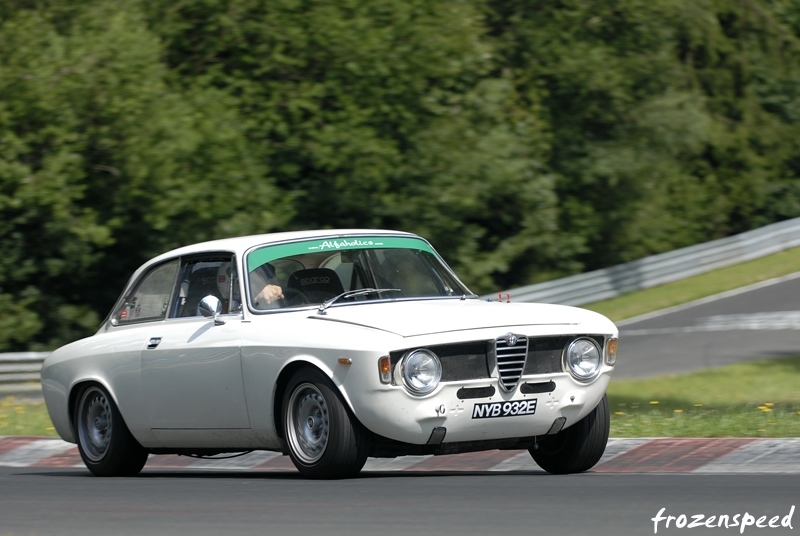 Breathtaking view on the way out of the famous (Caracciola)Karussell. It was Rudolf who was the first person to use the inside ditch, as it was then, to improve his corner speed! 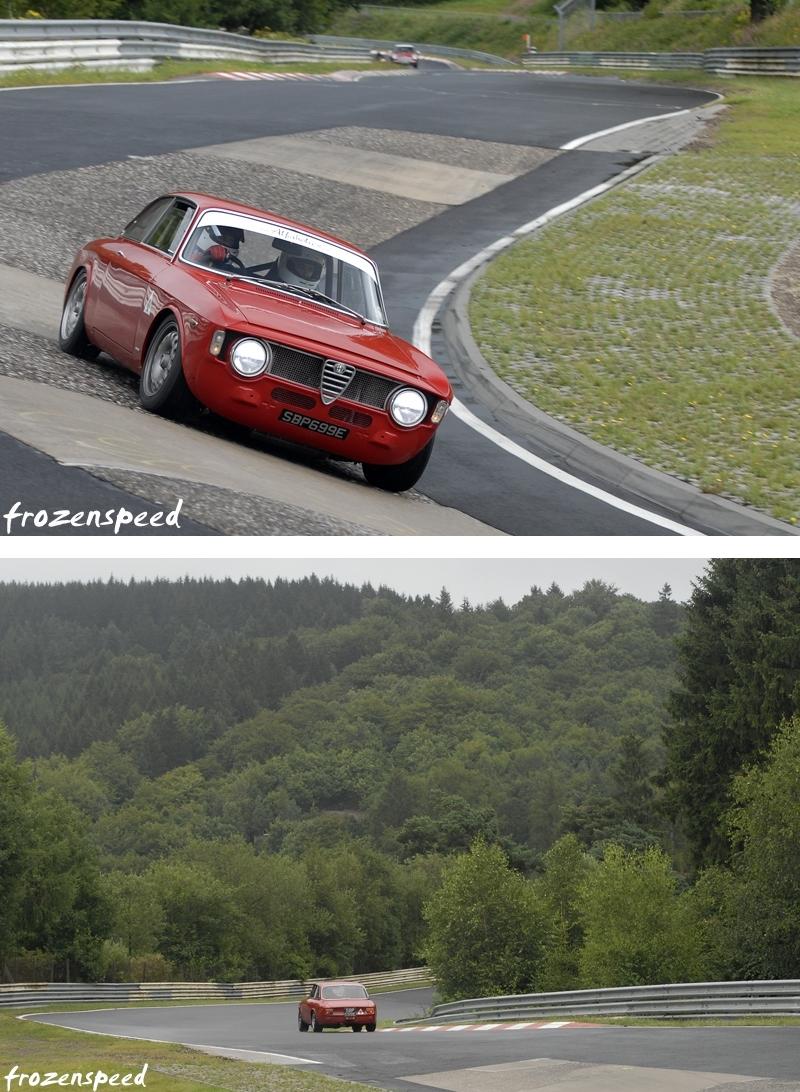 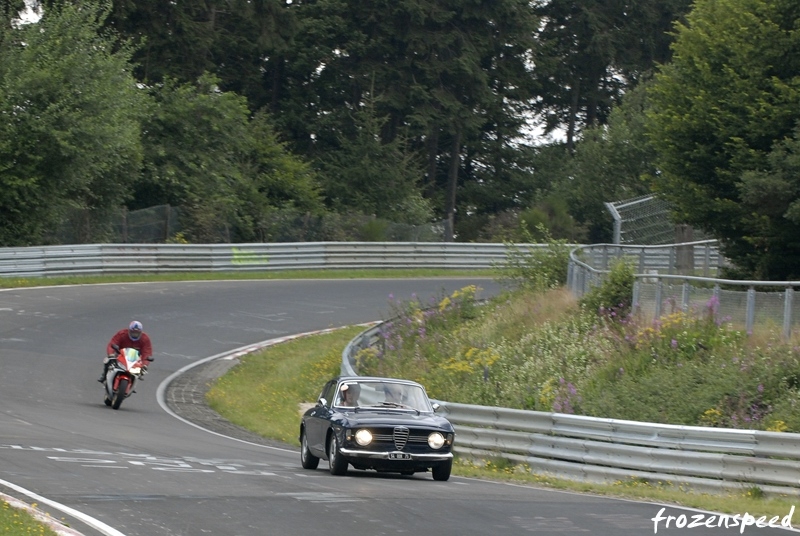 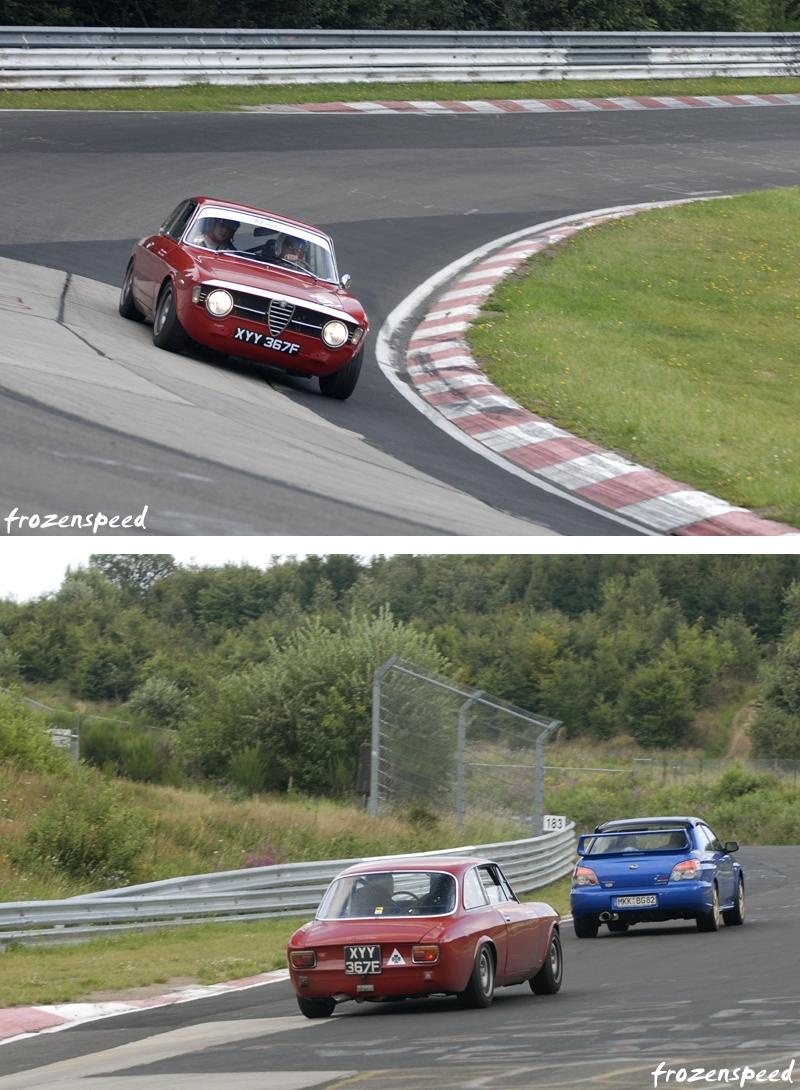 Max being chased hard through Schwalbenschwanz! 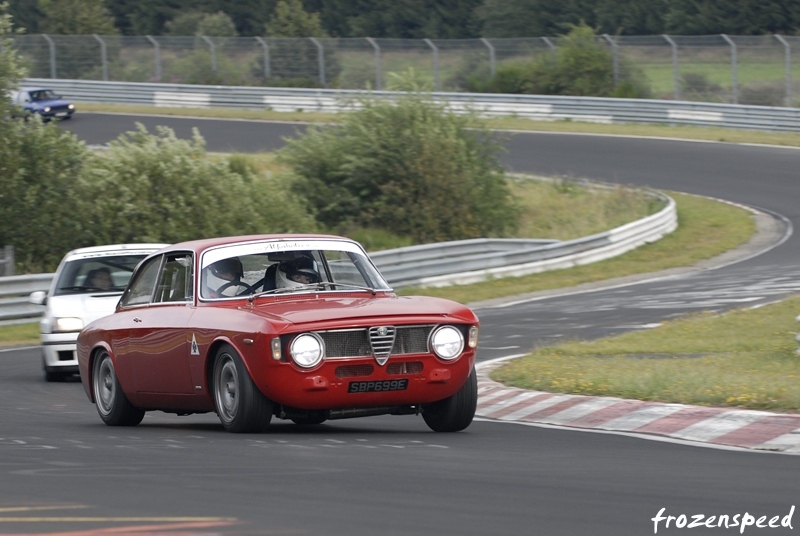 With the circuit not open until 11am on Sunday and with our needing to leave by 1pm, Saturday night was a bit of a closing party for the weekend and was set to be a lot of fun. Jochen came to see us in the restaurant with his laptop computer and worked his way round the group showing everyone his photos from the day. They looked superb and Jochen left to start editing his collection later that night. As the evening went on into the night, the banter really started to open up. It soon became apparent that Erwin was possibly one of the funniest men in the world. As the beer continued to flow, we all ended up rolling around in our chairs laughing hard. Poor Patrick laughed so hard he cried and couldn’t breathe! O.E.W! Eventually we managed to get to bed, and Sunday left just enough time to sort ourselves out before the impending journey home, away from Wonderland and back to reality! 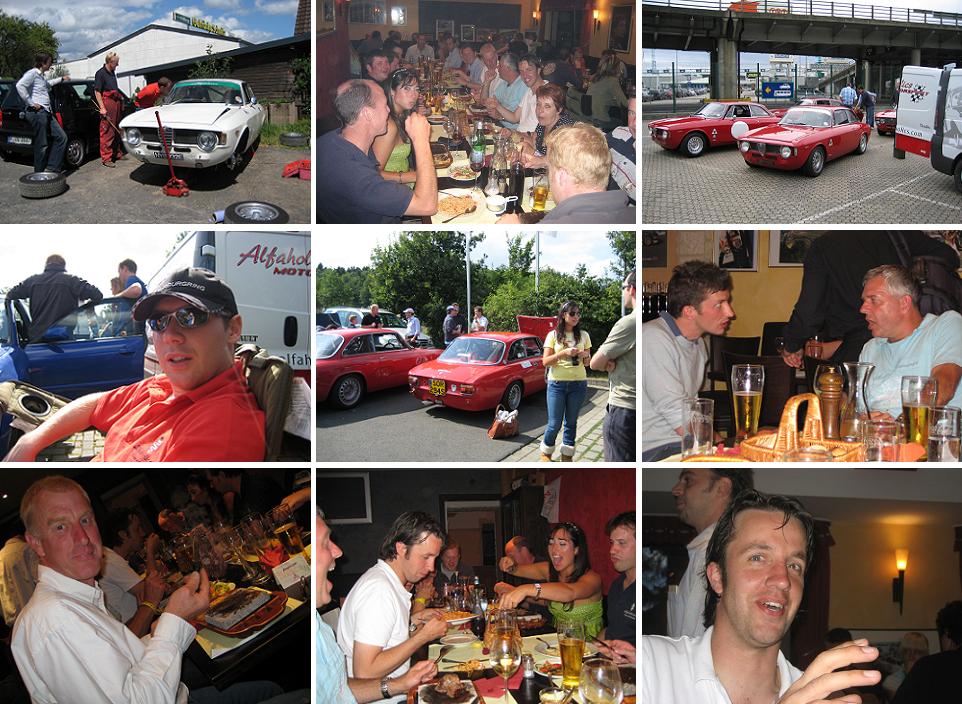 LAP OF THE NORDSCHLEIFE ON BOARD MAX’S GTA REPLICA

So for those of you who could not make it this year, I hope this has whet your appetite! Keep an eye out on the website at the beginning of next year when we will release the dates of our next trip!