The Alfaholics Trackday Weekend 2007 was once again hugely successful, drawing clients from around the world to both watch as well as take part. Bookings came in thick and fast for the weekend and we were fully booked 3 weeks beforehand.

Earlier in the year I received a call from Robert Petersson, editor of the Swedish magazine ‘Auto Motor & Sport’. Robert was keen to come over and get a flavour of the Alfaholics weekend and write articles about the company, as well as road and track test our cars; specifically Max’s GTA Replica and anything else he could get his hands on! Robert came over on Thursday and brought with him Bo Johansson, a considerable GTA expert, both keen to visit Alfaholics and see the race products, as well as the cars and discuss the build project of Robert’s GTAm.

On Friday they came to Alfaholics for a full day of Alfas; hours of discussing race car build and setup, plenty of driving in the stunning scenery of Exmoor and lots of photography work for the magazine.

At the end of the day we travelled back to Bristol to stay once again, as last year, at the excellent Novotel and meet up with the rest of the international contingent. Patrick Franken drove his beautiful Grigio Indaco 2.0 Giulia Ti from Holland with his partner Hannie. Hans ten Hagen had signed up but unfortunately was unable to ready his step-front in time. Nevertheless, he still took the opportunity of coming over from Holland, with fellow step-front GT owner Freek Veldhuizen, to enjoy the weekend. He took the opportunity of filling his estate car with performance parts and later got to experience all these parts in action on the circuit, as passenger in our GTA Replica! William le Bourgeois brought his ex-Dutch Trofeo Sprint GT race car from Jersey. The Scottish contingent of Richard Merrell with his ultra rapid GTA Replica and John Bruce with his S4 Spider who make the pilgrimage annually were also staying in the hotel, as was Arnoud van Leeuwen who had collected from Alfaholics that very day, his step-front GT Junior with new Alfaholics 198bhp Twin Spark engine! Malcolm Whitehouse drove his exquisite 2000 GTV all the way from Switzerland for the weekend, a great effort! Dinner at the local Italian restaurant on Friday night was superb and a very lively event to boot! It really is wonderful getting such a group together socially, all with the overriding ‘105 addiction’!

Saturday 7:15am, the international convoy groups outside the Novotel prior to heading up to Combe. Arnoud van Leeuwen’s freshly completed Alfaholics Twin Sparked GT Junior lines up behind Max’s GTA Replica 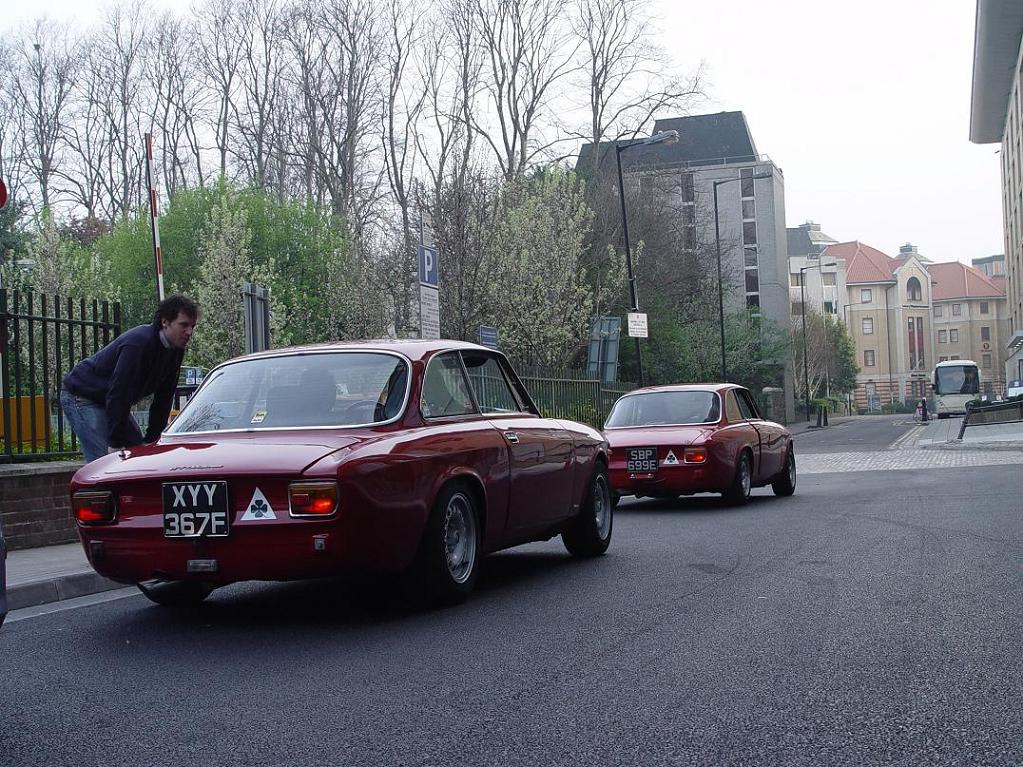 Saturday morning broke early with the sun quickly piercing the sky. It looked like once again we would be blessed with great weather. As it turned out, it was destined to be the hottest day of the year in the UK! The paddock was soon awash with barking 105’s all raring to get on track. With 55 cars signed in and 75 drivers, the strength and popularity of this day as the 105 enthusiasts day out was only too obvious. It was great to see so many people crawling round each other’s cars and jumping on board for some laps. Everyone was keen to see what spec people were running in their 105s; everyone so enthusiastic – the atmosphere all day was electric! 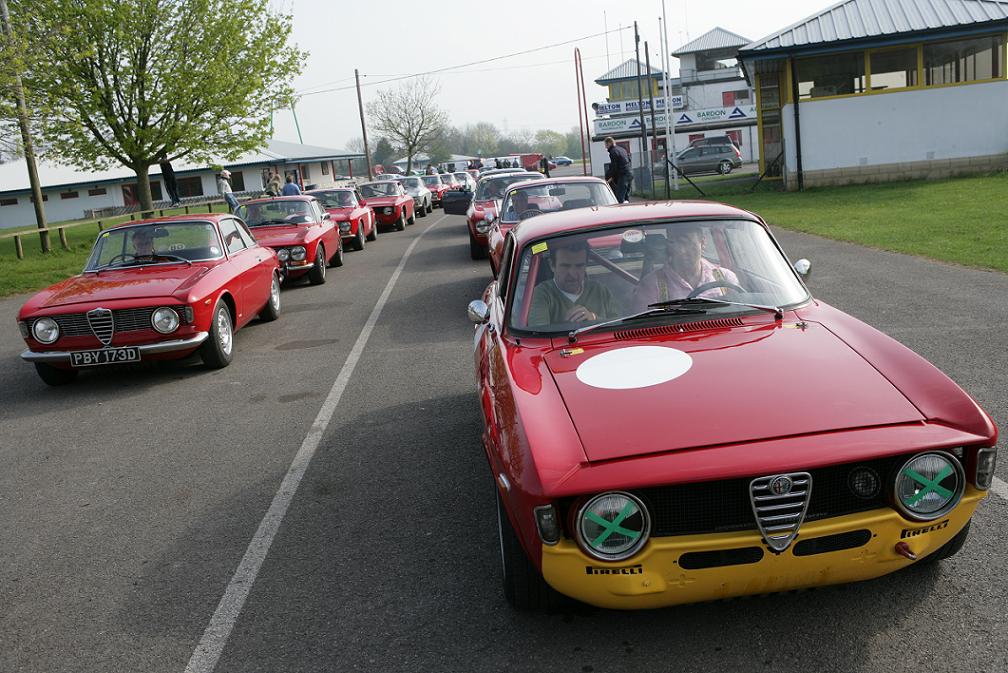 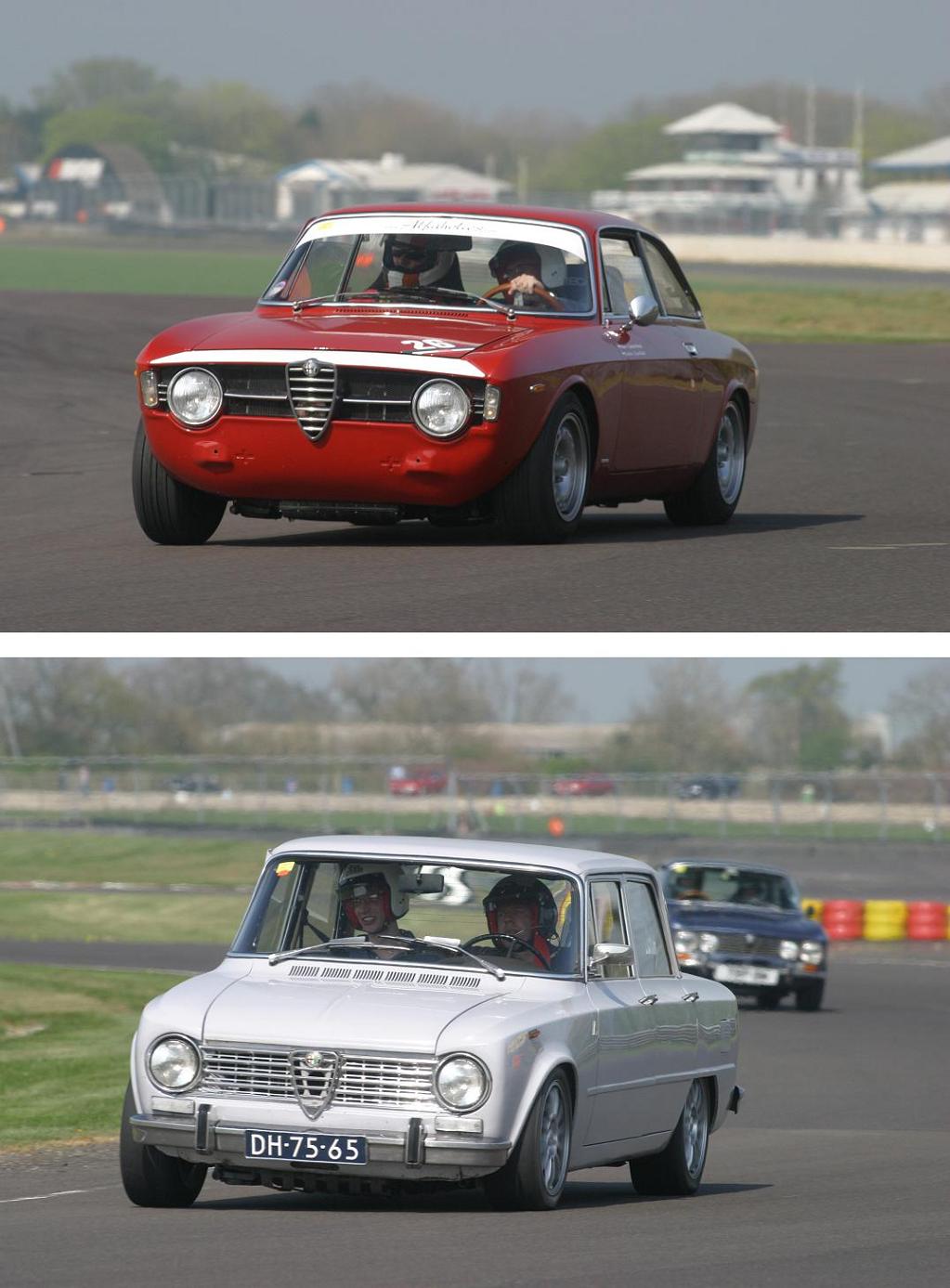 Again there was a superb range of 105’s, a great mix of standard road cars, a wide variety of fast road & trackday cars, both early and late GT models, and a handful of full race cars, including our freshly rebuilt and re-liveried 2.0 Sprint GT racer fitted with a fresh, snarling full race Twin Spark motor and the 2 litre HSCC Road Sports cars of John Dobson, Dave Erwin & James Nairn. 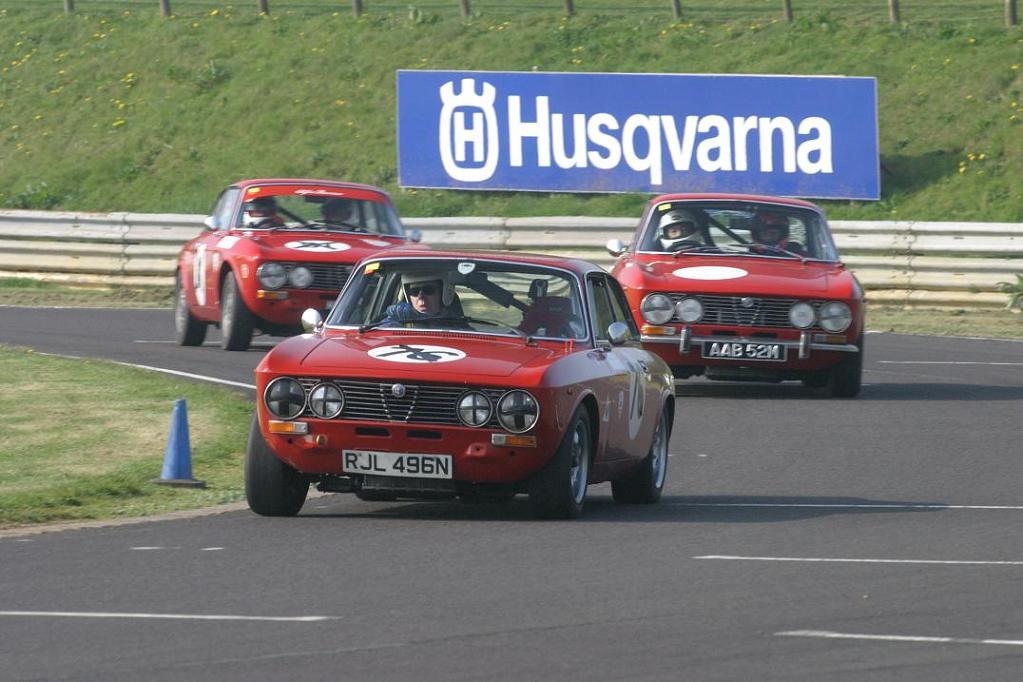 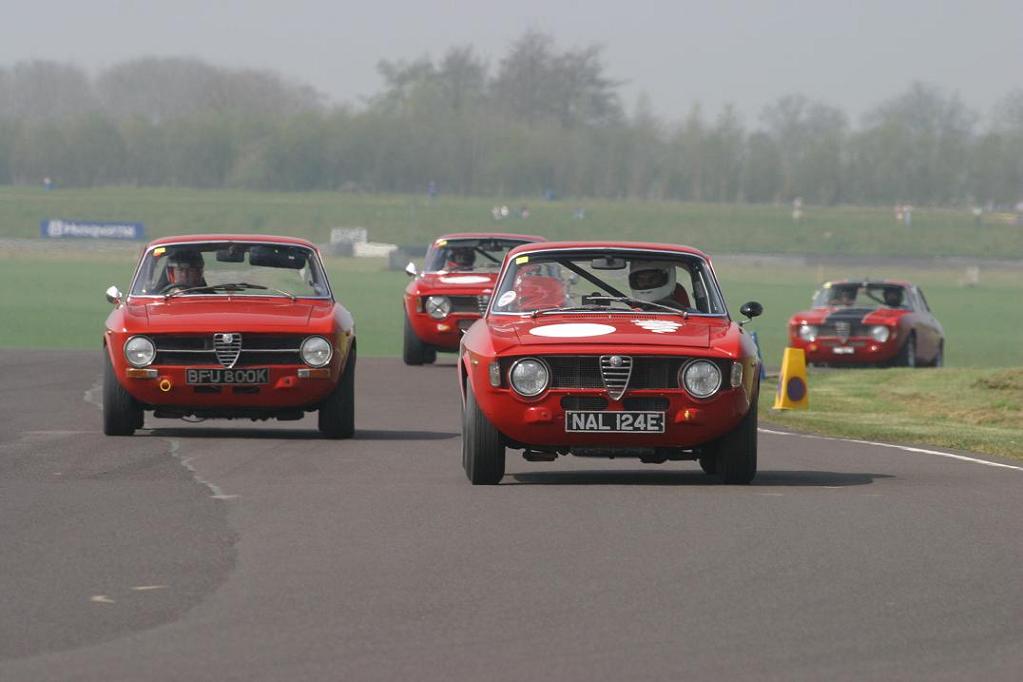 The day ran smoothly and efficiently with a huge amount of tracktime. There were never more than 12 cars in the queue so no one had to wait more than 12 minutes before getting on track. It was superb to see so many regulars, as well as an encouraging number of clients new to trackdays ‘dipping their toe in the water’, all thoroughly enjoying themselves and doubtlessly returning for more action next year! The paddock was also full of enthusiasts in a wide variety of classic and modern Alfas, who had come along to spectate, soak up the atmosphere and enjoy the lunchtime parade laps.

Classic Cars Magazine were present, writing and shooting a 5 page article on Max’s Alfaholics GTA Replica, the lunchtime parade gave them the perfect opportunity to do some chase photography with a group of 105’s as well as some slow tripod panning photography Lower photo courtesy of www.lyndonmcneill.com 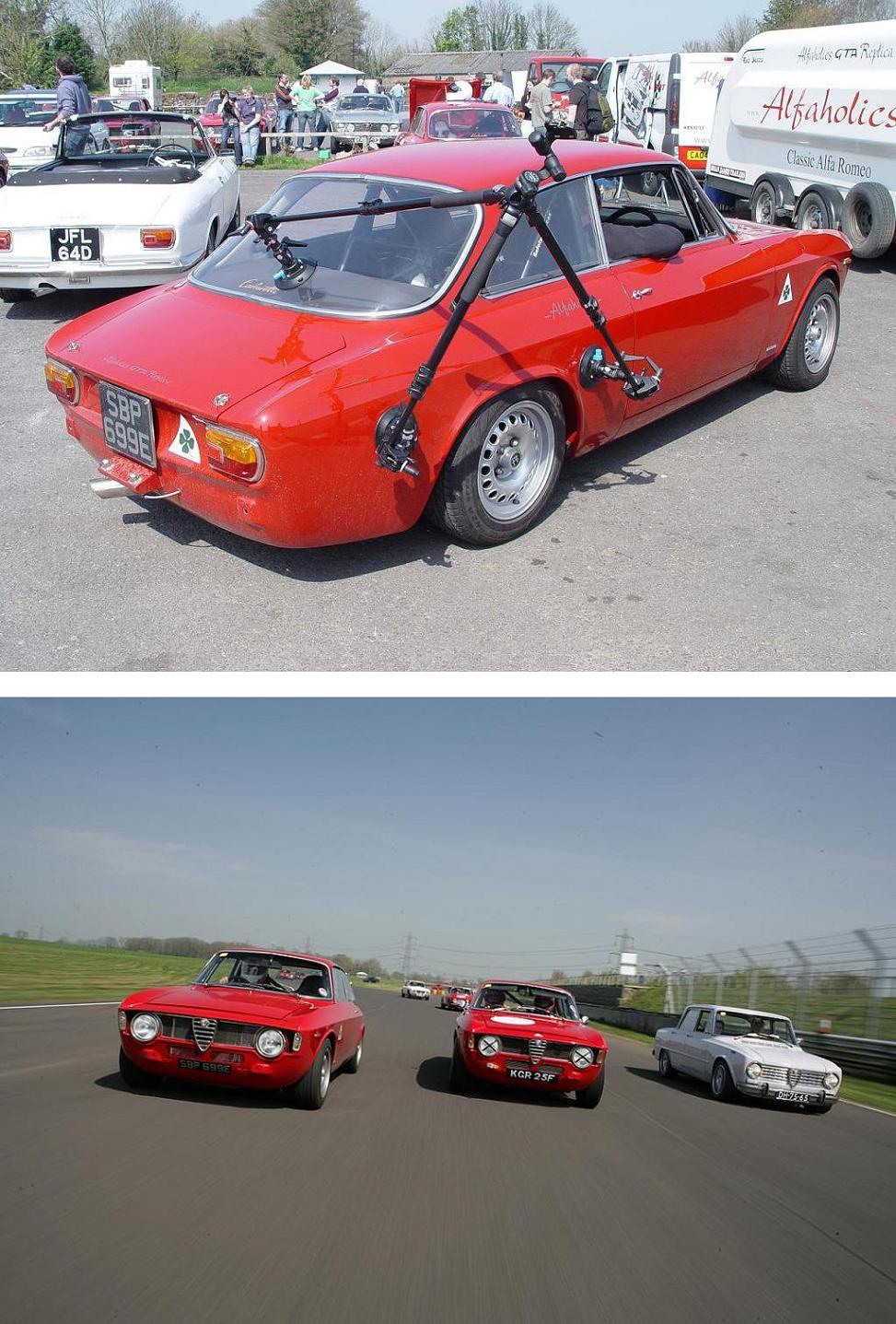 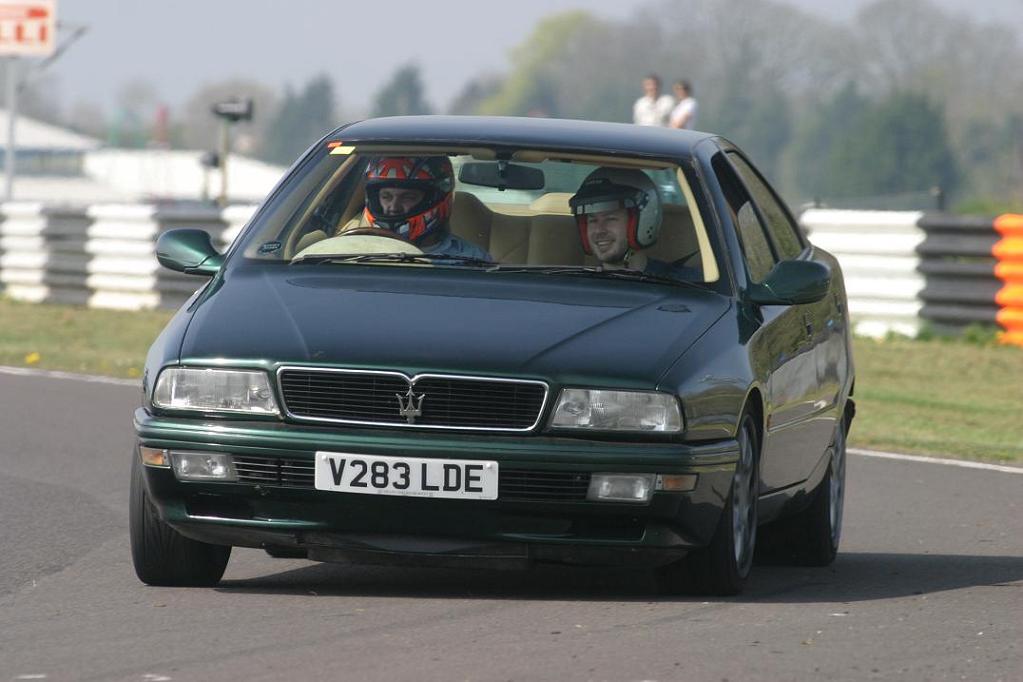 It was good to meet New Zealander Bob Deeming who was keen to come and meet us after years of conducting business over the phone! We discussed full race suspension packages and engines for his Sprint GT race project as well as various upgrades for his 1300 GTA widebody. Having a passenger seat specially fitted in our race car gave him the opportunity of experiencing all the parts in action as a package; an exhilarating passenger ride! American client Sergio Olivares was in the UK that week so made the effort to come down and see how 105s are enjoyed UK style!

Swede Bo Johansson inspects the Alfaholics Giulia GTC in the foreground, whilst New Zealander Bob Deeming discusses 105 race car setup with Richard Banks behind. Bob then straps in the passenger seat of the Alfaholics Racer for some hot laps with Max Banks 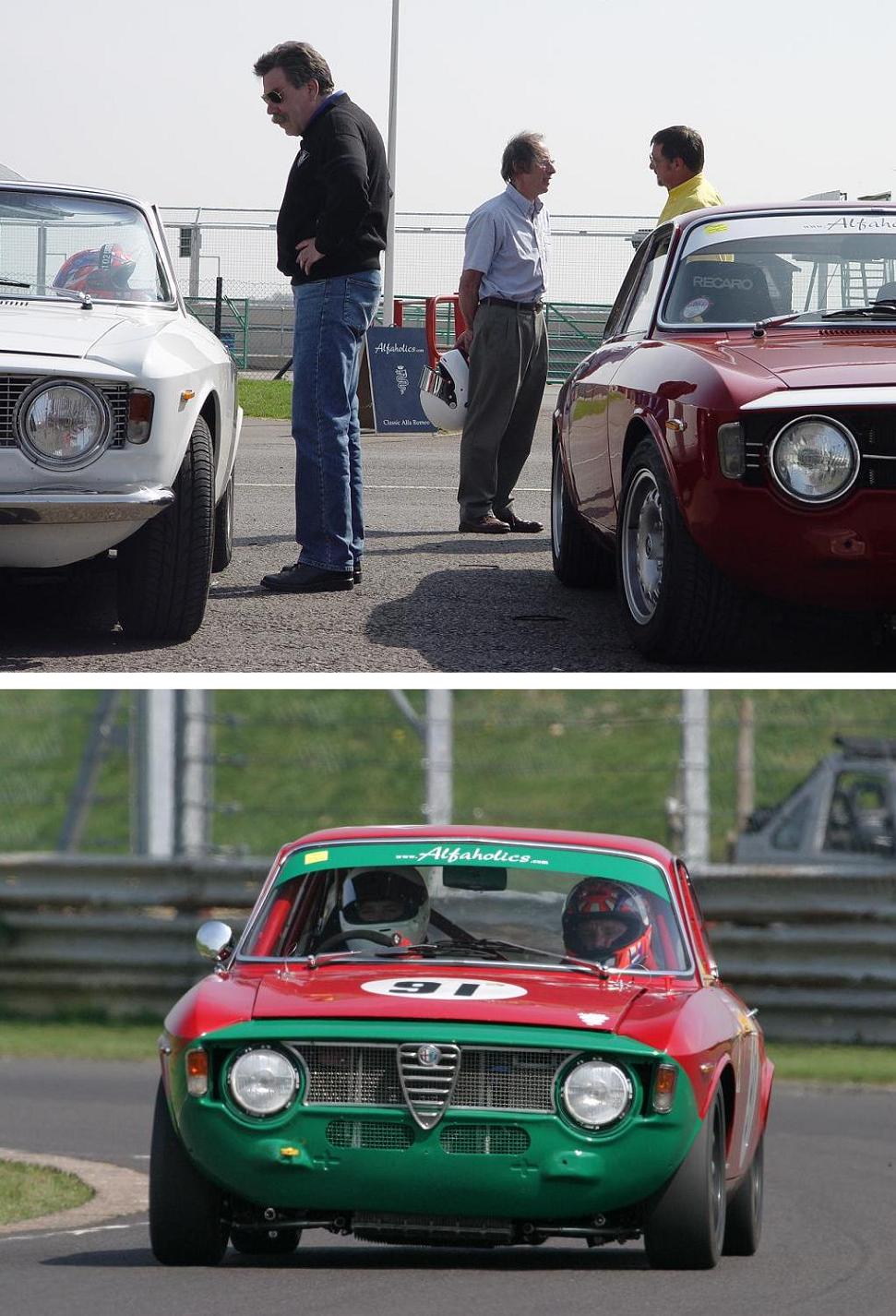 Alas the day flashed by in an instant as usual and at 5pm the circuit closed. Our international contingent and regulars headed for ‘après-track’ at the superb Salutation Inn close to the circuit. Excellent food and beer! Then we all headed back to Bristol and the hotel for a quick pit-stop to freshen up before heading out to a private members bar in Clifton. Needless to say, there were plenty of enthusiastic tales of memorable track experiences from the day as well as much appreciation for the whole long weekend holiday, everyone had thoroughly enjoyed themselves! A great weekend for 105 enthusiasts from all over the world! 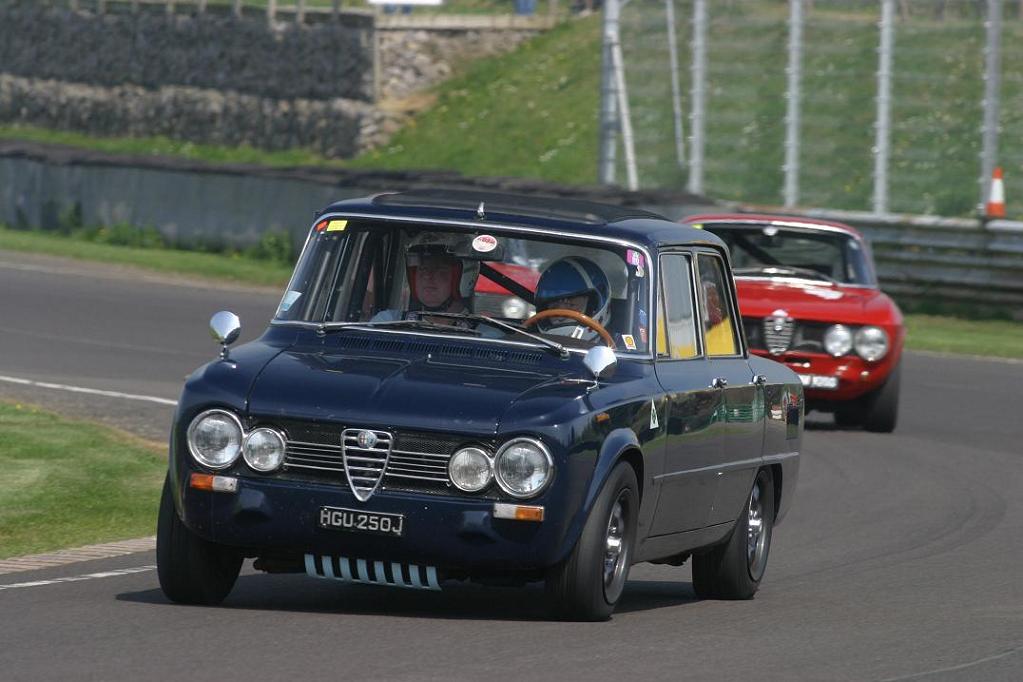 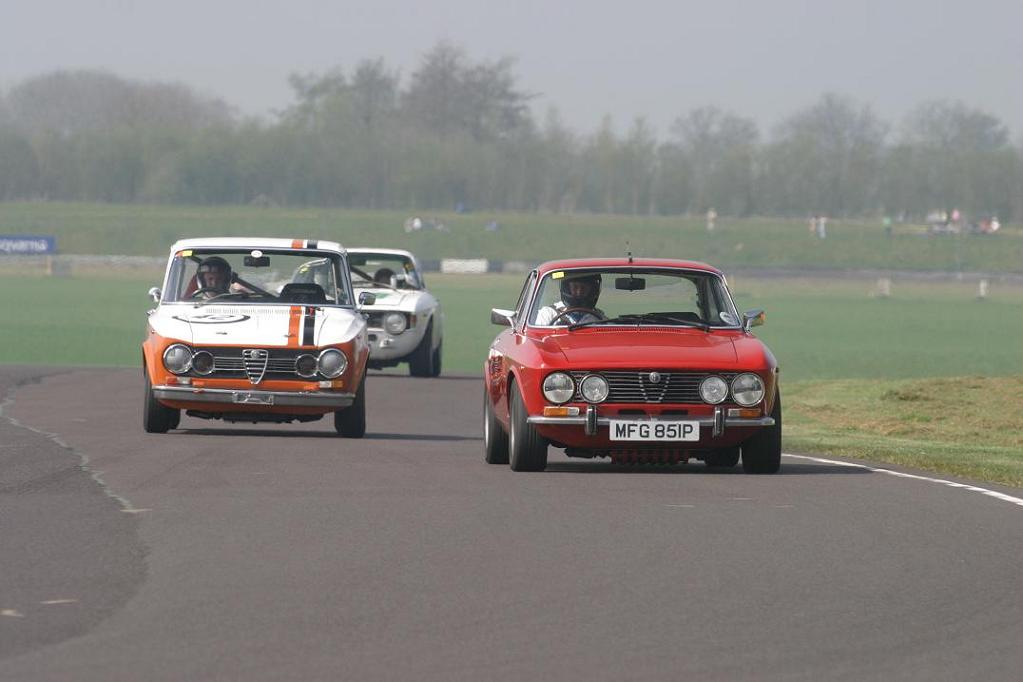 Malcolm Whitehouse’s Swiss 2000 GTV is followed closely by Patrick Franken’s Dutch 2.0 Giulia Ti into Quarry Corner, the international turn out for the day was superb! 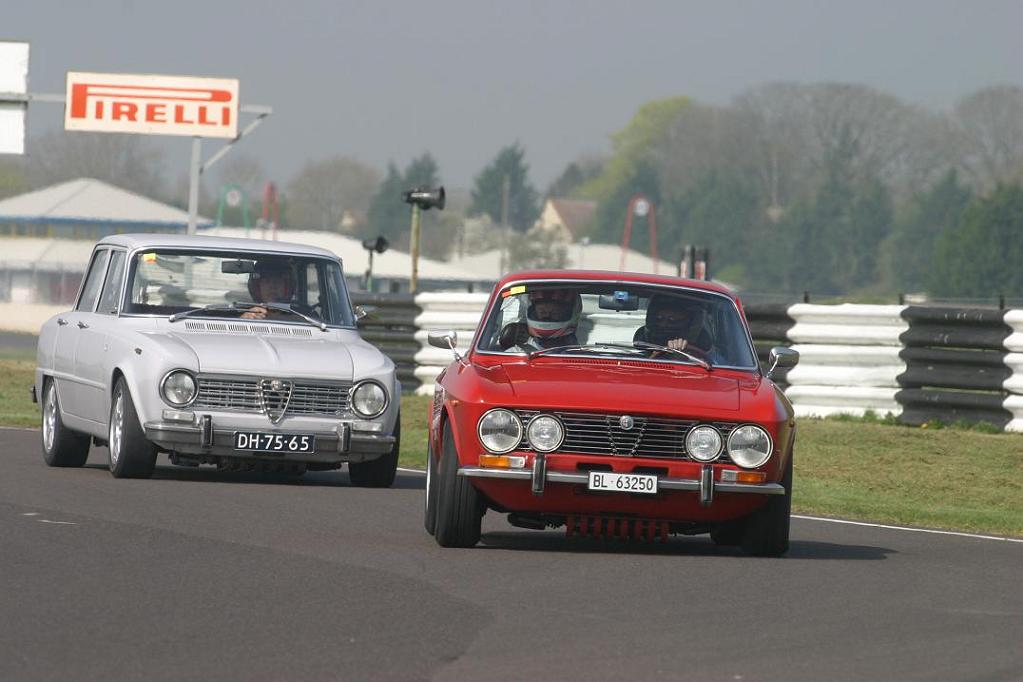 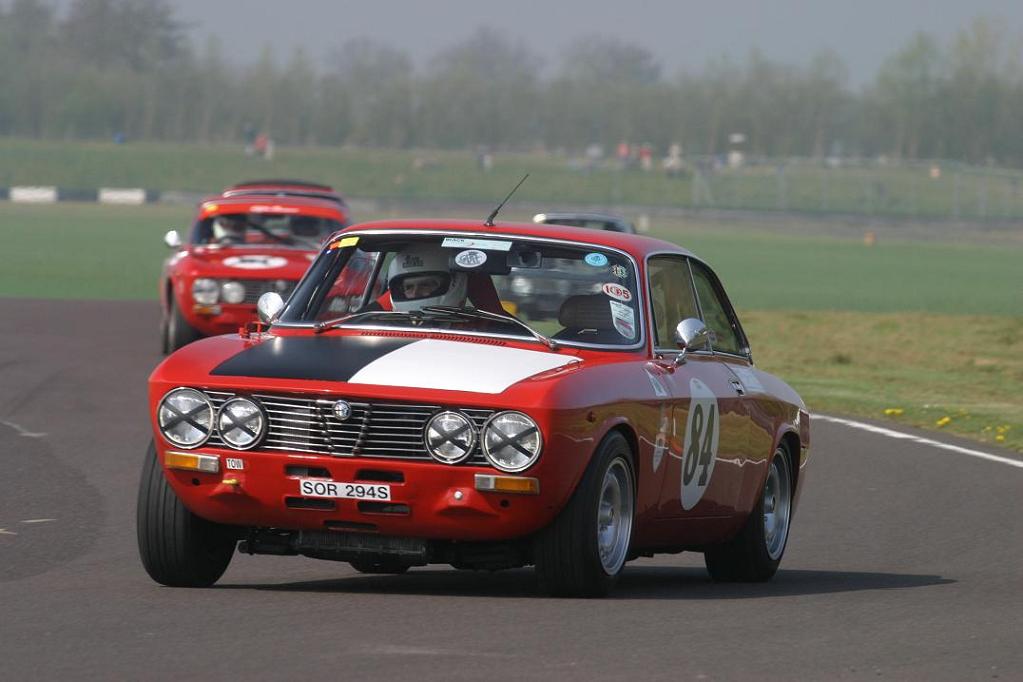 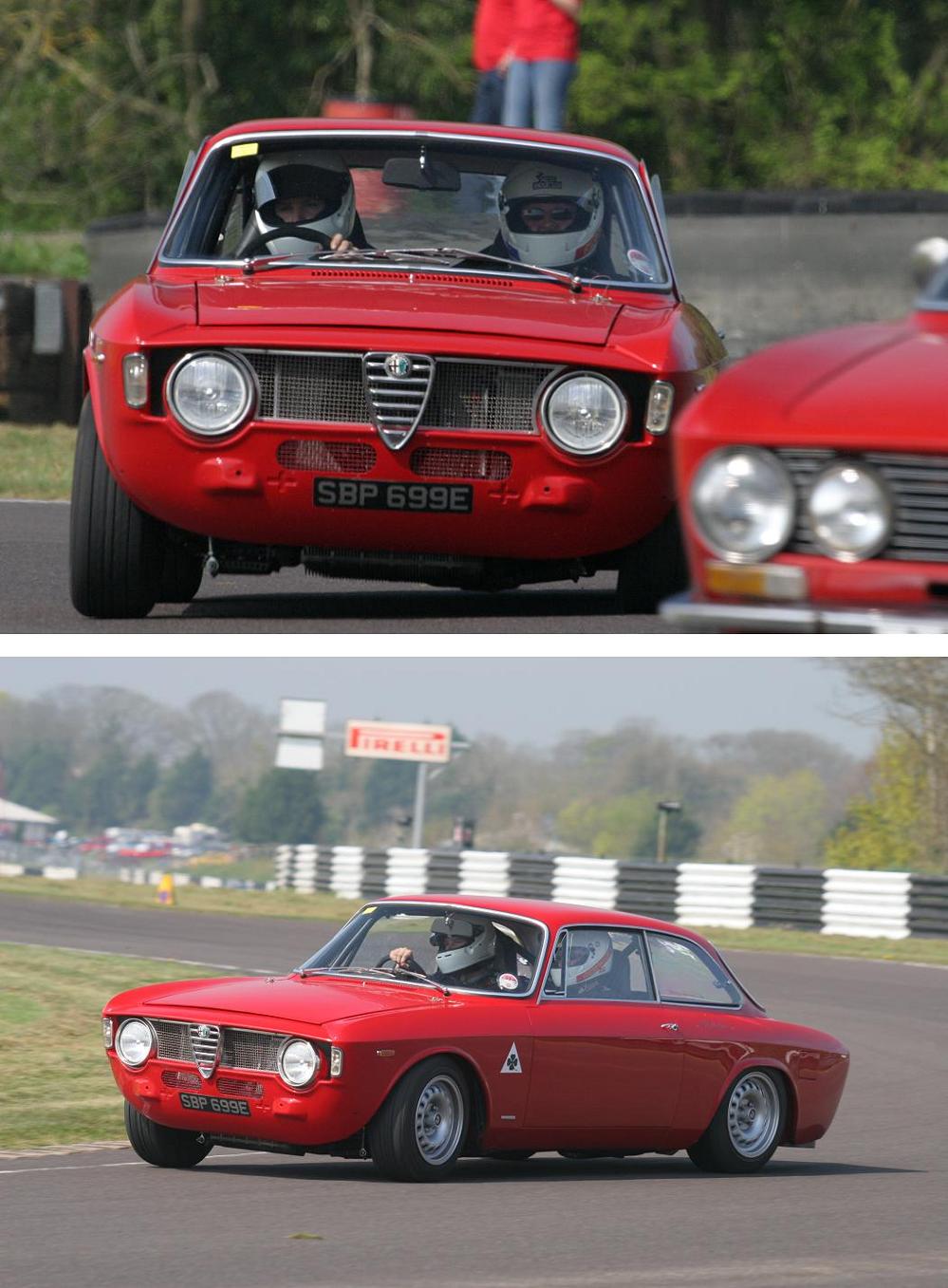 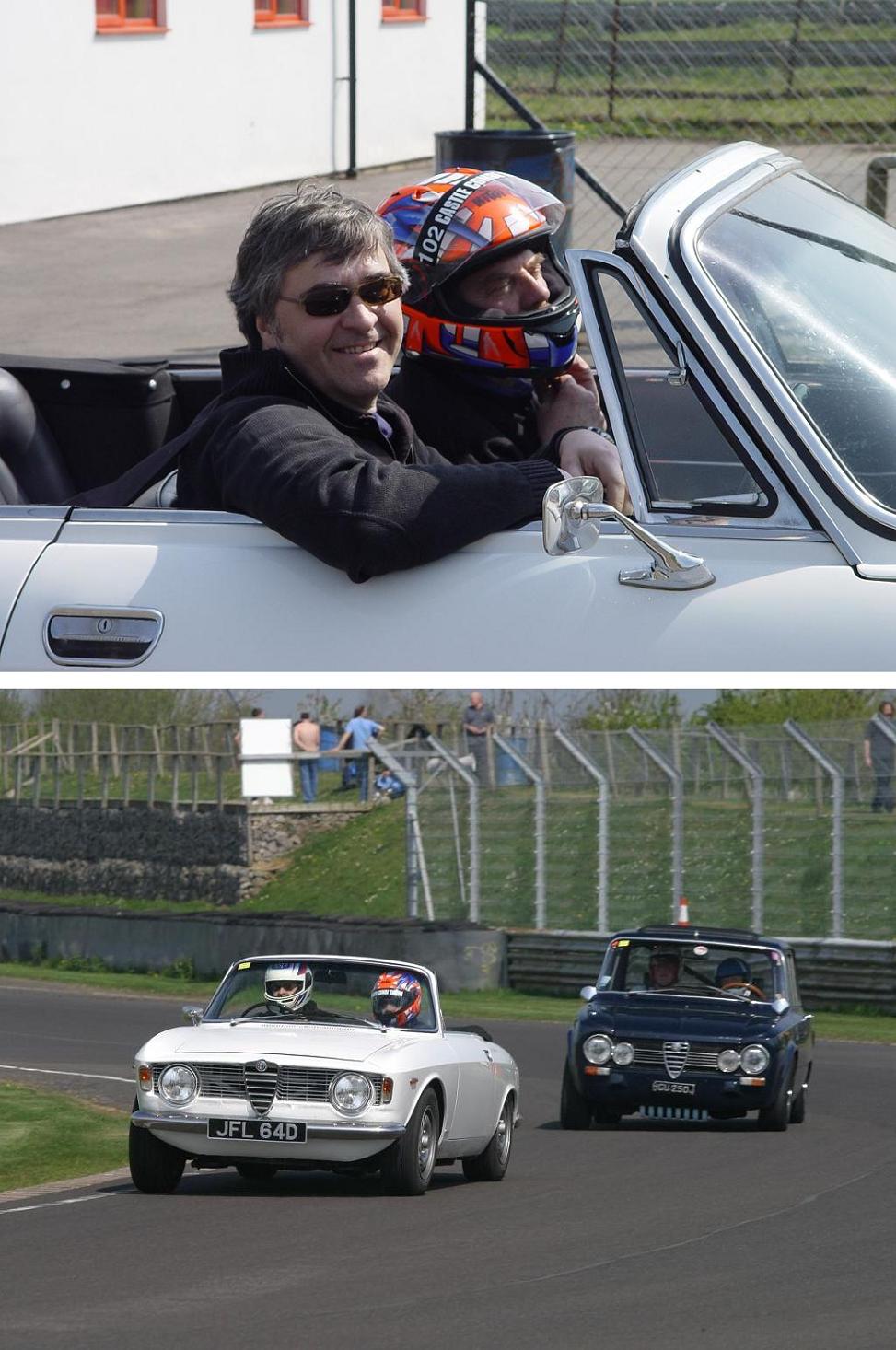 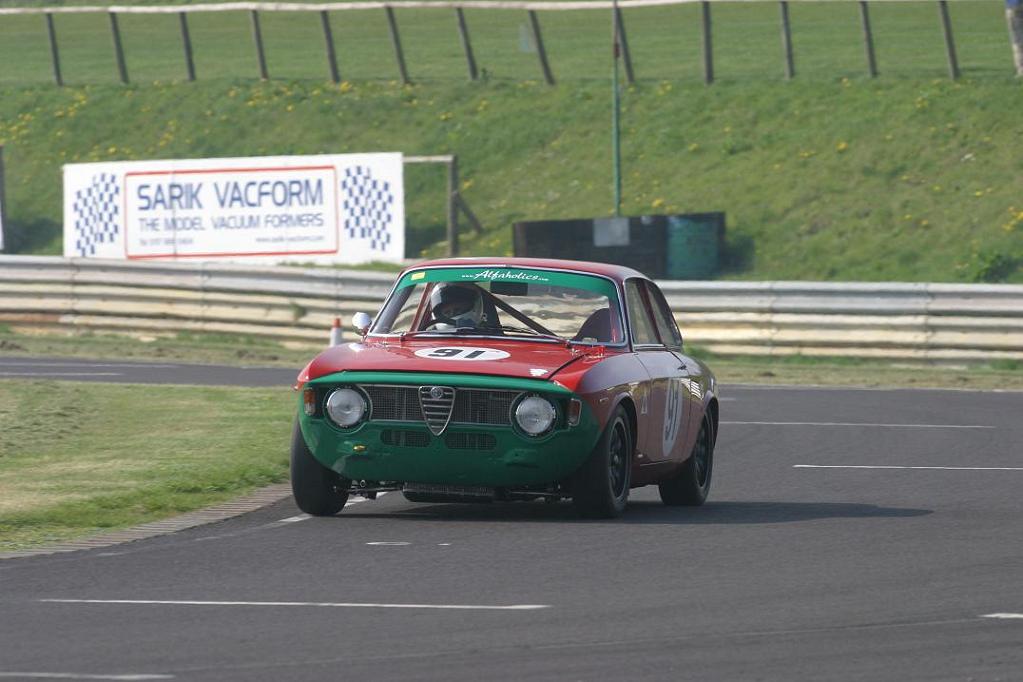 John Dobson leads John Symes and Charles Clegg through Avon Rise, as others head into Folly past the pits 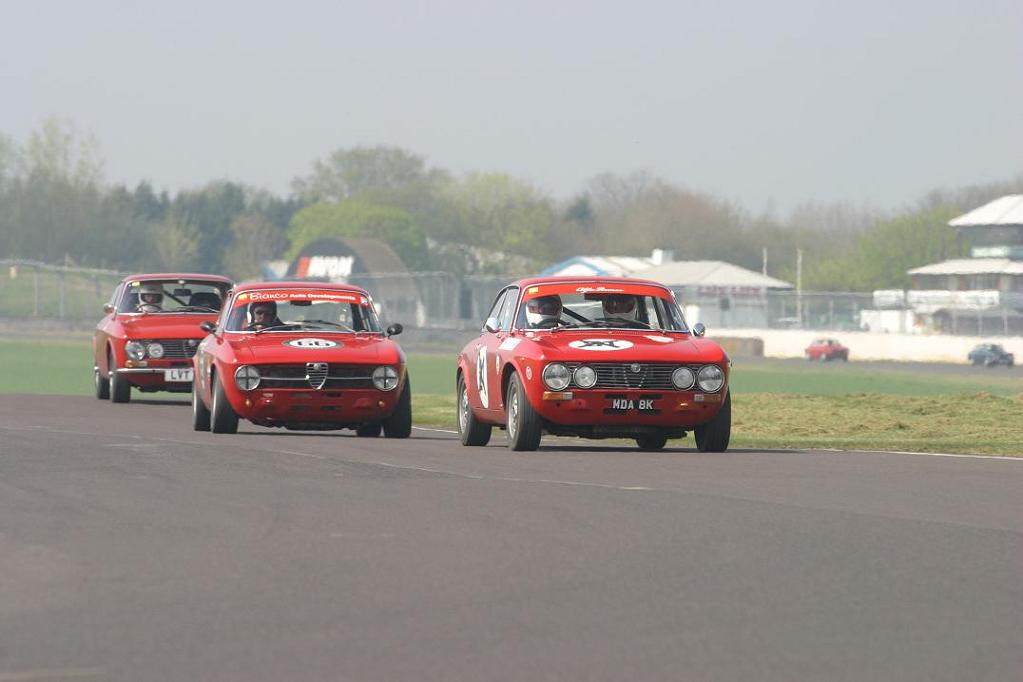 “Richard, Andrew, Max. Many thanks for organising yet another wonderful day out at Castle Combe. How you manage to fix the weather year in year out never ceases to amaze me” Dave Tyson

“Just a quick thanks from Tim Haynes and I for the fantastic day out yesterday. We both had a great time trying to wear his door handles out on the track surface. Once again, a brilliant event, well organised. Nice to see you all too! Roll on next April!”
Jim Spackman

“Dear Richard and family, just a quick email to thank you for the wonderful track day on Saturday. The track is such great fun especially for us ordinary drivers. The car went all day without missing a beat. Once again well done on a fantastic day out, met some great people too!” Michael Cotton

“Hi Max, Can’t thank you enough for the fantastic weekend we had! Loved it!
I had a blast unpacking all the boxes yesterday evening when I came home! …better have my car finished in time – so we can take it out on next year’s trackday ;-)”
Hans ten Hagen, The Netherlands

“Hi Max, Richard, Wanted to thank you for a great day out on Saturday, very informative and the time out in the car quite a revelation, a real bonus on top of meeting you both. Looking forward to sorting out my car and getting the suspension underway, again many thanks for everything.” Bob Deeming, New Zealand

“Hi Max, Good to see you all at Combe and before/after – we had a great time. Cheers and thanks for another great track day” Richard Merrell

“Hello Max, I really enjoyed the Alfaholics track day at Castle Combe, I was lucky to be in the UK that weekend so I drove from Coventry to the track. Nice to see Alfas driven like there are supposed to, and what a nice track – I found my self dreaming of having my Alfa there and go at it!” Sergio Olivares, Dallas Texas, USA