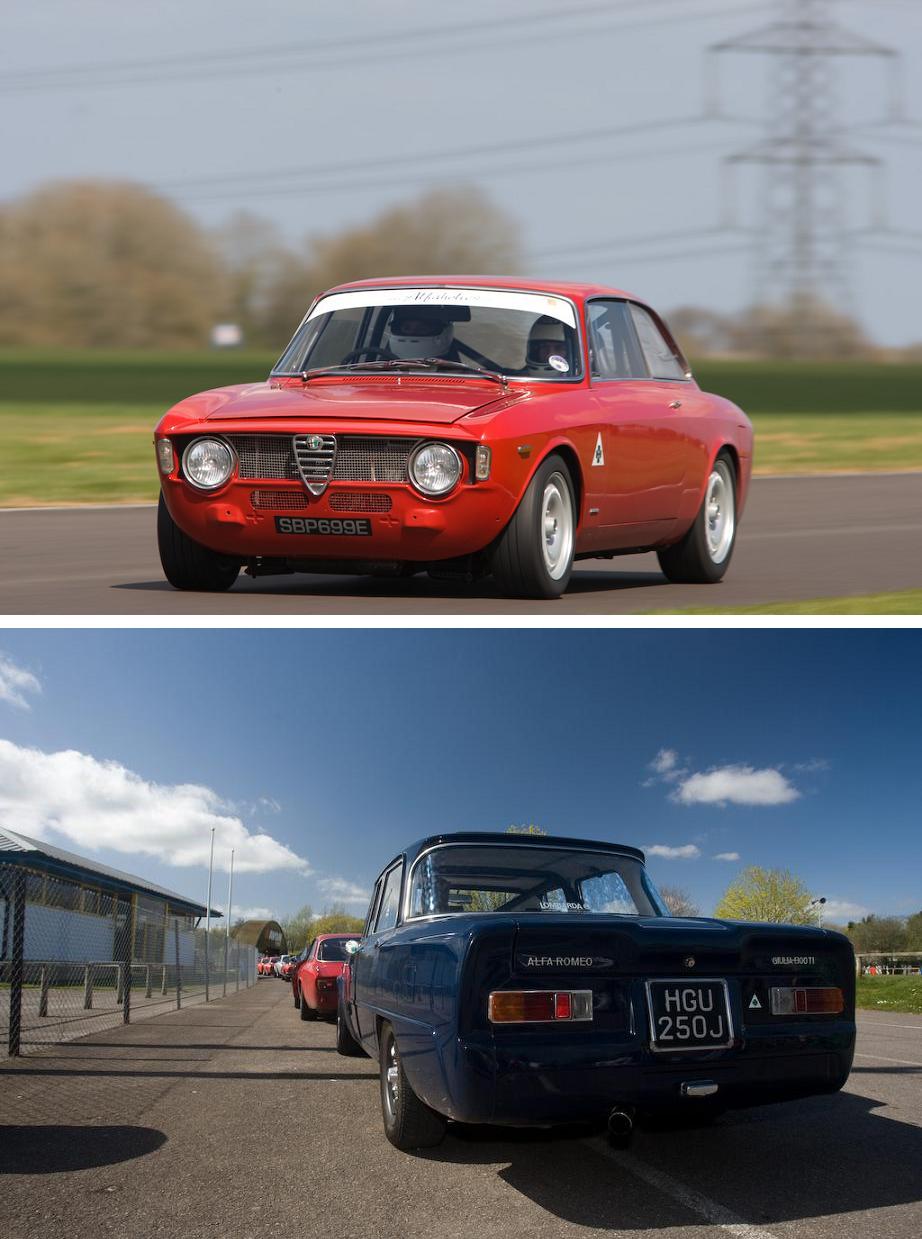 Our annual track day at Castle Combe was another huge success this year with our regulars back again, joined by a number of new faces, many of whom were trying their hand at a track day for the very first time under the expert guidance of our instructor. Others came from far and wide to join in what has become a global 105 festivity – special mention goes to Daron & Cyndi Walker of Vintage Customs, Seattle, Tom Lacosta from New York, Jim Fuller from Antigua, Hans Ten Hagen, Freek Veldhuizen and Dennis Rietveld from Holland and John Bennett from Scotland, all of whom flew in specially to attend our track day!

Friday was a very busy day at the Alfaholics warehouse – Daron & Cyndi Walker arrived to see our stores having just flown in from America, Jim Fuller arrived from Antigua to collect his freshly upgraded 2.0 Sprint GT HRSR race car, Arnoud van Leeuwen collected his Twin Spark GTA Replica with its new Watts link conversion fitted and Hans and his friends arrived from Holland to collect parts and drop off donor Twin Spark engines! After many hours of chatting all things Alfa Romeo, we headed into Bristol to check into the hotel before making our way to the obligatory Italian restaurant for dinner!

Daron & Cyndi Walker from Vintage Customs in Seattle came over especially for our trackday! Seen here with Andrew & Sara in the top photo and fascinating Dutch enthusiasts Hans ten Hagen and Arnoud van Leeuwen at the pre-trackday dinner in the bottom photo!

Just as last year, the weather forecast had everyone convinced we would be trying out a wet and slippery Castle Combe for the first time at our track day. However, come Saturday morning the rain had already passed through and the clouds cleared to leave sunny blue skies for the rest of the day, resulting in many pink faces!

The day was a complete sell-out once again, with a superb mix of cars ranging from standard road cars to full blown racers. Most were 105 coupes including two race-prepared 1600 GTAs and a handful of Giulia saloons and Spiders and a Giulietta SZ. The paddock was filled with spectators, many of whom were enthusiasts who had arrived in smart modern Alfas in order to enjoy the sunshine and soak up the atmosphere.

Tom Lacosta flew in from New York to shake down his recently aquired FIA GTA race car (top), Jim Fuller flew in from Antigua to test his Alfaholics prepared HRSR Sprint GT Racer prior to another season’s racing (bottom) 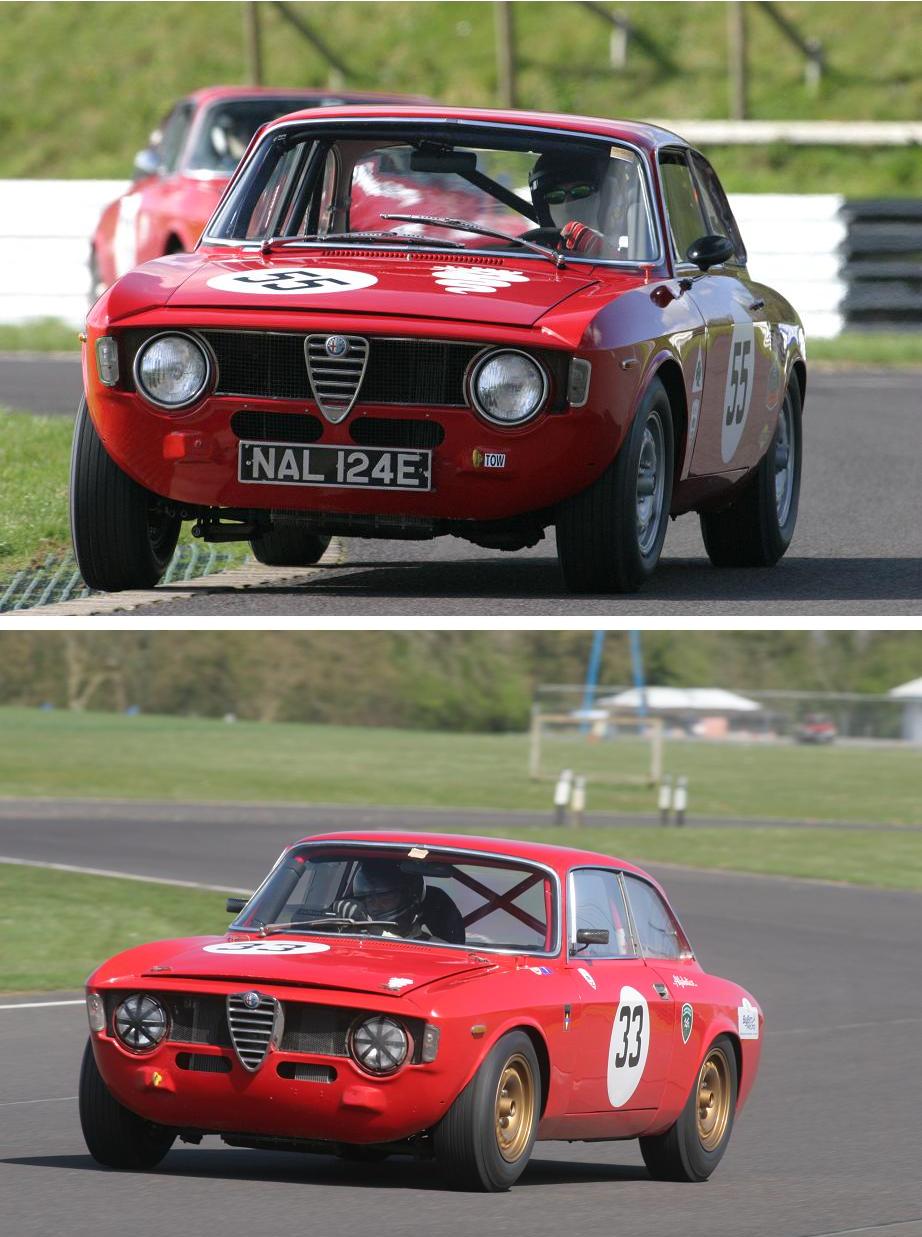 Our instructor Erling Jensen enjoyed his time in the passenger seat (top), the Featherstones returned again with a fleet of their 105s! (bottom) 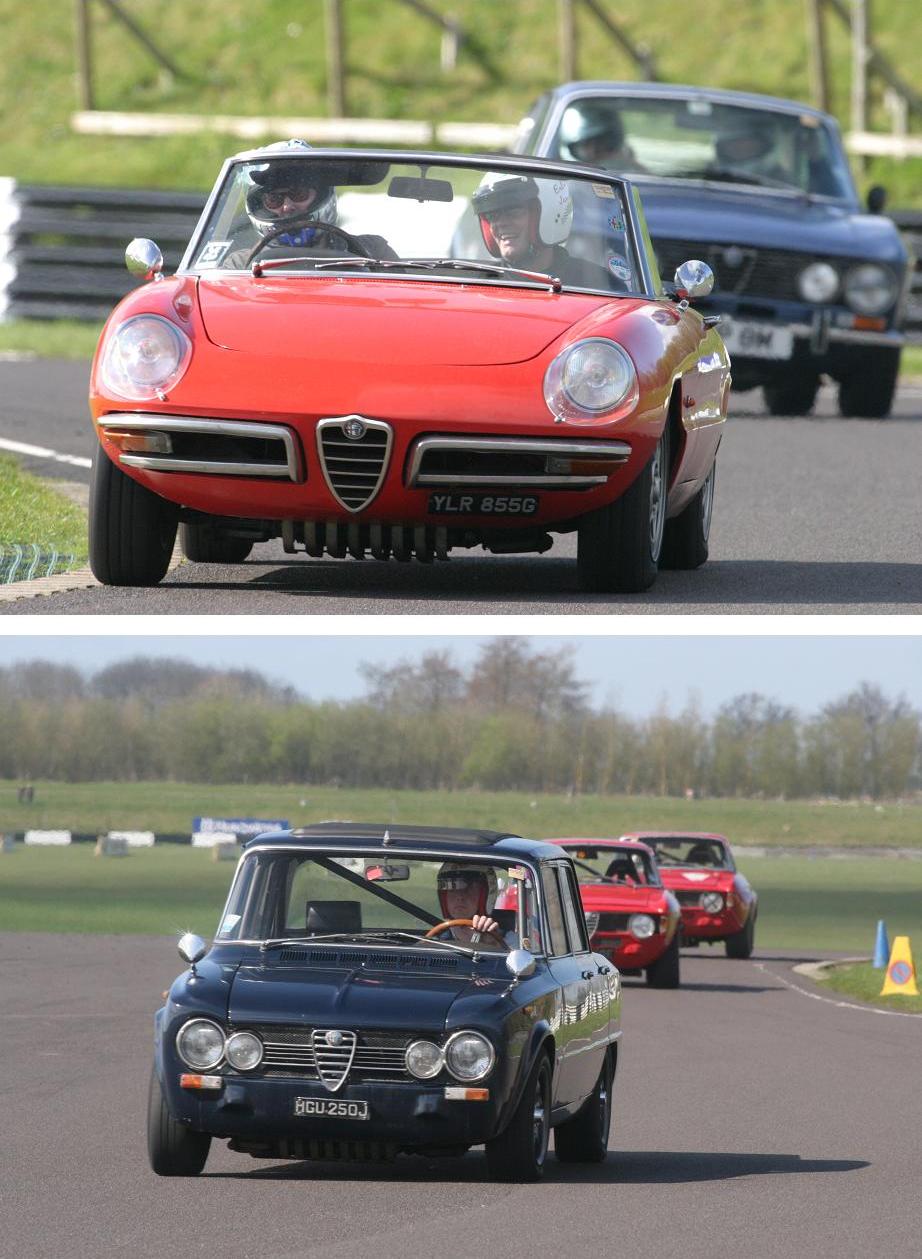 With 12 cars allowed on the circuit at once, everyone was guaranteed plenty of track time and it was clear from the first morning session that everybody was determined to make the most of it! The lunchtime break allowed drivers to have a well-earned rest and a bite to eat in the Tavern Restaurant. It has become a tradition to run a lunchtime parade in order to provide an opportunity for those driving both classic and modern Alfas to experience the circuit. This year was our most popular yet with over 60 cars taking part, showing the tremendous support and enthusiasm among those not directly taking part in the track day!

As usual the afternoon sessions flew by and, before we knew it, the chequered flag was waved on the last session and the action was over for another year, but not before an excellent dinner at the local Salutation Inn to relate the day’s activities. A huge thank you from all the Alfaholics team to everyone who took part and helped to make the day such a great success – we look forward to seeing you all again next year! 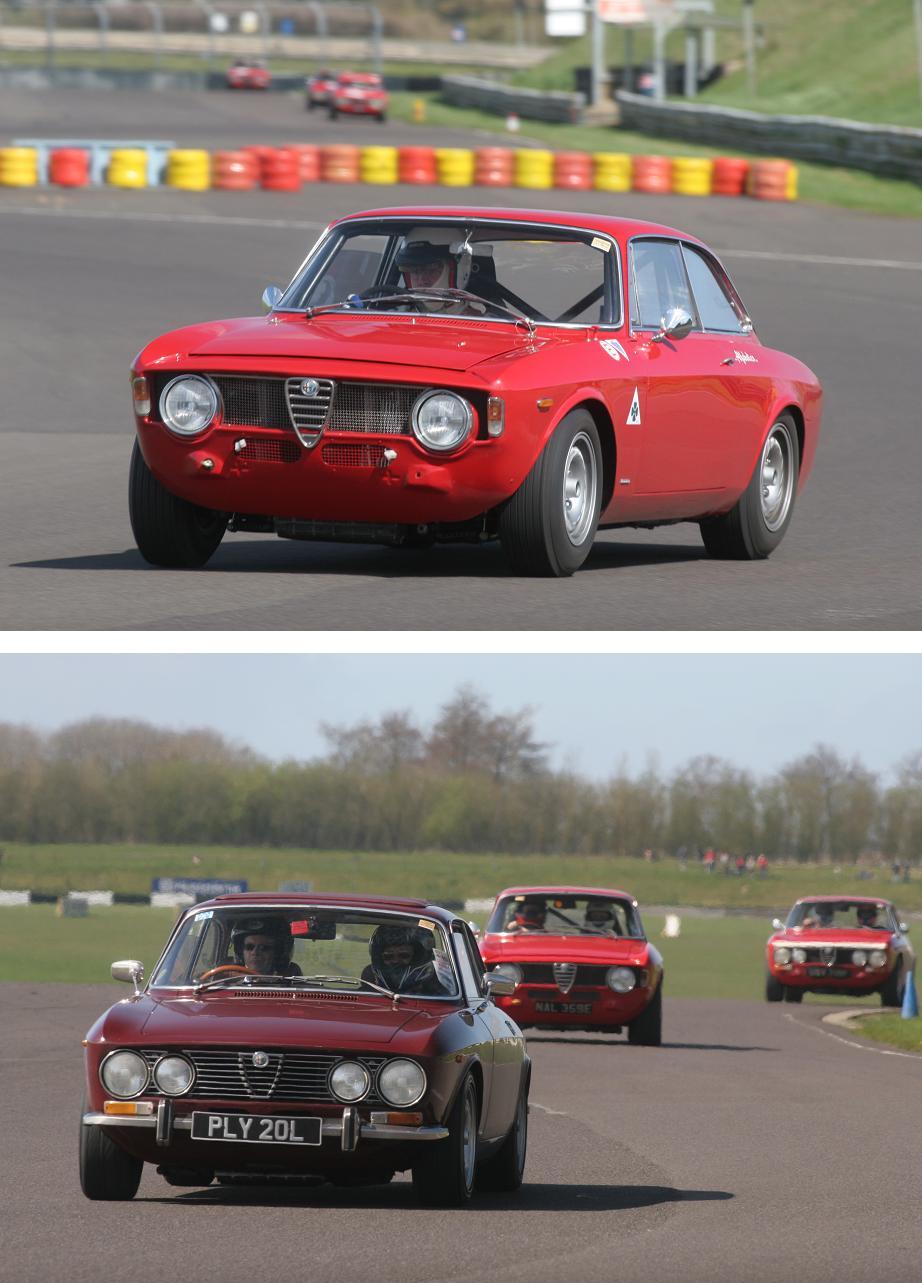 The lunchtime parade was a huge success with over 60 Alfas of all ages taking part in the session! 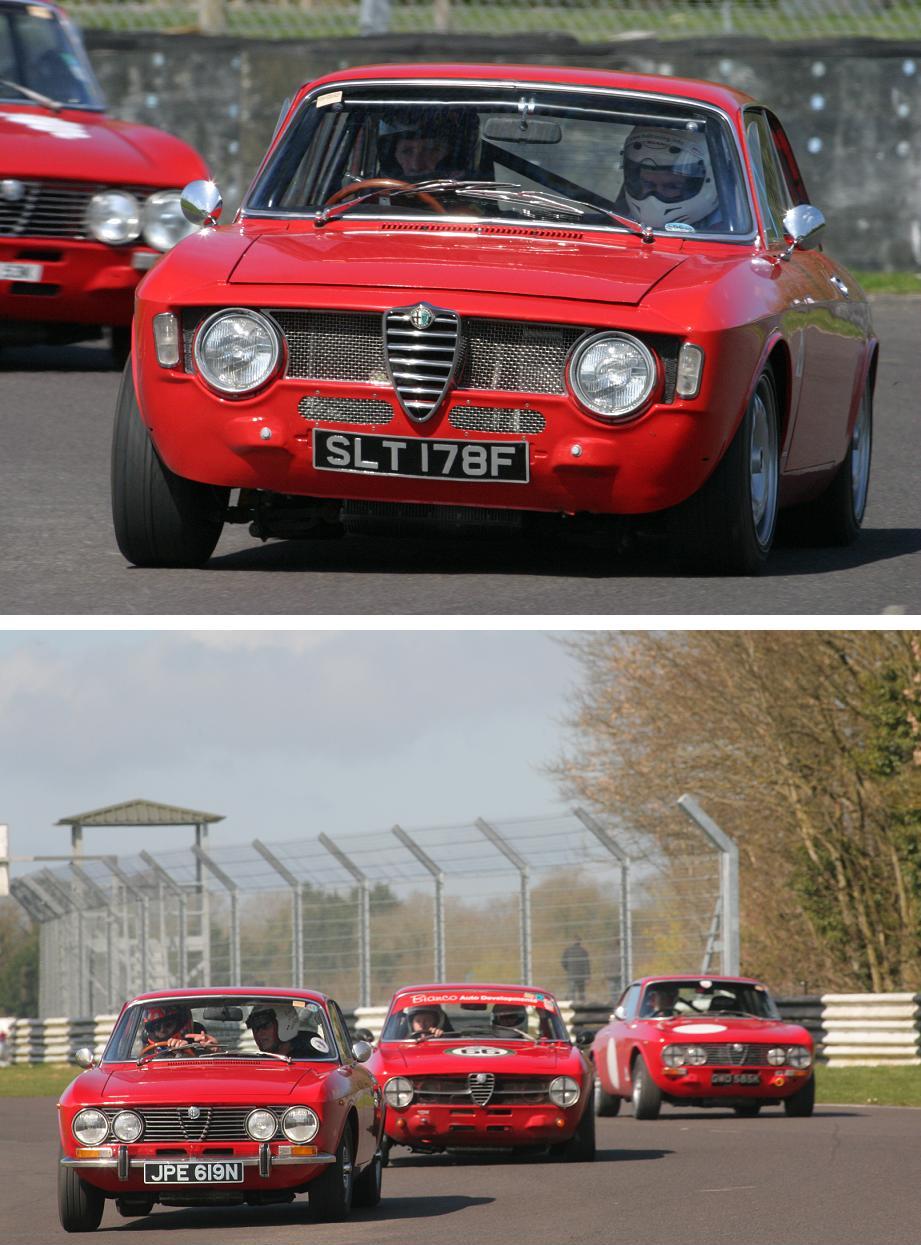 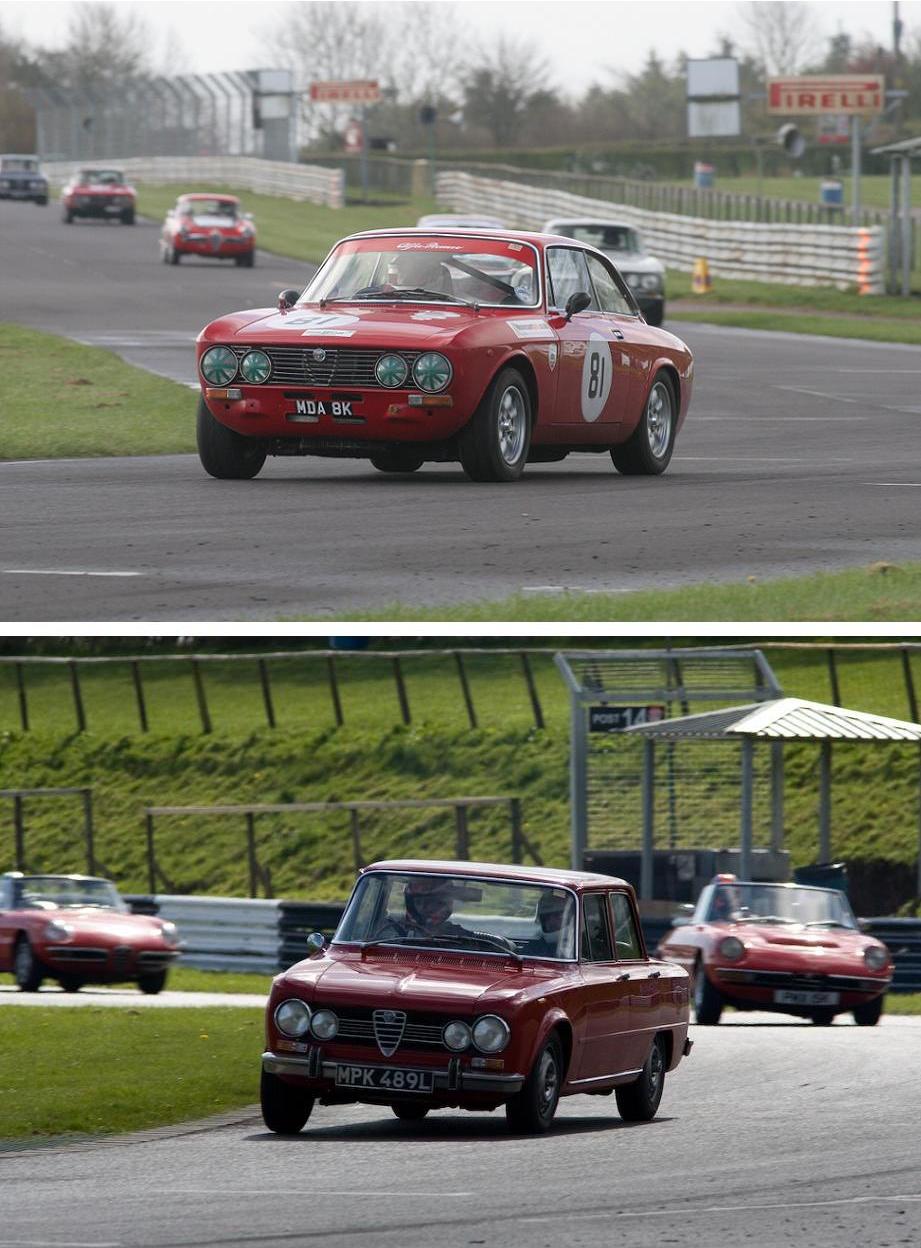