Rain forecast for the Alfaholics trackday? Had our lucky streak finally come to an end? Was it really going to be wet? The forecast must be wrong, surely it couldn’t be wet? Rumor was rife in the days leading up the 7th Spring Alfaholics Trackday @ Castle Combe. Dinner on the evening before the trackday was held at Marco’s Italian Restaurant in central Bristol. Dominic Gulotti, looked a little concerned sipping away at his pint, he had a good right to be; a trackday virgin, driven all the way from Switzerland in his newly acquired Giulia Super. “A Giulia Super?” I hear you say …a 3.0 V6 Giulia Super on semi slicks to be more precise, that could be exciting! The pre-trackday dinner had a great turn out, 7 cars in total made the trip from Holland, including Patrick Franken for the second year running. Having whetted his appetite last year in his road 2.0 Giulia Ti, he returned this year with his freshly prepared ex-Squadra Bianca Giulia Super race car. Richard Merrell also made it down from Inverness, Scotland, a longer trip than all bar the Swiss! Locals Ian Williams and Peter Lovegrove joined in, along with Arnoud van Leeuwen and Nick Lyon from London for the full ‘Trackday Weekend’ experience with added linguini and Parmesan! 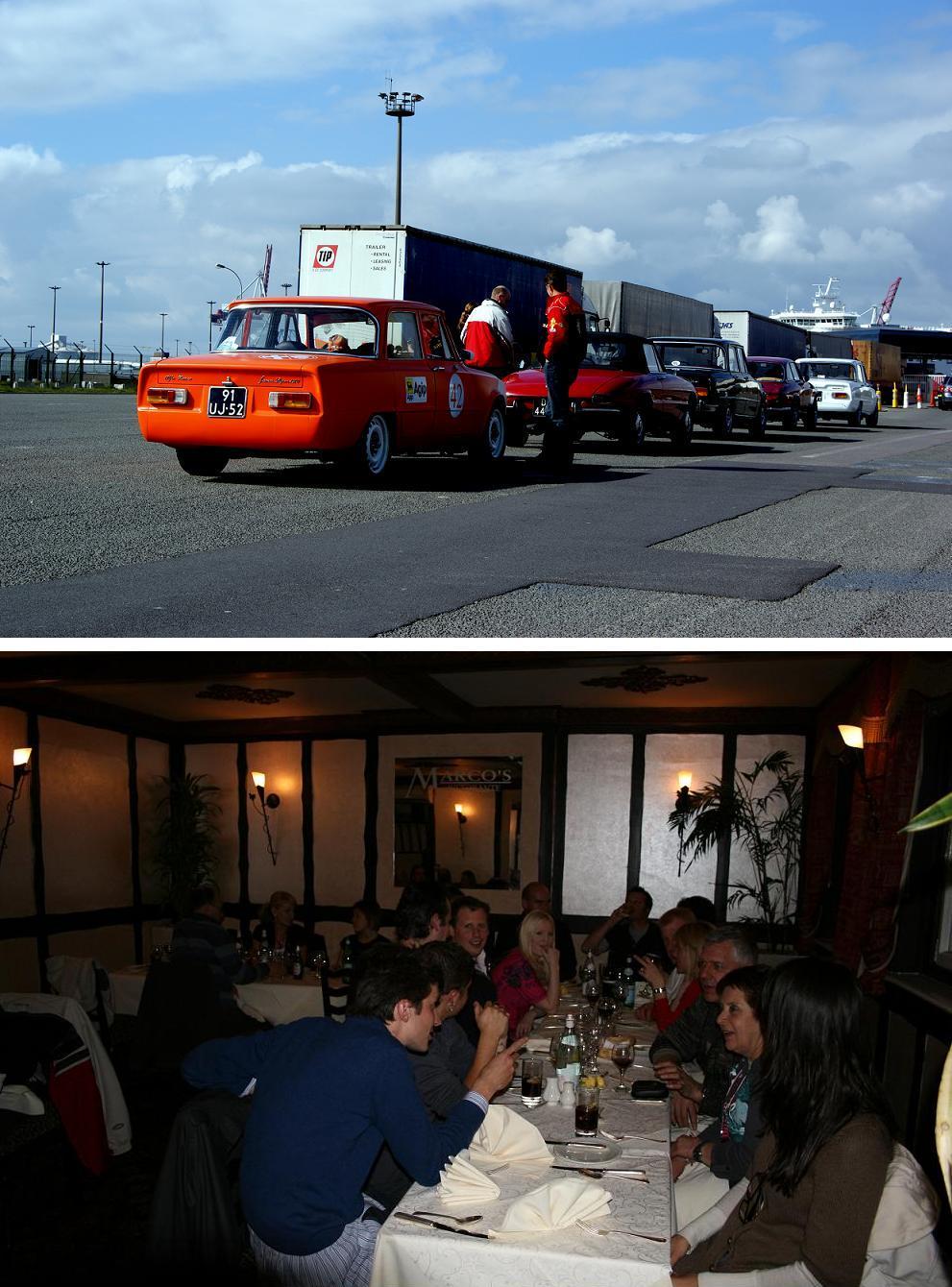 In the Novotel car park at 7:30am it certainly didn’t look great for the day, heavy clouds and wet roads. With intermittent rain on arrival at the circuit, even I nearly conceded defeat this year! Ye of little faith, this is the Alfaholics trackday after all! With 3 greasy damp sessions and several pirouettes completed (Gold medal to Michael Cotton), the sun burst through and the track dried in no time at all, by the end of the day there was even evidence of some sun tans! Business as usual then!

Giulias plentiful this year! Dominic Gulotti looks a little nervous in the passenger seat of his 3.0 V6 Giulia in the wet!(Top) Patrick Franken deep in conversation with Ian Williams waiting for the track to dry!(bottom) 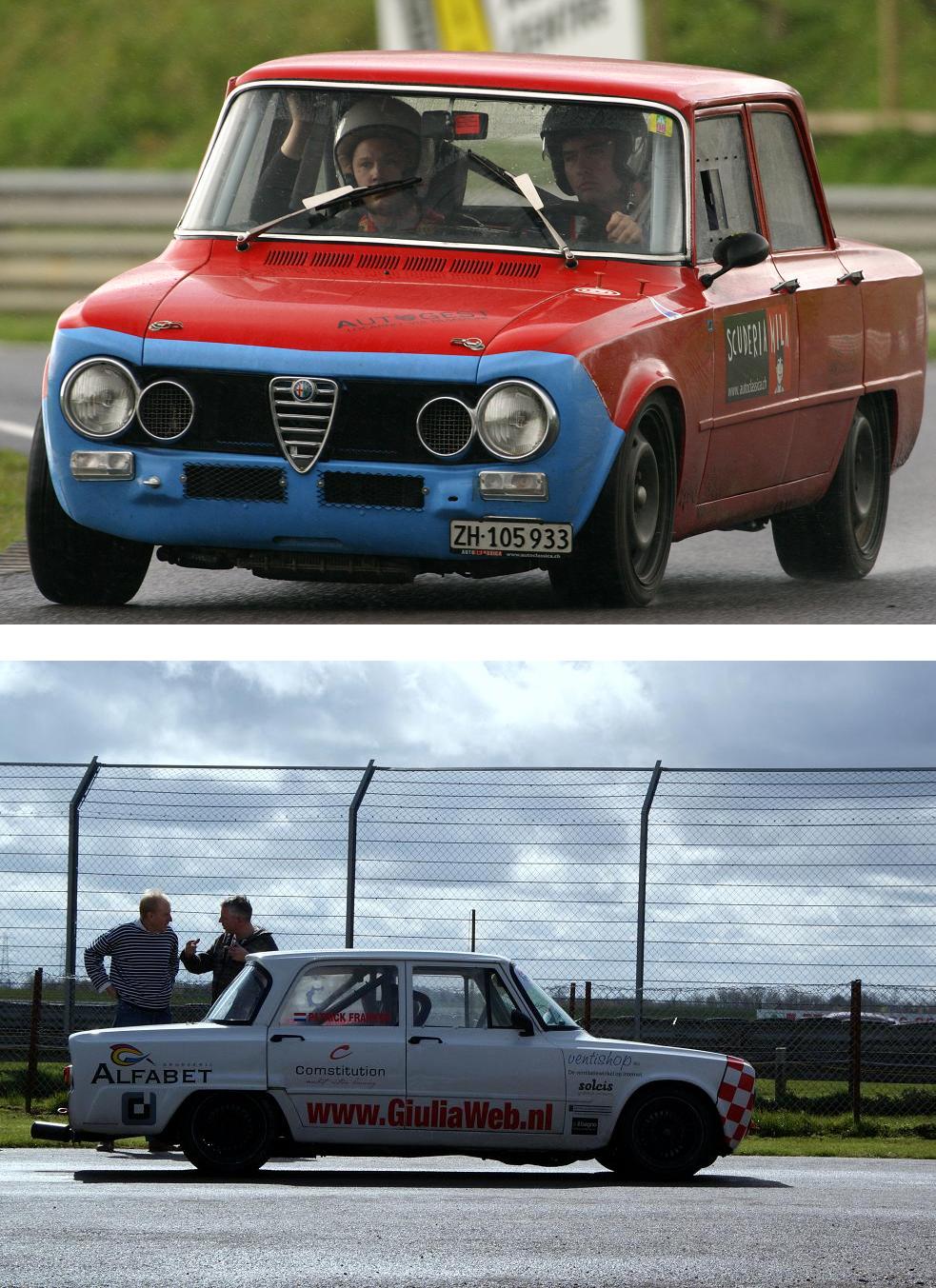 We had a fabulous mix of cars again this year, a sprinking of Spiders amongst a sea of burbling GTVs, GTA Replicas, GTAm Replicas and a healthy number of Giulias. Special treat this year was John Bennett’s beautiful, original Ti Super race car, with many admiring onlookers, it ticked the majority of boxes of ‘most wanted’ car present at the trackday! The recent energy and excitement in the market for our 4-door friend was clear to see, although I think the Dutch, always 4 door fans, thought we were all a little slow on the uptake!

It was great to see so many regulars returning for another enjoyable thrash round our one of our favourite circuits Castle Combe, as well as a pleasing number of fresh faces, many with newly built, Alfaholics equipped touring/trackday cars, Mark Haddon Jones and Peter Lovegrove to name but a few. Arnoud van Leeuwen, the English Dutchman, returned once again with his even more tweeked and sorted GT Junior Allergerita, this year sporting amongst other things our new 15″ Superleggera rims, front geometry package and Rally fuel tank conversion. 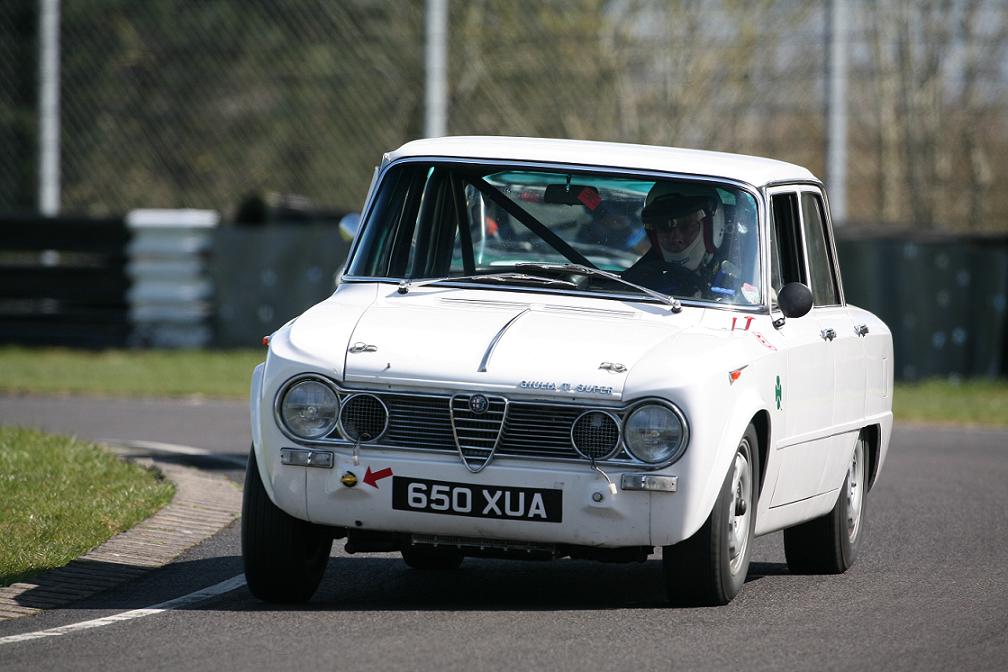 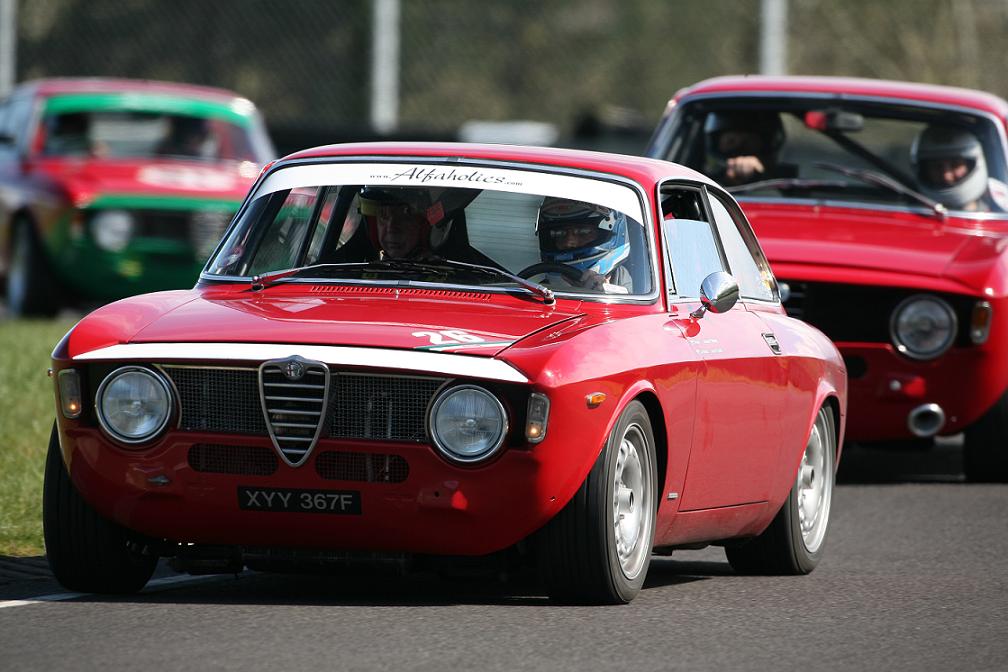 Another group of cars head out on track for another session 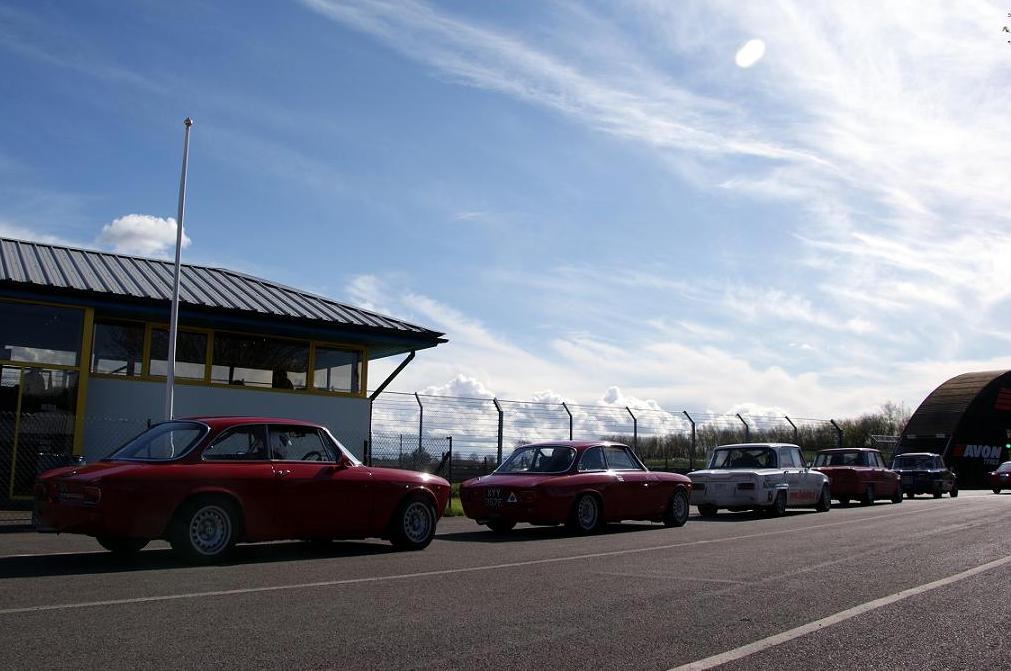 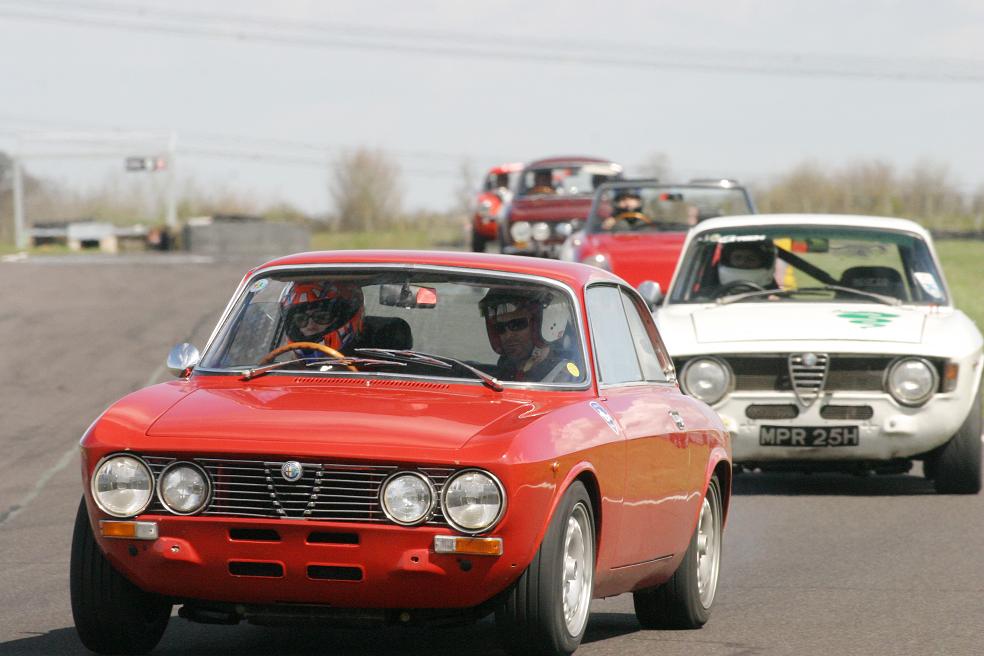 Paul Featherstone returned again with a fleet of cars including his newly Alfaholics Twin Spark’d Sprint GTV, here he enters Quarry ahead of his brother! 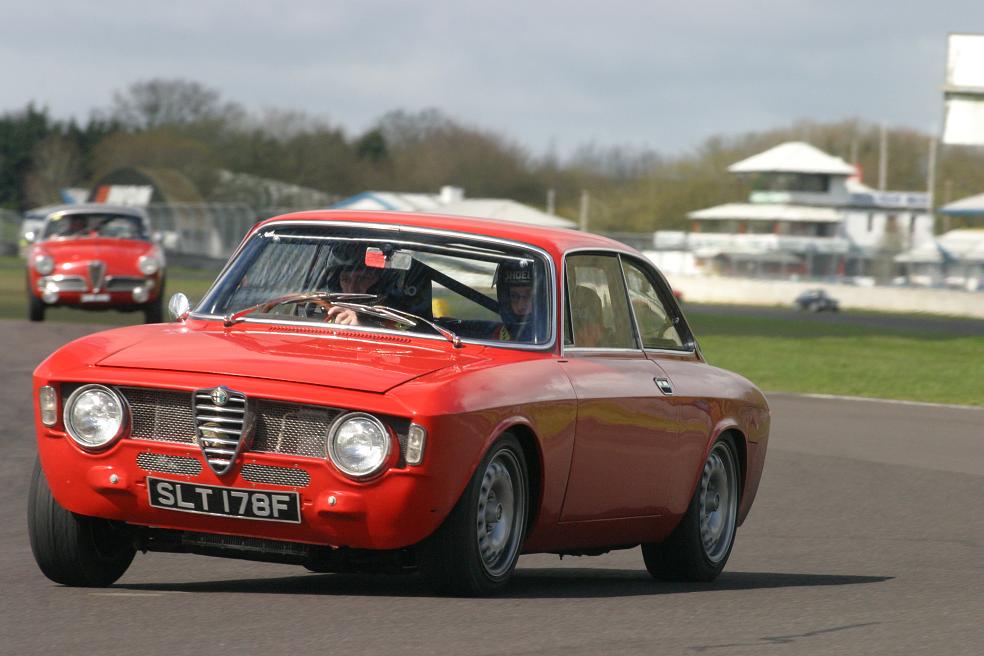 As usual, there was as much paddock banter and checking each others cars out as there was driving and before we knew it, it was lunchtime! The lunchtime parade allowed the large number of people who had come to spectate in Alfas of all ages to have a go round the track, whilst the trackdayers refueled their stomachs in the Tavern Restaurant, the catering as superb as ever.

Jim Gaisford snapped away behind his lens all day, providing excellent photos for people to take away capturing their moments on track, as well as many of the excellent photos you see here in this report. Special mention also to Robin Schmitz who didn’t miss the opportunity on his trip over from Holland to take some superb shots for his photography business and again sampled in this report. 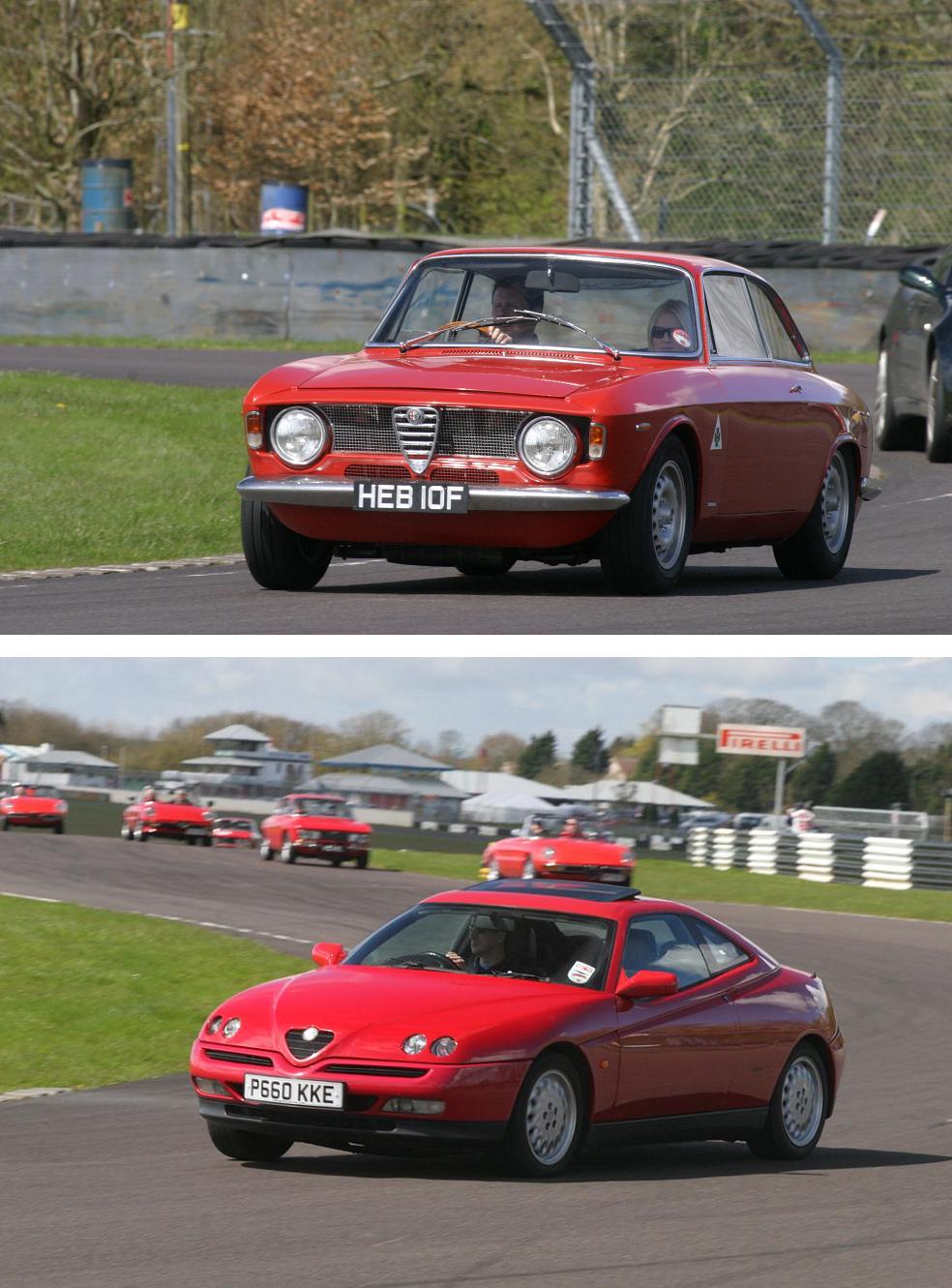 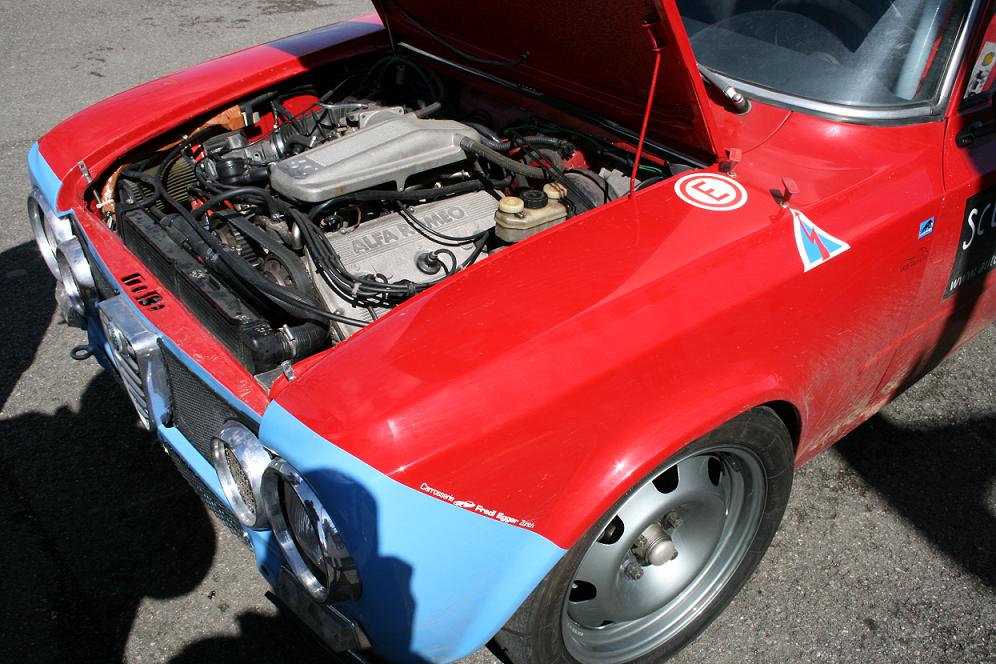 A good mix of race, trackday and completely standard cars were on track, Adam Burstow shakes down his newly aquired FIA Sprint GT, leading David Upshall in his standard 2000 GTV 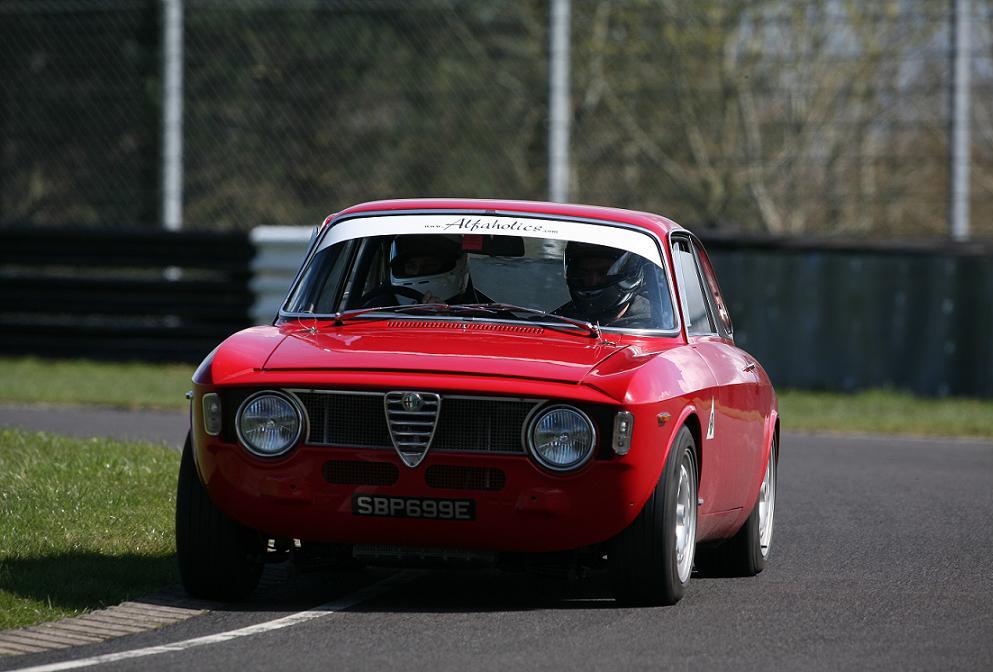 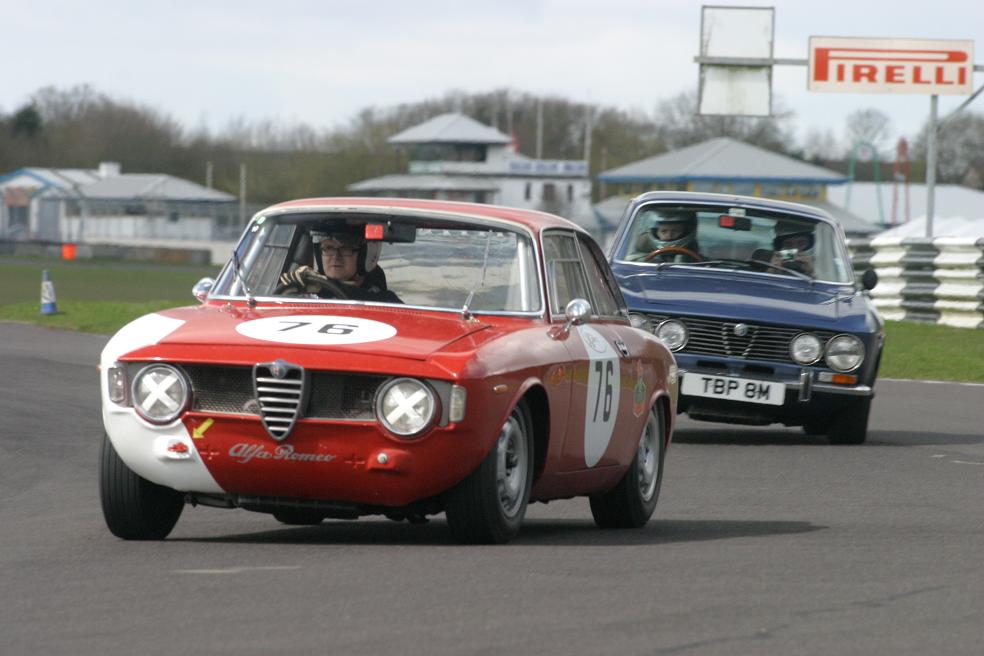 The afternoon session forged on with many passenger rides given in both ‘Works Cars’; the Alfaholics 2.0 Sprint GT Racer and Max’s GTA Replica. Sadly the afternoon disappeared just as quickly as the morning had and before we knew it, it was 5pm and the last track session got the chequered flag. With everyone packed up and having had a thoroughly enjoyable day, around 20 met up for dinner, as usual, at the excellent Salutation Inn near the circuit. Superb food to help digest the day’s activities, lubricated with local ales seemed like the perfect way to close a fabulous day. After dinner everyone went their separate ways, the hotel group returning to the Novotel for some ‘apres track’ in the bar until the early hours. The 3am closing of the hotel bar was not late enough for some, so a trip into central Bristol ensued to round the night/early morning off! The Dutch were all up early on Sunday to go home via Spring Alfaday, conveniently on the way home at Chatham Dockyard in Kent. Another superb Alfaholics trackday had come to a close for another year!

There was much talk all weekend about the Alfaholics trip to the Nurburgring this summer, this will be announced on the website in the coming weeks, but places will be limited so be sure to sign up early! 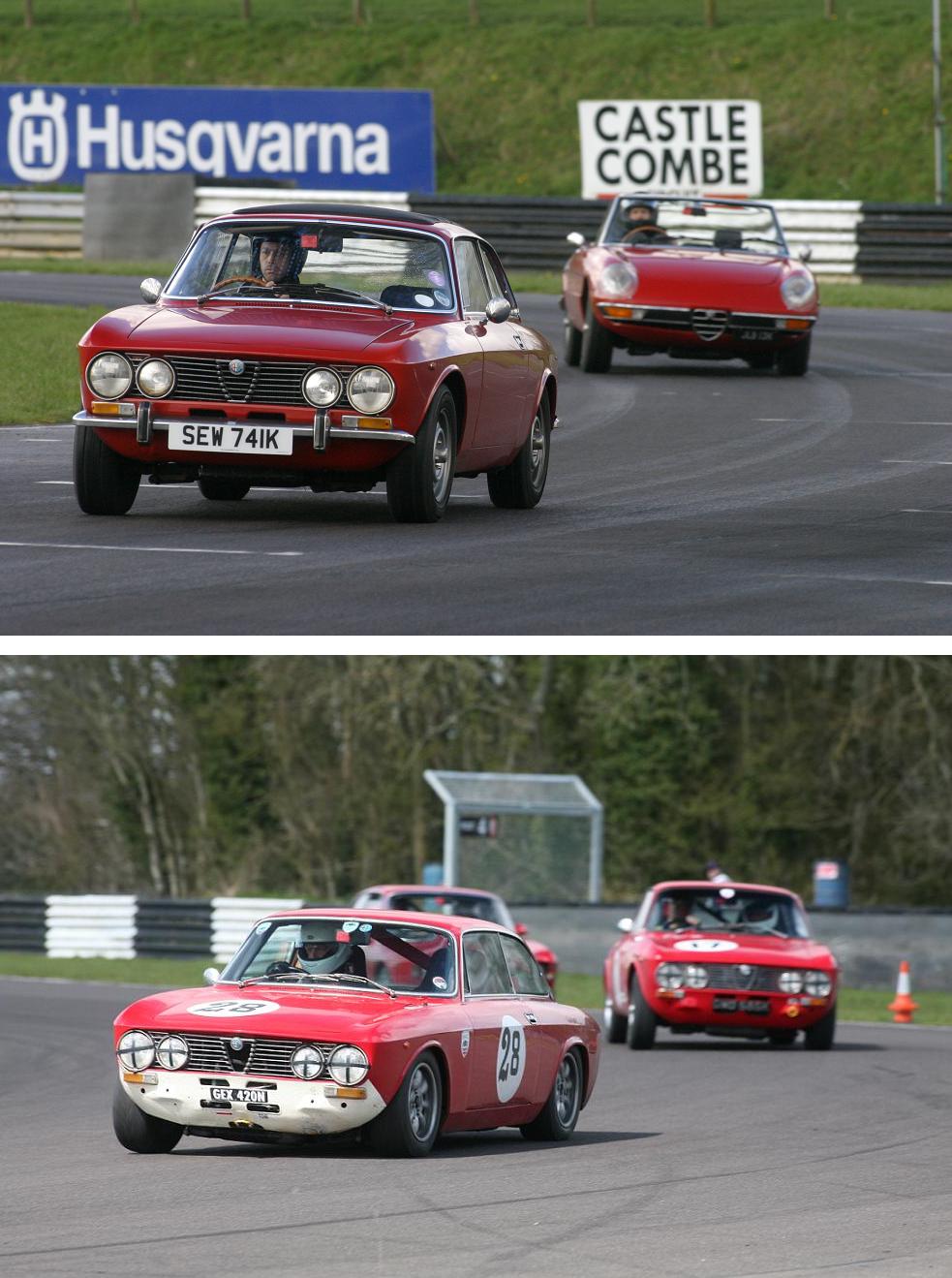 “Are we supposed to be going this fast?” Arnoud takes his girlfriend out for her first track experience 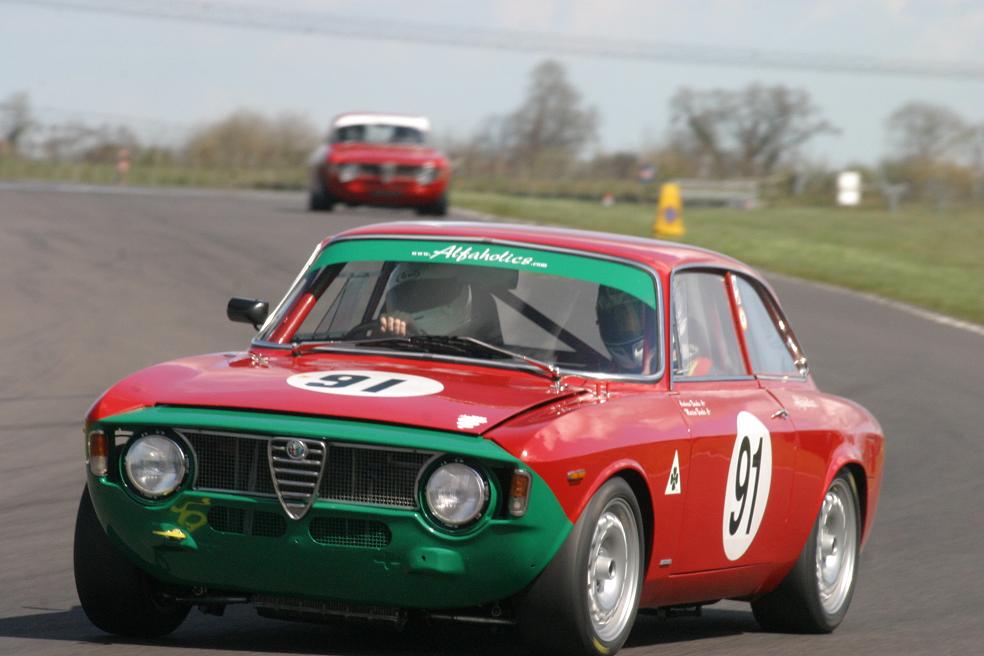 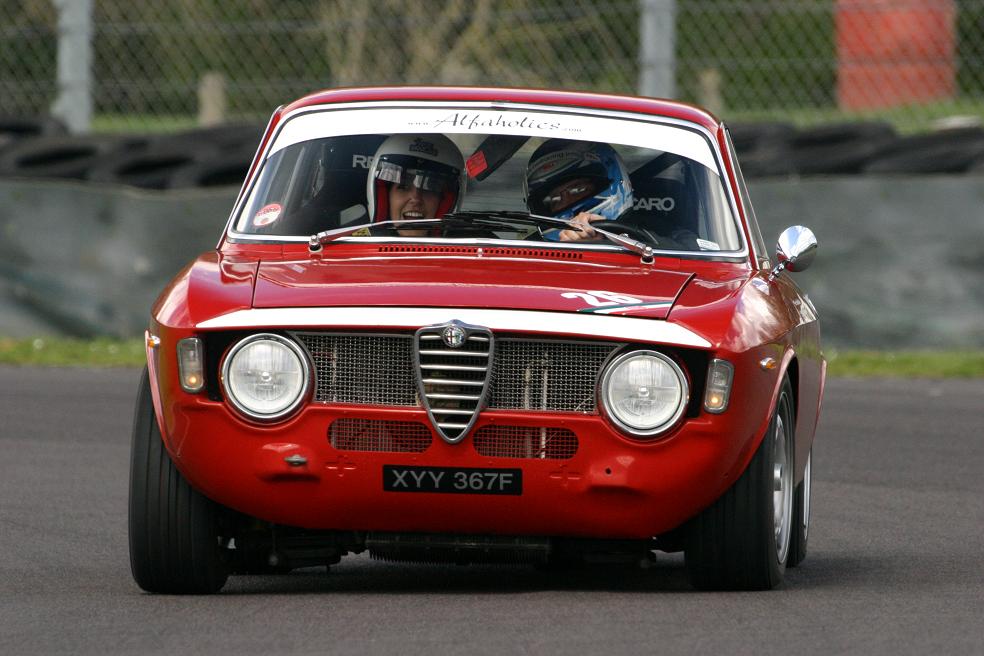 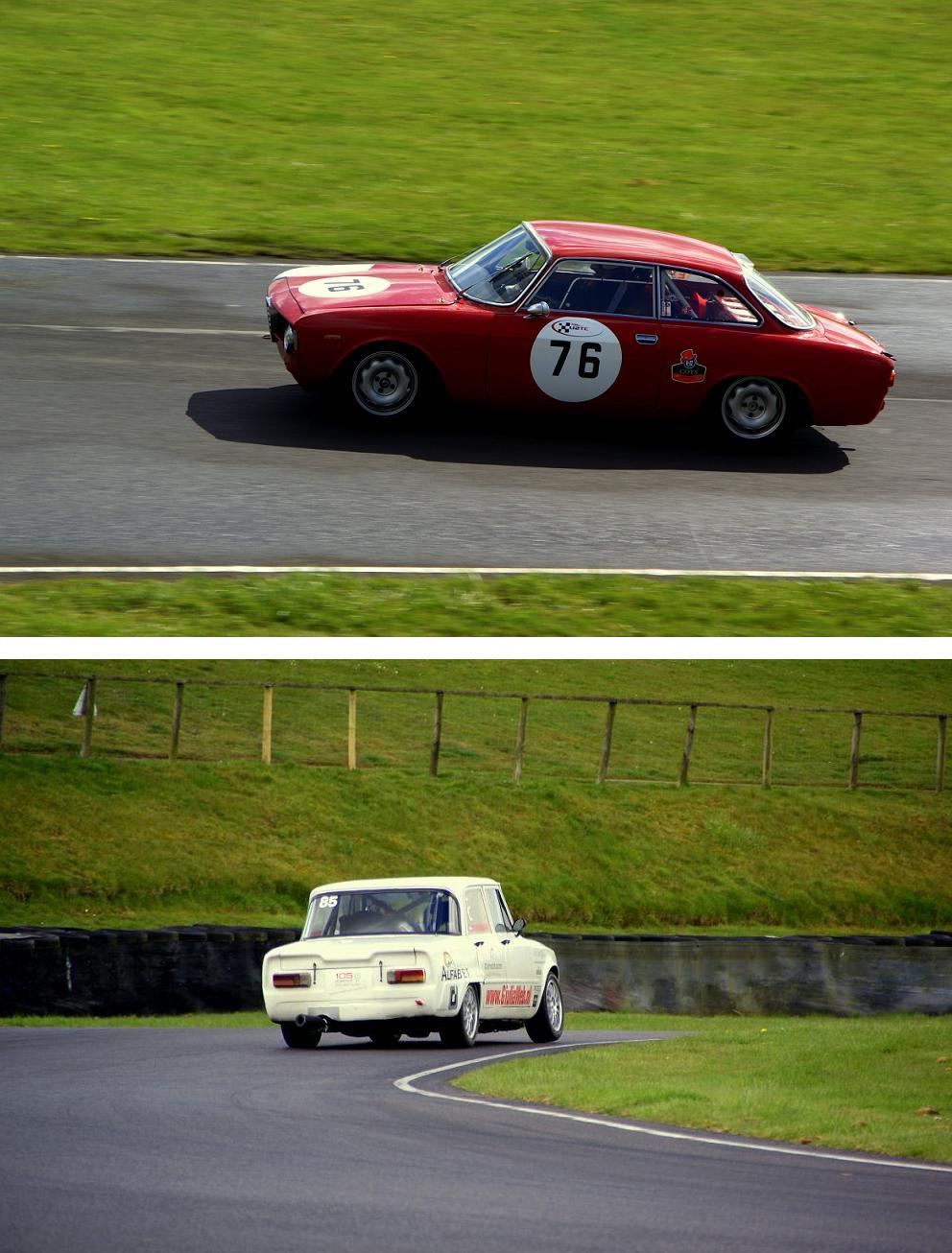 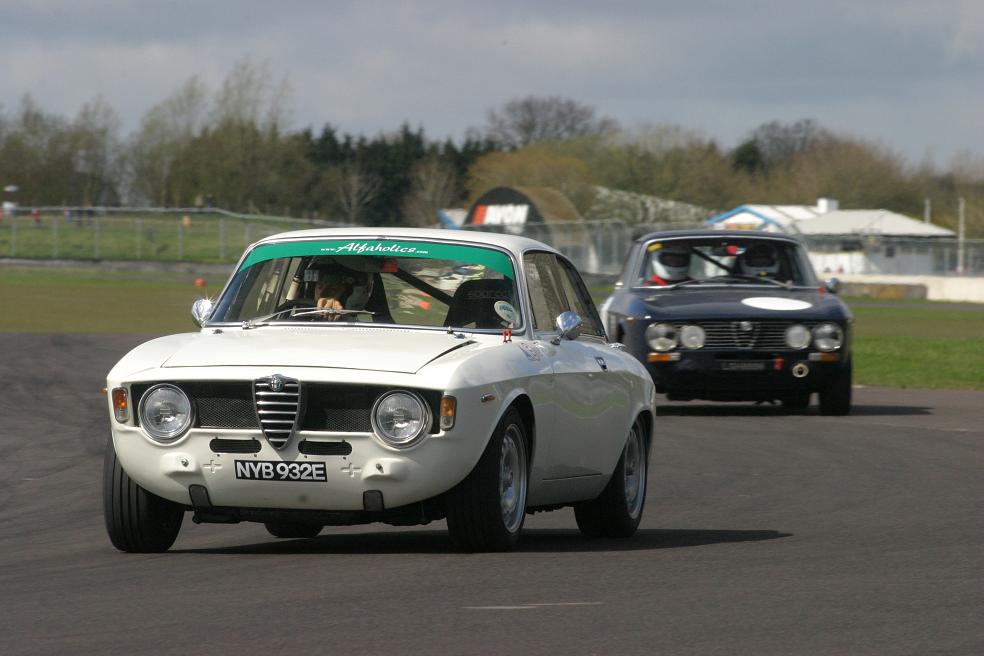