I’m not one of these people who thinks everything in the ‘60s was better but, in the case of Alfa Romeo, it is quite plainly the case. The cars of that era had an honesty of purpose that gave them a raw edge of satisfaction, even in quite humble form, that subsequent generations of Alfa never quite recaptured. They rusted, fell to bits in front of your eyes, but they were so great to drive we forgave them.

And has Alfa ever built anything as special as the classic Bertone 105-series coupes?

A well-bred blend of simple yet sophisticated components in a svelte, two-door body, these were mass-produced miniature exotics within the reach of a middle-class pocket.

Fans argue over which is the ultimate spec – the purity of the 1750 versus the torque of the 2000 – but if you’ve got the money then you may as well get something from the top shelf. The ‘special stuff’ as that scary butcher in The League of Gentlemen would have it. A GTA.

Without getting too bogged down in the history, the GTA was a homologation special – catalogued and sold to the public – that was built to allow Alfa’s Autodelta team to compete in the European Touring Car Championship. It dominated the series in the late ‘60s and the road cars are a kind of Holy Grail for Alfisti.

Production figures are hard to pin down. The history books say 493 of the 1600 version and a further 492 1300s but Alfa guru Richard Banks of Alfaholics has seen chassis numbers as high as 900 for the bigger engined car. Whatever, it was a rare and pricey car, half as much again as a contemporary E-type.

‘A’ stood for alleggerita, or lightened, and the car certainly was – to the tune of 603lb. This was mainly achieved by skinning the body in aluminium – everything bar the sills and the petrol flap – but the weight paring went much deeper. Sound deadening was ditched, the side windows were Plexiglass and the interior was simplified and lightened: even the little chrome strips on the door cards were thinner. 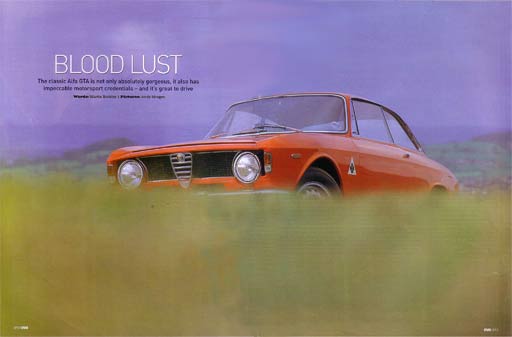 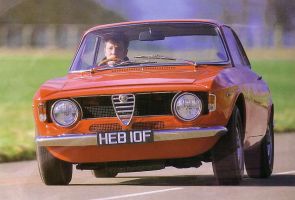 The relative familiarity of the shape tends to blind you to its beauty. From the side, the roof seems to float above the body on slender pillars. From the rear, the screen flows beautifully into a pinched tail. The front, with single headlamps and stepped bonnet, looks purposeful without being unduly aggressive.

Officially, Alfa built just 40 rhd 1600 GTAs and this car is one of them, property of Richard Banks who bought it from a Polish Spitfire pilot – the second owner – in the early ‘90s.‘It had been quite heavily crashed in Spain,’ says Richard, ‘and the engine and most of the other special GTA pieces had gone missing.’ After an epic restoration, Richard ran it with a twin-spark 75 engine for a while but has now returned it to its full original spec.

Embraced in the figure-hugging bucket seat, legs slightly splayed working floor-hinged pedals and stroking a slender wooden wheel, all feels right with the GTA even before you fire it up. The minimalist dash is less vulgar than in later cars and the cabin is filled with light.

Apart from the gobbling Weber 45s, it sounds much like any other twin-cam Alfa engine, but the big carbs put top-end power before low-end tractability. It suddenly shoves you in the back at 3000rpm, smoothes out and then keeps pulling vigorously to an indeterminate red line: it was only later Richard told me the engine had not yet done 1000 miles since a rebuild. The close ratios help you keep it on the boil and 115bhp in a car that weighs less than a Ford Anglia makes for urgent if not mind-blowing performance.

It’s the way the GTA deploys its power that makes it so special. It sizzles and fizzes with energy, continually inviting you to change down so you can hear its bark, feel it work for you. Not that you need much encouragement to use the gearchange. Sprouting from the bulkhead at a 45-degree angle, the unwieldy-looking mushroom-top lever slices through with an oily, mechanical precision you’ll find in very few modern cars. The actual movements of the lever are long but you can picture real cogs sliding into mesh rather than random pieces of rubber. The clutch is positive, medium weight and the throttles snap open and shut with a sharpness that rewards blipping as you come down through the gears. Every control – clutch, brakes, throttle, steering – has similar weighting, and the GTA seems to invite you to drive it well, in a precise but relaxed frame of mind: driving it poorly would somehow require a conscious effort. 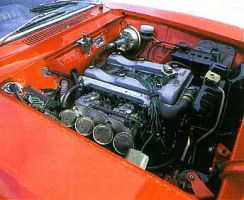 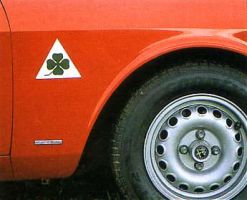 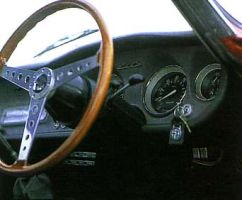 It’s hard to resist all the copy-writers’ clichés about the car becoming as one with the driver but as the GTA chatters back to you through your hands, your bottom and your feet it’s hard not to feel you are wearing this narrow, intimate little car rather than merely driving it.

Cornering is a delight. Richard Banks’ handling kit has banished the roll and understeer the steel-bodied 105 suffered in tighter turns so that the GTA, with its quicker steering, skips and dances through slow switchbacks with a light-footed aplomb nothing this side of an Elan could match.

Through faster, more open, third and fourth-gear corners it’s even better. How did Alfa contrive to make a mere steering box feed-back and weight-up so perfectly? How did they make a live rear axle behave so well? Somehow cupped in its balance point, you are privy to every nuance of its attitude as it settles into a corner.

Alfisti, a sometimes wearisome bunch of Italophile romancers, become moist-eyed and emotional at the mention of the 105 GTA. In this case the car is deserving of the adulation.

Whether the new 156 GTA is worthy enough to wear the same badge is another matter.