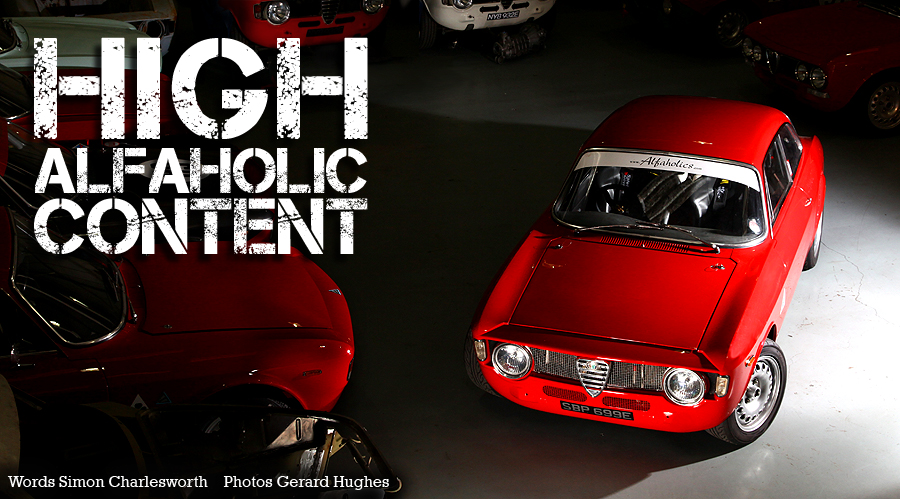 Simon and Garard originally came to do an article on us for Retro Cars magazine when we were still based in Devon and I had just completed the build of my GTA Replica. Now they have set up a superb on-line magazine called Dep-O and came to revisit Alfaholics to see what we have been up to int he last 5 years! Below is Simon's additional text from the July editorial of their magazine.

COMING AWAY from our Alfaholics visit, we stopped at a nearby pub – one which fortunately stocked proper glider and not the bottled variety coiffed by cider Philestines.

Thirst quenched, the philosophy started. “You know, £65,000 is an awful lot of money,” said Gez, before a pause and an exchange of glances that said, in pure unspoken bloke: ‘Yeah, but if you could, you bloody well would’.

There has been a quiet revolution happening in the classic world for some time now. We suppose you could call it the retroficaton of classics, whereby classic owners want to modify their cars to make them better whilst retaining their fun, immediacy and involvement.

Eagle E-types have been playing around with Jaguars for years, and Charlesworth won’t shut up about his track-time at the wheel of a superb RS Williams road-going lightweight 4.7-litre Aston Martin DB4 – a car which was too much for a ‘chooned’ Cayman S. To make the most of a performance orientated classic, you really have to go modified – whether it be something small like upgrading to an alternator, fitting electronic ignition and radial tyres or undertaking fundamental modifications to its suspension and engine internals.

Alfaholics understands this and this is why they’ve created their GTA Replica. A car which packs a truly droolsome specification and which we can’t wait to have a go in. A standard Giulia Sprint GT is a cracking car, so what better way to celebrate Alfa's 100th?

Even if you don’t get all starry-eyed at the allure of Alfa Romeos, the appeal of an as-new classic which can lap the Nordschleife in sub 9 minutes must strike home at some level. If you have a pulse. However, to fully-blown Alfisti such as us, these Alfaholics GTAs, promise so much more because, they make everything else old and new just look a touch Tommy Try-Hard.

OK, you might find a nice-ish but standard Dino 246GT, but someone will have probably stuck Ferrari badges on it. How about a mint Big Healey? You’ll need another barrowful of notes just to make it go and handle better so that it won't be humiliated by a midly tuned Spridget. Or you could buy a new-ish Porsche and look like every other city boy who fancies himself in a first gear sprint up the Kings Road. An Alfa Romeo GTA though, is, to us, one of the coolest most beautiful cars that money can, buy regardless of age.

So combine that with what promises to be some real kick-arse performance cultivated via superbly engineered parts ‘made in Britain’ and just where is the down side?

Hell, if you even compare it to the price of a fully-fettled performance classic – like, say, the aforementioned Eagle E-type – it even looks damn good value too.

And no, that’s not the cider talking.